The Catlins region of Otago is a beautiful, though wild, place. It has a fascinating history where hardy humans had to adapt their lifestyle to succeed against the challenging southern coast environment, writes John Morton.

Today, it is no longer a sleepy, dusty corner of the country: the main road is now fully sealed, and camper vans seek out the many tourist gems on a daily basis.

Put your foot to the accelerator and you could roar through the district in a short day, but to do so would be a travesty. My advice is to slow down, smell the sea, walk in the bush, listen to the birds, and admire the coastal wildlife.

Recently, I took my own advice and spent a few days with my wife, parked up in the caravan at Pounawea Camping Ground, located on the edge of the Pounawea Estuary, close to the Catlins main town Owaka. The Pounawea Estuary is downstream of Catlins Lake and is a melting pot of sea and the lower Catlins and Owaka Rivers. At high tide it is immense in size, but at low tide shrinks enormously. The word Pounawea means ‘meeting place of water’, and the name is very apt. Native bush comes down right to the shoreline and provides a great habitat for native wildlife.

The camping ground literature promised birdlife and, wow, did it preach the truth. Over our stay we were visited hourly by cheeky tui, bellbirds, and wood pigeons, while out on the estuary flats were feeding royal spoonbill, bar-tailed godwits and spotted shags. It was a great environment to chill out in.

Estuaries are very common in the Catlins but sadly estuaries world-wide are under threat. They are at the bottom end of the water pollution chain and many are frankly on death’s door. Just down the road from the Catlins, for example, there are very serious estuary concerns. In January, a Stuff editorial said this about Southland’s New River Estuary: If Invercargill’s New River Estuary had a human metabolism it would be convulsing.

It’s being simultaneously choked and poisoned by the nutrients we’re force-feeding it.

In less than two decades it’s gone from 1 per cent to 15 percent “grossly eutrophic” as macro-algae thrive, die and rot, a dynamic that creates spiralling degradation.

That 15 per cent represents 428 hectares of horribleness, right there, and spreading like gangrene throughout the estuary.

While there isn’t much that can be done to save an estuary on-site, lots can be done inland to improve water quality.

From a fishing point of view, the main quarry in the Pounawea Estuary are sea-run trout and kahawai. These fish hunt baitfish such as whitebait, smelt and bullies, as well as crabs. Kahawai also chase yellow-eyed mullet. Whitebait appear in spring, while smelt push upstream over spring and summer. Lures and soft-baits that imitate these baitfish work well. 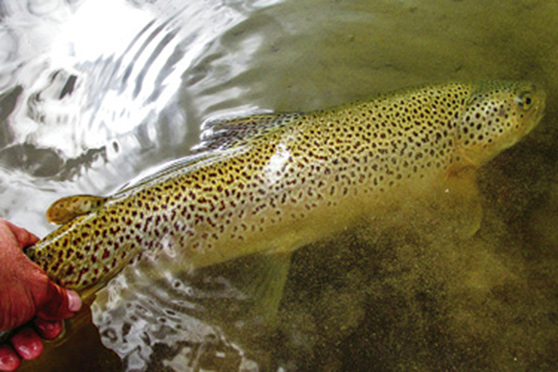 Fish the tidal areas early in the morning or late evening, or on an incoming tide. Later in the season, select lures that imitate bullies and crabs. Flies and bait are other techniques that can work year round. 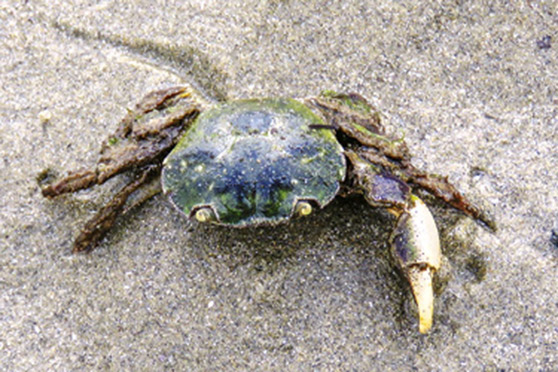 When fishing a new estuary, the main problem can be where to go on day one when faced with a huge expanse of high-tide shallow water. I waited until the tide began dropping in late afternoon and snuck my way out on to the sandflats behind the receding water. It was amazing how much water disappeared ahead of me and I eventually found myself a long way out on the flats fishing a narrow tidal gut, which presumably was what was left of the Catlins River.The water was very shallow, so through trial and error my lure choice got smaller and smaller. Eventually I tied on a Countdown Rapala #1 and settled into a cast-and-retrieve pattern. There were occasional swirls alongside me hard up against the bank, so I knew predatory fish were on the prowl for small fish being sucked out with the water.

Action was slow but finally my lure was whacked by a heavy fish, which initially I took for a trout. He stayed deep for five minutes but then decided he needed to up the ante. He went airborne and this gill rattling tactic revealed a solid kahawai. A good battle followed, but I finally eased him ashore and quickly let him go. With the tide pushing back in, it was time to head back across the flats before I got cut off.

I only got one more chance to target this spot as bad weather hampered my plans. On the second to last day of my visit, I headed out early to the same location and began casting with a white Panther Martin spinner. Through knowledge gained on my first foray, I knew where the deeper water was and hoped that would be where the fish were too. It was late summer, so small baitfish seemed quite scarce, though there were some mullet splashing on the surface.

Two hours slipped by before I finally got whacked. It was a feisty 1kg or so searun trout who gave a good account of himself before coming to the net. I let him go, and hoped his appearance meant other trout had also turned up. It was not to be, though a mullet surprisingly got snared on a yellow lure I tried later. 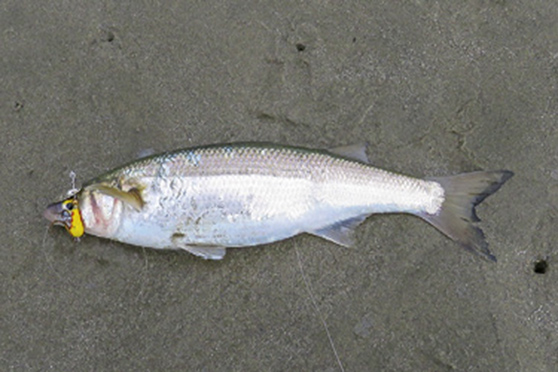 I called it quits but had learnt lots from the experience. If fish had been there in numbers, I would have done well; I was just a bit late in the season. Come spring, it is a spot well worth re-visiting.