The Kaipara Harbour has played a key role in my life from as far back as I can remember. Most of my extended maternal family either farmed, or still farm, the Port Albert/Wharehine and Tapora Peninsula regions north of Auckland.
Playing in, on and around the harbour was our primary source of recreation. My father grew up playing on the northern Wairoa. Whenever called upon to present at a marae, I refer authentically to the Kaipara as my awa and to Mount Tokatoka, a small, sharp volcanic cone between Ruawai and Dargaville, as my maunga.
This harbour was used as a primary form of transport and communication for the region’s Maori and early European settlers. It was also a rich food basket, and had vast supplies of kauri and kauri gum, which were transported out by sea.
Port Albert and Paparoa were, in fact, the last of the English settlements promoted by celebrated English property developer EG Wakefield. In the Albertland Museum of Wellsford the map of the town designed for Port Albert by the migrants can be seen.
Poignantly, Wakefield and his business associates hadn’t reckoned on the cussedness of the Kaipara Bar, nor the sheer horsepower of her tidal flows and shallowness of at least 50% of the harbour’s surface, where a vast region of mid-harbour sandbanks dries out at low tide. Due to nature’s hostility, the development of Port Albert as a prospective capital city foundered.
As a child, I learned that the Kaipara Harbour was the second-largest harbour in the southern hemisphere. According to Wikipedia: …it covers 947 square kilometres (366 sq mi) at high tide, with 409 square kilometres (158 sq mi) exposed as mudflats and sandflats at low tide.
I walked the seagrass of these exposed sandflats to harvest scallops with my family. Although scallop beds are now much diminished, I believe it remains possible to find an occasional scallop exposed at low tide.
With its southern estuarine tentacles snaking via Helensville right up to the edge of the Auckland isthmus, its northern reaches find freshwater well north of the farming township of Dargaville. More or less dead centre and athwart these two north-south arms, is the bar-facing Tapora Peninsula, a productive dairying region that reputedly features some of the best horticultural soils in the country.
For those who travel the northern roads at times, tendrils of the Kaipara cross SH1 at Te Hana, Topuni and Kaiwaka. And if you follow the Kaipara Coast Road out of Auckland, having passed through Helensville via Kumeu, to the west, the views of the Kaipara are most expansive from Cleasbies Hill just north of Tauhoa.
North of Kaiwaka, turning left at the bottom of the Brynderwyn Hills, the western arm of the recently-opened Twin Coasts tourist route winds north via the rural townships of Maungaturoto, Paparoa and Ruawai. Next up is Dargaville, alongside the brown upper reaches of the Kaipara known as the Northern Wairoa River. Heading northwards once more, the highway into Whangarei keeps company with the Northern Wairoa for about half the journey.
As a child, ‘The lagoon’ (a modest incursion of the sea into the spit of the harbour’s South Head) was a place of myth and mystery. I listened eagerly to tales of sleeping aboard an uncle’s launch in the lagoon, and of that same uncle meeting with friends, who had travelled up Muriwai Beach to Kaipara Heads to trade scallops for toheroa.
Upon finally slaking my curiosity as a family man, I was disappointed by the lack of access, and a bit disgusted to find an abandoned net across the lagoon with a large dead shark entangled in it.
On a later occasion, I took my own boat in via Shelly Beach and recall almost tripping over the mass of mullet finning away at the lagoon entrance as we walked in on low tide. Once again, a place of magic – but, like everything in the Kaipara, just so tidal!
As a lad the ‘Graveyard’ and the ‘Bar’ were also places of mystery and magic. Even though fishing was the primary interest of my extended and immediate families, we generally didn’t need to go so far to catch a feed. No were our boats sufficiently reliable or robust enough for such big trips. It wasn’t until I caught up with an old family friend that I got my first taste.
This friend had once come to grief inside the bar while fishing with one of his teenage sons. The current had buried his anchor so deep into the sand that a marauding wave filled his unyielding trailer boat. It took seconds rather than minutes for the boat to sink. However, fortunately the tide was coming in and, even more fortunately, they were in the company of other fishing boats so were soon lifted aboard, cold and wet but otherwise no worse for wear.
My friend spent the next 10 years building a Kaipara-friendly, robust and much larger GOP 9.75m (32’) Pelin Apollo. Powered by a 280hp Yamaha diesel via a stern-leg, the Apollo had the power and the buoyancy required to safely fish the Graveyard. Roger makes annual bar crossings, especially in pursuit of billfish when conditions permit.
It was while fishing with my old friend that I came to fully appreciate just how dangerous the region can be, especially for the old sailing ships. Regarded by many as having the best snapper fishery in New Zealand, geographically the Graveyard region involves the area of the main channel between the old lighthouse on Poutu Point (The Kaipara’s North Head) and the Tasman Sea. 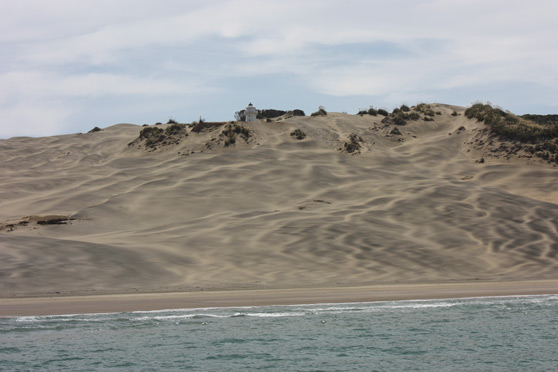 About one kilometre wide, to the north this main channel runs deep, hard up against the sand dunes of North Head, while to the south, it runs adjacent to a vast shoaling area of sandbanks, blind channels and white water. At low tide, a prevailing sou’west Tasman swell may get spent while crossing these vast shallows, leaving the main channel as flat as a millpond. However, once the tide starts to flow again, the arrival of ocean swells from the southern Tasman are imminent.
Imagine, if you will, a sailing ship struggling to find a breeze as well as contend with horrific currents. Now add some decent waves to accompany the prevailing wind, and said vessel is soon hard up against the North Head sand. While the initial beaching may be relatively gentle, as the waves build on the rising tide, any sand-bound vessel is quickly smashed. The record of 110 boats lost speaks for itself.
Interestingly, most Dargaville fishers would rather trailer their boats all the way to the Hokianga Harbour to launch rather than cross the Kaipara Bar. Beach launching directly into the surf is also considered much safer. Alas, for those with moored launches of one kind or another, these bar-crossing alternatives don’t exist.
The problem with the Kaipara Bar is one of sheer magnitude. Effectively a zone of sedimentation fed by the rivers that flow into the harbour, the bar region is a vast (50sq miles) submarine delta. Smaller west coast harbours can be every bit as dangerous, but usually have a shorter delta of danger to pass. For the Kaipara, there can be miles of angry sea.
Legally speaking, if a ship founders with loss of life, the skipper is held responsible. However, speaking as a sometime skipper, I am reluctant to judge. Skippers can be under tremendous pressure to perform – their credibility and livelihoods depend on a record of consistently bringing home the bacon. More than any other charter region I’m familiar with, a fishing trip on the Kaipara is designed for fishing and fishing only.
Kaipara fishing, especially in the bar region, is hard work: strong fish, deep water, 20oz-plus sinkers and big currents. Then, more often than not, you have a cycle of bleak and blustery sou’wester squalls to contend with. Kaipara fishing is not for the faint of heart.
As a point of interest, it might be argued that this fishery was manmade. As the old sailing ships crossed the bar region, they dumped hundreds of tonnes of English ballast to reduce draft. Generally, this ballast consisted of rocks that one man could handle. These rocks seeded a rich mussel-based habitat, which later developed into a commercial mussel fishery - until the advent of aquaculture. Now it is 50 square miles of shark and snapper city.
Charter clients are usually regulars, often of migrant origin, and are out to feed the family. The pressure on the skipper to enable their clients to achieve is understandable. Add to this pressure the optimism of our Kiwi “She’ll be right!” attitude and our ‘number 8 wire’ approach to problem solving, and we may have a recipe for disaster. May the lost ones all rest in peace!

• Use enough lead to at least bounce the bottom; the amount will change through the stages of the tide
• Too much weight is better than too little
• Ledger rigs are the easiest to manage
• Long traces produce more big fish.

• Can work extremely well when drifting in the bar region
• They also work well from anchored boats in the current
• The heavier the better when current is flowing.

• The tougher the better
• Octopus is best, mullet next, then kahawai
• Over the counter squid is good
• Pillies are attractive, but don’t last
• Whole jack mackerel are excellent in the bar region
• Mussels in crushed shell are good and don’t appeal to sharks
• Even shark works for bait
• Berley attracts sharks.

• Handlines with long traces remain hard to beat
• Electric reels are not silly
• A medium game rod and reel outfit is good.

1. The deeper the water, the less likely a wave will break.
2. The stronger the outgoing rip, the steeper the entering waves.
3. The last hour to the top of the tide usually provides the best conditions possible for the circumstances.
4. The changing tides produce still water, also enabling opportunities.
5. A boat with good volume on the bow is important, enabling it to lift on cresting waves rather than get buried and take one over the top.
6. When re-entering the bar, watch the wave cycle and count. Pick the big one and follow it in.
7. Once you commit to a line, don’t turn in the face of an oncoming or following swell.
8. More horsepower than required for normal running may keep you out of trouble.
9. The stability of catamarans and the buoyancy of pontoon hulls are good attributes to have.
10. A jet-propulsion system provides for incredible mobility.
A Givealittle page has been set up to help the families who lost loved ones in the Kaipara tragedy. You can contribute by using the following link: https://givealittle.co.nz/cause/kaiparatragedy
New Comment 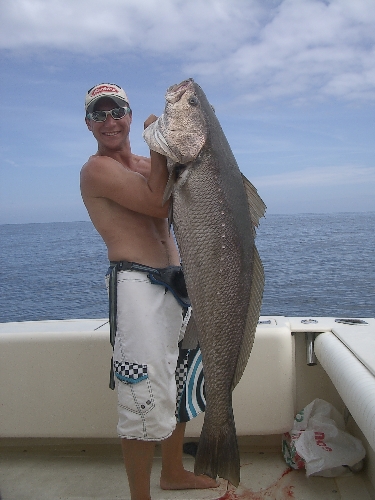