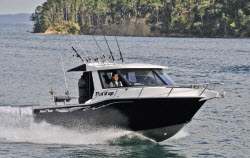 I first tested a Marco for this magazine in July 1992 – getting on for twenty years ago. Graham (who had been at the birth of both Fyran and Ramco aluminium boats) was producing small, entry-level tinnies for the fishing market, a market position that he maintained until he retired and sold the company to the Horne family – Dayne and his parents Helen and Bryan – in 2003.

While they still make plenty of basic, entry-level fishing ‘tinnies’, Marco Boats has also spread its range of products into more upmarket craft, including the Sou’ Wester range of four models: the 600, 650, 700 and 760 (for details of models and dealers, see www.marcoboats.co.nz).

I met up with Marco’s Dayne Horne at Matakana, around an hour north of Auckland, to check out the 700 Sou’ Wester Tick’d Up, owned by another family operation – the Longley Brothers and their dad, Grant. 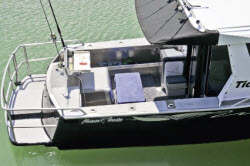 The 700 Sou’ Wester is constructed with 5mm bottoms and transom, and 4mm sides, topsides and chequerplate deck. Deadrise at the stern is a modest 17°, chines are downturned, and there are no planing strakes fitted (or needed). Of note is the cool-looking curved transom, which helps accommodate the engine installation.

Under the deck are six full-length stringers in 5mm plate. Three full bulkheads (including a collision bulkhead in the bow and the transom construction) support the hull laterally, while the addition of partial frames sees the deck supported at roughly 450mm centres. This hull is CPC-approved and the inboard configuration has about 200kg reserve buoyancy.

The welding looks strong and competently executed, and the hull has been well faired, as could be seen by looking along the well-cared-for black gloss paint finish. 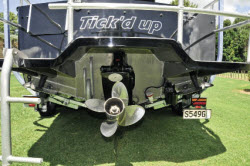 The 700 Sou’ Wester is available in both outboard and sterndrive configurations, with a recommended maximum rating of 225hp. Tick’d Up is powered by a Cummins Mercruiser QSD 2.0-litre, 170hp diesel inboard. This is a compact four-cylinder unit with integrated heat exchanger and exhaust manifold, common-rail fuel system, turbocharger, and seawater aftercooler. The engine installation is set into the transom wall, further minimising its impact on cockpit space.

The sterndrive is a Bravo One X leg, which features heavy-duty shafts, bearings and forged gears. Prop is a 19-inch pitch four-blade VenSura. Fuel capacity is 200 litres in an under-floor tank. The fuel port is set into the outside of the transom wall for easy access and to prevent inboard spillage.

We launched the rig at the Sandspit Yacht Club’s ramp and headed out towards Kawau Island with five adults on board. This is a fairly decent load and the rig turned out a maximum performance of 27 knots (50kph) at 3700rpm. Skipper Glenn Longley told me that with a lighter load he had achieved 30 knots (55.6kph) at 4000rpm, which seems about right. A more usual cruise speed is 20 knots (37kph), when it uses about 20 litres per hour. The engine was noticeably quiet and vibration-free for a diesel inboard.

All boat designs are compromises. In this case the modest 17° deadrise sacrifices a little bit of ride for a greater degree of stability. As we headed out around Kawau Island and the rip at Challenger Reef before heading around to the lee side, we struck a wind-against tide situation throwing up a tight 1.5m chop in places. We stopped for a drift-fish in the sloppy stuff, and I was really impressed with the hull’s stability in what would have been unfishable conditions for many craft. Under way again, the Sou’ Wester performed well with the leg trimmed in hard, forcing the entry down into the sea, with the rising sheerline and downturned chines keeping the spray at bay – a solid, safe performance overall. 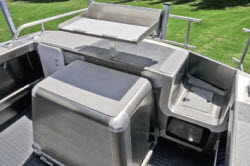 Bow access is either around the cabin sides (substantial bow rails and non-skid finish on the side decks help here) or through the hatch in the forecabin roof, if required.

A Quick Genius Ultra anchor winch with helm control feeds the warp and chain through the foredeck into an anchor locker in the bow. This can be reached through a hatch in the forward bulkhead if necessary. A Sarca #2 anchor is permanently mounted on the bow and a crucifix bollard handles any tie-off duties. 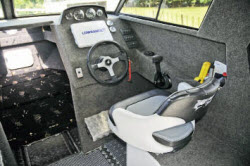 The forecabin is lined down to the deck, where a step-down drains into the bilge. A cabin light is fitted; there is stowage space under the berths and a flush toilet between them. Large side pockets add to the stowage available and the berths, with infill fitted, would sleep three at a pinch. Access to the rear of the helm console is through a screw-on plate.

Out in the wheelhouse a large dash with backlip and marine-carpet lining offers plenty of room for odds and ends. A Lowrance HDS 10 Sounder/GPS-plotter handles the electronic duties, and a Fusion MS-IP600 sound system is fitted. Other accessories include Lectrotab trim tabs, Protech UFlex hydraulic steering, and Mercury throttle/shift with Smartcraft/VDO gauges.

Visibility is good all around through 6mm toughened glass screens and side-sliders (polycarbonate is used on the rear quarters). A single grab rail is installed for the passenger, and a few more of these would not go amiss. Chequerplate decks are covered with tube mat.

The helm seat is an upholstered, moulded-plastic bucket with a swivelling-sliding base on top of a stowage locker with twin-hatch entries. The passenger side has an upholstered bench seat, with a twin-burner SMEV gas stove set into the top of another locker underneath the squab. Chequerplate footrests are provided for both seats, and stowage space is further supplemented by two side-shelves. The addition of a squab infill across the rear of the wheelhouse provides an additional berth in the forecabin. The exit to the cockpit is through lockable bi-fold aluminium doors.

A removable canvas canopy is fitted overhead on the rear of the hardtop, giving extra shade in the cockpit, with a grab rail underneath. A single bench seat is set against the rear of the cabin bulkhead, and beneath the upholstered top is a sink with 40-litre freshwater system. The faucet features a pullout shower nozzle for rinsing down after a dive or during stay-away trips.

Sealed chequerplate decks with tube-mat over the top drain to small sumps under each side of the transom wall, each fitted with 550gph bilge pumps.

The engine is installed through the transom wall, as mentioned, and the engine cover does not eat up too much cockpit space. It features radiused corners, about 150mm combings, and a Deck Tread panel on top forming a useful worktop. The engine well is fitted with an 1100gph bilge pump.

Decent pockets along each side of the cockpit will accommodate up to four dive tanks, and a saltwater wash-down hose is fitted. The transom wall shelters house and start batteries with an isolation switch, and a transom step-through with drop-in door is built into the port side, allowing easy access out onto the boarding platform. The platform is a decent size, with a raised section in the middle over the stern-drive leg, Deck Tread panels, and full rail cage incorporating a fold-down section forming a ‘T’ boarding ladder.

Stern cleats are fitted, and under the platform are fitted the trim tabs, 1kw transducer for the sounder, and water intakes and outlets. 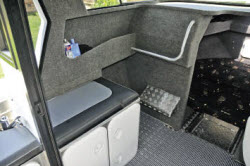 With forecabin and enclosed wheelhouse soaking up a fair bit of the hull length, and the inboard engine box nibbling away at the rear, the 700 Sou’ Wester doesn’t have a huge cockpit, but with the additional space provided by the railed-in boarding platform, we managed to fish five without too many problems. (The outboard version has more cockpit space, but less on the platform.) In rough conditions the excellent stability, good footing, toe-room and top-of-thigh support from the flat-faced gunwales were much appreciated.

On our way back to the ramp we spotted a few birds working in Kawau Bay and stopped for a drift-fish, using a combination of soft-baits, inchiku jigs and squid and pilchard cut baits. There were kahawai and trevally on top and snapper underneath. With all methods firing, it didn’t take too long to put a dozen or so pannie snapper on the ice.

Fishing fittings include a six-position rocket launcher on the hardtop, a cockpit floodlight, three aluminium through-gunwale rod holders on each side (total of six), plus two more built onto the bait-station on the transom. The bait-station features a removable bait-board for easy cleaning. Catch and bait stowage was taken care of with an aftermarket ice bin – the way most people go these days.

A mackerel-sized live-bait tank is set into the transom step-through, which, as mentioned, caters for divers (along with the tank stowage and freshwater shower). It would not take much to set up this boat for game fishing, and the Longley family have this and stay-away trips firmly in mind.

The trailer supplied with the Marco 700 Sou’ Wester is a Voyager A22, a tandem-axle cradle A-frame design with zinc-protected leaf-spring suspension. The boat is carried on 10 pairs of wobble rollers per side, and has an entry-bay keel roller. Guide poles aid retrieving in a side wind or current, and other features include a dual-ratio manual winch, wind-down jockey wheel, dual coupling, hydraulic braking, and submersible LED trailer lights.

This is a strongly built and nicely finished rig, which strikes the balance between being reasonably towable and bluewater capable. This inboard version may have slightly reduced cockpit space, but has advantages in fuel economy and gamefishing application – a top fish-and-dive rig with stay-away capability.

in Buy Sell Trade or Exchange
3 hours ago

in The Briny Bar
4 hours ago

Jim Henson passed away before all the muppets had appropriate jobs. Hence our public service m/puppets.The Port of Tauranga proposed a merger years ago, to be...