The science behind fishing can be very basic or confusingly complex, but always with the single-minded focus to catch more fish suggests keen angler Herb Spannagl.

Of all the things fish are attracted to, food and its scent are the easiest to understand. After that it becomes more and more complicated, often misunderstood and sometimes even controversial, as is the case with the role of ultraviolet (UV) light in fishing.

Without going through the full radiation spectrum, UV light is invisible to us and most fish, including trout.

So why is UV enhancement persistently showing up in flies, lures and fishing related discussions? Is it just another sales pitch or is there really something special about UV that gives our offering an added attraction?

Because we cannot see or touch it, UV has taken on a near mythical confidence-boosting status among believers. As we all know in fishing, confidence is a vital ingredient. Apart from the few who claim to be happy just taking their flies for a swim, most anglers want to catch fish and are easily captured by any promise of more success. I am no different from the rest and go to great lengths to up my catch rate.

While UV has been swirling around my fishing interests for quite a number of years, I have not really taken it very seriously until one of my recent trout jigging trips to Lake Rotoiti. I started off in my kayak but in the late afternoon, a mate invited me to fish from his flash boat. It had no shortage of luxury and comfort – padded dry seats, a MinnKota electric motor with spot lock and a fishfinder the size of a small television. We did the whole lake in an hour without finding fish and with the sun now low on the horizon, returned to Waipuru Bay where we had started.

A slow search found a concentration of fish in 30-35m. One boat was already there and pulling up a fish as we settled in close by. We both were rigged with standard Grey Ghost smelt flies, which have become the go to jigging flies for the Rotorua lakes. But despite holding right over the fish and getting our triple set of flies to the right depth, we never had a touch.

In contrast, the guy on our side of the other boat was hooking into one fish after another, and many of them were hooked while the rod was in the holder. His mate on the opposite side of his boat, like us, remained fishless. Jigging is largely vertical and boats can fish close together. Such gatherings can become quite social with discussion and advice flowing freely between boats. By the time we had to leave without anything to show for our combined effort, our successful neighbour had hauled up 12 trout, all on Pat Swift UV Grey Ghosts.

Now we have all heard of such inexplicable feats and mostly relegate them to good or bad luck. Without doubt, luck is often a contributing factor, but so are other more earthly explanations if one cares to dig deeper.

That night in my sleeping bag, I mulled over the events of the afternoon, trying to find an answer by reviewing the circumstances that made these UV flies so attractive to the trout. Was it the overcast sky or the fading light of the late afternoon? Was it the depth the fish were holding in a lake that is not renowned for its clarity?

Apart from understanding the danger of melanoma caused by UV exposure, I consider myself a UV novice. However, I did remember reading that UV rays penetrate deeper in the water column than any other visible colour, and that this is further enhanced early and late in the day, and in overcast conditions.

Things were becoming clearer, as these were precisely the conditions we had encountered. So far so good but I needed to dig deeper. On my return to New Plymouth I called in at Rotorua H&F shop and bought a couple of Pat Swift UV Grey Ghosts for closer inspection back home. They were neatly tied but outwardly little different from mine. More research into UV light revealed that it only becomes visible to us and trout if it is reflected from certain fluorescent materials which absorb the light of short wavelengths and then emit light of longer wavelengths. In certain conditions, trout are more likely to see and attack jigs with an added UV coating.

This is why fluorescent colours glow in or out of the water. However, long wavelength colours progressively disappear as they go down the water column, with UV light penetrating deepest. The important issue for us anglers is that UV light can still reflect off UV reflective materials or paint (and is visible to fish) when other colours have vanished. It is deep down that they seem to have an edge. I had to stop digging at this point as I didn’t want to confuse myself with more science, so I swapped the computer for the fly-tying bench.

Luckily, I already had a strand of UV Crystal Flash and had also purchased some finer UV reflecting Mylar before we were grounded by Covid-19. Level Four gave me lots of time to tie flies, and I filled my Rotoiti fly box with close to a hundred UV Grey Ghosts and similar smelt patterns, all waiting to be tested on the lake’s sizeable trout.

During lockdown, I talked to Pat about the benefit of UV and he confirmed that he fishes with UV enhanced flies most of the time. He also told me that his flies have a UV coating – not UV hardening resin, but UV reflecting paint. This reminded me that years ago I had bought a small spray bottle of UV Blast, which I had sprayed on a bright chrome metal jig. When the paint dried it became quite dull and I never used the jig. The smelt flies before UV paint was added. 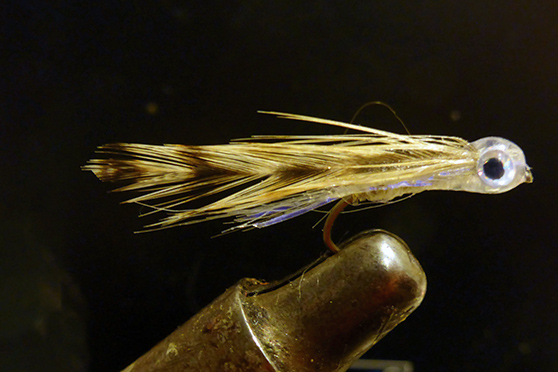 The smelt flies after UV paint was added.

At that time I did not own a UV torch so could not test how the paint reacted. With a small brush, I dribbled a drop or two of the clear liquid onto the heads of some of my Grey Ghosts. When I shone my UV torch on the flies, they glowed wherever the paint had touched, and so did my dull jig. What an unexpected revelation! 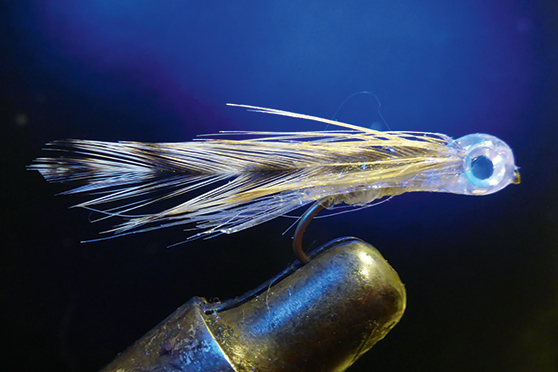 After UV painting, the UV is still reflecting in indirect light.

Finally, Level One arrived just before the boat fishing season ended on the lake. I booked my accommodation and shot off for a three-day fly testing trip to Rotoiti. On advice from Pat, I found a small concentration of trout in 25m at Ruato Bay. On my test rig of three identical Grey Ghosts, I’d only painted the UV Blast on the head of the middle one. On Saturday, I landed eight trout with five on the middle fly. On Sunday, I found a new patch a bit further out and landed 11 trout with six on the middle fly. When I got back there on Monday morning, the fish had moved and all my searching was in vain. 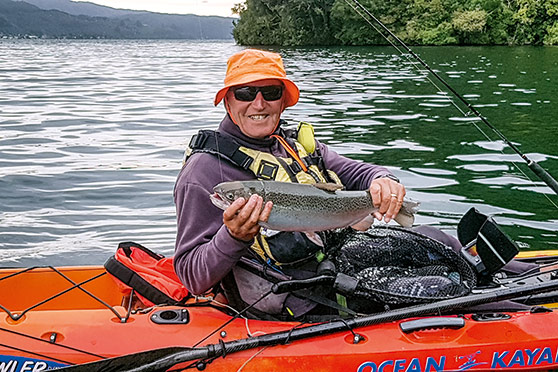 The writer, over several days jigging on Rotoiti, found the Grey Ghost flies coated with UV paint out-fished identical lures without it.

Despite the favourable numbers, I am reluctant to say that my two-day experiment proved conclusively that the UV painted fly was more attractive to the fish than my identical unpainted ones. I am confident that the inclusion of the UV reflecting paint had no down sides, so in my view can be safely added as an enhancement to make flies more attractive under the right conditions.

I thought I had finally unravelled the mysteries of UV, but guys like Pat Swift had already done the hard yards and incorporated the potential of UV fluorescence in their flies to catch more fish. Kilwell has also been on the ball and is now marketing a UV reflecting paint in nail varnish sized bottles. It has taken a while, but adding UV fluorescence to our fishing tool box is another step in the evolution of fishing flies and lures. What will be next?