Mark Kitteridge started fishing with legendary charter-boat skipper, Rick Pollock, over 30 years ago. Join Mark and Rick on their last trip to the Three Kings Islands together...

I’m not quite sure how it happened, but many years ago I vowed to regularly book multi-day charters with Rick Pollock until he retired. Fortunately for my fishing experiences and aspirations (but unfortunately for my bank balance), Rick went on to defy everything that the tough life of charter fishing could throw at him, and has lasted till the ripe old age of 71!

However, all good things must come to an end; July will finally see Rick stepping off the boat for the last time. So when my friend Mark Jorey offered me the chance for one last trip to the Three Kings Islands (my favourite place in the world), I could only say, “Hell, yeah! Thanks so much, mate!”

As usual, Rick’s boat Pursuit was berthed at Mangonui Wharf, an old fishing haunt of mine. As the previous group had only disembarked a couple of hours earlier, the crew was in full clean-up mode, so I took the opportunity to cast a stick-bait around before the others arrived. The Maria Rapido attracted two kingfish strikes despite the unfavourable tidal phase.

First came Mark, accompanied by Wellington fishing machine Tony Noble, followed by long-time friend Shane Dufaur with his mate Don Howard. That night we enjoyed a monumental mackerel-gathering session, which was lucky as the last group’s tankful of baits had apparently died in an unfortunate ‘incident’.

A small but welcome bonus

We were still alongside the wharf the next morning, so I dropped a live mackerel bait down from the stern while waiting for breakfast. Only a few minutes elapsed before my reel’s ratchet let out a wail. The heavy jig rod buckled over to a decent kingfish and all the old feelings of excitement and anxiety started flooding back, with anxiety taking over as the departing king powered towards the wharf’s pilings!

Desperately whipping the rod across to exert pressure from another angle got the desired reaction, with the king veering back out into the main current, before making a U-turn to head the opposite way, forcing me to chase it up the boat’s side to the bow. Everything went largely to plan after that, and when the modest-sized fish hit the deck, my cheers suggested I’d landed a king three times its size. All I can say is that nostalgia is a powerful thing – I hadn’t landed a kingfish from this wharf in over 20 years! 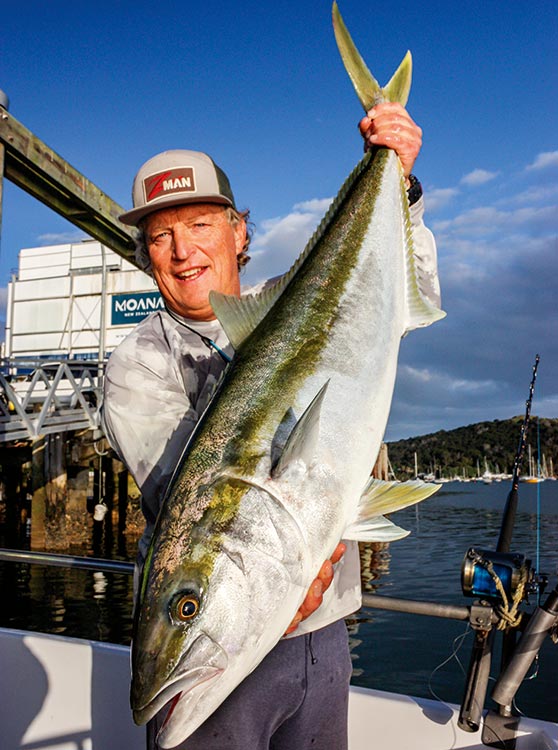 This hard fighting kingfish at Mangonui Wharf was just the beginning.

A trip to remember – again!

Although we managed to evade the marlin on the way over, the rest of the trip lived up to our hopes and expectations. It began the first night while anchored at the Three Kings when we encountered several monster squid to around a metre in length. I’d rarely seen squid pull off line before, but these behemoths typically took several minutes to land – and then the bloody barracouta arrived, removing several of our expensive jigs in short order. Time for bed.

After a rather futile koheru session the next morning, we cut our losses and headed for the King Bank, our trolling gear out, albeit with our big game expectations lowered after Rick said they’d only caught two marlin for the season so far.

So imagine our surprise when we’d only just reached the bank and five marlin started climbing over our lure spread, their purply-blue striped forms zooming inand out, crashing and swirling, or waving slender bills over bubbling lures. Among the chaos ratchets burst into metal song. Some stopped soon after, prompting frantic winding to bring them back into position, and in the end, just two outfits were left howling.

Mark and Don were the lucky anglers, but at least the rest of us were treated to some wonderful watery acrobatics while these guys toiled away – I’d forgotten how amazing marlin can be when in full-on surface-crashing mode!

Fortunately for us, both fish were eventually brought to the boat for release; one of around 105kg for Mark and another for Don at 110kg – his first!

In some ways this encouraging start was bad though because pursuing marlin suddenly became much more attractive than anything else; but at least we’d always planned to do the Pursuit ‘Picket Fence’. This scenario sees all the anglers spread out along one side, each soaking a good-sized live bait. To make tangles unlikely, the bait-fishing methods are mixed, with a couple of anglers using different-weighted sinkers to get the baits down deeper, another couple allowing theirs to swim around unencumbered, and one (or two) deploying a balloon rig. This tactic has led to some great fishing in the past, producing an interesting and exciting mixture of kingfish, sharks and marlin.

But not so much this time, with just the odd shark and kingfish hooked over the three or four hours of live-baiting, and, to make matters worse, the better sized kingfish ended up as dramatically shortened and still quivering bloody messes. Damn those bronze whaler and mako sharks! 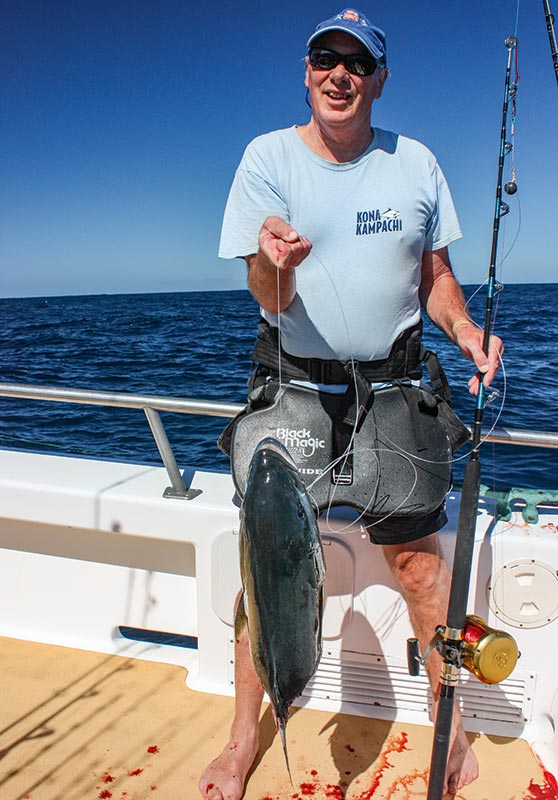 Sharks were a problem at times; Tony had more than his share!

Indeed, Tony was in the midst of fighting a particularly large and stubborn bronze whaler when Mark’s koheru bait finally attracted the right species. The hooked marlin steamed away at high speed across the surface, one porpoising leap after another, straight for a nearby passing boat. We all tried to gain its attention, waving and gesticulating frantically, but despite apparently failing, disaster was somehow avoided, enabling Mark to bring his second marlin boat side for release 20 minutes later.

And so it went on for another two days, with trolling proving more productive for attracting marlin bites than live baiting, and in the process we were reminded yet again why Rick is considered to be the best in the business. Not only did his extensive experience tell him when we should cut our losses and do something else, and where we should do it, he was also particularly instrumental in hooking one of the four more marlin we caught and released. At the time we’d just had several momentary ‘bites’ without hooking up, so when one marlin’s attention turned to the ‘moose’ rod set well out the back, Rick was quick to add extra movement to the lure, letting it out then winding it back in. The result was a solid hook up. I loved seeing that big grin on Rick’s face as he passed the outfit down to Tony with a 130kg stripy attached! 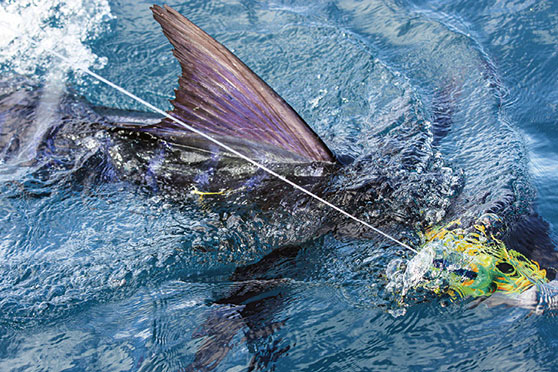 A fat stripy is brought to the boat for release.

By this time four out of the five anglers on board had caught a marlin, so upon seeing Shane with his chubby bottom lip hanging right down near the deck, puppy-dog eyes all sad, there was no hesitation when my lure hooked up again: I started buckling up to the bent rod and yahooing – he could wait his turn like I had!

Okay, okay, just kidding – I’m not that mean! Instead, I had the pleasure of seeing Shane bring a lovely and very energetic 120kg stripy boatside for release – whatever happened afterwards would be pure cream on top of our delicious cake!

And that cream turned out to be a pretty thick layer. With just a couple of hours left to target kingfish on our last day at the King Bank, I decided to go big, experimenting with whole dead skipjack tuna rigged on a circle hook. This resulted in three nice kingfish: an 18-20kg fish to warm up, followed by a beauty longer than Rick’s official measure (around 138cm and 36-38kg), and finally another decent one around 27kg – probably my last fish ever with Rick. I will therefore treasure the photo I took of this legendary skipper standing behind that kingfish, along with his excellent deckhands George Kittow and Finn Henderson. So again I say, so long Rick, and thanks for all the fish, mate!

Legendary skipper Rick Pollock stands between his hard-working deckhands George and Finn, accompanied by the writer's last ever kingfish caught on board.