Mainland angler Dylan Booth shares some of his best memories from fishing his local water – the Taieri River.

It’s been quite some time since I last fished my local river, the Taieri. My buddy Jesse and I did particularly well on a recent trip, catching 25 trout on the last day of the season.

There had been no shortage of fish this day. They averaged around 1.35kg (3lb), just a little better than the average for this river. We discussed where we would start and chose a section of river I’d fished previously in a fly fishing competition for the Otago Anglers club, where we won the team prize.

With a game plan in mind, the day started with a pie and coffee from the servo, followed by a short drive which incorporated plenty of fishing chat. We soon arrived and could not have asked for a better day – blue sky, no wind and the birds were chirping! On went the boots and waders, followed by a walk through some paddocks. As we closed on the river, the excitement levels grew.

On our final approach, we saw fish rising in the side pocket off the main current line. Jesse threw on a black and gold paddle tail soft-plastic and just like that, we had one in the net. We instantly knew the day was going to be one that all trout fishermen dream of – and it didn’t let us down!

Over the next few hours, it was absolute carnage with multiple big browns coming to the bank – the biggest coming in at just under 2.7kg, which is a trophy for that section of the river. This was the last time I would be fishing the river for some time, and it proved to be a day to remember and cherish.

From the end of April to the end of July the water changes considerably. Temperatures drop and the trout had moved further up for spawning, so there were less fish about, but the ones remaining were generally a lot bigger than normal.

On one day at the end of July I was out fishing with my good friend Jack, and we decided to call past the lower part of the river to try and tangle with a big sea-run brown trout, as this is the time of the year when you might encounter one. My call was spot on. Jack landed a small fish first, then within a dozen or so casts, I hooked up to a big brown trout on a paddle tail soft-plastic – my go to soft-plastic for sea-run trout as it’s the closest you’ll get to a natural looking bait.

As I cast, I had a tap but didn’t take much notice, then I brought the lure over the top of a log and this big dark fish swirled on it. He completely missed, but I stopped winding and he ate it on the drop, right in front of my feet. I had a little luck on my side. The fish tried to run me over and around every snag it could find, but luckily I was fishing six-pound leader and my knots proved solid. When I finally got it to the net, I could see it was only just hooked in the lip.

Jack even got his boots wet for my fish – what a legend. Once it was in the net, I knew this was the big sea-runner I was searching for; in fact, it was a bit larger than I thought! It tipped the scales at 3.14kg.

It was one of the biggest fish I’ve caught from the Taieri, one of the most underrated rivers in the South Island. The biggest I’ve ever landed from the river I caught fishing with a buddy during the school holidays. The river was in flood and we planned to fish for a few trout to take home. 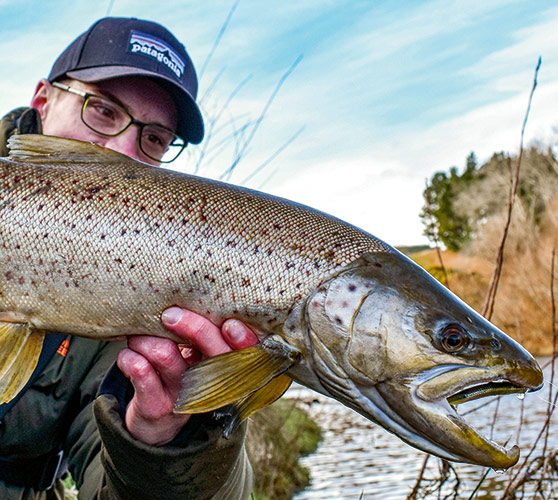 We started off with a few smaller fish each, then moved down to an area that is more heavily fished. I put on a bright yellow Tasmanian Devil lure, attaching it directly to the 20lb braid mainline. A few casts into the murky waters later, I hooked into what I initially thought was a snag, but it didn’t take me long to realise this was a fish – and a solid one at that.

After fighting it on an inexpensive Warehouse combo, I banked what was the biggest trout I’ve ever seen in my life. As I didn’t have a camera on my phone, the only way I knew to show people was to keep it.

There was only one problem. I only had a small school bag full of snacks and lures, so I tied it to my bike. Unfortunately, it kept falling off on to the road, but a farmer saw what was happening and rang dad for me. We later weighed it and it went between 4.5 and 5kg!

It is these memorable moments that make fishing so special – I remember them just like they were yesterday. These were fun times and this big fish experience was what truly hooked me on trout fishing.

I generally fish soft-plastics that are either white or silver as they’re as close as you’ll get to a small smelt, bully, or whitebait – the fish the trout are predating on. Hard body lures will also work, though. Try to match the food source as much as possible.