Have you ever heard the quote “elephants eat peanuts” in the context of fishing? It’s a saying that contrasts the more widely recognised “big bait, big fish” mantra. Yet, it’s Josh Darby’s experience that big fish will often take, and perhaps even prefer at times, smaller bite-size offerings.

Enter the micro jig, a miniature hard-bodied metal lure with capabilities that continue to bring excitement to my fishing adventures and an accompanying grin – much like a good magic trick, you’re left wondering how they do it! I will attempt to demystify these dynamite ‘bite-size’ offerings, discussing the typical sizes and designs, the gear needed to fish them, and a range of tips and tricks for using them to hook and catch fish such as snapper, kahawai, trevally, and even kingfish.

What is a micro jig?

The design of these fantastic lures is in the name. Micro jigs are metal jigs of a significantly smaller size than most traditional jigs. Well there can be debate around the weight that classifies a micro jig, I tend to think of them as jigs between seven and 60 grams. Like traditional jigs, micro jigs come in a variety of shapes and colours including both slender, streamlined profiles as well as the wider flat fall type designs. Due to their small size, micro jigs require special assist rigs that include one, sometimes two, very small hooks designed to not unnecessarily impede the action of the jig. To this day, I remember seeing these hooks for the first time and experiencing an immediate scepticism, thinking, “I’ve got sabiki hooks bigger than this!”

However, time has shown me that these jigs and their accompanying hooks punch well above their weight. While they may not have been around as long as some of the more popular jigs, their success has led to brands including Shimano, Daiwa, Ocean Angler and Berkley offering an exciting array of different micro jigs. Ocean Angler and Catch also offer a selection of micro jigs made of tungsten as this metal is 1.7 times denser than lead. The density of tungsten allows a smaller profile micro jig to be produced at the equivalent weight of a larger lead-based micro jig. 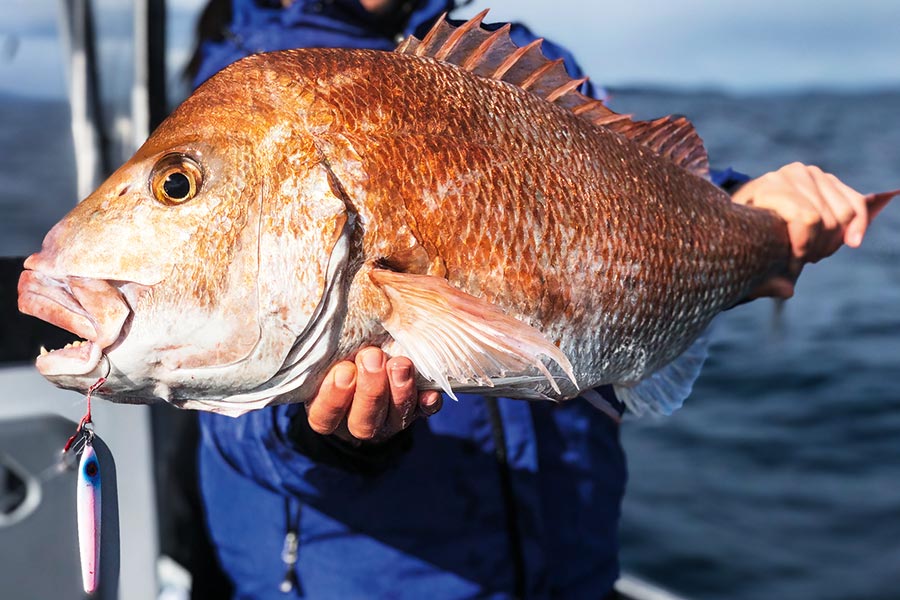 What gear should I use?

Like other lures, such as soft-baits and kaburas, micro jigs are best fished with rods and reels that have been designed with their use in mind. Micro jig rods tend to be short (under two metres in length), with my preference being a rod of around 1.8 metres which incorporates a strong butt section but a sensitive tip section (much bendier than your typical soft-bait rod). When using micro jigs, hooks pull more frequently than when soft-baiting. This is likely due to the reality that micro hooks, while strong for their size, lack the strength and gape of larger hooks. Consequently, I have found that a lighter drag and a more supple tip are needed to successfully absorb the erratic fight of a determined fish. Using a micro jig rod with these properties has considerably improved both my hook-up rate and the ratio of hooked to landed fish.

A long rod is not necessary as generally you’re not trying to cast micro jigs great distances and shorter rods can be more conducive to fighting fish. That said, I do like to cast my micro jig short distances to counteract variables such as the depth of the water and drift speed, which is why I pair my micro jig rod with a 2000-3000 size spinning reel. Many people prefer overhead reels as they find they have better contact with their micro jig on its descent, so personal preference does come into it.

Like with most lure fishing, you should use braid for your mainline and a fluorocarbon leader of a couple of metres. These days I tend to use 20-30lb braid connected to a 20-30lb fluoro leader via an FG knot. I also use a uni or Lefty’s loop knot to connect the tag end of the leader to the solid ring of the micro jig assist hook/s.

What areas, time of year and fish should I target?

Almost all species of inshore fish can be targeted successfully using micro jigs, with snapper, trevally and kahawai being especially partial to them. They can also be used to catch baitfish such as jack mackerel and koheru. The multitude of fish species attracted to the micro jig often means that there can be constant action, making them an excellent choice of lure if taking the kids fishing – the constant bites and variety of fish can help to keep things interesting. While micro jigs can tend to attract smaller fish, do not be fooled; they are more than capable of drawing in big fish to keep things interesting for the adults too. What’s more, on multiple occasions, a micro jig has saved a fishing trip for me. Just last year I was fishing a reef in the Far North well known for holding good fish and yet I could not buy a bite with soft-baits, kaburas or inchiku jigs. A switch to a micro jig yielded immediate success with numerous large trevally and snapper boated over the next few hours.

Micro jigs can be successfully used year-round in almost all scenarios you would fish other types of inshore lures. However, there are certain areas and situations where I have found them to be most effective, the first being around the anchovy schools commonly encountered on the east coast of the upper North Island in autumn. Due to their size, micro jigs can replicate the anchovy well, ‘matching the hatch’. Casting or dropping your micro jig around schools of anchovies is likely to yield trevally, snapper, kahawai and even kingfish. I find them particularly effective for catching trevally, and I will use them over reefs where I believe trevally are likely to predate. Despite their small size, micro jigs, especially the tungsten models, can be used successfully in deeper water. I am often rewarded with snapper and even the odd gurnard when the fishing is hard out in the deep and I switch to a micro jig. The only situation I do not tend to use them is in very shallow water over the foul where a soft-bait is best used. Micro jigs are extremely effective on autumn snapper and trevally.

I normally use two different techniques when fishing micro jigs on the drift (as with most types of lure fishing, micro jigs are most effective while on the move). The first I use in deeper water, say 20-50 metres, where I tend to find that micro jigs are fished best vertically. To achieve this, you may need to lob your micro jig up your drift to counteract a fast drift speed. Like soft-baiting, you should watch your line carefully during the initial descent, as a pause or increase in speed may indicate that a fish has picked up your micro jig on the drop. If your micro jig does make it to the bottom, as indicated by slack line, then flick your lure off the bottom by raising your rod tip up with two or three twitches. Immediately after this twitching lift, you should allow your micro jig to drift back and sit on the bottom by lowering your rod tip quickly (quick enough that slackline is produced on the descent). While you can experience a bite at any point of this technique, I find that the lure is most often hit soon after touching down on the bottom again. My theory is that the twitch and lift mimics a wounded baitfish and captures the attention of the predatory fish, while allowing it to momentarily sit on the bottom signifies a dead or dying baitfish that is now an easy feed.

This technique is especially good for targeting snapper that tend to predate near the bottom in deeper water. If you wish to target fish higher in the water column, simply duplicate the technique but add in a few winds rather than allowing the lure to drift back down to the bottom, then repeat until you are satisfied you have covered the area where you think the fish are. In shallower water, especially around the anchovy schools, you can choose to cast your lure like you would a soft-bait and ‘hop’ your lure back towards the boat, working more of the water column. This will open up the possibility of hooking an array of fish including snapper, trevally and even kingfish. Cole, one of the author's fishing buddies, showed great patience in landing this kingfish hooked on the 'Flea' micro jig while fishing anchovy workups.

I think a part of the reason I have become so fond of micro jigging is that it replicates a lot of the enjoyment I get from my primary style of lure fishing – soft-baiting. Like soft-baiting, micro jigging is a very active way to fish that requires some technique (though not as much as soft-baiting) and often provides very aggressive hook ups. What’s more, I have found that micro jigs can really entice a bite when the fishing is tough. So, whether your fishing with the kids, the fishing is slow, you want to target a trevally, or simply enjoy the challenge of a new fishing method, make sure you give micro jigging a go soon; I’m confident you will find it to be a magical experience! hook and reeled in all by myself - Firth of thames