The effect of water clarity on fishing

Water clarity is something charter skipper Nick Jones often considers before, during and after fishing trips – perhaps because it’s quick and easy to assess but more likely because it has a big influence on fish behaviour and the relative effectiveness of different angling techniques…

Water clarity is largely determined by turbidity. Turbidity is a measure of the degree to which the water loses its transparency due to the presence of suspended particulates. Periods of heavy rain and land sediment runoff makes coastal water more turbid, as does wave action that leads to suspended sediments and biological factors like plankton.

However, it gets slightly more complicated – several other independent factors determine the available light and therefore underwater visibility. These factors are:

• Sun angle – change of light is my favourite time of the day to drop a line, and it is common knowledge that fish feed hard as the sun is rising or going down. Sunrises and sunsets bring about the ‘changing of the guard’ in terms of species and consequently the last or first chance for species to feed that day or night.

• Overhead weather – I often find good fishing occurs on overcast or drizzly days, especially in shallow water. Such days just feel fishy when you’re heading out, probably because of positive associations from past experiences in similar conditions.

• Depth – visibility reduces with depth and everyone knows that lumo items can enhance fishing out in the deep. Even in the Hauraki Gulf, for example, the effectiveness of various kabura colours changes markedly with depth. I wouldn’t bother with chartreuse kaburas in less than 40m, but they can be deadly in 55m+ areas.

• Shade – I clearly remember talking to a landbased expert who has a big snapper spot in the Far North. It’s at the base of a cliff and the water in front is shaded until mid-morning. He’s pulled numerous 20lb – and even a 30lb – fish from this spot, but never after the sun hits the water.

• Wave action – more light will penetrate the surface on a calm day than a choppy one. In addition, surface lures such as stickbaits or game lures will be easier for predators to spot on a calm day, but, on the other hand, they may look more realistic in rougher water. Coastal swell creates white water, which is a great place to cast a soft-bait or a stickbait as snapper and kings love using white water to ambush prey.

• Moon phase – unless you’re fishing close to the city, the moon determines nightly illumination. The moon has a mysterious effect on fishing, with one theory suggesting lousy fishing on the full moon can be attributed to more nocturnal feeding which leads to less daytime action.

The above bullet points aside, between the New Zealand coast and offshore fishing spots you’ll encounter a wide range of underwater visibilities. How can you account for this or, better yet, use it to your advantage? I’ll keep it simple and talk about tactics for three situations – murky water, clear water and mixing zones. 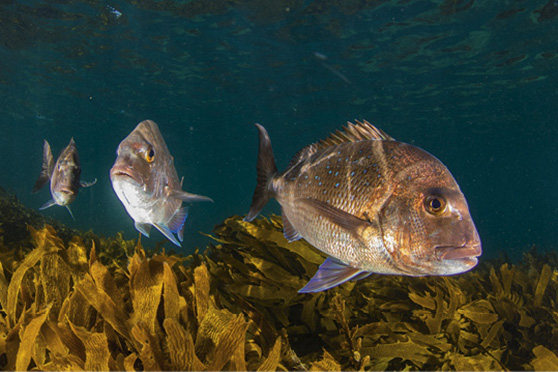 Fish are primarily reliant on their sense of smell and lateral line system to find food in muddy water. Using bait is an obvious option, and some inshore snapper spots that are normally a waste of time can really fire after a big storm. Whether this is due to the stirred-up bottom dislodging food or the cover murky water offers, snapper tend to feed hard in unexpected areas – such as Orakei Wharf after a cyclone where 60cm fish can turn up!

If lures are the order of the day, think about tying on scented options and darker colours that contrast and stand out in greener water. Slow down your lure movements too – if you’re soft-baiting this could mean using a lighter jighead for longer hangtime or adapting a slower jerk retrieve. In the gloomy Waitemata Harbour, the snapper sit hard on the bottom. A favoured technique is to drag a soft-bait or kabura along the bottom to make it as easy as possible for snapper to intercept.

As a keen lure fisherman, I think clear water offers key advantages over murkier areas. Firstly, it allows the angler to scope good underwater habitat, or sight fish and present directly to them. Secondly, it increases the likelihood of predatory fish (like kingfish) being in hunting mode and seeing your offering.

Nevertheless, the clearer the conditions, the more finesse required as fish will be warier about something looking unnatural. Things that become more important in clear water include good bait presentation that looks natural and conceals hooks, symmetrically rigged soft-baits that swim well, and using lighter lines and fluorocarbon leaders. I use Daiwa J-Thread fluorocarbon leader – it is super-thin relative to other fluoros of the same weight-class and has a low memory that limits visible kinks or bends. If you’re targeting a fish like big trevally in the bright waters of Far North, these are the little things that can make a difference.

Kayak anglers and rock fishers have great success in crystal-clear shallows because they offer stealth. Some particularly hard-core landbased anglers even commando crawl around the rocks to avoid spooking snapper visiting their berley trail – I know because I used to be one of them!

Mixing zones are where two different bodies of water meet. They may or may not have different salinities or temperatures, but they almost always have differing clarities. And whilst a certain amount of mixing goes down, the important thing is that a lot of it doesn’t. This creates a temporary road block or even wall for some species of bait or predators that prefer one body of water over another.

The mixing zone of coastal ‘green’ water and offshore ‘blue’ water is classic striped marlin territory in NZ as baitfish accumulate in these areas. Another classic Kiwi situation is spinning for kahawai at the mixing zone of river mouths, where they prey on concentrated baitfish and use the dirty water as cover.

A less classic but equally interesting mixing zone involves algal blooms we regularly see in the outer Hauraki Gulf. Often a deep red colour, they aren’t hard to miss and can cover quite large areas. Although I’m not sure how deep they persist, we generally yield poor returns around these blooms, maybe due to oxygen depletion. Or maybe it’s just pure coincidence like lots of fishing things 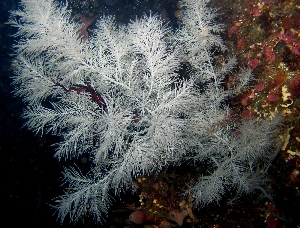