After being out of lockdown for two weeks, we were eager to get out in the boat to film episode two of The 20lb Hunt. But with the sea pumping a 0.8 metre swell on the east coast and a notorious bar stopping us from exiting the harbour, we opted once again to head to spot x off the rocks as we knew it was fishable in these conditions.

With the same experienced crew as episode one, Jane, Flounder and myself arrived on our rock just as the sun started to emerge on the horizon, greeting us with the most amazing pink and orange sunrise.

The berley was quickly deployed to hopefully work its magic on the big moochers. The conditions were perfect: cloud cover, good swell, dirty water and an outgoing tide – everything we like when chasing big snapper off the rocks.

Big, fresh yellowtail mackerel were the first baits deployed. As the big unweighted baits slowly drifted down the water column armed with 8/0 C-point hooks, we all stood on the rocks anticipating our first bait getting slammed, but it wasn’t to be. In fact, it took nearly two hours for the first good bite. After that hit, however, it didn’t take long for the fishing to ramp up and the snapper to start feeding hard. I watched Flounder cast out a bait, and within 10 seconds of it hitting the water, his surf caster had almost bent in half. He didn’t even have time to click his bait runner on before the hit. He glanced at me with a blank face, “I THINK THIS IS A BIG DOG!” I agreed as I started to hear nylon stripping from his reel. Once the fish stopped its powerful run, Flounder got a few winds on the fish but it was apparent that it was heading straight for the rocks out in front. Flounder had found himself in the same position I was in a few week’s prior, with a big drop off stopping him from getting to the edge of the rocks. Wasting no time at all, Flounder jumped the big gap and came up tight again on the fish. With the fish not far from the rocks, the fight was still far from over as we needed to land this fish in a large swell with no landing net. Flounder was still battling hard as the fish did big powerful tail pumps trying to make its way back down to the bottom.

When the fish started to tire, Flounder dragged it around towards a gut as I carefully climbed down the rocks between swells. Finally, the fish came into sight, popping its big head out through the surging white water. I couldn’t believe what I was seeing: a massive pale fish with the biggest knobby nose and head I had ever seen on a landbased snapper – it looked like a big Australian snap. With the line coming into reach, I grabbed the trace and dragged the fish over towards me just as a little swell surged in. But as I was dragging the trace over the rocks, I heard the telltale “ping”. The trace had snapped. Thankfully, I had just managed to get a firm grip on the big pale slab first. I quickly ran Flounder’s prized fish up the rocks and gave it to him while yelling, “Look at the nose and the head on it!” What an amazing looking fish. It measured 78cm and weighed in at 8.2kg/18lb. We quickly snapped a few photos before swimming it in a rock pool to get some strength back into it after its huge battle. Flounder then ran down the rocks and released the fish into the sea to fight another day. 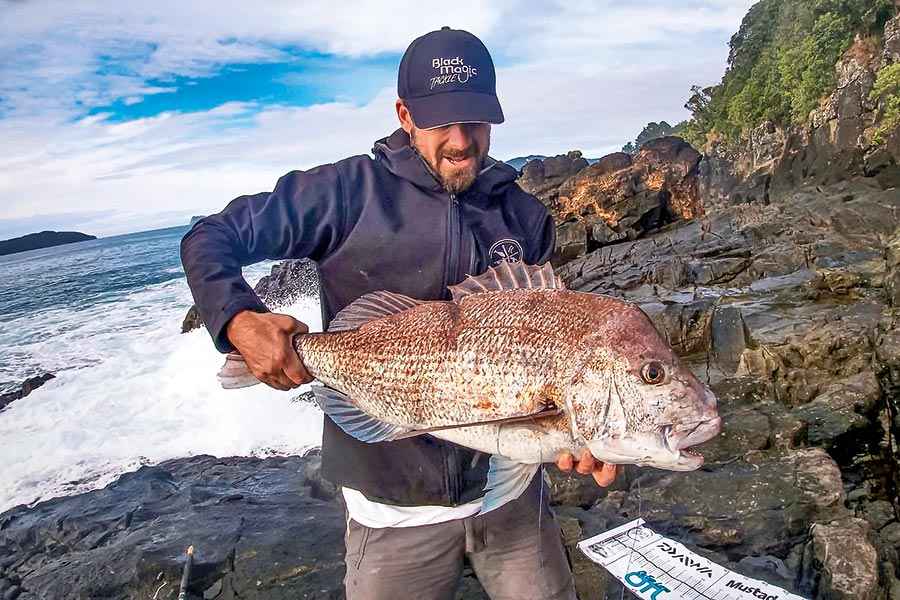 There has been no shortage of big fish on the team's first two attempts at catching a 20lb snapper.

It wasn’t long before the next reel started screaming. After copping a bit of stick for putting a rather small mackerel on for bait, my baitfeeder started to sing. I gave the fish time to run and eat the bait, then flicked the reel into gear, waited for my line to go tight and finally gave it a little strike. Fish on. Line started stripping from my reel hard and fast. I adjusted my drag twice but the fish was still heading straight out to sea. The fish eventually came to a slow stop and I made a few metres back. I then noticed that the fish was starting to come up quite high in the water column – maybe this was a kingfish or a shark. Whatever this fish was, it had run out of steam after its first few line blistering runs. I was now getting all that line back and the fish wasn’t far from the rocks. Finally, it broke the surface and I was happy to see a big kelpy head pop out of the water. As I manoeuvred the big snapper through a gut, Flounder climbed down the rocks to land it. With one swift swipe, he grabbed the snapper tail and my leader and pulled the fish from the surge. It was a nice healthy 7.1kg/15.5lb snap. After a few quick photos, I slid the big kelpy back into the water and with a kick of its tail, it was gone. 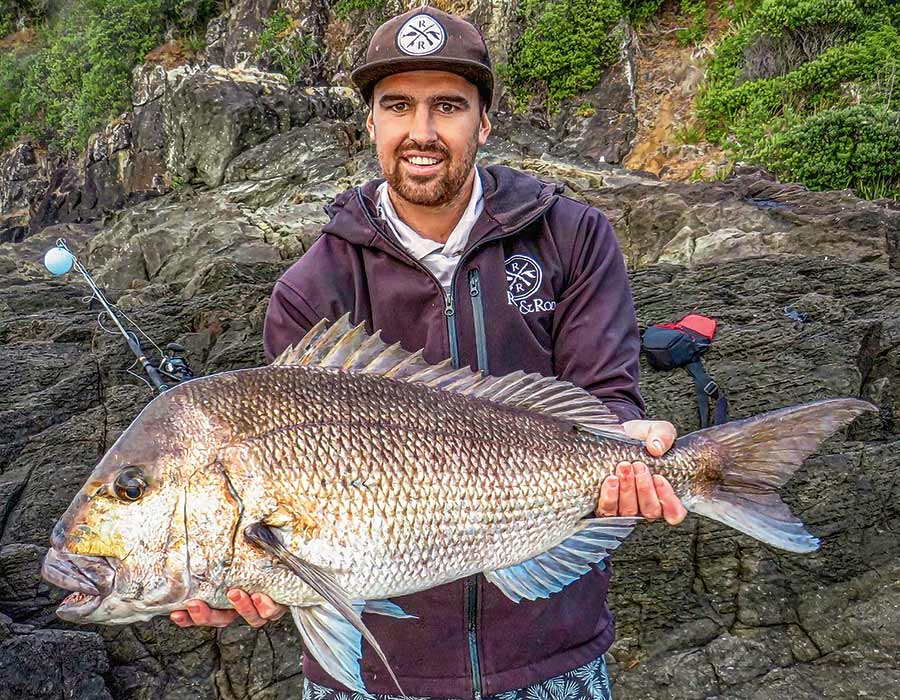 With two exceptional snapper on the board within half an hour, spirits were flying high even though we hadn’t hit the 20lb mark. But the day was far from over so we wasted no time getting baits back out into the water and it wasn’t long before a reel was screaming yet again.

The call came over the rocks, “Big dog, big dog, big dog!” I looked up to see Flounder locked and loaded. In the time it took me to put my rod down on the rocks and look back up, Flounder had already jumped the big gap and was in full battle with what seemed to be the fish of the day. Flounder is a very experienced landbased fisherman, and wasted no time getting on top of the big fish. He had it turned quickly and wasn’t giving it much room to move. In no time at all, he had it in the wash at his feet. A surge pushed the fish to the surface and out popped a knobbly head and nose. “It’s the same fish bro!” We were both certain he had hooked the same knobbly big snapper from earlier.

I quickly made my way down the rocks as another surge brought the snapper right in close. After a couple of missed attempts, I managed to secure it. We inspected it closely and realised it wasn’t the same fish, even though they looked very similar. This one was in fact a bit bigger, weighing in at 9.6kg/21.1 pound – Flounder’s ninth 20lb snapper from the bricks. After a few photos and a number of high fives, Flounder slipped the big snapper into the drink and it powered off strongly. 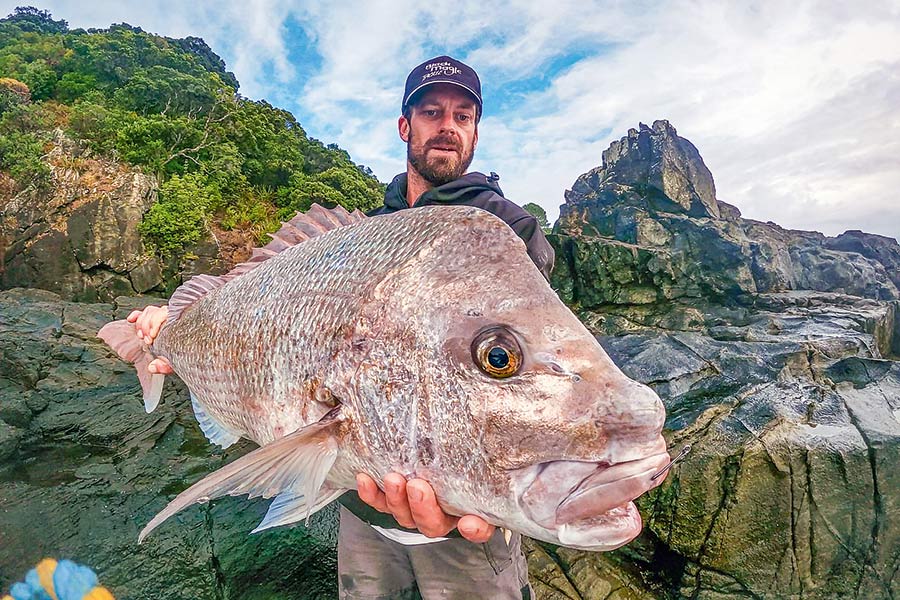 This massive red is Flouner's ninth 20lb snapper off the rocks.

With three great snapper on the board and some epic footage, we decided to call it a day and head home to start editing episode two of the 20lb Hunt. 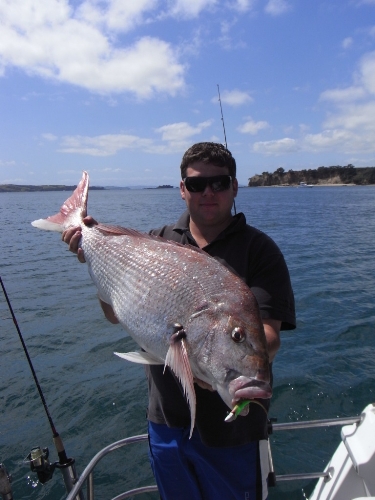