Last year NZ Fishing News put the call out for readers to nominate a boat – either theirs or someone else’s – worthy of the Suzuki Ultimate Marine Makeover. Grant Dixon reports that the response was overwhelming, with over 200 deserving cases nominated, and it turned out to be quite a journey…

Before we began the quest to makeover a boat, we approached various companies in the industry, inviting their participation and they were quick to put their hands up. Others came on board once we knew what we were dealing with and what was required.

Suzuki Marine were the first to offer their services, supporting the project with a new outboard and securing naming rights – Suzuki Ultimate Marine Makeover (UMM) it was.

The offer was for a suitable outboard up to 100HP, fitted to the transom of the UMM recipient’s vessel. BLA, distributor of Humminbird electronics, put up a Helix 7X Chirp sounder/plotter, lifejackets and warm hoodies, as well as offering a MinnKota electric motor if it was practical to fit one – unfortunately, it was not. 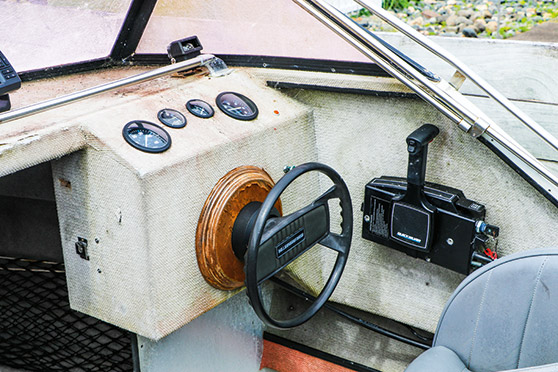 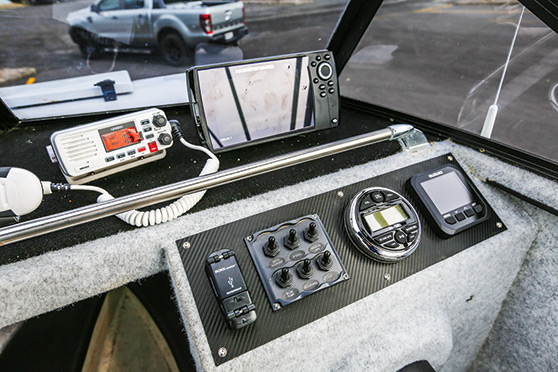 Hamilton's Suzuki dealers Phil Birss Marine did a fantastic job of redesigning the instrument panel and helm station which is dominated by the Humminbird Helix 7X Chirp sounder/plotter.

Absolute Marine came to the party with all the chandlery. They decked the boat out and created a list of necessary bits and pieces including seats, steering, stereos, fuel tanks, cleats, fairleads, switch panels, nav lights, a fire extinguisher, rod holders and the many other bolt-ons that go into the makeup of a trailerboat. 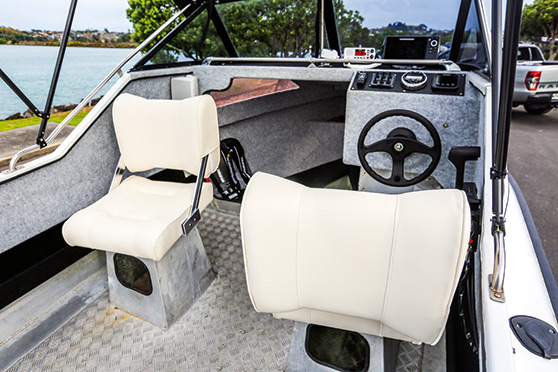 Reversible seats from Absolute Marine add a touch of luxury to Oarsumm's cockpit without taking up too much space.

Hamilton based Voyager Trailers offered to refurbish the chariot the boat sits on including any re-galvanising, wiring, lighting and winches needed. Century Yuasa provided two marine batteries – one dedicated for the outboard, the other to the ‘house’ needs – electronics, lights etc. 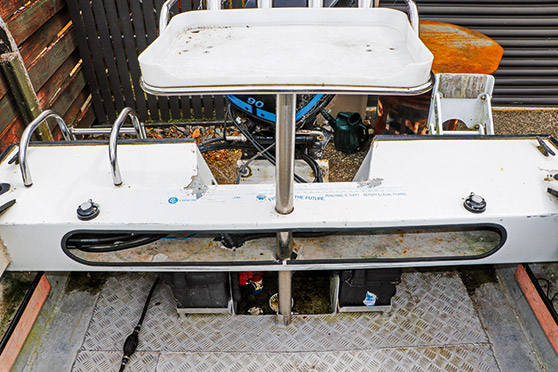 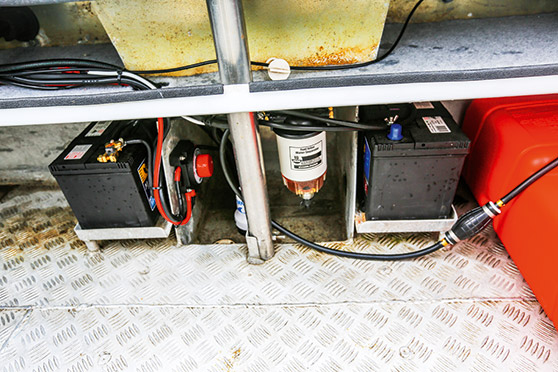 No makeover would be complete without a paint job and once the vessel had been chosen, Hamilton-based Fleet Image joined the team. These guys are paint and panel specialists with outlets in Te Awamutu, Hamilton and Auckland, and took on the job of tidying up the dings and dents as well as finishing it all off with a new paint job. One of their suppliers, PPG Paints, kindly provided the paint.

Waikato Motor Trimmers manufactured a new canopy, made new squabs for the cabin and re-lined the cuddy and cockpit walls, as well as organising a refurbishment of the windscreens front and side. 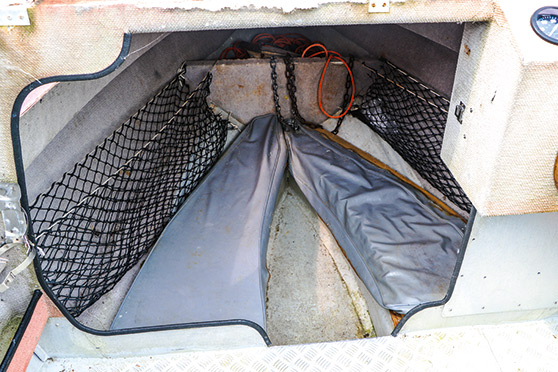 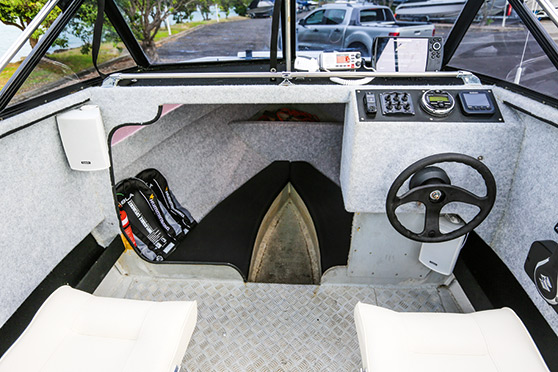 Waikato Motor Trimmers replaced all the internal carpeting on the hull and helm station as well as creating a new canopy, refurbishing the squabs and adding new windscreens.

Boating and Outdoors came to the rescue at the end of the project, suppling a VHF, aerial and stereo speakers to finish the electronics parcel off.

A nice touch came from the Catch! tackle team who put up a new Pro Series acid wrap jig rod matched to a JGX 3000 reel, along with a selection of their great lures.

With the nuts and bolts taken care of, a winner had to be chosen.

Whakatane based Sports Marine Ltd director Mike Stables’ nomination caught our eye. He suggested his good friend Jason Riedinger’s 33-year-old McLay could do with a spruce up and that Jason and his family were a deserving case. They’re passionate about their fishing but dealing with some recent health issues had kept them off the water.

The selection was made and Nibbler, as it was then named, was brought from Whitianga to Hamilton for the first stage of the Suzuki Ultimate Marine Makeover. The plan, albeit a very bold one, was to have the boat ready to hand back pre-Christmas. For several reasons, it didn’t happen.

Voyager did the trailer, which was in reasonable nick, proud. It had a full re-galvanising job, and the axles and bearings were replaced along with the lights, plugs, winch and jockey wheel.

The next job was completed by Fleet Image who gave the boat a complimentary new livery of PPG paint, followed by Waikato Motors Trimmers contribution who greatly reduced the bill for their part. 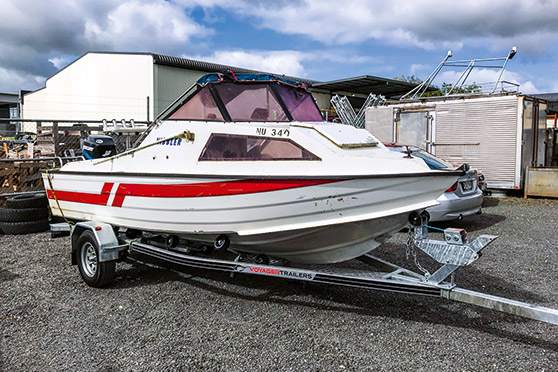 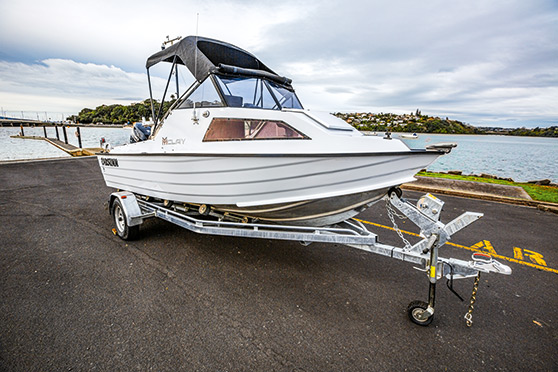 A new paint job, canopy and decals set the hull off nicely.

Next up was Waikato’s Suzuki dealer Phil Birss Marine, which undertook the set-up of the new Suzuki 90HP Four Stroke as well as the addition of all the Absolute Marine, BLA and Marine Link elements. The boat was water tested and Phil was pleased with the performance. His words were, “She goes great.”

One of the things Jason was concerned about was the reliability of his old rig which was powered by a 90HP two-stroke motor. While the hull was sound, everything else was old and he was reluctant to go too far from base.

Now, with the reliability and economy of the new Suzuki, the world (or at least Mercury Bay) is the Riedinger family’s oyster! When Jason turns the switch, he knows everything is going to work as it should.

Phil and Josh did a magnificent job of the refurbishment. The way he created the new dash was testament to the effort and professionalism the Phil Birss Marine crew brought to the project. The quality of the Suzuki Ultimate Marine Makeover result was very much at the behest of Phil’s efforts. 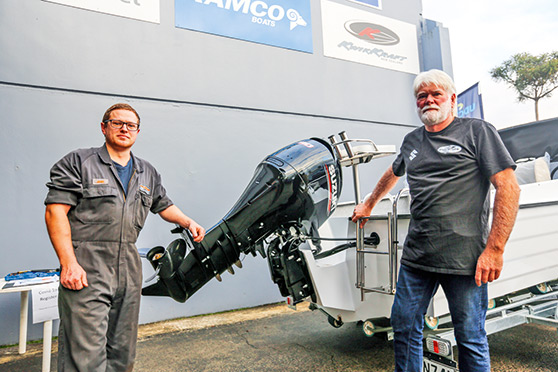 The Phil Birss Marine team - Josh (left) and Phil (right) - did a magnificent job in bringing all the elements of the Suzuki Ultimate Marine Makeover together.

The finishing touches came courtesy of Brave Design. The Reidinger family came up with a new name for the boat – Oarsumm – in which they cleverly worked ‘UMM’.

I spoke with Steve McLay, managing director of McLay Boats, to see if he had the original decals. Unfortunately, he didn’t, but he did supply the 2020 version, which now adorn Oarsumm. Steve told us the vessel was at least 33 years old and he was rapt to hear it had been given a new lease on life. 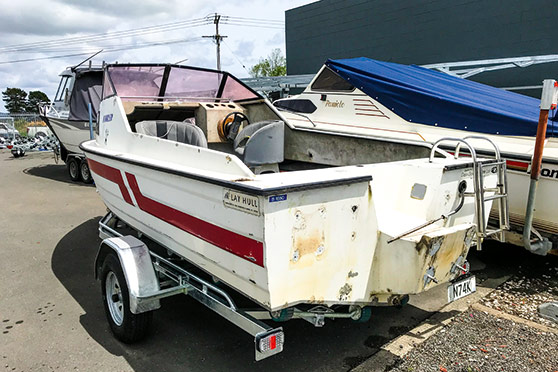 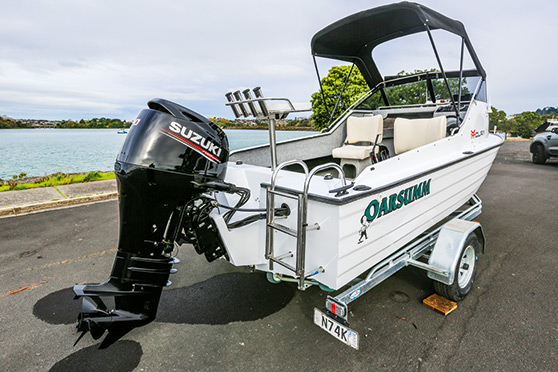 The stern quarter shot shows the clean, fresh lines of the Mclay hull.

Finally, the time came to hand the boat back to the Riedinger family and what better place to do it than at Auckland’s Outboard Boating Club’s great facilities.

Most of the companies involved in the project were present and after the unveil, Jason got to spend a little time in his ‘new’ boat, going for a shakedown ride with representatives from Humminbird and Suzuki on board who familiarised him with their products’ features.

The family went along on the photo boat to see the refurbished rig back in the water for the first time and they were looking forward to the next day of fine weather to try it out for themselves.

NZ Fishing News would like to acknowledge the contributions big and small from those involved. To see the looks on the Riedinger family’s faces was well worth it.