Surfcasting into the Rocks

The first decent snapper Gary Kemsley caught on a lure was a seven-kilo fish at Tauranga Bay near the entrance to Northland’s Whangaroa Harbour. He had found himself in a rocky, weedy area, and tried out a new soft-plastic lure he had received from Australia. The moment was an enlightening one, providing one of life’s fishing lessons he was not to forget…

I could not believe it was a fish when the line went tight but soon there was no doubt. The snapper lugged around head down in the weed for five minutes, then came to the edge. Like many other times in my life, things changed. I would never ignore hard-to-fish water again. The boom of soft-baiting was still years away but I was a convert. Catching a snapper on a lure was a revelation.

Surfcasters often look at mid-beach reefs and rocky shores as places just to lose sinkers, and the thought of a diminished tackle bag keeps them away. I was no different, but after that snapper experience, I decided I needed to learn a way to fish such places without losing all my gear. I was mainly a bait fisher at the time, so tried the new Rotten Bottom rigs which come from the UK. The breakaway sacrificial sinker system was great, as was the opposition one that held the sinker on a shallow curved wire.

The idea with these was that the sinker was on a light mono line, which would break if you hooked up in the weeds or rocks. Your hook was attached to the main line and with luck, you would land your fish without losing your sinker. If the sinker did not hook up, then it was retrieved along with the catch and reset for the next cast. These were cheap, well designed, fail-safe and effective.

Using such rigs will let you fish foul ground effectively for just the cost of a few sinkers. In these areas, you may find fish you don’t encounter in your open water fishing nearby. Species such as blue and red moki, parore, tarakihi, porae, marblefish, hiwihiwi, parrotfish, red pigfish and conger eels – some more desirable than others – are often in the mix. As we know, it is not all about snapper, but you may be surprised at how many of them are lurking among the bricks, along with the likes of kingfish and trevally. 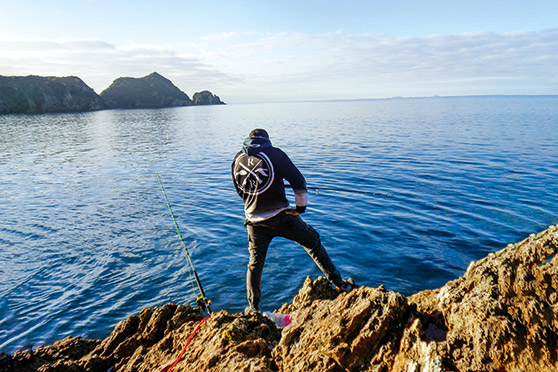 Softbaiting and livebaiting are both good options for targeting shallow reefs from the shore.

A better approach for targeting kingfish and kahawai might be to fish with a livebait under a float, although you have no control over where it swims. Another option is to slidebait your livebait into the promising territory using a breakaway rig. Watch the rod and get on to any fish that hook up quickly or they may hang you in the rocks. There is plenty of pressure on the rivermouth areas and deep drop-offs where anglers slidebait, but not so much on the inshore reefs where there could be as many, if not more kingfish present.

The livebait approach with a sacrificial sinker is a productive one and will catch fish for you, but in the shallow, gnarly territory, a better and more effective way to go is lure fishing. For kahawai and kingfish, try surface poppers and sliders. These will keep you out of the weeds and rocks, at least until you hook a kingfish, which will head for the heaviest weed area and any jumble of rocks nearby. Kahawai are more accommodating, making surface runs and jumps that generally keep the line high in the water and out of the snags.

Kingfish crave cover and when offshore fishing, we look for them around the reefs, so why not try the inshore reefs? Even places where the rocks show at low tide are worth investigating. By casting and walking, you can cover a lot of ground in an hour or so. You can make sure that any fish present see your lure at least. A stationary bait does not attract fish that may be a couple of hundred metres down the coast but walking and casting will allow you to cover this territory. 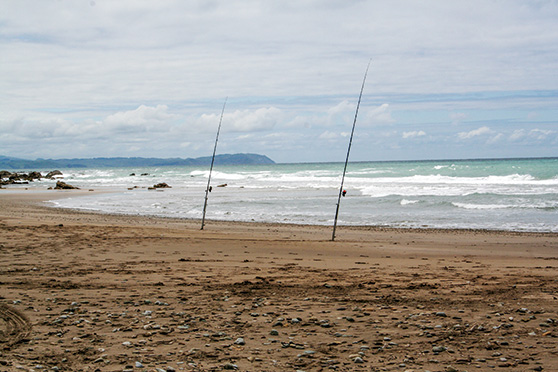 The rocks to the left of the sand would well be worth flicking a lure around.

Look for edges where the rocks run into the sand. Predatory species will lurk in such places. They patrol the edges on a regular cruising pattern and could show up every half hour or so as they look for fish in trouble – an easy meal. You can imitate such fish with your lures.

Kahawai, kingfish and snapper are likely customers to this approach. Be attentive as you will need to react quickly to a take to get the fish moving away from the reef. Try a variety of lures such as poppers, sliders, Rapalas and Halco-type minnows and metal spinners. Try Hex Wobblers and thin profile Stingsilda lures as well. Something will work for you. Do not let them sink to the bottom though or this style of fishing can become very expensive.

You can make your lures more attractive by adding a small soft-bait or fly on a dropper 30 or 40cm ahead of the lure. This gives the pretence that the lure is chasing a smaller fish, adding some realism to your presentation which may start a bit of competitive feeding. Sometimes you will find the fish will take the small fly in preference to a larger lure.

Be prepared for some tackle attrition – it is part of the game. The best spot to fish is usually the gnarliest, weediest, rockiest part of the reef and you will hook it for sure sooner or later.

If you have read this far, you are about to get your pay-off. There is a way to fish effectively for all the species present in the roughest country you can find.

The technique is soft-bait fishing. These are comparatively cheap lures so you will be happy fishing them deep into the structure, where crevices and holes hold even more species than you have encountered around the reef edges.

What sort of fish? Well there could be tasty blue cod or a sleepy marble fish or even hiwihiwi. There will be parrotfish and wrasse that are keeping out of the way of the predators. You may get lucky as I did at Lottin Point in the Bay of Plenty and find a crevice that I am sure ran down the rocks and into a cave. In the cave were a school of tarakihi. I caught several and later visits produced more. They were only in that crevice though; I never caught any elsewhere on that patch of reef. It is worth poking around with small soft-baits; even a handy octopus or crayfish may find your lure and like the look of it.

Another area to concentrate on is weed beds, particularly kelpy beds that run out from the rocks to sandy bottoms. While weed beds can be fished easily from a boat vertically, they can be difficult to fish well from shore horizontally. Soft-baits can fish such spots. Just use one heavy enough to cast without a weight and rig it with the hook buried just under the surface of the plastic. You will get where no one has been before. You can also try suspending it under a float so it will just swim over the top of the rocks as you retrieve, and not get buried. Fish will dart out to grab it.

One beauty of the float is that it will allow you to fish the soft-plastic lure very slowly. This can be deadly, and the float disappearing will likely be the first indication of a take. You can use the float to drift with the currents to get to spots that are difficult to access, and more importantly, keep the lure in the zone, rather than retrieving it out of the hot spot. All soft-baits will work for you but try using plastic crab imitations. These will catch fish even when static in the water. I have caught kahawai, trevally and snapper with these, as well as a couple of blue moki.

Does your favourite surf beach have a shallow rocky reef on it? Or does it butt up against a rocky shore? Is it a place you have avoided because you are worried about losing your gear? Time for a re-look. See if there are obvious edges or corners where fish may congregate, or a place where the current or wave action might be unearthing food and making it available to resident fish.

Give up a day on the sand and go investigate. You might find some fish there that you were not aware of. It might also prove to be a good option when the fish are not cooperating on the sand section of beach. 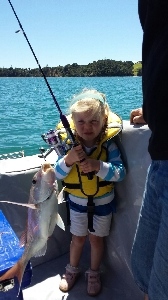