For some, surfcasting is a leisurely activity best saved for Sunday afternoons; for others, it’s another exciting form of sportfishing. This month, Gary Kemsley provides some great ideas for those wanting to start taking their surfcasting a little more seriously…

Most of us start surfcasting with an understanding of what we are trying to achieve and a basic idea of how to go about it. A hook is just a hook and a sinker is just a sinker at this stage. Why not use spark plugs or rocks with holes in them? The lack of success this attitude brings often gives people the impression there are no fish in the ocean; however, there are some anglers who are driven to work out why they are short on results.

The first thing typically addressed by unsuccessful surfcasters is the choice of location. When you have spent your weekends at the local so-called hotspots without any encouraging results, you will be lured into going to other hotspots, but more often than not, the results won’t change.

The odd ‘lucky’ catch (unlucky for the fish) will spur you on and have you wasting more time at the unproductive local hotspot. But hang on a minute. Why is it the local hotspot? It must produce sometimes. Does it produce in one particular season? Could it be that it only produces for one species? Did you know that you were fishing for a certain species or were you just after any fish? Maybe results come at this ‘fish hotspot’ after dark? A lot of places do. Have you tried it at night yet? I bet not.

Watching other anglers is an important part of the process. Are they catching? What baits are they using? Where are they casting? Does ‘their’ water look better than where you are fishing, or even just different? If they are catching, you need to study the water they’re casting into. Is it a different colour? The darker the water, the deeper it is. This will usually be the better spot to fish during the day. Have a look at their rigs, as well. How many hooks? What size? Are they bigger or smaller than yours?

Joining the crowd at a surfcasting competition is a great eye-opener. There you will see all stages of surfcaster development. It is all worth studying. Make yourself known to your neighbours. They may be able to help you or vice versa.

A good start for contest fishing is to get rid of the spark plugs and rocks with holes and buy some breakout sinkers. These have wire ‘legs’ that will dig into the sand and hold your bait in one place so it won’t disturb your neighbours or wash back into shore. When you get a fish on or decide to reel in, the wires release and fold up, allowing easy retrieval. These sinkers are very important when fishing in a crowd. If you don’t use them and there is a current running down the beach, you will get to know your neighbours quickly when your line drifts into theirs and tangles.

Some fishers use flasher rigs, which usually involves having two hooks on droppers and a sinker on the bottom. The hooks are adorned with flashy materials and/or feathers. These can be quite successful when fishing for kahawai and gurnard in the surf, but they still need baiting. Fishing the same rig with baited hooks will also work on most other species you encounter. 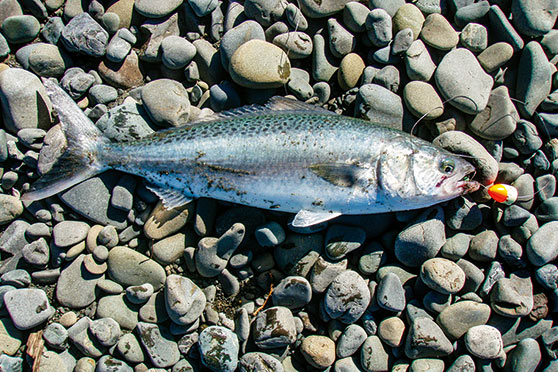 Some anglers will tell you that to catch snapper you need a running rig, and while this is not necessarily the case, they are effective. This rig gives snapper the ability to take the bait and run without feeling the sinker immediately, which means they are less likely to spit the hook. Fishing with J hooks will work in this scenario as fish often swallow them quickly, but J hooks tend to hook the fish deep in the throat and at times even in the stomach.

“Great” you say, and it is for a ‘keeper’-sized snapper. However, more often than not your snapper catches will be close in length to the minimum size or even undersized. Such fish need releasing. Try using circle hooks and check out how the fish are hooked. More than 90% will be in the corner of the jaw and you will be able to release them pretty much unharmed (if a little stressed out). This is well worth thinking about if you fish in snapper nursery areas. Here in Hawkes Bay, that is the beaches around Wairoa in summer. In this period, your entire catch can be under 30cm. Any beaches fronting on the Hauraki Gulf will be similar. I used to fish the flat rocks near Mellons Bay (where I lived at the time) and some nights it would make you cry. I’d hook a snapper every cast in the evening but all were small and most were badly hooked, some bleeding. That’s when I went full time with circle hooks.

Ninety Mile Beach can be the same. We see the photos of the big ones caught there but the average fish is quite small and you will want to release most of them. Fish with circle hooks and you won’t have any worries about catching and releasing small snapper. Try size 4/0 and 5/0. They will hold the biggies for you, as well as catch eating-size fish.

I don’t want to make it sound too easy but when using circle hooks, you don’t even need to strike your fish. Let them bite and when the line comes up tight against the sinker, the hook will be pulled into the corner of the jaw. After that, it is up to you to keep tension on the line. If you do, the hook will stay there ‘till you slide it on to the shore.

Now you have some ideas to work with, let’s talk about baits. The biggest misconception about baits is that you must have only the best, the freshest and something the snapper are used to eating. That’s wrong – it’s understandable advice, but wrong. Most of the snapper caught in Hawkes Bay for example, particularly off the beaches, are caught on cut squid baits. These snapper could live their whole lives without encountering a live squid. The right bait for the right species. Spotted dogfish favour crabs and other molluscs.

Tuna is another popular bait. Fresh is best? Well not always. One successful Hawkes Bay surfcaster liked skipjack tuna as bait. If you found him fishing, it was not unusual to see him with his skipjack tuna cut into strips and hung out on a length of fishing line to mature in the sunshine. He caught his share of snapper when they were around. I have caught a moki on marinated and cooked mussels when I took the wrong bag out of the freezer early one morning. I wasn’t about to drive home again so used what I had.

When snapper are really on the bite and in good numbers (which means there is competition for the available food), they are likely to take anything – even a piece of carrot cut in the shape of a fish.

There are no hard-and-fast rules, but I have to say that fresh and fresh-frozen baits are my favourite. There are a few tricks to learn with baits and bait preparation.

Pilchards make one of the best baits but can be one of the worst to use. Hard frozen, they are likely to snap in half as you poke the hook through them. You need to have them off ice for a few minutes before tying them up. Yes, tying them up. Once your untethered bait hits the bottom, it’s like a dinner bell going off, and not just for the snapper you are after. There will be sea lice, crabs, worms, shrimps and small fish fighting over it in minutes. They will quickly strip your hook and the passing fish won’t be impressed. You need some bait elastic; not cotton, but stretchy elastic. Use it to hold the bait in place on the hook and keep it together till your snapper swims by. 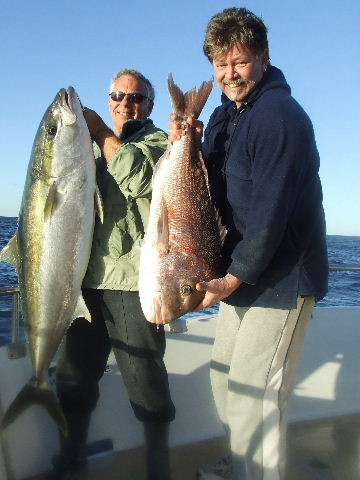