Snapper - Everything You Need to Know

Snapper is undoubtedly New Zealand’s most-studied and best-understood fish species – although considering the difficulties of getting funding for researching fish and the difficulty of studying them underwater, this is not necessarily saying a lot, writes Sam Mossman.

Early Maori fishermen knew an awful lot about snapper. It was, after all, an important fish to them, making up nearly 16% of the remains found in pre-European middens New Zealand-wide, and in the more northern parts of the country, they made up the bulk of the catch. Without a written language, most of this knowledge was handed down through the generations by word of mouth, and unfortunately much of this lore was doubtless lost with the social upheaval of European settlement.

The earliest record of the study of snapper dates back to Captain Cook’s arrival in New Zealand in 1769. Not surprisingly, journals from the expedition record that snapper were caught by the crew of the Endeavour soon after the ship’s arrival in the North Island. While Cook was occupied with observing the transit of Mercury off the eastern coast of the Coromandel Peninsula, the botanist Daniel Solander caught a snapper specimen that would be painted by artist Sydney Parkinson and later formally described in scientific fashion.

Much of the initial study of New Zealand’s snapper revolved around where to place this species among all the others known to science and in providing it with an appropriate name. While the crew of the Endeavour referred to these fish as ‘breams’ (because of a fish with similar appearance in Europe, which we will get to in a minute), in 1770 Solander gave the fish the scientific name Sciaena lata, initiating 220 years of taxonomic descriptions during which 20 different scientific names were applied to the fish we know today as snapper. 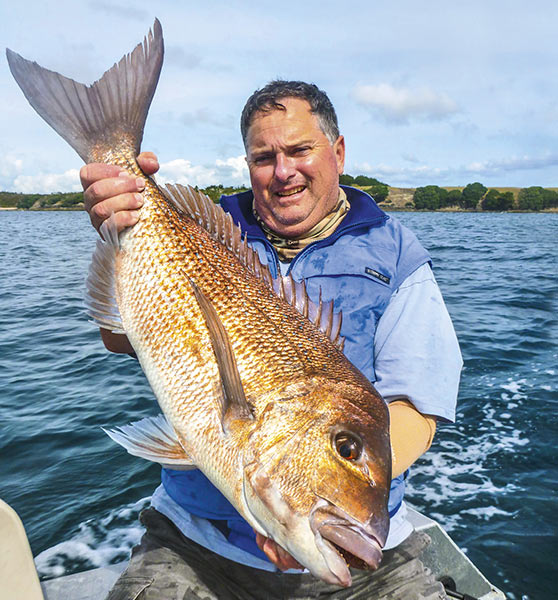 Sam with a nice Kiwi snapper; in over 220 years of taxonomic descriptions there have been 20 changes of scientific name.

A relatively recent change occurred in 1990. The numerous scientific names that had been applied to snapper throughout its range – which includes western and eastern Australia, Lord Howe and Norfolk Islands, the Philippines, Indonesia, China, Taiwan and Japan – were discarded and these fish and our snapper were brought under the one name: Pagrus auratus. Then, in 2013, the scientific name was changed yet again, to Chrysophrys auratus. With this sort of track record, I doubt we have seen the end of the changes. Translations of most of the scientific names refer to the golden colour of the fish.

The common name has also undergone some change and it has not been unusual to see snapper spelt “schnapper” in this country. How did this come about? One explanation has it that in the early 1800s two German scientists, M.E. Bloch and J.G. Schneider, were investigating the taxonomy of many fish species, including snapper. By this stage Europeans in New Zealand had probably coined ‘snapper’ as the common name, possibly because of the strong jaws that the fish possesses, or the similarity to the ‘true’ tropical snappers (which belong to a different family called the Lutjanidae). As well as (inevitably) providing a new scientific name, it seems likely that the two German scientists formed the variant spelling ‘schnapper’ which is commonly seen in older publications and would reflect the German’s accent. Other common names include ‘bream’ or ‘brim’, which some fishermen from the South Island use to refer to small snapper. This terminology is inherited from an Australian source, I suspect. Maori also had different names for the fish depending on size, tamure referring to adults and karati meaning small or juvenile fish.

Things became further complicated in 1993 when the American-based International Game Fish Association (IGFA) officially recognised snapper as a gamefish. The IGFA sought to avoid confusion with already-listed members of the ‘true’ snapper family (Lutjanidae), which also have powerful jaws and look similar to our snapper but are not closely related. The IGFA adopted the somewhat obscure Australian term ‘squire’ and listed the fish as ‘squirefish’, much to the annoyance of many New Zealand and Australian anglers. After protests, the fish was finally listed as ‘Snapper (squirefish)’ in the record books.

Our snapper belongs to the family of fish known as sparids, or seabreams. Sparid is a Greek word, meaning ‘golden head’, a fitting description for our snapper. There are about 140 species of sparids throughout the Atlantic, Pacific and Indian Oceans in temperate and tropical waters.

The European species most similar to our snapper is the gilt-headed bream or giltpoll. In Greek, the name is tsipoura; in Italian, orata; esparido to the Spanish; in Tunisian, jerraf or ourata; in Turkish it is cipura. Most of the names more or less mean ‘golden’, in reference to the colour of the head, and even the name bream comes from proto-Germanic, meaning to glitter, sparkle or shine.

The gilt-headed bream repeatedly crops up in the Classics and throughout history. In ancient Greece it was sacred to Aphrodite and there are many fanciful stories about this fish: for example, Pliny considered its flesh an antidote to poisonous honey. It would be a useful thing if a feed of snapper would sort you out if you happened to eat some dodgy honey during the tutu season, but unfortunately Pliny got that one wrong. 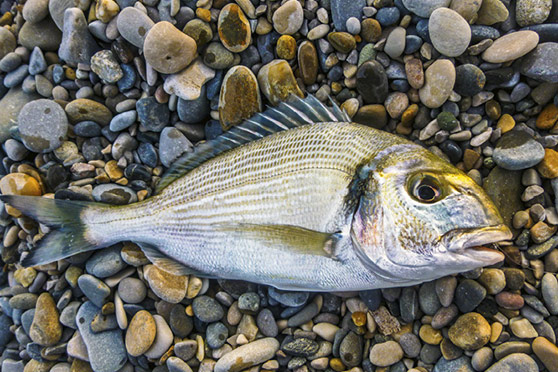 The European species most similar to our snapper is the gilt-headed bream.This one was caught off the French Atlantic coast, where they are called 'dauarade-royale'.

Gilt-headed bream were among the earliest of fish to be farmed in the Mediterranean, long before humans discovered how to artificially spawn fish in captivity. Conveniently, the young wild fish enter estuaries, coastal lagoons and ponds, which enabled them to be easily trapped and held until they grew to a good size. It was not until 1981 that Italian fish-farmers first successfully reared gilt-headed bream from eggs; today tens of thousands of tonnes are produced per year, eclipsing the catch of wild fish.

Snapper around the world

When researching the overseas relatives of our snapper I reached out to mates overseas, many of them fishing journalists in their own countries, to try and get a feel for some of the cousins of our local favourites. It seems like the Sparid family resonate with anglers world-wide, as I received some interesting replies.

One was from Gold Coast charter skipper Matt Johnson, who sent an image of an Aussie snapper with a great example of the huge head hump sometimes seen on the other side of the Tasman, noting that it was one of the “ugliest snapper that has ever been caught from his boat”. 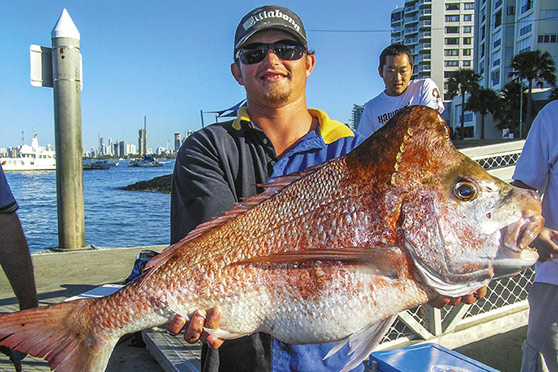 Gold Coast charter skipper Matt Johnson sent this image of an Aussie snapper with a great example of the huge head hump sometimes seen on the other side of the Tasman.

Smaller species of the Aussie snapper family includes several breams. Yellowfin bream and black bream both take small lures and are a lot of fun on light tackle in inshore waters, having been largely responsible in kicking off the soft-plastic fishing craze over there.

Bearing a marked resemblance to the pictured Aussie fish was a pic of a sea bream from Oman waters in the Indian Ocean sent by journalist Julian La Journade of the French magazine Voyage De Peche. This fish also features the humped head found in some Australian snapper. 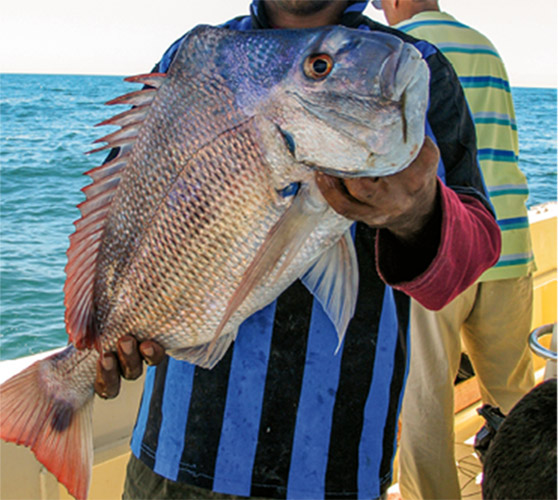 This sea bream from Oman in the Indian Ocean sent by French journalist Julian La Journade features the humped head found in some Australian snapper.

Another response was from the other side of the Atlantic in the US, from where an old mate, Doug Olander of Florida’s Sportfishing Magazine, sent an image of a pair of ‘sheepshead’, a shellfish eater popular with American anglers in the Gulf of Mexico, and looking for all the world like snapper in striped pyjamas. Sheepshead are shellfish eaters popular with American anglers in the Gulf of Mexico, and look like snapper in striped pyjamas.

Finally, what overview of the snapper family would be complete without mention of the importance of the red sea bream to the Japanese. And to New Zealanders, too. The most recent iteration of lure fishing for snapper here owes much to Japanese tackle developments aimed at lure fishing for their ‘madai’, techniques then imported to New Zealand.

Ichiryusai Hiroshige (1797–1858) was one of the last great Japanese ukiyo-e (print) artists. He portrayed a madai or red tai (red sea bream) with sprigs of sansho (Japanese pepper), in a set of fish prints published from 1832–4. The accompanying text is translated as “The red bream glows in the sea like a small sunset over water”. Could any snapper aficionado have put it better? Hiroshige was one of the last great Japanese print artists. This is his portrayal of a madai (red sea bream), a near identical fish to our snapper. 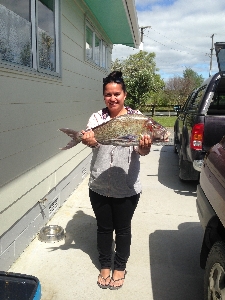