Snapper love to cruise shallow, inshore areas with plenty of structure, but targeting them with lures is often an expensive exercise for anglers. John Walkley spends a lot of his time in precisely these areas, and – through necessity – has worked out a number of ways to avoid snags. He explains…

We all know fishing can be expensive, despite what we tell our other halves. Most of these expenses are focused on the hardware such as rods, reels and boats etc, but with all types of lure fishing, the pointy end can also add up – especially when you lose several lures in a session. In the warmer months in particular, the snapper come in close to shore and some big boys cruise these areas, feeling safe from us in their fortress of kelp and rock. This can present some fantastic fishing for both land-based anglers and boaties alike.

One of my favourite forms of fishing is targeting the inshore shallows, particularly the rock fringes and shallow reefs which dominate our mainland and islands. The snapper at times can sit in hard on the structure – rock, kelp and many other jig head hungry obstructions. Take wash fishing for example. The closer you can cast into the structure, the more likely you are to get a hit. But with this comes the risk of getting a snag and losing expensive lures. Thankfully, there are ways you can protect yourself from snags and have the confidence to prospect even the wildest structure.

There are a few purpose-made weedless jig heads on the market. Some are articulated like the ones detailed below; others are worm hooks with added weight to the belly of the hook. However, these can be difficult to track down locally. The type I have been using exclusively for years (the same pack because I have not lost one to a snag yet!) is a TT snake head jig by Tackle Tactics. The only downside of these is they need a blob of super glue to secure the head of the bait to the kink of the worm hook. Even better than these, however, is the TT SnakelockZ which have a small amount of lead on the kink near the eye that firmly holds soft-baits. I have found these to be the best “snag-proof” option out there for soft-baits. They do not affect the action; in fact, because they are articulated, they probably enhance it. The tow point is also on the point of the jig head, which means even the jig head itself is less prone to catching weed or wedging under rocks as it just pulls through. 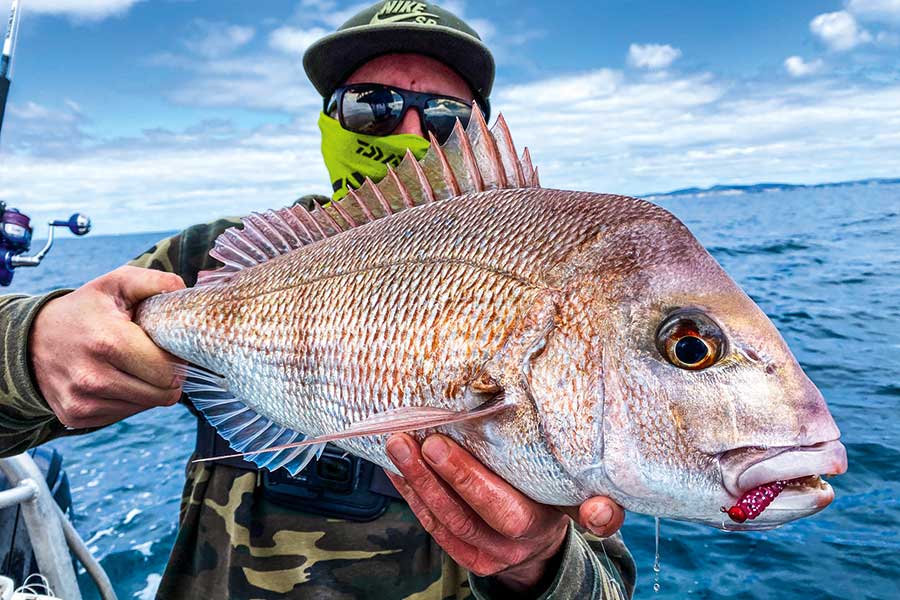 The slow sink-rate of a fluttering grub in tight cover can always raise a bite. When rigging these grubs on worm hooks, make sure you pin the tip back into the bait slightly.

There are two ways of creating your own snag-proof setup. First up, you need worm hooks and superglue to secure the head of the bait to the kink of the hook. Secondly, you need an appropriately sized sinker, round or bean. The tungsten bullet weights (Texas-rig bullets) are even better than sinkers if you can find them. Once you’ve got hold of your weight, slide it on your line above the hook and secure it in place with a small split shot, which will effectively make this rig fish like the purpose made jigs. You can leave the sinker free to slide, but this will produce a kabura-style action, though with a soft-bait instead of a skirt. If you look up Texas rigs in the States, you will see they use this style for bass, but it equally works on snapper. However, it may produce a few hang ups in heavy structure and potentially pull the bait away as the sinker will slide up the line as its dropping and pull the chasing bait. 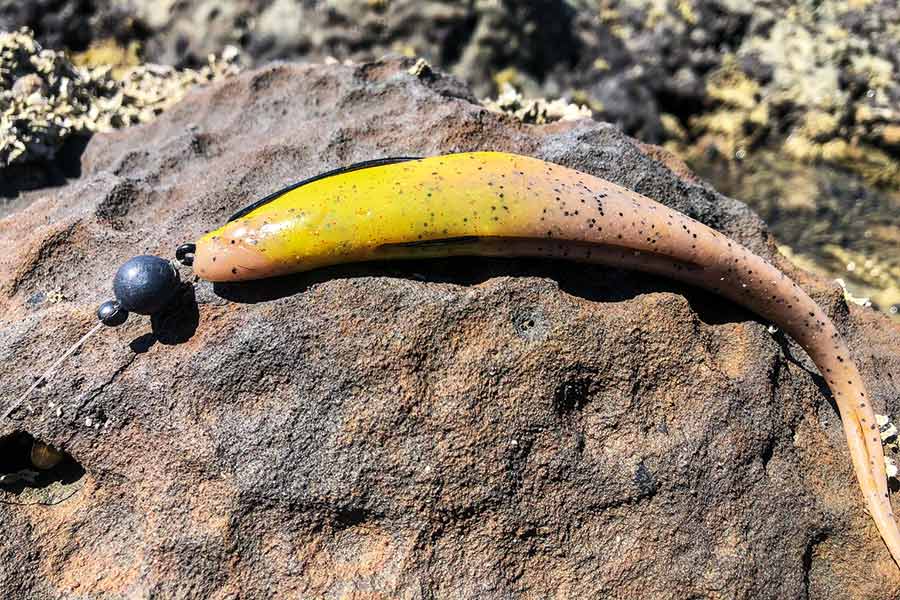 The DIY rig - the split shot stops the sinker from sliding up the line.

If none of the above methods are available to you but you want to fish the crazy stuff, you can still use a normal jig head and soft-bait combo by rigging it slightly different. Instead of threading the hook through the belly flap and then reversing it so the hook protrudes through the top of the bait, thread the hook through on a slightly downward angle so it protrudes at the base of the head section. You then can reverse the hook and embed it into the bait so the hook point is almost protruding. While this looks a bit average, it still effectively resists snags and weed. It is also a good setup for dragging soft-baits (if you’re into that). It may change the action slightly but will allow you to fish shallow areas with more confidence. 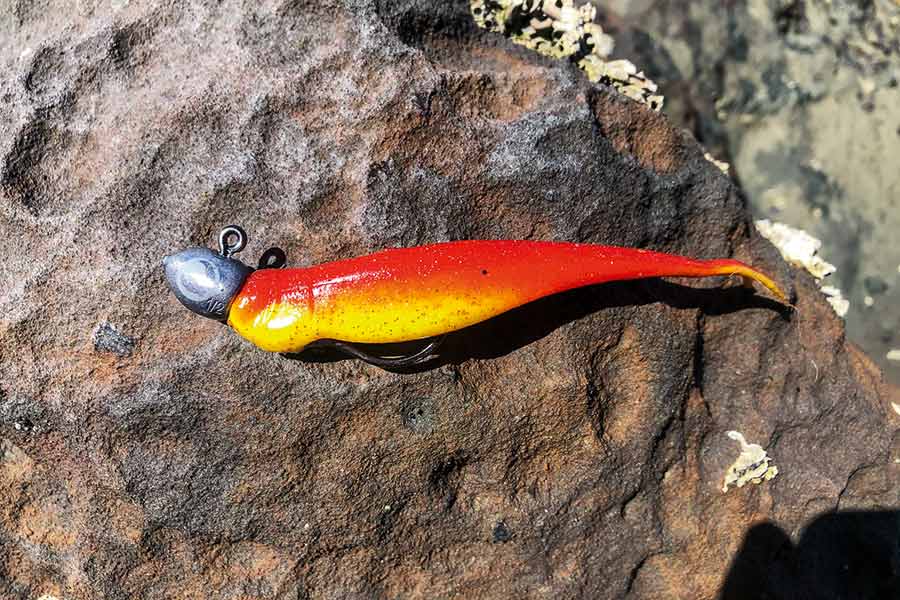 The alternate rig - the hook point is pushed through so it almost protudes through the top of the bait.

At first glance, it could be argued that burying the hook point in the bait or lying it flat across the top will affect the hook up rate. But in my experience, I haven’t found this to be the case. Once a fish grabs your lure and bites down and you strike, the hook finds its target just as well as an exposed one. 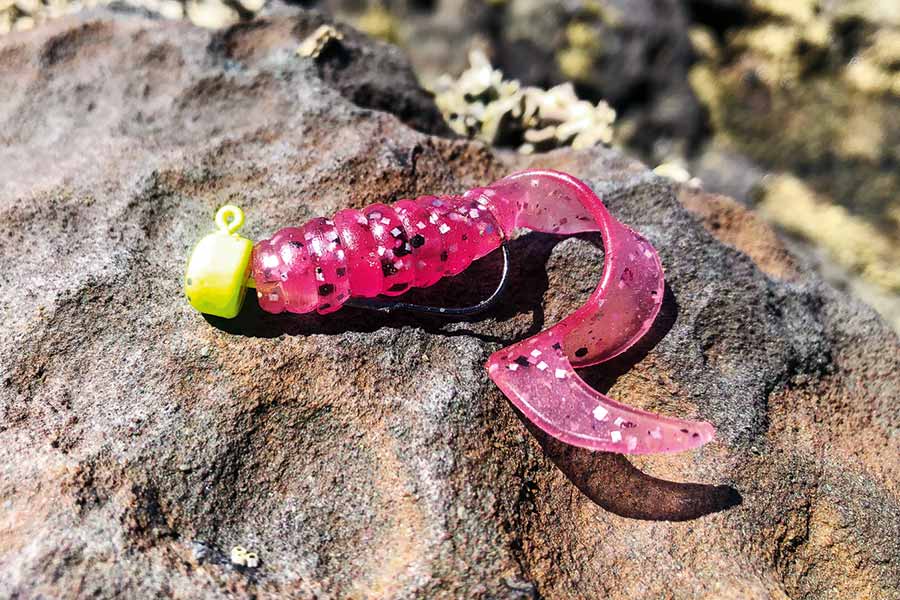 If you're into fishing ultra-light jig heads, you can also employ the alternate rigging methods on the Z-man Nedrigs.

Being able to prospect areas you would have previously avoided because they’re too nasty opens whole new areas for you to fish. In some instances, I’ll even land a lure on the rocks just to bounce it off the ledge so it sinks straight down the face. This allows the lure to get tight on the structure with stealth and it has produced some memorable battles. There is nothing worse than casting hard into structure and immediately getting snagged – we’ve all experienced this. It either results in a bust off and a retie or, if you can push in close and dislodge the hook, scaring the fish and blowing the spot. But if you can remove the risk of snagging, what’s stopping you from fishing the crazy stuff? 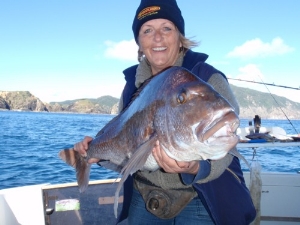