Slow Jigging with the Mussel Moocher

An adventure to the outer gulf with some new gear proved to be fruitful for keen angler, Jason Neute.

It had been a considerably long time since I’d fished with my mate Ronald. I received a phone call from him during work up season, which saw me putting aside my strayline gear and instead grabbing my slow pitch/micro jig sets. I don’t fish this way often, but when the conditions are right for a particular style of fishing, you have to take advantage of them. There had been a lot of talk throughout the fishing community of huge work ups in the outer gulf and I knew the slow jigging and soft-baiting season was upon us.

I first met Ronald about 10 years ago. His love of nature was evident from the amount of enthusiasm he had showed, and still shows, for being out on the water. When we are fishing, he will often stop the boat to watch and talk about the gannets flying, or the colours he sees in the different types of fish we catch. His appreciation of nature and ability to see the beauty and awesomeness around us is infectious. It’s great to be able to share the same values, and over the many years we have fished together, these have remained with us and only grown stronger. Fishing out wide always provides a freshness, stillness and remoteness that you don’t experience when fishing in close by the coast. At the end of a magic day out wide, we always feel grateful and content whether we have a full bin or not. 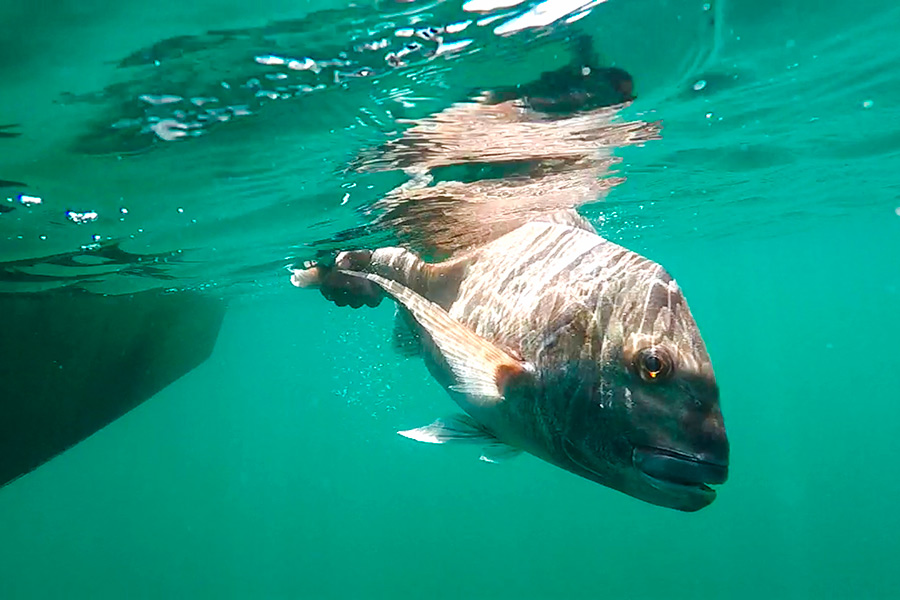 With a few moochers under his belt, the writer chooses to release his bigger catches.

This day the plan was, unsurprisingly, to head wide and we were hoping for a few of the workups that had been talked about so fervently in the fishing community. We also held hope for the chance of spotting dolphins and whales. At half seven we launched out of Stillwater and headed for the horizon. Tiri got smaller and the Barrier bigger, until Tiri was out of sight. Along the way we stopped off a few times when coming across sign, but as typical with Ronald, we would move on if nothing was biting. Slow jigs are ideal for a quick drop when encountering sign and are fast and easy to retrieve if nothing bites.

I tend to fish a little longer in a particular spot, but what I enjoy most about fishing with Ronald is knowing we will fish many more spots throughout the day. We almost always end up somewhere near the Barrier fishing in isolation as Ronald seeks out the serenity the outer gulf provides. Arriving at Colville, we decided to stay in that area a little longer. I was using a new jig called the Mussel Moocher that had just arrived at work. This is a cool and innovative jig which imitates a mussel and has a usual slow jig skirt. Better yet was the new bite light strobe that gave it bling; these two new features together worked a treat throughout the day. I hooked into something solid on my first drop but it didn’t stick, which was a real bummer!

With not a lot of bird action but plenty of fish sign, we were stoked to catch fish throughout the morning. But regardless of whether we are catching fish or not, Ronald still likes to prospect other spots.

In among the smaller fish, a few goodies came aboard. We were picking up some nice fish to 50cm on the drift, and then Ronald hooked something solid on his soft-bait set. It felt a little unusual and upon getting it closer to the surface, we saw that it was a little thresher shark. Late morning saw a few little workups, which intensified as the dolphins turned up, along with a small Bryde’s whale. With all the insane action, Ronald was on a high. We both took in the amazing sights, knowing how incredibly lucky we were to be amongst it.

With the sun slowly setting, the wind picking up and eight nice fish in the bin, we called it a day. Just as we started to leave, I could see gannets diving, which was too hard to ignore. We shot over for one last drop and once again, the little Mussel Moocher was smashed on the drop – but this time it stuck. My little Okuma jig rod loaded up and the reel began to sing; I was hooked up to the fish of the day. It felt solid with big head nods, and I knew then it was a monster snapper. 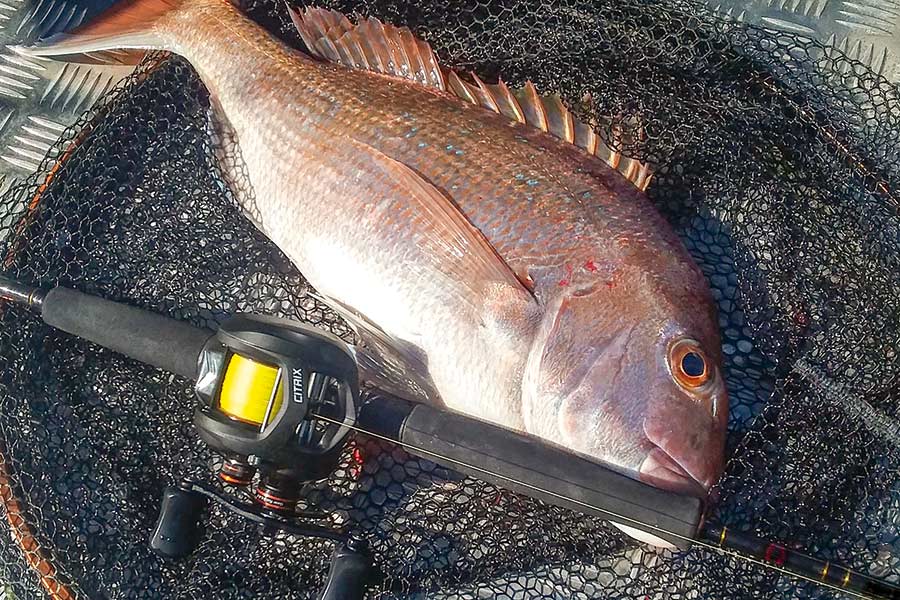 It was an awesome battle on the light gear. I was running a little Okuma Citrix baitcast reel on the new Tournament Concept 50-150 jig rod – a beautiful little set and perfect for this kind of fishing. I fought the fish for about 10-15 minutes, then out of the the deep green I finally saw the white of its belly. Ronald netted the big red and we finally hauled it aboard. It was well into double figures, so we took a few quick pics before watching him swim away back to the depths he had come from. I have caught my fair share of big fish and now prefer to put them back if they are strong and healthy.

What an epic day it turned out to be and having a few nice fish in the bin to provide our families with plenty of meat was a bonus. I will always cherish and remember this awesome catch up fish with my mate Ronald! The Mussel Moocher jig did the damage. 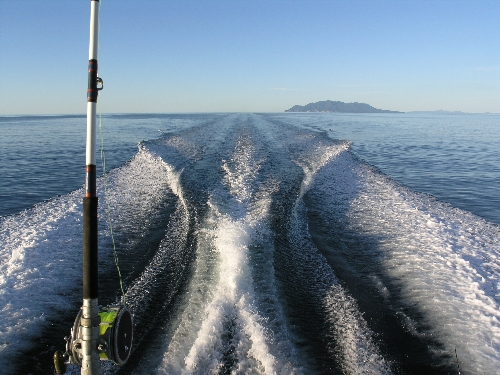