It is often said in recreational fishing circles that 10% of anglers catch 90% of the fish. If that is indeed true then one of those elite 10% anglers, and with the credentials to prove it, would have to be Northland’s Rob Parker, suggests contributor Bruce Basher.

Rob is, so far, the only contestant to twice win the week-long, annual Ninety Mile Beach Snapper Surfcasting Contest. Considering that around 1000 anglers contest this event each year, this sure is something special! His first win was on February 26, 2000 and turned out to be quite a drama.

One of the beach marshals misinterpreted the rules and tried to have Rob’s 8.4kg fish disqualified. In those situations, the weigh master has the final say and made the right decision, letting Rob take home the winner’s cheque for $50,000!

Rob’s second win was five years later, also on February 26! While the winning fish was a little lighter at 7.5kg, Rob believes this catch was more special.

Rob’s next big win was once again five years later in the annual Beach and Boat Contest fished out of Ruakaka, Bream Bay. He took the overall first and third prizes and his heaviest snapper, an 11.3kg fish, also won him the Furuno Snapper World Cup.

Only a month later he was fishing at Great Exhibition Bay in the Far North. Using a Tarakihi Terror rig, he hooked into and landed a personal best 15.5kg snapper!

Rob’s surfcasting career began when he was about five years old. His family moved from Te Awamutu to Dargaville after Rob’s father was promoted from prison officer to fisheries officer.

Rob’s special memories as a kid are from the times he spent with his dad fishing from a tinny.

“Catching large harbour stingrays taught me a lot about how to play big fish,” he says.

By his accounts, a lot of the time those rays towed the boat around!

“We took plenty of other fish home for a feed too.”

Rob spent most of his school days out of the classroom.

“I spent an awful lot of time wagging school and fishing Northland’s coastlines and wharves,” he laughed. “Any sort of wind with a bit of east in it and I’d be fishing on the west coast with my brother!”

While he probably didn’t know it at the time, this “on the job” education he was getting set him up for a successful career operating a full-time fishing charter. 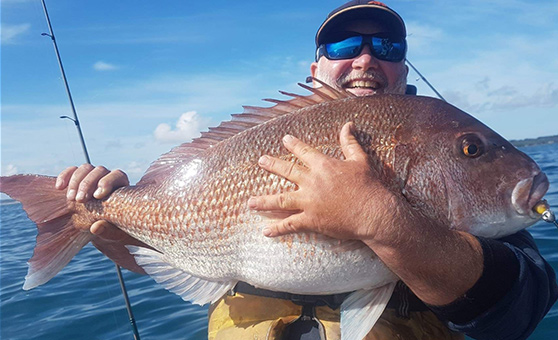 Rob’s first shot at the Ninety Mile Beach Snapper Contest was in 1993.

“For the first seven years I treated it as just a bit of a holiday and just enjoyed the fun of it,” he says. “I had a great time and caught a lot of fish.”

He then decided to have a serious go at the team’s event and got together with three guys over six-foot-tall, one of them his brother. In the decade from 1999 to 2009, they pretty much dominated the event. They were never out of the top three places and won four times.

Rob’s methodology for this contest is, “If you get among the majority, you’ll eventually catch the minority!” In other words, if you are catching a lot of smaller fish then sooner or later, you’ll get the big ones!

This philosophy has served Rob well, not only in fishing contests but also in his now very successful charter business, Houhora Charters. He does readily concede, however, that winning the Ninety Mile Contest does involve quite a lot of luck!

In 1981, the year before Rob’s father passed away, Rob remembers a massive “die off” of toheroas on Ninety Mile Beach.

“The area for about 10 miles south of Glinks Gulley was the worst with large snapper coming into the shallows to feed on them,” he says.

Rob and his father went after these snapper while using the dead and stinking toheroas for bait. Rob made up a huge bait and tried to cast it out into the waves.

“The rod was one I’d found at the dump, so I wasn’t expecting too much.” To the angler’s disgust he only got the bait out about 10 metres.

His disappointment didn’t last too long, however, as the rod bent over hard and Rob played and landed an 8.5kg snapper. This fish secured him the Junior Angler Heaviest Snapper title at the Northern Wairoa Surfcasting Club. Rob says this fish was the trigger that started him off on his snapper catching career.

In his mid-twenties, he decided to settle down and chase his passion by doing surfcasting charters. His love of catching big snapper first saw him branch out into fishing off the rocks and then into boat fishing.

This passion has now translated into Rob enjoying the sight of his charter clients catching big snapper too! 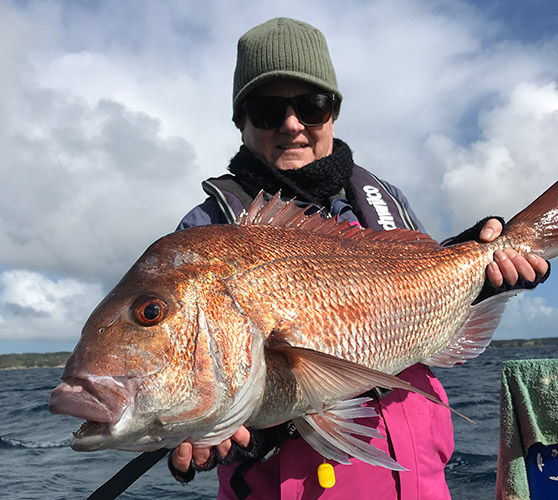 Many clients have caught their personal best snapper while fishing with Rob Parker, including Naomi 'Nod' Kininmont.

“I get lots of them coming back for more,” he says. “I must be doing something right!”

Rob credits some of that success to the special support he’s had from Black Magic, Daiwa and Ocean Angler – “Oh, and Facebook,” he laughs.

Rob has tried just about every type of rig ever invented but constantly returns to the single dropper rig. “I like its simplicity and it certainly catches fish,” he says. “It casts pretty well too!”

Rob believes that fish stocks have not got any better under the present system. “Anglers have to be a lot smarter now to succeed,” he says. “They have to get to know fish and water movements and seasonal changes to improve catches.”

He also believes success requires a lot more effort nowadays. “You can’t just hang about waiting for the best conditions,” he says. “Sometimes you have to go rain, hail or snow to make a success of it!”

Rob told me that his charter business really needs another boat so he’s looking for another Rob Parker to skipper it. At this stage, the interview broke down with us both agreeing that it would be best to stay with the single boat. One Rob Parker with his rather hard-core sense of humour is enough to deal with, that’s for sure!

The remoteness of the Mainland's West Coast has ensured its rivers and lakes have remained both productive and pristine, offering plenty of ... more >

Mainland angler Dylan Booth shares some of his best memories from fishing his local water – the Taieri River.... more >

Sam Mossman reviews the FC 465 CC, and has no complaints. Fish City have produced another fine boat which is perfect for inshore fishing.... more >

Herb Spannagl investigates the effects of UV on trout lures, and concludes that adding a UV coating to lures can be an effective way to catc... more > 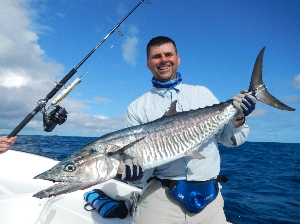