For many boaties with a knack for DIY, a boat project is something that starts with a hiss and a roar but quickly subsides to a time and money pit. Deputy Editor Miah Dixon met with Hamilton’s Jeremy Beange, whose motivation to get on the water as soon as possible pushed him to complete his boat project in record time.

As with many keen fishers and divers, Jeremy was looking for a vessel that ticked all the boxes.

On his wishlist was a hull that was smaller than six metres, was strongly built, and had enough weight to handle any weather that the West Coast could throw at him. It needed to be a multi-purpose platform that could easily switch between fishing and diving, and could comfortably accommodate three people – in short, it needed to be entirely fit for purpose. It also needed to come in at under $40,000 fulled rigged.

Unfortunately for Jeremy, the boat market for new builds didn’t provide the ideal boat that ticked his many boxes. Despite alloy being a common choice for rugged west coast beach launches and the clanging and banging that diving can bring, it was an older glass hull that piqued Jeremy’s attention.

The beginnings for Far-Canal were found on TradeMe – an unfinished Marksply 17 project from another boatie, who had begun the restoration until poor health got the better of them.

As Jeremy puts it “it was a perfect hull for the project as an older boat builder had already cut the cabin off and completely gutted the hull and floor etc.”. The prior work done on the boat left an ample open space – a blank canvas for Jeremy, an ex-marine engineer, to play with.

Jeremy selected the Marksply 17 for its strength and hull shape. “Due to the shape of the bow, it displaces the water extremely well and makes it the driest centre console under six metres that I’ve ever operated, and being a predominantly west coast fisherman, it needed to be a safe bar crosser.”

But before the re-rigging could proceed, Jeremy and his ring-in crew of various mates has no easy task ahead of them – re-glassing the entire hull, to Jeremy’s self-confessed “perfectionist” standards. 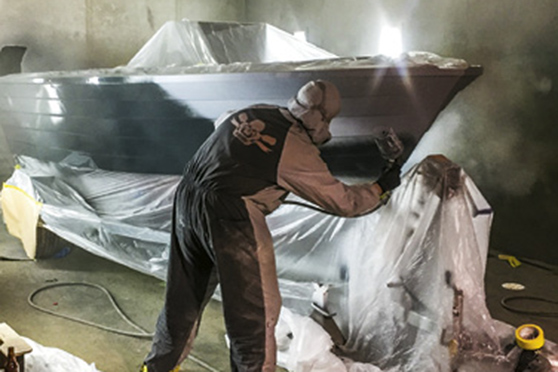 Far-Canal during the painting process.

In the process of re-fibreglassing and sanding the hull, Jeremy and his crew went through 40 litres of resin, about 500 sanding disks and sacrificed three vacuum cleaners to the cleaning gods.

An engine pod was also a part of the rebuild, providing extra length but also other headaches, with the new dimensions requiring multiple adjustments to the engine’s height and propping, proving to be one of the more challenging parts of the project.

In Jeremy’s own words, “it wasn’t easy, and a few times I sat outside my two-car garage looking holding a beer, looking in and thinking what the f*** have I started!? My garage was full of fibreglass dust, and resin was stuck all over my concrete floor, which didn’t help my OCD.”

The boat that Jeremy ended up with couldn’t be a further stretch from the one he purchased from TradeMe.

The first thing that struck me when meeting Jeremy and mate Alex at Manu Bay to look over the boat was how clean and well-finished it is. This, Alex tells me, is a testament to Jeremy’s attention to detail – Jeremy’s perfectionist nature hard at work again.

The paint job, completed by Dan and Grant at Greenville Auto Painters in Morrinsville, is, according to Jeremy, the ultimate in disguising his at-home fibreglassing job. The addition of a non-slip Speedliner on the sides and foredeck is not only practical but also adds to the polished look. The anchor well is simple and practical.

Far-Canal is a minimalist’s boat – there is storage under the floor behind the console, as well as an extra cooler bin in front of the console, but outside of that, the boat is clean and open. Rod storage is provided by a pre-fabricated stainless steel Ocean South T-top, purchased off TradeMe, which holds five rods, alongside the two rod holders in each of the gunnels. 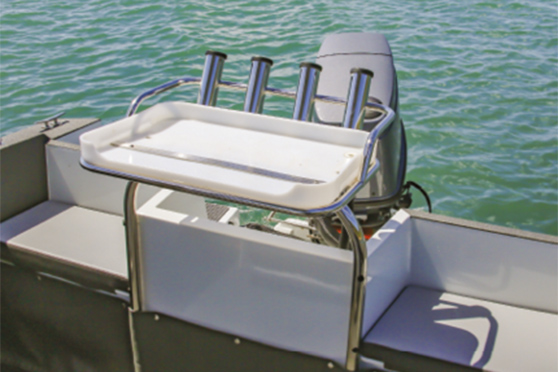 The stern offers a further four rod holders behind a sturdy bait board, as well as two additional.

Cold storage is courtesy of the main ice bin in the cockpit which is held down by a series of Railblaza mounts – ideal for keeping everything in place when navigating rough seas, but equally as easy to remove if the extra space is needed for diving. It also acts at the main seating in the cockpit, with an upholstered squab on top.

Given that the boat has no storage under the gunnels (bar a few rod/gaff/tag-pole racks), an extra cooler bin is mounted in front of the console to keep precious, non-water-friendly items safe and dry. Needless to say, having this minimalist kind of layout in a boat challenges you as an angler/diver to prepare well and only take the gear you really need. 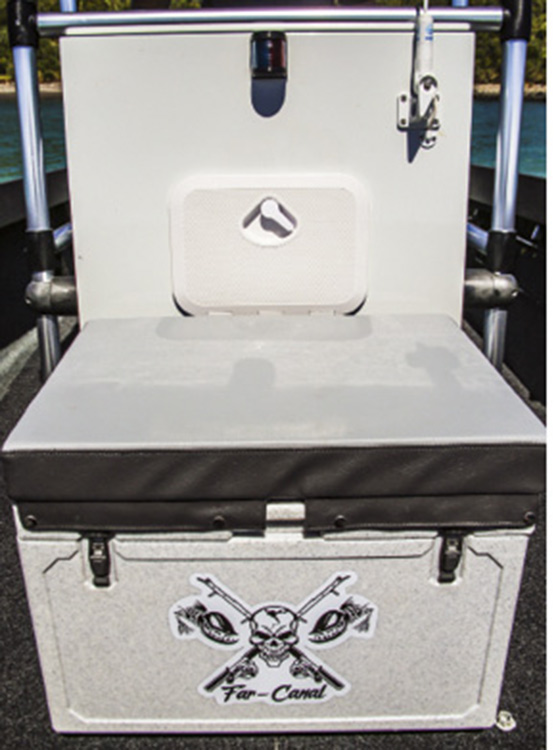 Front storage is courtesy of chilly bin, which can either keep extra fish/ice cold or keep items dry.

As mentioned earlier, Far Canal is powered by a 90HP, two-stroke Yamaha. Jeremy chose this particular outboard as it gave him the most power for less than the 130kg allowance after adding on the engine pod. On a calm day, her top speed is 30 knots. 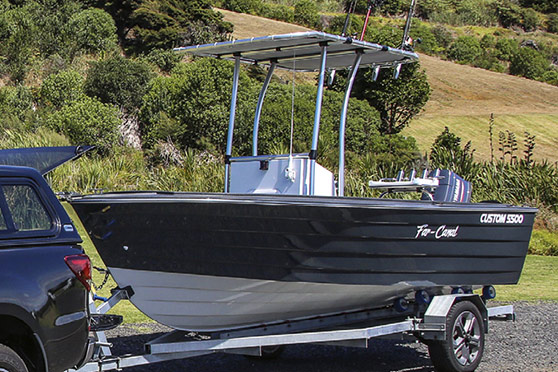 Far-Canal sits proudly on her trailer and is easily towed by Jeremy's ute.

As with any DIY boat project, Far-Canal is far from finished, with a new electronics system the next on Jeremy’s wishlist, to further hone her fish-finding abilities. But regardless, she’s already a boat worth of her name. 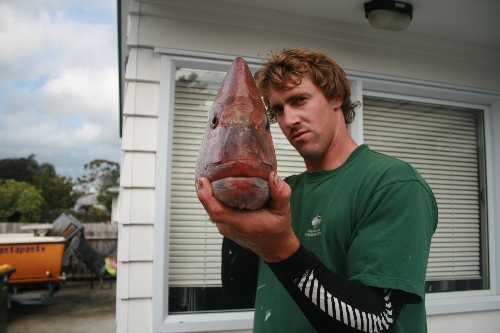