The simplest solution, and by far cheapest, is to go fishing with a mate who already has a boat. Your contributions to fuel and other expenses will always be less expensive than owning your own boat. But if you’re like me and like to do your own thing, this option probably isn’t for you, so read on.

This article focuses on the situation where you can’t afford that new, shiny boat. Instead, you either own an older vessel, or you’re looking at getting a second-hand boat with the vision of making it your own. This was the situation I found myself in earlier this year when looking at options for my 10-year-old aluminium hull.

A bit of context and background to my story will set the scene. Our family has always fished the west coast of Auckland, and until around 10 years ago the Manukau Harbour was our stomping ground in 14-16ft (4.3 to 4.9m) aluminium boats.

Sadly, around 10 years ago my grandmother, who encouraged my love of the sea, passed away. Given that fishing has always been a family activity, we saw no better way than to use some of her inheritance to further support our time together. Consequently, we upgraded to a basic Senator RH560, which extended our budget at the time. In memory of my grandmother, the boat was named <ITAL>Elma J<>.

Fast-forward 10 years, with almost 1100 hours on the engine and some epic missions under our belts, and we were considering a bigger boat. For obvious sentimental reasons and due to financial constraints, the more I looked into it, the more I was having second thoughts. Add to this, how much I rated the Senator RH560 hull for its ride, stability in bar crossings, ease of handling and the fact that I’d not long before had a custom aluminium trailer built, and I began to think that sticking with the current hull was a no-brainer.

This year, I chose an alternative to a new boat – a re-power, extensive refit of the interior and some aesthetic finishing.

When we purchased Elma J, we intended to continue using the boat predominantly for harbour fishing with occasional bigger missions. But as the 1100 engine hours indicate, it didn’t really happen that way. Before long, we were crossing the Manukau bar on more than a regular basis, chasing all manner of bottom-dwelling and pelagic species.

Although adequate, it was clear that our 115hp engine didn’t have the reserve power when those big west coast swells popped up behind the boat during bar crossings. When crossing a bar,  the common consensus is that there is no substitute for horsepower – you don’t always need it, but it’s nice to have when you do.

Using that premise as a base, my research started. I hadn’t realised the extent of my options and the consideration one must give to selecting a new engine –it was overwhelming. Horsepower, block size, economy, corrosion resistance, weight and hull ratings – the list goes on.

Without going into the nitty-gritty, I decided that 150hp was going to suit our needs nicely, which is a large engine for a sub-six metre aluminium trailer boat. After doing my research, a Mercury 150hp four-stroke engine well and truly ticked all of the boxes, with great reviews regarding power, reliability and economy.

After catching up with my local Mercury dealer, West Auckland Marine, we all agreed that this engine was the way to go and I elected to upgrade to the new Vesselview 703 unit, which functions as a comprehensive engine management system, GPS and sounder as required. A call to Senator Boats in Napier confirmed that, although not required, a few strengthening welds to the engine pod wouldn’t go amiss, allowing the hull to be rated for the 150hp. Mark from Alloyworks in West Auckland got on to the required work, and it was all looking very solid and ready for the new engine which was waiting to be fitted. However, before this could happen the interior needed a tidy up…

The interior – more than expected

After 10 years of full-on use with extras added to the original design, the inside of the cabin definitely needed a bit of a tidy up. I’m fortunate to have some very gifted and talented mates when it comes to metal work, and Dave Morrell from Accurate Sheetmetals is one of these guys. Dave was in charge of altering the dash console to fit the new electronics and do a general tidy up. A bit of advice: have a plan in mind but be prepared to adapt as required, as I discovered. Having already acquired the electronics I was wanted to run for my style of fishing, plus the fact that my budget wouldn’t stretch to full new suite, that part was sorted. I’d decided to add a few extra lights to the boat for our overnight fishing, including the new Hella SeaHawk flood/spotlight and some OceanLED underwater lights for attracting baitfish while sitting in the bays.

As a result, we needed three switch panels in a 5.6m boat where the dash isn’t intended for so many bits and pieces. As a result, rather than alter the dash as per the original plan, Dave ended up redesigning and completely rebuilding the helm station. The end result was perfect, seamlessly fitting all three screens, switch panels, etc. He even added in a recess for cell phones and other bits and pieces in the top.

With the extensive work required on the dash, we had pulled back a bit of the marine upholstery and here lay the biggest surprise and most unexpected cost. The marine carpet lining the cabin, after many years of being in the saltwater environment, had rotted. On further inspection, it was clear the salt build-up had begun impacting the aluminium deck underneath. I view this as a lucky catch, as we got it before any irreparable damage had occurred - definitely something I'd recommend checking for on older boats.

With the theory of ‘do it once and do it right,’ I got stuck in and removed all the marine carpet, grinding back the glue residue and any spots of corrosion. This was a messy job, to say the least.

Another lesson I learnt here is that if you can prepare or do simple tasks yourself, you will save the professionals time and subsequently save money. It can lessen any unexpected costs.

After a couple of days at Waikumete Upholsterers, I picked up the boat and upon inspecting inside the cabin was stoked to see that it was like jumping into a new rig. The job was mint, and things were starting to come together nicely. Now that the fundamental alterations had been made, the boat was back to West Auckland Marine for final fit-out. I think the most exciting time for me was the new engine going on the transom, which made it all seem pretty real. Based on physical size alone and a minimal weight increase, I could tell we were going to be getting improved performance.

Having all of the brackets fabricated and holes pre-cut made mounting new lights and the electronics installation reasonably straightforward. I think the biggest challenge for West Auckland Marine was wiring up all the various units and fitting them into the dash of a 5.6m boat! This is something I hadn’t considered, but with the right guys on the job, it came out looking nice and tidy, albeit somewhat busy. 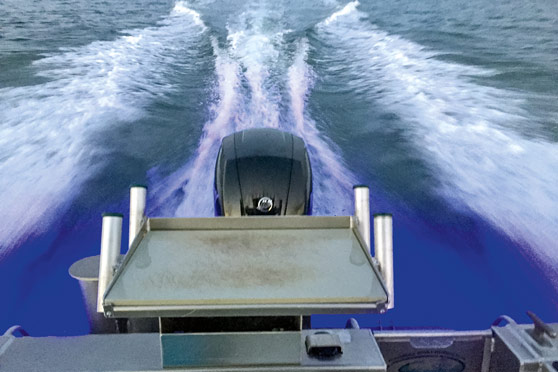 Everything was going well: underwater lights were installed, electronics were in the dash, but then we hit a speed bump. I had underestimated the size of the Airmar TM260 transducer unit I was upgrading to – my already tight transom was going to struggle to accommodate this beefy transducer. Well, that bright guy Dave was back on the job and after some nifty welding, managed to just fit it between the custom aluminium tuna tubes which extend below the rear platform to save space above the waterline. Some further customisation to prevent ‘rooster-tailing’ and ensure a clean flow of water across the transducer was also required. This is a significant consideration when fitting a new transducer.

As a final touch, and in recognition of all of the great people who were involved in the refresh, I got in touch with Glenn Kipling at Brave Design who came up with an outstanding yet practical wrap for the boat. The marlin and snapper represent our most common forms of fishing, while the simple strip along the pontoons is graced by those who support our fishing and have made the boat the way it is.

Getting back on the water

Some may ask how long all of this took. The short answer is, a long time! Approximately three months in total the boat was out of the water, which for me was a lifetime! All I can say is that following the refresh the boat is like new and I have no regrets at all. And, without a doubt, it cost less than a brand-new, fully-kitted hull.

As for engine performance, old versus new is like chalk and cheese. I am absolutely stoked with our wide open throttle speed going from around 27 knots to 36 knots, immense out of the hole power and improved acceleration and speed. The enhanced performance has already proved very useful in a couple of recent bar crossings.

Some fuel figures are provided below with a 16-inch, three-blade Mercury Enertia propeller, with two people on board, 150 litres of fuel and a full load of gear. All figures are marked improvements on the original 115hp four-stroke engine.

These figures are very pleasing, especially the trolling data for a pontoon hull which is pushing more water than a conventional hull off the plane. Both this and cruising speed (which also saw a marked improvement in economy) are zones where we spend most of our engine running time.

With additional crew on board and in rougher conditions, as expected, figures vary from those shown, but the differences are minor, and the figures are still very impressive. The overall fuel economy has improved by around 30% and, put simply, everything on is better.

The practicality and usability of the boat for our forms of fishing is second to none in my eyes, and I have no regrets about the alterations and additions we have made. Without all of my talented mates and their great support of our fishing, it wouldn’t have been possible.

If you’re planning on following this path, form good relationships with your local dealers and look after them – they will look after you if you are loyal.

As an alternative to buying a brand-new boat, a refit is a great way to fulfil the vision of whatever your dream boat it is. You can be fully involved, and it is fulfilling see an older hull transformed.

No matter how well you plan it, it will take longer than you expect and, as a result of this and unforeseen materials, it will cost more than you intend to spend. Have good mates to take you fishing in the interim and build in a decent contingency into your budget! 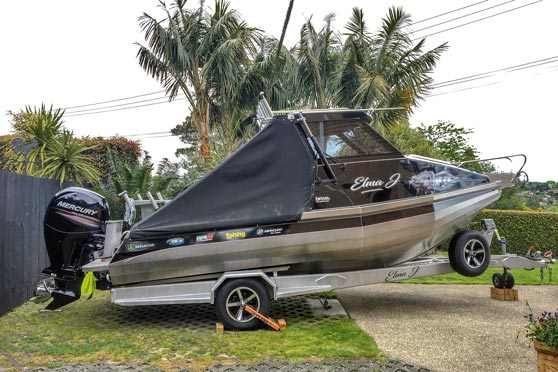 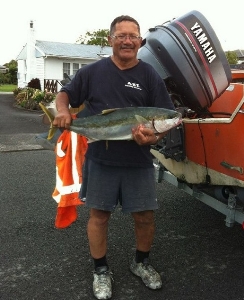 Kingi on a Kayak Rod - The Noisies