Pete Jackson is a well-known name in the New Zealand fishing scene, in particular out of Auckland’s west coast, where he almost exclusively fishes from his custom 8.5m trailer boat C CRAZY. Ben Francis sat down with Pete to talk about some of his achievements, what it is that motivates him and to delve into why some fish are just so much more memorable than others…

Over the years, Pete has pushed the boundaries when it comes to targeting certain fish and he has subsequently caught or skippered some impressive captures. These include the first recreationally-caught swordfish on Auckland’s west coast (and potentially on a trailerboat in New Zealand), as well as various NZ and world-record fish, all of which are special to Pete for their own reasons.

Over a cuppa, the stories flowed and I quickly gained some insight into why Pete is so successful. A prime example of this success – being the most recent notch in the belt – is a 183.4kg blue marlin that he skippered for angler Dez Meinhold on the west coast in mid-March.

This story starts with one of the most settled periods of weather the west coast had seen that season. Pete and Dez were heading out for an overnighter to the sword grounds on C CRAZY, with the plan to troll a few lures on the way out. Well, long story short is that the boys never quite made it out to the swordie grounds because they got somewhat ‘distracted’ along the way. The first deviation to the plan was when Pete saw a scattered work-up and, after working the area for a while, had a nice stripy pop up. A clean hook-up followed, and Dez was on the handle. A short time later, the job was done with a solid stripey (estimated at 115kg) swimming away with a tag firmly in place.

The course to the sword grounds was once again set and Pete was out the back rigging up a couple of fresh sword baits when the well-known howl of a Tiagra started up again. Jumping into action, Pete grabbed the wheel while Dez cleared the gear out the back. This is when Pete noticed the fish showing the signs of a blue. Pandemonium followed as the water erupted with a nice blue marlin clearing the surface and doing the typical grey-hounding they are so well known for. Dez was strapped in for the fight of his life – little did they realise it would be 6.5 hours on 24kg tackle before it would end.

With the intention to tag the fish, the boys worked hard and had a couple of near-opportunities close to the boat in the early hours of the fight. However, with the fish being stubborn and only two people on board, they could never quite get it close enough for a tag to be placed. It was late in the fight when Pete’s worst fears were realised – the fish was heading straight down and dying. An already-exhausted Dez got to work. Slowly but surely, they lifted the fish to the surface, and it was finally boated well into the evening. There was a very tired and sore angler on board, but he was still smiling! Although the plan was for the fish to be tagged, it wasn’t to be. It instead ended up in Pete’s own smoke house, the results of which are something the writer can attest to being quite spectacular. Dez Meinhold with the first fish, a tagged and released striped marlin, caught during a remarkable day out west last month.

When Pete was telling this story, it was very clear that despite catching an excess of 25 blue marlin on the east coast on his old boat KNEECAPT, many of which were larger than this one, the west coast blue was by far the most memorable.

Having fished out of the Manukau for decades, to finally catch a blue marlin on your home patch is something special and I get the feeling it won’t be forgotten anytime soon.

What is it that makes some catches so special?

There are many anglers who will be able to relate to the factors that make some of Pete’s memorable catches stand out. As mentioned, he has always pushed the boundaries and continues to do so. As a result, when a goal is realised, be it to catch the first or biggest of a species in an area, the sense of achievement can make the catch extremely special. However, Pete says that it is more often the company and sense of camaraderie that will make a catch stand out.

It is not often these days that Pete winds the handle himself, instead electing to get the thrill through helping others fulfil their dreams, whether it be by catching a big bass, marlin or swordfish. There are too many names to mention but Pete has a group of good mates who have plenty of laughs along the way while catching some impressive fish. The biggest factor in making catches memorable though is family, and when you see the pictures of Pete’s wife Stacey and their boys Jed and Marshall on his image covered shed wall, the smiles say it all.

As you stand looking at the pictures you realise there are many memories to choose from – too many, in fact, for this story. As such, in the short space available below, a summary of only Pete’s most memorable moments are given.

The First Recreational Swordfish for the West Coast

For a couple of years, Pete had been heading out into the Tasman Sea well off the coast of the Manukau in search of broadbill. This is not for the faint hearted – there are no islands to hide behind and a very wide expanse of ocean (yes, he was definitely pushing the boundaries in a trailer boat back in those days). It all came together one night in 1988 when Pete and his crew landed a 98kg sword. While he has since eclipsed this fish in size, he still recognises this swordfish as the most memorable due to it being a first on his home patch and most likely the first trailerboat- caught swordfish in New Zealand. 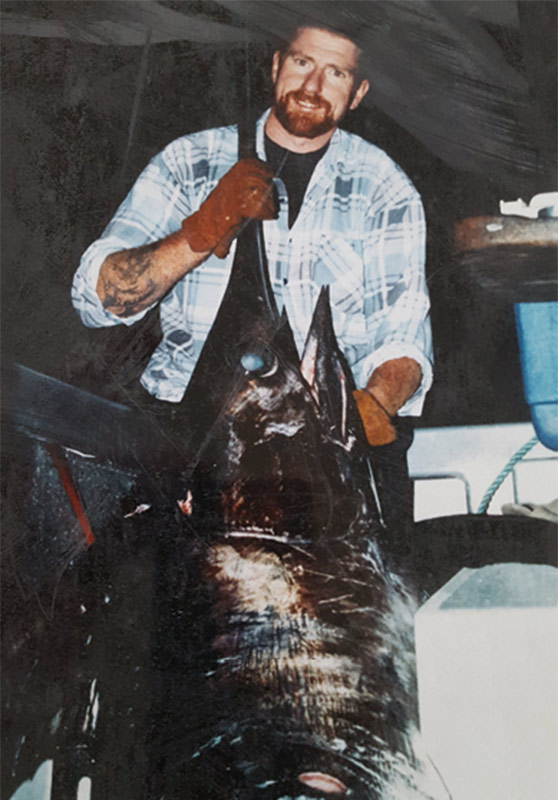 Another first for Pete - a trailerboat caught west coast swordfish.

While trying to continue his run on night time swords, it was surprisingly a bluefin tuna that took the bait one night. This unexpected catch weighed in at 198kg and was subsequently ratified as a NZ and world record at the time. Funnily enough, Pete travelled down to Greymouth a few years later and broke his own record with another big bluefin! 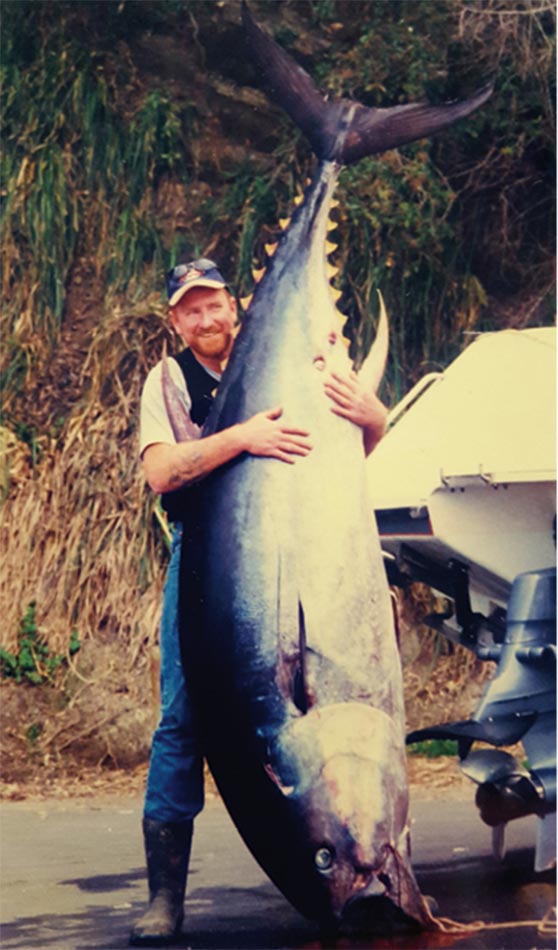 This bluefin tuna was a world record at 198kg - another special west coast capture for Pete.

Beyond chasing pelagics, big deep-water species are a passion for Pete. While many people target deep-water fish with little success out west, C CRAZY regularly comes home with some very nice table fare, including hapuku, bluenose and bass.

The biggest of the bass have been up to 80 kg, which are serious fish and not common regardless of where you are fishing. Once again, it is catching them on the home patch that makes these so special to Pete. Pete has skippered many anglers to striped marlin over the years with a real focus on looking after the fishery, encouraging tag and release where possible. Although it is almost always the angler’s choice, most elect to release their fish. Highlights for Pete are watching his wife Stacey, son Marshall and close friend Merv Wardell releasing multiple stripys when out on the west coast fishing together.

This image is of a tease-and-switch stripy just after the bite. 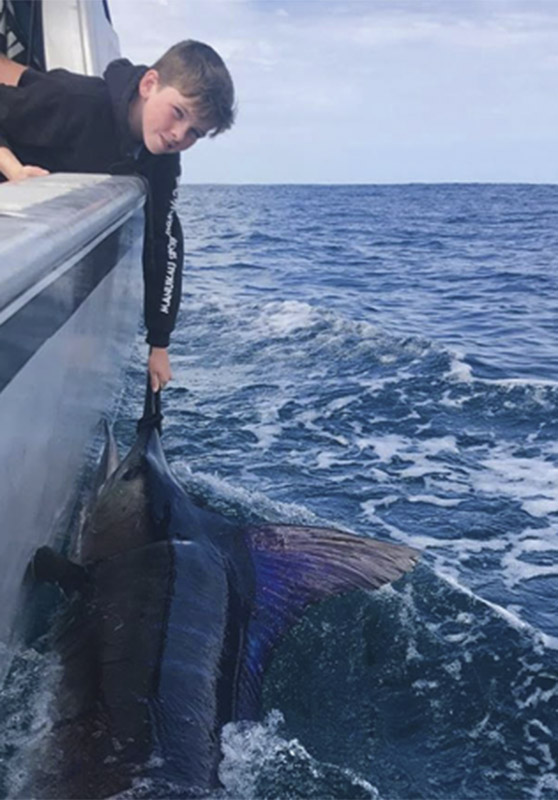 Marshall Jackson with a well conditioned stripey, ready for release.

One of the more recent highlights for Pete was with well-known fisherman Tony Carpenter when they went out looking for a record for Marshall, Pete’s youngest son.

Fishing the bait in close, a nice fish took a liking to the C CRAZY offering and it was all on. Using a Shimano Talica 25 spooled with 15kg line, young Marshall expertly worked the rod and earned his striped marlin, which was a NZSFC Small Fry line-class record. Watching Marshall following in his footsteps was a proud moment for Pete. It was the annual Westcoaster fishing tournament in 2017 and the whole family was onboard with good mate Mark Cameron also along for the trip.

Now when you are out wide of the Manukau, you would not expect to hook a wahoo, a species that prefers tropical climates. However, this is just what smoked the small skirted lure and after a short fight, Marshall had created history on the west coast with a 28.6 kg wahoo, which qualified for a NZ Small-Fry record.

Many people, including myself, may look at the achievements outlined above and compare them to their own, asking themselves the question “what is it that helps someone like Pete catch so many impressive fish?”

Well Pete has one saying in particular that resonated with me. He calls it the four P’s: Preparation Prevents Poor Performance. Attention to detail from the get go, choosing where you’re heading, what method to employ, selecting high-quality tackle and keeping it well maintained – it all comes together to create successful fishing results.

If it’s not happening for you, don’t give up the game too early as everyone has runs where they aren’t catching. It may be that the fish aren’t feeding or you’re not presenting the right options. The past couple of years, Pete has picked up tease-and-switch fishing which is now his preferred method of catching striped marlin, especially when they are being fickle on lures. It requires a real team effort with all people having a role to play. It’s also really visual, with the fish being all worked up and the bite right at the transom.

He recommends that people restrain from over analysing things and keep it simple. Do what works, listen to those who consistently do well and trust your instincts when it comes to looking for the signs of any given species.

Who knows – give the philosophy a go and you may start making your own special memories on the water! One each. - Kenepuru, Marlborough Sounds