In the first of a three-part series on scallops, commercial fisher Ben Carey looks at the species available in New Zealand and where to find them…

Scallops – we New Zealanders just can’t get enough of them. Whether they are crumbed in finely chopped macadamia nuts, wrapped in streaky bacon, or even cooked up the old fashioned way – on the hot pan tossed in garlic butter – freshly caught scallops are a great Kiwi summer treat.

A few years ago, I was invited to go back commercial fishing for the reprise. I was going to be crewing for a friend of mine, and with the offshore oil and gas industry winding down for the winter, it was a good opportunity for me just to escape it all and get back to doing what I love to do best… fishing!

Here in New Zealand we have three different types of scallops. Alongside the New Zealand common scallop, we also have lion’s paw scallops and a unique deepwater scallop called a queen scallop, which can be found in the rich pristine waters off the South Island’s east coast – but how much do we really know about these three species? Scientist conducting a scallop survey in order to measure the stock levels and determine the fishery's health.

The lion’s paw is a fascinating type of scallop. It’s shell is both concave and rounded, sort of like a golf ball. Being small, you can imagine they’d be quite tasty, but to be honest, I have never actually tried them.

Lion’s paw scallops can be found in quite a few places around New Zealand. I’ve heard of them turning up in areas off Little Barrier Island, the western seaboard of the Coromandel Peninsula, Waiheke Island in the Hauraki Gulf and in the Bay of Islands.

A friend of mine reckons he’s seen them dredged up from the Foveaux Strait during the commercial Bluff oyster season, but I can’t say I have ever heard of that before or if there is any truth to it. As far as I am aware, there is no commercial or recreational fishery for them, no size limit, and as a matter of fact, neither the fishermen or the Fisheries New Zealand scientists know much about them either.

As they have a smaller shell, you’d think they wouldn’t have much meat, but looks can be deceiving. The one we dredged up from the outer Hauraki Gulf seemed to grow and fill the whole shell. They come up on the sorting table regularly, which just goes to show how much we are yet to explore out there.

There must be recreational divers out there who know a bit about them, and if they do, they certainly keep quiet about it.

When you look at the various types of commercial and recreational dredges out there, you can certainly see why not many are caught because they most likely pass through the mesh as it’s being towed along the bottom.

Queen scallops are interesting creatures. They are a deepwater species found on the east coast of the South Island, from about Kaikoura right down to the Otago coastline, and in around 110 metres of water.

Their shells don’t seem to take on one colour and can look anything from red to yellow, right up to a peach type of colouring. You do not get them in the North Island as far as I’m aware, or the South Island’s west coast for that matter. They seem to like the cold nutrient rich water off the east coast. 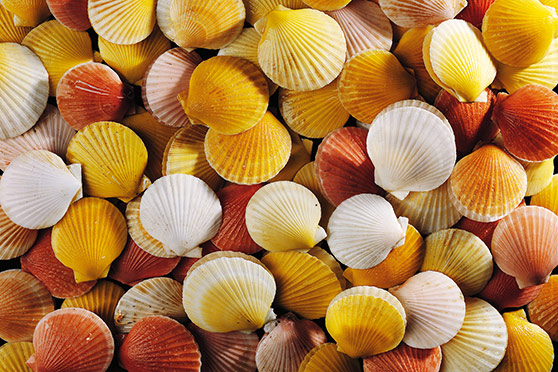 Queen scallops are a deepwater species not normally targeted recreationally.

Queen scallops are smaller than their common cousins, and the ones I have seen were about 60-65mm in length or thereabouts.

I have seen them at the local supermarket on occasions, so there is certainly a commercial fishery out there for them. I have also seen them advertised as New Zealand queen scallops on restaurant menus throughout New Zealand. I am unsure whether they are actually targeted or caught as bycatch, but my bet would be they are caught as bycatch by deepwater trawlers.

The common scallop is the shellfish New Zealander’s have all come to know and love, and this mostly comes down to their taste. I personally love them coated in Fogdog Japanese Panko Breadcrumbs and shallow fried.

Scallops are found in most east and west coast harbours and inshore waters from the top of the North Island, right down to Fiordland.

In most west coast harbours such as the Manukau, Raglan and Kawhia, the scallops will tend to be found on the edge of the banks where they can be picked up at low tide.

Good areas off Kawhia in the past have been on the edge of the main channel just out past the Kawhia Wharf and near the Margaret J tug and barge; however, if you look at any chart you should find a number of likely looking spots.

In the Coromandel fishery, the scallop beds can be found from the outer islands of Coromandel Town right up to Colville in depths of four metres and greater, and around the eastern seaboard, from the Mercury Islands to Whitianga, with scallop beds also scattered down past Slipper Island and into the western Bay of Plenty. 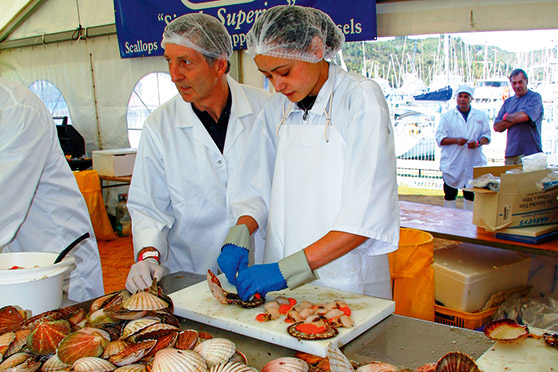 OPC staff opening scallops at the annual Whitianga festival dedicated to the delicacy.

Most scallops in the Coromandel fishery are found in sheltered bays, from the low tide mark out to about 50 metres deep on soft sediments such as sand, shell, gravel and silt.

Areas such as Opito Bay often provide a quick dive for scallops in 8-10 metres of water, and they can be of a very good size in November and December. However, it is an area that takes a hammering from recreational divers and dredgers. At Great Mercury Island, Bumper Cove also tends to have an abundance of scallops from time to time, and the main beach on the inside of Great Mercury Island at Home Bay holds scallops as well.

The deeper water in Bream Bay off Langs Beach will produce scallops, and the Whangarei Harbour hosts several good beds.

Matapaua Bay is also good for a scallop dive, especially on the sandy bottom near the rocks but sometimes you’ll have to contend with the green weed and dig your way through it. If you get onto them, the shells are big and plump.

By pulling out any marine chart of the New Zealand coastline, you should be able to identify a number of likely looking spots. On your chart plotter, symbols such as ‘S.bkSh’ indicate sand and broken shells, which can be well worth exploring with a dredge if you are new to an area. Do prospecting tows in the general surroundings, especially in areas that have a white sandy beach adjacent to them. If these areas are sheltered or semi-sheltered and there are slight banks in the area, they are even more likely to produce scallops.

In Part II, we look at the lifecycle of a scallop, their growth rates, plus a few interesting fun facts about a species we all know and love to eat.