Today Maxwell is one of the largest windlass brands in the world, but long before attaining such lofty heights the company first began as the brainchild of a Kiwi gent by the name of Graeme Maxwell Cundy.

Fifty years ago, after having served his apprenticeship at the New Zealand Naval Dockyards in Devonport, Auckland, Cundy started to design and manufacture sheet winches for the active and rapidly emerging yachting market in New Zealand. Back in the sixties New Zealand was subject to import licensing and tariffs on boating equipment which forced many Kiwis to come up with innovative solutions for their marine gear. Cundy, with that legendary Kiwi ‘fix anything with a length of #8 fencing wire’ mentality, incorporated Maxwell Winches in 1969 and over the following years it grew to be the world’s third largest manufacturer of sheet winches, even receiving the “Prince Phillip Award for Industrial Design”, which was given to Graeme in person by His Royal Highness.

With an eye on expansion, Maxwell Winches gained a foothold in the American market in 1978 with the establishment of Maxwell Marine Inc. in Southern California. Continued growth and opportunity called for a further expansion of the Maxwell range and so the anchor windlass was introduced. In 1983, Maxwell-Nilsson Marine was formed by the merging of Maxwell Winches and Nilsson Anchor Winches, another New Zealand marine company. April 1985 saw the outright purchase of all anchoring systems and designs by Maxwell and the name Nilsson was dropped. By the late 80s the Maxwell Winches Company began to be known for both its sheet and anchor winches. The late 80s also bore witness to another important stage in Maxwell’s development and a pivotal shift in the industry: the design and release of the world’s first rope/chain windlass. Splicing or shackling the chain to rope allowed for uninterrupted retrieval, which was something that had never been possible prior. By the early 90s the mounting success of the anchoring systems saw the windlass side of Maxwell rapidly eclipse the sheet winch market.

Although Maxwell continued to manufacture sheet winches until the mid-1990s, the production of anchor winches had already taken precedence. The decision to cease the manufacture and sale of sheet winches was made in 1995 and the tooling and remaining parts were sold to an Australian company in 2004.

As Maxwell’s growth continued into the new millennium two more New Zealand manufacturing companies were acquired: Weaver Hatches and Southern Ocean Ropes (SOR). Weaver Hatches became Maxwell Hatches and many of the offshore and inshore models continue to be manufactured today under the VETUS branded “Altus” and “Magnus” models.

On February 23, 2008 the well-known Dutch boating systems and engine manufacturer VETUS purchased Maxwell, and the Company became known as Maxwell Marine International Ltd or VETUS-Maxwell APAC (Asia/Pacific) Ltd and began operating as part of the VETUS group of companies. This combined entity alone employees 36 staff in Auckland and Brisbane, which in turn serves over 20 countries!

2008 was the start of a new era for Maxwell. Becoming part of the VETUS group precipitated tremendous growth for the company in the European market in the power, sail and superyacht range. The New Zealand engineering team responded to this growth and the changing market with the introduction of several new rope/chain windlasses and an increase in their SY capabilities.

In keeping with their long history of innovation, the Maxwell engineers in Auckland designed and manufactured the largest windlass test-rig in the Southern hemisphere and (to our knowledge) the world. This allows for Lloyds testing and QC on the complete range of Maxwell products, which ranges from an RC12 (for 10-20 metre boats) all the way to an SY44 (for boats 100 metres or more)!

Fiercely defensive of Maxwell’s quality and reputation, the New Zealand-based team continues to work closely with all types of boaties – from trailer boats and pleasure yachts to commercial charters and military vessels – ensuring that Maxwell engineering and product development remains as dynamic and innovative as the industry it serves. 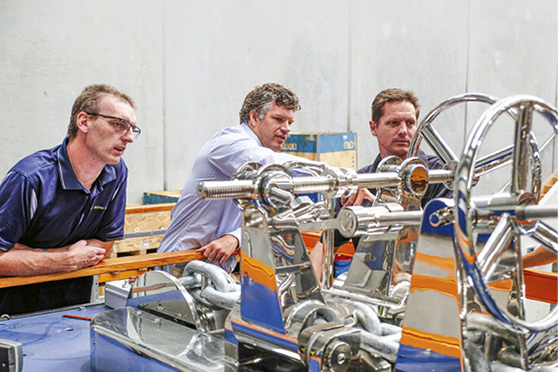 Fiercely defensive of Maxwell's quality and reputation, the New Zealand-based team continues to work closely with all types of boaties ranging form trailer boats and pleasure yachts to commercial charters and military vessels.

In 2018, Maxwell’s head office in Auckland relocated to a larger facility (nearly twice the capacity of the previous facility) on the North Shore, and as the marine market continues to grow across New Zealand and the world, the future remains bright for Maxwell for its next 50 years. Great winters day on the rocks - Off the rocks