Marlin from a Tinny Chasing marlin takes Hauraki Gulf charter skipper Nick Jones a little out of his comfort zone, and doing it from a small alloy dinghy only adds to his angst…

The alarm had caught me in a deep sleep, but that was no surprise – it was 3am. I’d hatched an audacious plan with fellow Hauraki Express skipper George Bourke to go catch a marlin on our day-off. Why was it audacious? We would be fishing from George’s 4.3m Extreme tinny Midnight Snack, we only had a single day to leave and return to Auckland, and we’re self-confessed gamefishing rookies. Although we’d caught a few gamefish between us, we’re far more at home chasing snapper and kingfish around the Hauraki Gulf.

We figured it would be much easier to livebait than troll from a 14ft boat, so earlier that week I’d popped into the tackle shop Yeehaa to pick marlin-nut Luke Davis’ brain on livebaiting tactics. Luckily for us, he even had some recent intel about an area where a few autumn beakies had been congregating – and best of all it was within striking distance for our modest vessel.

So, there we were, loading up the diminutive Midnight Snack at sunrise. Our 50w game-sets attracted some suspicious looks from another boat launching at the ramp, but we weren’t fazed – the weather was good, and we felt ready to head offshore and give it a crack. We made a quick stop and grabbed a couple of jack and slimey mackerel as back-up livies on the way out before George set a course for the deep blue yonder.

Arriving at our destination, we found a few shearwaters, gannets and humans working the general area. We chucked out a couple of skippie lures and set about mowing the lawns. It was a sluggish start to proceedings, as we were made to wait over an hour before we snagged a tasty wee skipjack tuna. He was quickly rigged up and sent back over the side.

Now we were in the game, we relaxed and enjoyed a morning snack. Just as I was reclining on the small bean bag we’d conveniently brought along for the trip, George said, “Wow, check this out”. He’d spotted a big arching shape 50 metres down on the little Garmin sounder, and we both agreed it looked pretty damn good. Not 30 seconds later, the rubber band holding the bait pulled tight and cracked off the outrigger. The predator let go of the bait, before taking it again as I pushed the lever drag to strike. Line started peeling out and just when we thought we were hooked-up solid, the line went limp.

An examination of the trace showed the prime suspect to be a marlin, with clear bill rash along the first metre of leader. 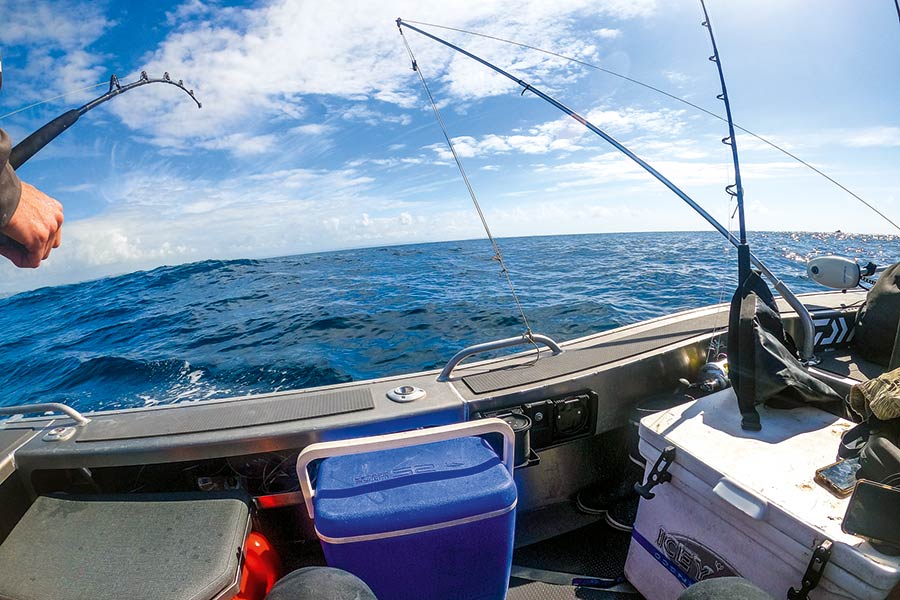 Room on the little boat was at a premium during the fights.

“Ahh well, plenty of the day left,” was the call, and we decided to bomb down a big mac to see if his royal billness was still hungry. Alas, our slimey offering was declined, so we decided to catch another skippie. Luckily, this time it only took about 20 minutes to snag another tuna. My lack of skippie rigging practice meant he was sent back over the side with a slightly bung eye, but he was swimming strongly half an hour later as we discussed who should be on strike. George was keen to skipper the first marlin for the Midnight Snack, and I was more than happy to be on the rod!

“Cheers moite,” was the call as the line angle started heading to the depths and it became obvious our cyclops skippie had been consumed. This time we found ourselves properly tight and it was clear the big circle hook had hit home as the reel howled. The fish headed to the surface and quickly identified itself with a thrashing bill doing the classic windscreen wiper – the lads were seriously on!

After a flurry of exciting acrobatics, the fish settled down. It all went surprisingly smoothly for the next 15 minutes as we slowly made ground on the fish. Excitement levels rose again when George had hold of the leader – the fish throwing a tanty, scratching up the side of Midnight Snack, and almost jumping over the low gunwales into the boat at one stage! But George stuck it out and before long we had a hold of our prize. Man-love and photographs ensued, before we thanked the average-sized stripey for the fight and released it back into the wild. Bill scratches on your boat are cool - let the stripie go for it.

Even though we were over the moon, the day was young, and we decided it was George’s turn for a crack. The skippies agonisingly teased us for another hour before we had another bait deployed – this time rigged and presented in a more appetising manner. Confidence levels were sky-high, and when we saw a couple of free-jumpers nearby we almost knew another bite was inevitable. And sure enough, the rigger clip popped as another beakie engulfed the bait. Once the hook was set, the fish really went for broke and started greyhounding out 200 metres in-front of us – straight towards another boat. After a bit of anxious waving and yelling, this boat cleared off and we enjoyed the spectacle. George was soon huffing and puffing, suggesting this fish was a bigger unit, or George was just a bit unfit. Hooked up and puffing.

When we got near the wind-on, the fish powered away a couple of times before succumbing to the leader. The fun was just beginning though, as the chunky fish proceeded to do wide circles under the boat and George cut the engine just in the nick of time as the leader came around under the prop. The fish broke the surface, and I grabbed the bill which marked the beginning of round two of celebrations. After the obligatory photo session, some more mana-enhancing bill scratches on the Extreme logo and a few chahoos from a well-nourished lad on a big Riviera watching proceedings, we rolled the circle hook out and released our second striped marlin of the day. Unreal stuff! We bobbed about for a few minutes, letting it all sink in. It was one of those days where I’m sure if we kept fishing, we would have had another chance or two, but since we were both incredibly satisfied, George pinned it home at WOT and we were back on land by 2pm. 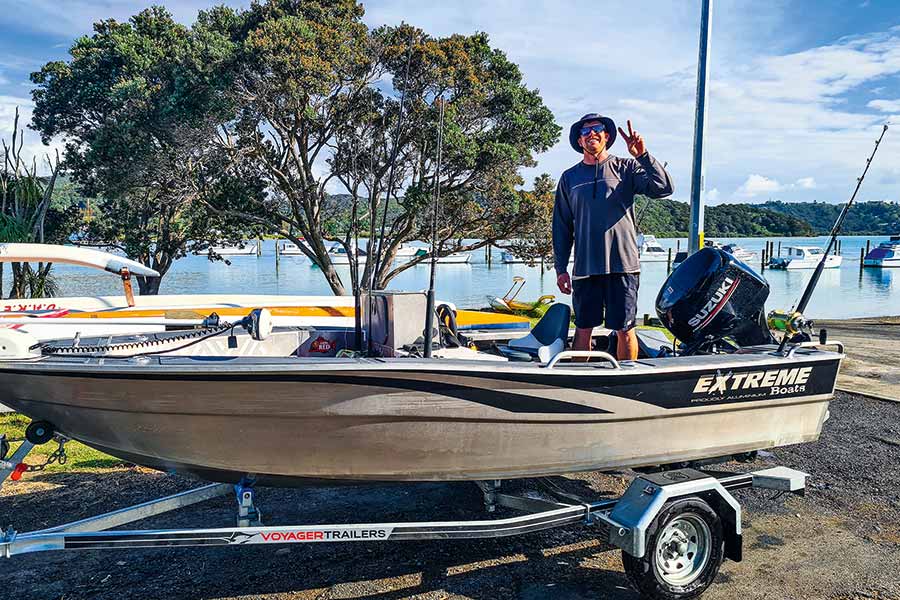 Safely back at the ramp, with two striped marlin to Midnight Snack's credit.

An onlooker ambled over to us as we unloaded the boat, asking how we’d gone.

“Oh, just the two marlin today moite,” was met with a look of complete cynicism, until we showed him the highlights package.

Disbelief turned to interest – “I’ve actually got a 6m Haines Hunter… where did you guys go?” After a quick chat we set-off back to Auckland, happy in the knowledge we’d sent this stranger in the wrong direction. in Yak Yak Yak sponsored by Viking Kayaks
1 hour ago