Mado can be seen year-round within their New Zealand range, however juveniles are most often observed in late summer.

As well as northern New Zealand, mado are found in the Kermadecs Islands, Norfolk Island, Lord Howe Island and sometimes New South Wales, Australia. The presence of mado in Australia is often overlooked however, as it co-occurs with the similar looking Australian mado.

Within their native range, our mado inhabit rocky reefs on pinnacles, headlands and offshore islands, from the surface down to 60m depth. They often swim above the reef, picking plankton out of the water column or grazing small invertebrates off the reef itself. Juveniles may also act as cleaner fish for larger species and will often be bombarded by demoiselles looking for a spa treatment.

So how do you know if the brightly coloured fish you caught or spotted during your dive is a mado? Firstly, mado have very distinctive horizontal black and yellow bands that extend the entire length of their bodies, hence their common names ‘stripy’ and ‘eastern footballers’. Mado have brightyellow fins, relatively large eyes and a diamond-shaped body. Juveniles have the same colouration as adult fish but are usually more vivid. You are likely to only catch mature fish on baited hooks and this may happen when targeting live baits or schooling species like blue maomao or sweep. All life stages of mado have been recorded in New Zealand. Mature mado are most often seen in pairs or small schools; they are very inquisitive and will often approach divers. Juveniles tend to be more solitary, but they will seek shelter in schools of common planktivorous fishes like blue maomao. 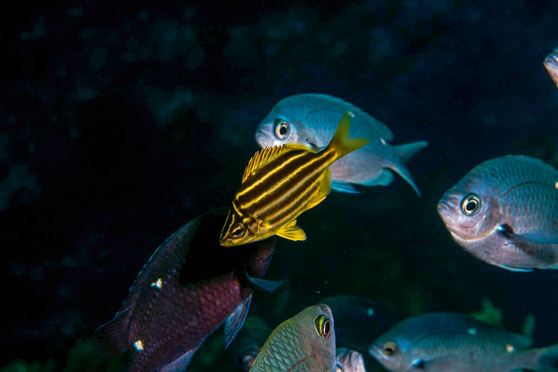 Most mado we see in New Zealand will grow to 20cm in length, but they can grow to a maximum size of 30cm. Juveniles are usually not encountered until they are at least 4cm long. It is not known whether these juveniles are being transported as larvae from more established populations at the Kermadecs or Norfolk Island, or if the adults are breeding here.

Mado are one of the subtropical fishes that is most likely to establish breeding populations in mainland New Zealand as waters warm, so we are particularly interested in observations of spawning behaviour and gravid or ‘ripe’ adult fish. 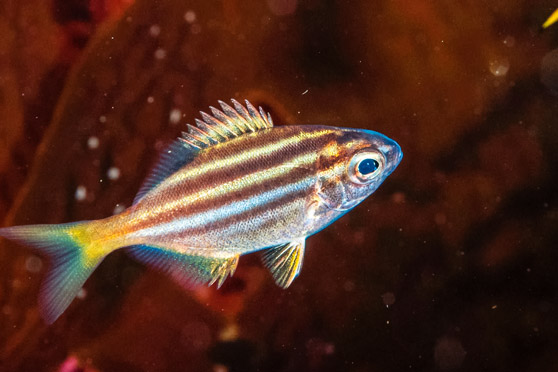 We may see more small, juvenile mado in northern New Zealand and mado occurring further south than East Cape as ocean temperatures increase in New Zealand. If you think you have spotted or caught mado south of East Cape or on the West Coast of New Zealand, send a photograph to WhatsThatFishNZ on Facebook or a fish taxonomist to confirm the identity. We are particularly interested in photos of small juveniles.