Having been lucky enough to spend most of his adult life working in the recreational marine and fishing industry, contributor Alistair Arkell now likes to encourage and promote anything marine and fishing related. He suggests that if you love what you do, it never really feels like work. Another person who exemplifies this way of thinking is Lisa Noble…

It is so refreshing to meet someone like Lisa, and I have no doubt her passion and abilities are inspiring young women to consider recreational and commercial fishing as realistic careers. One thing our industry needs is more women working in it. This will only encourage more women to fish, which in turn puts more money into the industry. It will also mean more couples and families out fishing, diving, waterskiing and enjoying the fabulous marine environment that NZ has to offer. Families that play together, stay together. No pressure Lisa! 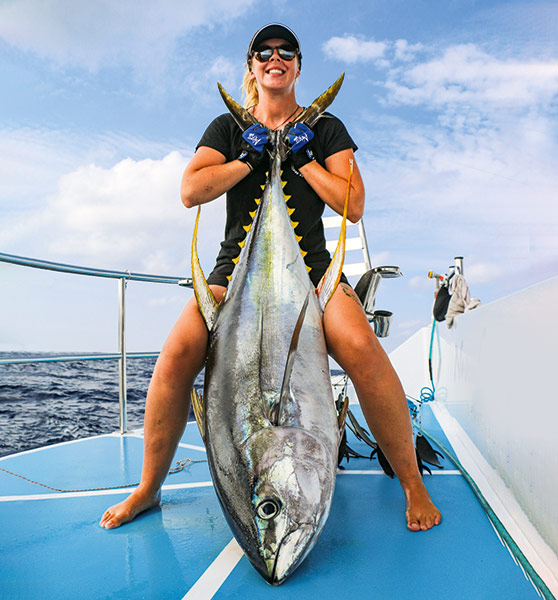 Lisa has made a habit of catching big fish, both in NZ and abroad.

Lisa’s story is relatively unique, and it starts with her growing up in the small rural town of Makara, near Wellington. Her first taste of fishing was catching eels in the local river, but she soon graduated to boat fishing, targeting snapper and kahawai in Wellington. Once old enough, her dad started taking her out on the fabled charter boat Pursuit, and trips to White Island to catch big kingfish were common. The more fishing Lisa did, the more her appetite for it grew – those trips to White Island with Rick Pollock blew her mind and created a fishing itch that would never go away.

Lisa took up hairdressing as a 16-year-old, but fishing was never far from her thoughts. In her early 20’s, she ventured up to the Hutchwilco Boat Show to investigate how she could turn her passion into a job. There she met Nicky Sinden, whose example motivated Lisa to keep pursuing fishing as a career. A chance meeting with Steve Campbell soon after resulted in an invite to Vava’u, Tonga to work for a month. The catch? It was completely unpaid. Still, this was too big of an opportunity to pass up and not long after she was on a plane to Tonga.

The story only gets better from here. Lisa’s very first outing on the boat was a private trip with Steve’s friends Nathan Adams and Adrian Stoakes. The name Nathan Adams won’t be new to game fishermen in NZ. That day, they caught two blue marlin and several wahoo, and because it wasn’t a charter and Lisa had never caught a marlin before, they gave her the honour of winding the fish in. Little did she know at the time, the other two deckhands wanted to leader the fish, which Lisa now knows is the best part!

Steve took Lisa under his wing and having arrived in Tonga not knowing anything about game fishing, she left with a sound knowledge-base of how a game boat operates and more importantly, how to catch marlin.

After stepping off the plane back in windy Wellington and getting back on the tools in the salon, Lisa found part-time weekend work on a Wellington charter boat catching bottom fish in the wild Cook Strait. With sunny, warm Tonga still firmly printed on her brain, Lisa left the salon and moved north to Paihia, where she connected with Bonze of Bonze Lures. She spent three months helping him in the factory making up hook rigs and lures. Living in Paihia, she was ideally placed to pick up work in the tourist season on the busy Bay of Islands charter boats. This mainly involved taking out international visitors and Auckland tourists to target snapper and kingfish – and at times, when the demand was there, marlin. She predominantly worked with Matt Smith on charter boats Anglers Anonymous and Wild Blue, and then, later in the season and the following year, on the beautiful old game boat El Donna.

Living and working in Paihia enabled a chance meeting with Gary and Lori Somers and an invitation to go on a three-month trip to Vanuatu on the vessel November Rain. The highlight would, of course, be a stop at the Wanganella Banks. The trip proved to be a once in a lifetime experience Lisa will never forget with just about every tropical species ticked off. The big blue marlin and yellowfin the region is famous for came out to play.

Before departing Vanuatu via plane after her three-month stint on the boat, Lisa met Russ Housby and his partner Laura Macluas. They live in Havannah, about 30 mins from Port Vila, and operate a charter called Nambas Fishing. Unbeknown to Lisa, she was about to get a turbocharged education on how to catch blue marlin and run a game boat, and I can’t think of a better tutor than Russ. Russ comes from an esteemed game fishing pedigree having worked with his old man running game boats during the glory days of Madeira blue marlin fishing when it was the number one hot spot in the world for big blues. During the seven days that Lisa stayed in Havana with Russ and Laura, she experienced one of the hottest bites in recent times in Vanuatu, catching 16 blue marlin in four day’s fishing, with an average size of 100kg. On their best day’s fishing, they caught seven blues from nine bites! The insane fishing aside, Lisa learnt what sheer professionalism looked like; the ship was immaculate and everything had a place – just how a pro-level game boat should be.

Lisa’s drive to catch fish was not quenched yet, and after hearing stories from Russ about Cairns and the incredible fishing to be had there, she investigated job-opportunities for their black marlin season. The trip never eventuated with her leads falling through at the last minute, but not to be put off, she continued her search for the next cool gig. Her enquiries led her to the famed vessel Gladiator and its skippers/owners Ken and Donna Pascoe. With Gladiator being one of the country’s premier charter boats, they understandably are careful with who they take on board as a deckhand. Donna and Ken were interested in having Lisa come on board for a trial, with the test being a delivery trip from Fiji back to NZ, via Noumea. Sure enough, she passed with flying colours and got the job.

Springtime and early summer mean corporate charters for Gladiator, which runs out of the Viaduct in Auckland. From February onwards, the vessel and Lisa made their way north with six weeks of charters to the Three Kings – a world-famous destination and, before the Wanganellas became known, the most exceptional striped marlin fishery in the world. Of course, Lisa experienced incredible fishing for striped marlin, monster kingfish and big hapuku, but as Lisa mentioned, that is the glory part of fishing the Kings. It’s also a lot of hard work and being a deckhand on a stay-away marlin boat means you are first out of bed to prepare breakfast, and last to bed once the dishes are clean and the boat is tidy. For Lisa, however, the joy of providing that fishing trip of a lifetime and seeing the strengthened friendships that come from spending a week on a boat easily made up for the lost sleep.

By now Lisa had become a very experienced fisherwoman and having met Nicky Sinden a few years back, an invitation came from Nicky to fish the Ahipara Ladies Comp with herself and Helen Horrocks. Ahipara is a tightknit community and its members are some of the best fishermen/women in NZ. Lisa is popular everywhere she goes, her smile, can-do attitude and undeniable passion for fishing making people instantly like her. Ahipara is now where Lisa calls home, and she works with Leighton Matthews on his family cray boat doing the hard yards beach launching out of Shipwreck Bay. Working with the Matthews family has given Lisa a sound appreciation of what good commercial fishing looks like – fishing sustainably for the benefit of our future fish stocks. The best part of the Matthews’ cray operation is that it provides much needed economic activity for a small Northland community, and it also happens to be located in arguably the best coastal marlin fishing grounds in NZ. For Lisa, coming from the small town of Makara, living in the beautiful and rugged Ahipara seems very natural. As the saying goes, you can take the girl out of Makara, but you can’t take the Makara out of the girl. 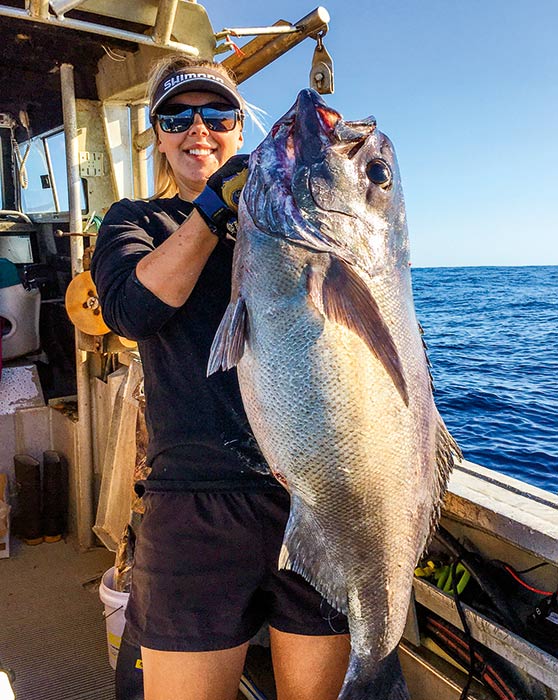 Lisa making this bluenose look like light work. It's just another fish to add to her long list of trophy catches.

Lisa wants to encourage other women to get involved in fishing and even make a career out of it – and I have no doubt her story will do exactly that! 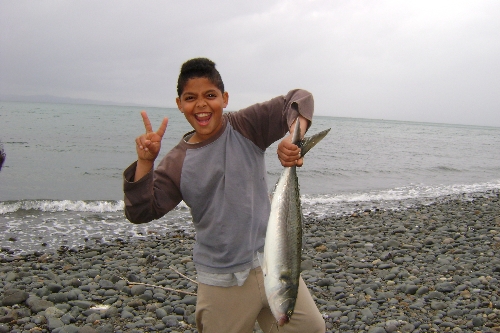 If your kids want to feed them on a reg...
Forum Software Issues

Tiny tach have a good rep. I don't know...
Ramp And Water Access Data Base

Sulphur Beach (Northcote): Does this ...
Caption This

And outside storage cover over outboard...
Who's been saltwater fly fishing? Auckland