Grant Dixon reflects on his experience with kingfish and realises it has been a love/hate relationship. He shares some of his wins and losses while taking on kingfish in his long fishing career.

When I first kicked off this Fishing News gig nearly three decades ago – it doesn’t seem so long if you say it quickly – I was enamoured with yellowtail kingfish. Being much younger and fitter, I was up to the task of going toe-to-toe with these tearaways, fish after fish. I was happy to jig away for them for hours, my work providing me with the opportunity to target them in such exotic locations as the Three Kings, White Island, the Ranfurly Banks and, occasionally, at French Pass at the top of the South.

Speed jigging was the initial go-to method, with 200g Raider jigs being my lure of choice. 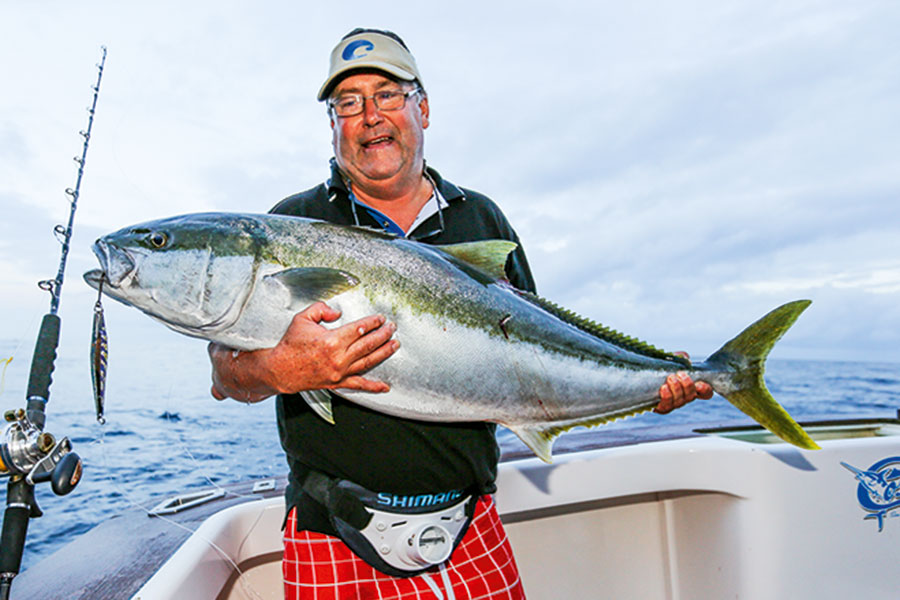 A victim of a 200g Raider, the writer's favourite speed jig. Unfortunately, these lures are no longer available.

While most of my successes came from a boat, my main claim to kingfish fame came during the Ninety Mile Beach Snapper Contest. Too rough to fish the famous surf beach, Wellington landbased guide Pete Lamb, Napier surfcaster Bruce Basher and I headed across-island to Henderson Point, north of Houhora, for a little rock fishing.

Clambering down the hill to the ledge below, we caught and put out this humongous kahawai under a balloon for a kingfish while otherwise occupying ourselves with the local snapper population, catching some nice fish to just under 20lb.

While the others had their hands full landing a snapper, we got a bite on the livebait. Being nearest to the rod, I claimed angling rights.

Seeing the size of the fish put me into a bit of a panic and I didn’t give the kingfish time to eat its XOS dinner, pulling it out of its mouth, the swell washing the bait into the kelp. But then, without a word of a lie, the kahawai slid up the kelp, turned and plunged head down into the waiting mouth of the kingfish.

I took my time and after what seemed like an eternity, I engaged the reel on the Daiwa 900H – a standard bit of landbased game kit in those days – and it was game on. I came up solid on the fish, rolling the circle hook into the corner of its jaw. Some 20 minutes later, without too many dramas, I was holding the fish in my arms – a personal best which has still to be beaten. A photo session followed before the kingfish was slid back into the water after a quick estimate of its length measured against the rod.

It didn’t look like it was going to survive, and I was preparing to dive in and retrieve it until it rolled with a swell and began swimming away. The fish was estimated to be around 40kg and later a chance encounter with George Campbell at Whangarei’s Museum of Fishes resulted in obtaining a facsimile of the trophy fish – my first conservation mount! The fish adorns a wall in our office and has been used in a couple of NZ Boat Show promotions on our stand. 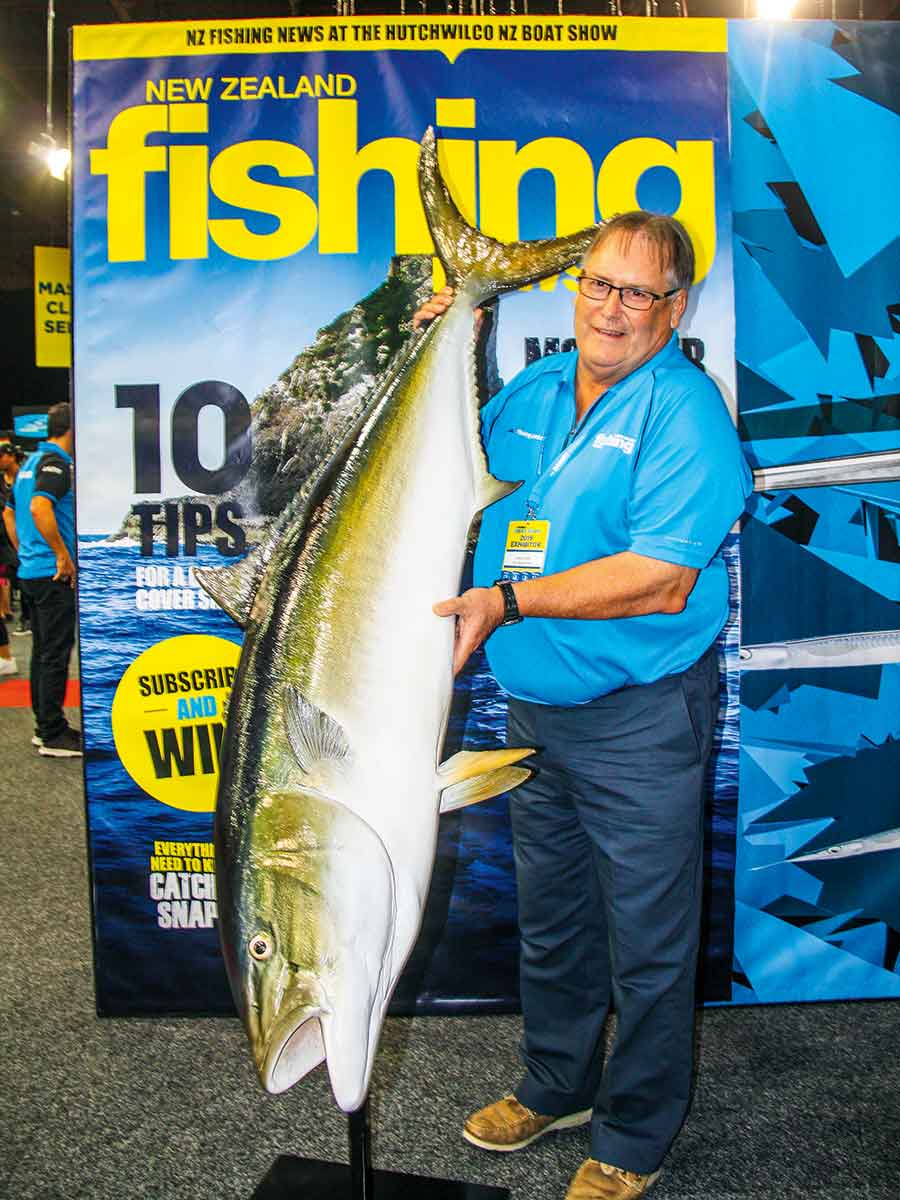 The writer's kingfish claim to fame and his first conservation mount - an estimated 39-40kg fish caught, measured and released while landbased fishing in the Far North.

There have been a couple of other memorable battles. The first was a 19kg fish caught on a Lucanus slow-jig lure during a snapper straylining session in about eight metres of water – go figure that one out – at Spirits Bay aboard Dave Arrell’s charter boat Double Strike. We were anchored at the time getting dinner on when I hooked up on soft-bait gear that included 20lb trace and a Shimano Twin Power 3000 reel. Reluctantly, Dave pulled the pick, and we chased the fish into the dusk, it taking us a couple of kilometres over some very lumpy ground until it was boated an hour or so later. Checking the hook, it had been badly bent, with just the barb holding on.

Another fish was one I didn’t land, losing it after a 90-minute battle at the Princes group of islands at the Three Kings while fishing three-kilo silly string. Luckily for the fish, I was rubbed off at the double, so it had only a short 80lb leader and hook to shed.

I have not targeted kingfish on very light line since, the exception being the Maverix 6kg tournaments hosted for several years by Rex and Lynette Smith where kingfish and snapper were the two target species. What puts me off is the potential to leave a fish dragging a whole heap of line behind them – essentially a death sentence with nothing achieved. I recall interviewing an ultra-light line exponent who ultimately achieved his kingfish goal, but not before he went through three kilometres of mono after being repeatedly busted off – crazy.

The encounters outlined above taught me a great deal of respect, and passion, for these tough scrappers. I regularly come across readers and contributors with similar tales to tell, holding the species in awe while speaking in hushed, reverent tones! Not sure if the grimace is a result of the angler putting the heat on the kingfish, or the fish putting the hurt on an angler in need of a gimbal.

I have not seriously targeted kingfish for several years now. They are caught mainly as a by-catch of lure fishing for snapper out of Bream Bay where at times the ‘rats’ – fish in the 60-80cm bracket – are lurking over my favourite deep-water snapper pins in plague proportions. The first one or two are great fun and I occasionally keep one for the table, but they do take you away from what can sometimes only be a short snapper bite.

I can see one or two readers getting to this point and thinking, “you ungrateful bugger,” and that may be the case, but I have set myself a goal of finding that elusive 30lb trophy snapper and consider these smaller kingfish a distraction from that quest.

Kingfish are a magnificent species in so many ways and we are blessed to have them in good number and size, particularly for those who make targeting them something of an art form – just think of our top charter skippers here. We are also lucky that they are not a major commercial species, more of a bycatch, which is the reason the kingfish fishery is in such good health. I have a huge respect for the species, but I hate what they can do to an angler, leaving them at times broken.

I am heading away with a bunch of mates on an extended top of the north charter trip soon, and yes, I will be lining up along the rail, livebait at the ready in anticipation of a decent kingfish bite – but just one will be enough. It is a young angler’s game. But those big Northland snapper, bring them on – the bigger the better! 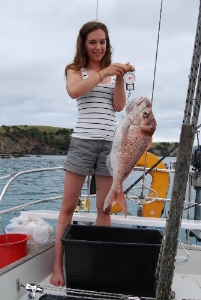