The concept of transporting kayaks to offshore locations using a vessel (mothership) is nothing new to kayak fishing in New Zealand. Rob Fort has participated in many such expeditions over the years and reckons this type of adventure is a must for kayak anglers…

Once at your destination, the mothership (as the name suggests) becomes your base. Another option is to use a bigger craft as transport to an island that has accommodation on land.

During December a weather window looked perfect for a three-day trip to Slipper Island, located along the eastern side of Coromandel Peninsula. The call came from Graham, who runs Kickback Adventures, the operator of kayak fishing mothership trips to the island.

I was joined by kayak fishing enthusiasts Damian and Jeff at Tairua Marina, our departure point. An extensive array of gear was loaded onto Slipper Island Express, a seven-metre Stabicraft which also handled our kayaks. A short trip across soon had us at our island destination. 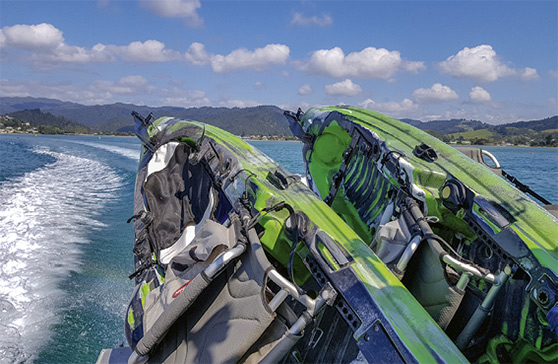 Using another vessel (mothership) to transport the kayaks and gear can be a good option and it sure beats paddling!

Our accommodation was just 50 metres from the beach and after settling in we soon had the kayaks set up and ready for time on the water. With new country to explore, we went to the southern end of the island. Damian and Jeff fished from the kayaks while I got in the water for a free-dive. Water clarity wasn’t as good as expected yet I still enjoyed four hours in the water exploring.

As the day stretched into late afternoon the odd decent snapper started showing up in shallow water. One reef with plenty of swell moving over it held a couple of seven-kilo snapper, which I managed to spook while searching for some crayfish.

With the crayfish proving elusive and the sun going down, I caught up with the others who had found a few fish. Damian and Jeff had caught and released plenty of snapper, along with a couple of rat kingfish. Things were looking promising for the next day.

Back at our base for the evening, we enjoyed a few cold drinks and a three-course meal which Graham had prepared during our absence. The evening was filled with conversation before we hit the pillow around midnight.

Anticipation of adventure soon broke our sleep, and with one eye open, I was met by subdued morning light coming in the window. We hastened to get ready, starting with a coffee while preparing the gear. Much to our delight, some dolphins appeared in the bay and they could be seen from a large window at the lodge. We had no idea what this would bring later in the day.

Heading down to the kayaks on the beach, we found a number of bird work-ups not far away. All of them turned out to be kahawai and the jigs soon went down with Damian connecting to our target species, a yellowtail kingfish. We spent some time working the dense schools with jigs and stickbaits. 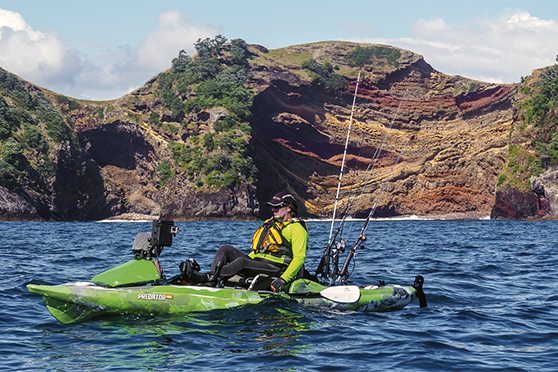 The island provided a stunning backdrop when on the water.

With plenty more jigs dropped but no interest, the time came to return for lunch. Some activity inside the bay back towards the lodge grabbed our attention. It was the same pod of dolphins that had greeted us first thing in the morning. What happened from here on was nothing short of outstanding with all of them jumping clear of the water at different times and swimming around our kayaks. They continued to provide entertainment for hours, even remaining close to the lodge while we took a break for lunch.

Everyone on the island made the most of the dolphins, taking the time to interact with them when they came by. I couldn’t resist a shore dive from the lodge to explore the sea floor and during this time had a visit from the dolphins. It was a magical experience that lasted for some time with them surrounding me on a number of occasions.

The dolphins were clearly in a playful mood and we observed a couple of individuals who were engaged in a game that involved carrying a piece of kelp on the dorsal fin. One even came in and offered some to me, but I was too slow and it was quickly taken up again.

They continued to jump out of the water providing us with memories of a lifetime, but eventually they moved off so that afternoon we enjoyed a trip around the island on one of the all-terrain vehicles. The coastal environment on offer is simply stunning with views that will leave you breathless. The day was finished with a few hours kayak fishing before enjoying more fine food cooked and prepared by Graham.

Next morning we hit the water early in search of kingfish once again. Our efforts were rewarded with a few fish landed and one kept for a feed before it was time for us to head back and load up for the return journey to Tairua. Like so many other trips, this adventure had ended all too soon with lots of unfinished business. We had still managed to catch some good fish despite timing our visit during the least productive part of the year.

New Zealand has a large number of offshore islands on offer but staying on many of them isn’t always possible, with most privately owned or managed by the Department of Conservation (DOC). This means many of them can’t be accessed.

Those that offer camping are often within reach of kayaks but paddling there does limit how long you can stay and the amount of supplies you can carry. This is where operators like Kickback Adventures prove worthwhile by providing a taxi service to your choice of location.

Currently Kickback has three offshore islands that are privately owned with more additions planned. Options allow for kayaking to the island with your equipment transported separately. Mother-shipping the kayak over can be a better option, though, saving time and energy for exploring.

Having all the catering done for you as part of the package is well worth it and leaves you to do whatever you like. Graham, the host and operator of Kickback Adventures, provided us with excellent food and even packed lunches catering to our needs. Nothing was a problem. His slogan, “Just kickback and leave the boring stuff to us!” really does make this trip away even better.

As far as Slipper Island goes, accommodation options range from the lodge to glamping and camping. The island also caters to large groups with a barge able to transport up a dozen kayaks and their gear at a time. There are even plans to include a day trip out to the Aldermen Islands, which is an exciting prospect. 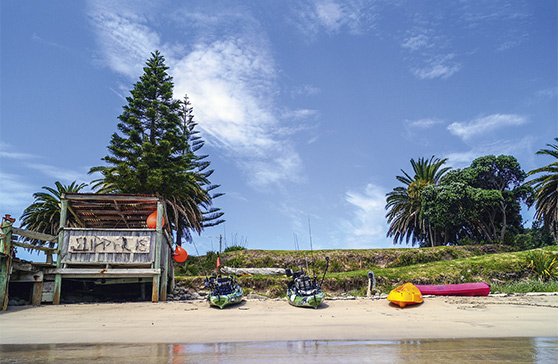 Our kayaks could be left on the beach set-up and ready to go.

There is also potential for this type of fishing adventure to include your partner even if fishing isn’t their thing. With other activities on offer, partners are sure to find things to do while you are out fishing.

Who knows what can happen with this kind of experience? We certainly didn’t expect to have such an amazing encounter with dolphins.

The only way to have a chance encounter with wildlife is to get out in the outdoors. If you’re interested in doing a mothership trip to an offshore island, look up Kickback Adventures. 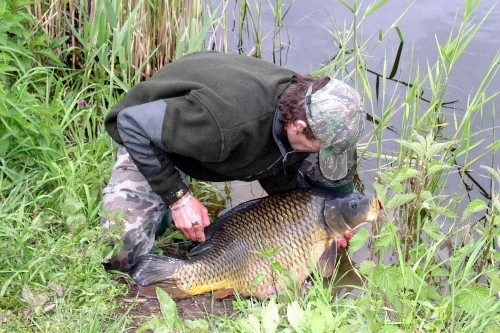