Ethan Neville had a solid summer targeting Hauraki kingfish, but this success was well overdue. He shares what he changed this season to up his catch-rate…

I need to start this article with both a disclaimer and an admission: I’m in no way an expert when it comes to targeting kingfish and I have never landed a kingfish over 1m in the Hauraki Gulf.

If you want to stop reading now, I completely understand.

But what I did do over the 2020/2021 season is consistently land kingfish in the Hauraki. Until last spring/summer, I used to watch videos of charters and more accomplished anglers than myself reeling in kingfish day after day and wonder where the hell they were going and what kind of special techniques they were using. That’s not to say I hadn’t caught my fair share of Hauraki kings, but they mainly came onboard as bycatch on soft-baits and slow-jigs, and even my trips ostensibly dedicated to targeting kings quickly devolved into chasing snapper.

So what changed this season? It’s actually quite simple really: preparation, purpose, location and technique – the basics, in other words.

Before this past season, my average trip in the Hauraki typically started with a short drive to my family home to pick up the fishing gear, followed by another short drive to Hatfields (just up the coast from Orewa, north Auckland) to pick up the boat, and then finally a quick jaunt across the road to launch off Hatfields Beach. By now, the sun was inevitably up, there was a fifty/fifty chance my rods were rigged and the plan to catch livies was usually abandoned. This meant the kingfish rods stayed in the gunnels, and it was off to cast soft-baits around Motuora or Kawau Island. While we’d still usually come home with a feed and perhaps have landed a bigger snapper or two, it was another day with an envy-filled end as I watched Hauraki-caught kingfish roll through my social feeds.

Things changed a bit this season. Not once have I gone for a morning fish without collecting both the gear and boat the night before the trip. Unless I’m heading to Omaha, which has a 24-hour petrol station on the way, I’d also have the boat fuelled and salt ice in the Icey Tek. All of my rods would be rigged the night previous – I even tie on metal jigs and stickbaits for the sake of convenience, even if this means transporting them is slightly more niggly. 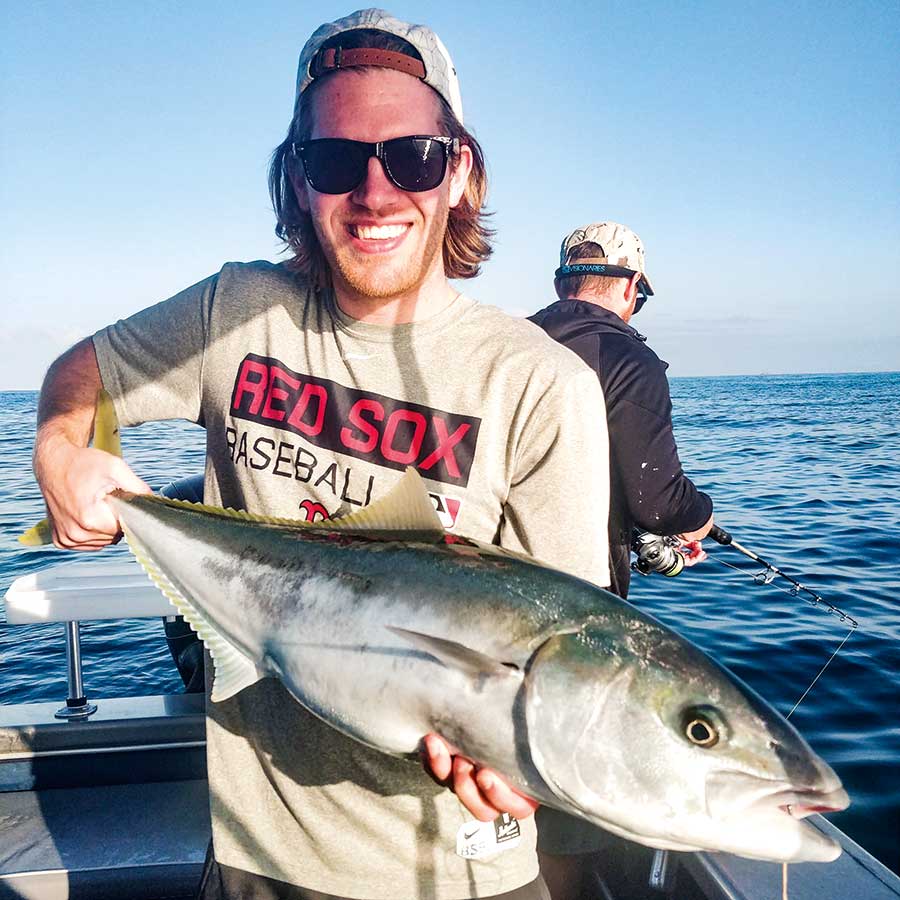 The writer saw a break in the weather and took a crew to Simpsons Rock at first light. Sam Hewat was the first to hook up!

I also stopped making excuses when it came to preparation. When my parents and sister decided they didn’t want to meet me at the ramp at 5am, I launched the boat off the beach by myself with a half-metre swell rolling. By the time I’d retrieved anchor and was cruising to the mouth of the bay, I was soaked from my chest down – but when I picked up my crew at 6am from the beach, the livie tank was full and we could shoot straight to Flat Rock before the sun was hot.

Why has this made such a big difference? Because Hauraki kingfish, particularly in the well-known spots, can be, at least in my experience, a bit more wary than their out of town cousins. When you’re at Anchorite under the heat of the sun with thirty other boats all casting and chatting and motoring around, it’s pretty obvious that the fish won’t be feeding as actively. Motor noise can disrupt bait schools quickly, and bright sun usually sends the kingfish down deeper. When we arrived at 6am at Anchorite in early January, however, it was still and silent. The charters were still an hour away, baitfish were working on the surface, and before the masses showed up, we’d already lost two kingfish and landed another. At 7:30am, the bite went dead and we didn’t see one other boat hook up. I’m sure plenty of people went home that day saying the fishing was dead at Anchorite. It wasn’t – they were just two hours late.

This is a big one. When I target kingies now, I target kingies. This means my soft-baits and slow-jigs are cut off and replaced with sabikis. This means not throwing a slider-type lure down when we come across sign, choosing rather to try land a few jack macks. This means persisting with my livebait rod and jigging setups even though I’ve noted the sound hard on the bottom. And when I do finally give in and drop a lighter lure, this is worked harder and faster than usual to try and attract a kingfish bite – snapper are just a bycatch.

Don’t get me wrong, I still love targeting snapper, but when I’ve decided to head out for the morning to hunt kingfish, that’s where I put all my effort. It’s too easy in the Hauraki to see a bit of snapper sign, drop a slow jig, hook up to a pannie immediately, and then proceed to waste the morning light fiddling around with barely legal snaps.

Over summer, there are endless reefs in the Hauraki Gulf that hold kingfish. There are some better fishermen than me who have seemingly got the whole ‘catching inshore kingfish with stickbaits method’ down-pat. These are the anglers I’m still jealous of. I myself have never had much luck in the shallows with stickbaits, but I know the inner city buoys do well at first light in January and February, as do a lot of the reefs with plenty of current and a bit of bait around.

For the rest of us, however, there are a number of hotspots throughout the Hauraki worth checking out in late spring/summer/early autumn – and I’ll name them because they’re that obvious: Flat Rock, Horn Rock, Five Mile Reef, Shearers Rock, Anchorite, Channel Island, and, if you’re more adventurous, Simpsons Rock, the Mokes and the various pins around the back of Great Barrier. There are also a few more lesser-known reefs around Kawau, Little Barrier, Waiheke and Great Barrier, but I’ll let you and your charts find those ones. 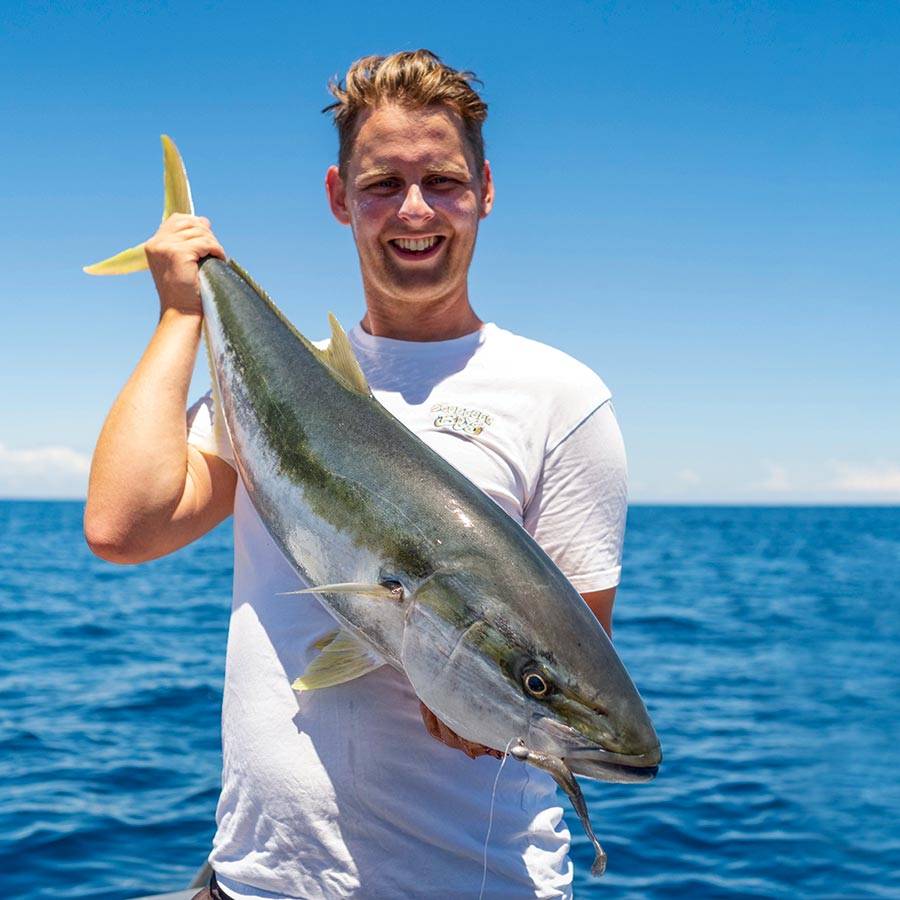 Tim Wood with a Little Barrier king - sometimes soft-baits are the lure of choice for kingfish.

So what changed for me, then, considering I always knew of these locations? This is simple. I just started fishing them regularly. Boat size is a limitation here with some of these spots, but I’ve now taken my six metre Bluefin (a fantastic boat that’s served our family loyally, but it’s certainly not known for its easy riding) all over the inner and outer Hauraki Gulf. If there’s a weather window a bit further north, I hop in the car and drive to Omaha in the dark, and am fishing around Little Barrier at first light. If there’s only a weather window in close, I’m at Shearers Rock or Flat Rock or Kawau for an evening fish. If there’s an absolute stunner of a day ahead, I grab three mates to split the fuel costs with and shoot to the Mokes.

I should note the obvious here: I’m single, childless, 27 and work for a fishing magazine – I know not everyone is so fortunate to call fishing ‘work’ and can’t shoot to the Mokes with one day’s notice, but I’m sure your family brings you more fulfilment than fishing (it does, doesn’t it?).

Getting to these spots is one thing, but fishing them regularly is another. It always take a little while to find your bearings at a new location. Once you’ve fished a spot three, four, five, or sixteen times, then it’s all action as soon as you arrive. You also learn where the bait tends to hold at which times of the day and at which tides, and all of these little pieces of knowledge typically add up to successfully spending time fishing, rather than boating around looking for sign.

The technique section of this article is pretty straightforward: use livebaits. In the north, kingfish still seem to like metal jigs. In the Coromandel, kingfish still seem to like metal jigs. Further south, kingfish still seem to like jigs. In the Hauraki, kingfish under 60cm still seem to think jigs are okay, but even these excitable youths will ignore them sometimes. This isn’t to say we haven’t caught a couple of legal kingfish on jigs this year in the Hauraki, but livebaits are far more consistent. To put it into perspective, I’ll spend anywhere up to two hours trying to get livebaits – even if this means I miss first light at the chosen reef. Why are livebaits so successful compared to jigs? Probably because Hauraki kings have seen a lot of metal and seem to be getting wary of it. Baitfish, however, are their natural food, and not much deceit is required to get a hook-up. While most livebaiting techniques are pretty straightforward, I will note that I have started trolling livebaits more often. This allows us to cover more territory, and prevents us from getting distracted by snapper fishing.

If livebaits aren’t an option – they may have been too tough to find or all your stocks have been eaten – I find the next best thing is trial and error, i.e., throwing every jig and lure you’ve got at the kingfish and seeing what works. If we have three people fishing, I have one person on a lighter slow jig or soft-bait, one person mechanical jigging and one person either horizontal jigging (casting and retrieving a metal jig on a topwater rod) or using a larger slow jig, like a big butterfly jig or a more rounded speed jig. If the sign is high in the water, then a stickbait or popper can also be deployed. It’s been interesting seeing how often standard speed jigs are ignored in favour of soft-baits or slider-style lures. I’m not quite sure why Hauraki kings favour smaller lures, but I’d speculate that this has something to do with their food sources (often anchovies/pilchards rather than big kahawai/trevally). 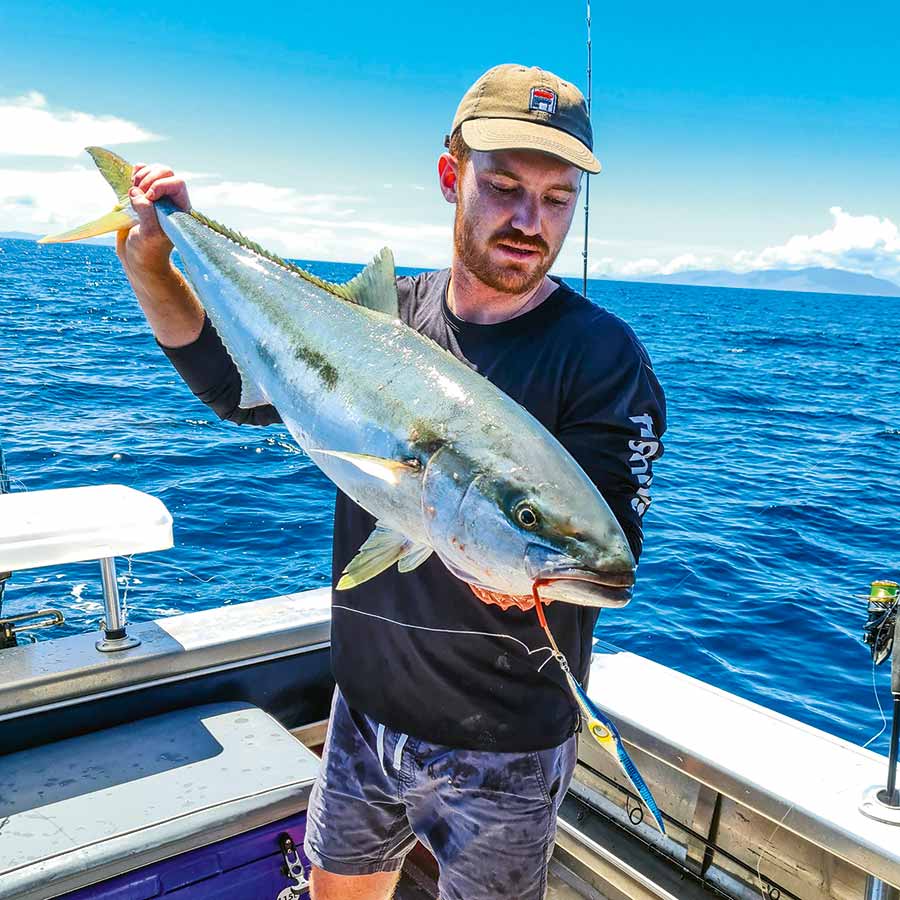 Once the livies ran out, the writer threw down a Glowbite Lightning Rod jig and quickly hooked up.

And those are the things I’ve learnt! You may have noticed that the consistent theme across all of the above is simply putting in more effort – being better prepared and more persistent, getting up earlier, travelling further, and so on. Fishing, it turns out, is like any other sport: the more you train and the more effort you’re willing to put in, the better you’ll get. 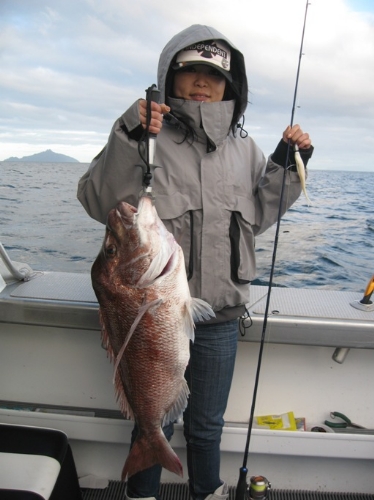