Peter Langlands provides an overview of one of NZ’s best summer destinations: the abundant Golden Bay.

Takaka is the main township in Golden Bay and is well provisioned with a supermarket, some good cafes and a number of accommodation options. The nearby Pohara Beach offers some top seaside accommodation and a decent sized motor camp, which is close to the main port and boat launching facility of Golden Bay at Port Tarakohe. This large sheltered boat harbour allows easy and safe access for trailer boats.

Heading out east from the port around to Abel Tasman Point will provide you with some good reef fishing for patches of tarakihi and gurnard. There are also some large mussels farms on Abel Tasman Point only 10 minutes from Port Tarakohe. Further around the headland towards Separation Point, there is a good spot for a large diversity of pelagic fish and albacore tuna will come in close here from mid-December to early March. Large shoals of mackerel and kahawai, along with a few trevally, congregate off Abel Tasman Point and Separation Point. Look out for flocks of gannets and shearwaters as markers of where the pelagic fish activity is. At times, large pods of common dolphins can also be sighted and will add some drama to the day’s fishing.

The summer fishing season is just about here in the south and from November onwards, the warmer water species come into shallow water. Golden Bay is a top option with kingfish coming into the shallows around early December. This provides a spectacular opportunity for casting at kingfish which feed along rays working in the shallows. Working in and around other anglers on the flats is a good strategy, and often the kingfish will come back into similar areas each day, once you know where the spots are. Getting out early in the day, but once the sun is well above the horizon, is a good strategy. In addition to kingfish, the mussel farms just out from the delta at the mouth of the Collingwood River provide good fishing for snapper, gurnard and kingfish. Patches of foul also allow anglers to catch tarakihi. The mussel farms are quite close inshore along western Golden Bay and are a good option for kayak anglers. 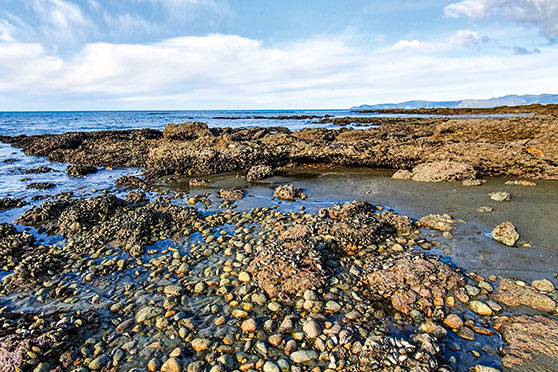 Paton's Rock is a top spot to get a feed of mussels and for shore-based snapper fishing over the summer.

Shoals of kahawai and kingfish also come into the channels draining many of the inlets in Golden Bay as they chase shoals of yellow-eyed mullet and garfish. Many of the inlets and bays also have good populations of flounder, which can be speared at night.

Much of the bay has sandy shores but fishing into deep gutters in the surf at night-time can be a good way to catch larger snapper, although rays will often be caught too. Rig sharks can also be caught by surfcasting. The rocks at the base of the northern side of Farwell Spit provide a top location for shark fishing when the sea conditions are slight.

It is important to note that boating and shoreline activities are prohibited from along the inner section of Farewell Spit as the spit is one of our main wildfire refuges in NZ, supporting tens of thousands of shorebirds. Organised tours along the spit offer a great family activity for seeing a spectacular range of wading and seabirds and is well worth doing, especially if the wind is not too strong.

Golden Bay is one of NZ’s top spots for foraging shellfish, with healthy beds of a wide range of species. The estuaries and inlets, such as Wainui Inlet, have good stocks of cockles, as do the sandflats out from the Collingwood Rivermouth. On the open sandy beaches, tuatuas can be found. Paton Rock is covered in large green-lipped mussels which are good eating, although snorkelling on the smaller rocks along the eastern side of Golden Bay at Tata Beach will allow you to get larger and better-conditioned mussels (but you need snorkelling gear as they lie in deeper water). Tata Beach is a popular spot for launching kayaks and small boats.

In addition to sea fishing, Golden Bay offers some good whitebaiting in November with the Takaka River being a popular option. Launching a dinghy at the main road bridge and motoring down to the rivermouth is the best option as shoreline rivermouth access is tricky. The mouth of the Aorere River enters out into a large delta into the Bay at Collingwood, offering numerous opportunities for whitebaiting in side channels in among the reeds and can produce some very good whitebaiting catches in November. The Aorere River has a large catchment stretching some 60 kilometres back into the Alps and is one of the most striking features of the bay.

The entire Aorere River offers good trout fishing, although the mid and upper reaches provide the best angling for larger fish. Some decent brown trout are taken and will readily rise for dry flies over the summer months. Don’t expect large numbers of fish but do expect quality fish. The Takaka River is also a top option throughout is entire length and in November, some large and well fed browns cruise the river’s lower reaches bulked up on whitebait. The Cobb Reservoir offers the chance to lake fish for both brown and rainbow trout and provides a scenic drive into one of the higher altitude parts of the bay. The Aorere River is the largest in Golden Bay and offers great trout fishing.

Overall, Golden Bay offers outstanding summer fishing for small to medium boat anglers with a good mix of the core bottom species (such as gurnard, tarakihi and in recent years, an increasing number of good-sized schooling snapper). If the wind is up, you can get a good feed of mussels or cockles and there are also some large Pacific oysters on the rocks around the port and around the estuaries. Having a specialised oyster knife is a major advantage. The bay also offers kayak anglers a lot of options for exploring inshore. A setline placed out just off the beach can be a good way to catch snapper (but it is worth noting that set-netting is now banned in the bay).

With lots of native forest, sheltered walks and some very nice cafes, Golden Bay offers a real ‘get away from it all’ fishing escape for Mainlanders. 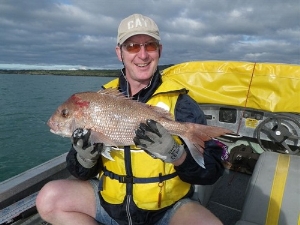 Cat that got the cream! - Hauraki Gulf