Jigging is an effective way to catch big trout, but the retrieval motion, or cadence, is something that takes time to perfect. Greg Morton runs us through how he makes his jigs irresistible to trout.

Winter can be a cold but rewarding time of the year to target trout. Down my way in Otago, south of the canals, the waterways still open tend to be lakes and large rivers and the main fish species is spawning rainbow trout. At this time of year, you will generally be fishing deep water, and so your lure will need to be near the bottom to elicit a strike. It’s at this time that I put away my spinners and primarily use soft-plastics, snap jigs and marabou jigs. The trout that live deep and want food to come to them are often the bigger fish, which provides an extra incentive to use jigs during winter. The single, upward hook also means less chance of getting snagged, letting you fish more sketchy waters.

Like all lures, these offerings come with their own action, but you the angler will have to provide the retrieve rhythm. The word often used by professional anglers in the United States is ‘cadence’.

The fishing definition for cadence is ‘a strong, regular, repeated pattern of movement’. In other words, you have to make the plastic or bait come to life, look like a distressed creature and encourage the trout to eat or destroy it. Terms like ‘twitching’ and ‘popping’ are a part of cadence, as are ‘retrieve speed’ and ‘rod flicks’. Those who figure out what cadence the trout like on a regular basis have found the Holy Grail of jigging.

Why is cadence important?

Simple – because trout are reactive predators. The right bait rhythm turns on the attack switch. Watch a few anglers using the same gear, same lure, same colour and same leader, and it soon becomes apparent one or two are ‘luckier’ than the others, even though they are all standing side by side. It has been said that cadence is the dance of the lure, and you are the band leader. Successful anglers know how to work the lure to the right tune.

The lockdown period saw lots of us housebound anglers watching fishing videos online and reading fishing magazines and books. Fishing is a lifelong subject, so like many, I am still trying to learn something new. What is particularly interesting about watching videos online is that the featured host or hostess usually has a head camera on and you get a privileged look from above at how the successful soft-plastic or marabou jig angler works their lure – their cadence method, so to speak. Personally, I drift off when the fish is being fought for ten minutes or more but watch intently when they exhibit how they got it to strike.

I noticed that a lot of the successful anglers had different cadence methods when using different types of plastics and jigs. Your lure should swim like what it represents. Anglers retrieving paddle tails, for instance, generally relied on the constant twitch to imitate a fish, while curly tails and feather jigs were popped more so they look like aquatic bugs. I should stress there is no right way. The fish are the jury, and each day can result in a different verdict. 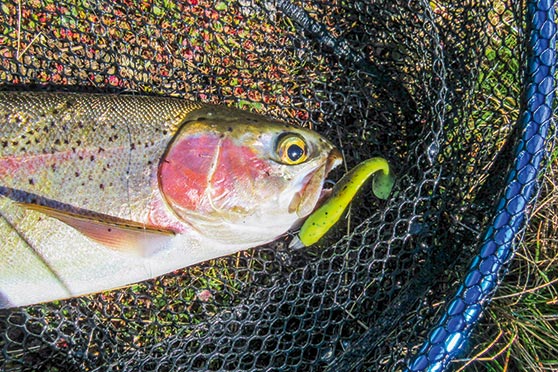 Recently, I took some marabou jigs with me to the upper Clutha River in the stretch above Lake Dunstan. There is fast water here but every now and again on a corner we found a half backwater or quieter pool.

Marabou jigs are made of dyed feathers, usually turkey down, and the feature that makes them unique is that the jig undulates or breathes even when stationary. Move the jig and it comes alive even more. Many anglers assume marabou jigs represent small fish but marabou anglers are better off using cadence methods that imitate large aquatic insects. In short, fish them up and down more than side to side. Trout instinctively react to the up and down motion. 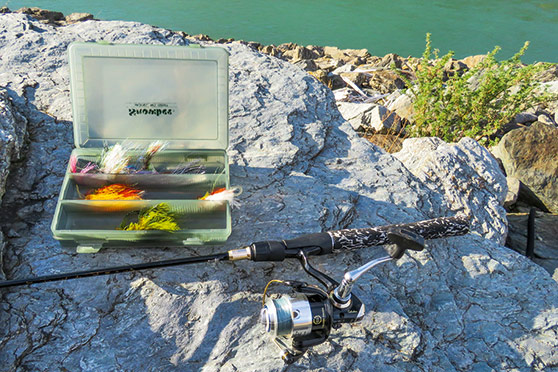 The gear the writer uses when Marabou jigging.

At present, my cadence marabou jig method is to cast the jig, let it drop to the bottom with a lowered rod and then begin moving it: sharp pop, drop to bottom, wind up slack, sharp pop, wind up slack, and repeat back to me for another cast. Mending the line and pointing straight at the lure on retrieve are also important, as is using an ultra-light longish rod, a small reel and light braid or quality mono line. Because the pop is quite abrupt, I often use mono because it stretches and doesn’t rip the hook out.

Fish nearly always take the lure as it drops, so, in effect, I hook them when I do my next abrupt pop upwards. You don’t feel the strike, just come up tight when you pop the rod hard.

On my trip, there was a chance of a trophy rainbow, so I was using green braid. Using the retrieve system I mentioned above, I worked each fishable spot as I headed upriver. Jigging is not as hard on the body as spinning as you are using your wrist a lot more than your arm and small jigs retrieve easily. Black, olive green, brown and white are good silhouette jigs and have produced the goods for me many times.

I was fishing with a black marabou jig when I was finally whacked. It was a typical take. Unlike previous pops, this one came up hard and a feisty rainbow reacted angrily. Usually the hook is snagged in the top of the mouth so the fish can fight virtually unimpaired. That happened here and the result was searing runs, jumps and head shakes, but luckily the knots all held and I landed him successfully. He was a perfect eating size so I kept him. Later in the day the same thing happened again, and I also kept this rainbow for food. I like it when a plan works. For anglers, school is never out. 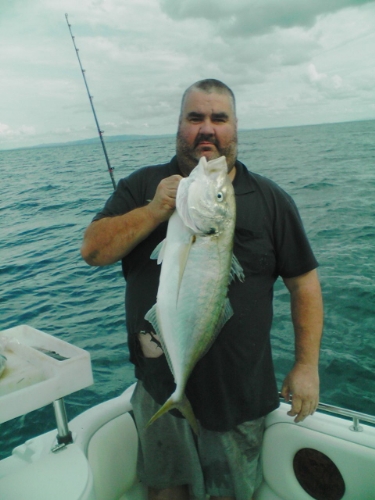