Soft-baits come in a wide variety of different shapes, colours and sizes. While nearly all will work, identifying which attributes will work best in a particular situation can make a huge difference to the final results. In part one of this series, writer Mark Kitteridge discusses how the myriad shapes of soft-plastics can be used to better attract and encourage fish into biting, starting with that perennial favourite, the jerk bait...

I was more than a little apprehensive. On the previous trip, 14-year-old Far North youngster William Lomas had famously beaten me in a one-on-one soft-baiting challenge which had been broadcast live to thousands of Facebook followers. He’d done it on a reasonably tough day by picking the perfect combination of soft-bait shape and lead-head weight – in this case a 7” JerkshadZ attached to a 1/4oz Lightbulb jig-head.

The waiting fish – a mixture of good snapper and kingfish – were loving his soft-bait’s super-slow descent in 15 metres of water, which was accompanied by the very sporadic, jerky movements he provided throughout.

By the session’s end William had not only caught more fish than me, he’d caught the biggest overall, too. It was a humbling moment.

Fast forward five weeks and we were back up in the Far North, providing me with the opportunity for redemption.

However, having just beaten his dad 10-1 on their boat before stepping onto ours, it really sounded as if William had the current fishing situation wired. I was therefore very interested to see what he was using this time around – without him catching me!

I got my chance while waiting for the challenge to start, slyly looking out the corner of my eyes as William idly lifted and dropped his offering. It had drastically changed: instead of the very light jig-head and jerk-bait lure, he’d tied on a one-ounce jig-head armed with a 5” paddle-tail bait. It looked good, the tail flashing and thrashing enticingly. A wave of dread washed over me; had I got it wrong again?

As it turned out, we both did okay – him with the lift-and-drop method hard on the bottom, and me making the most of the long hang-time provided by my relatively light 3/8oz jig-head and 7” JerkshadZ soft-bait, which I twitched occasionally as it wafted down in 20 metres of water.

Fortunately for me, my strategies (and luck?) proved slightly more productive over the allotted time, but William certainly kept me honest and on edge throughout – we’d both come up with very different tackle choices that worked well with the techniques used.

The point of this preamble is to emphasise how important it is to work out which combinations of specific tackle and techniques will likely press the buttons of the fish you’re targeting, and get them biting under the existing circumstances. So let’s look more closely at the various soft-bait shapes (and sizes) and discuss why certain combinations can work better than others. 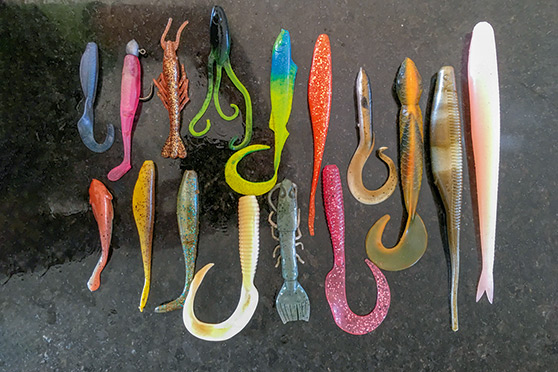 The selection of soft-baits available is mind-boggling - now choose a suitable candidate for the existing conditions!

Jerk-type soft-baits are the most popular design available and that’s not surprising. Essentially they are slim, elongated fish forms, and this shape enables them to cast and sink well, as well as move through the water with minimal effort. Fortunately, these attributes are enough to make jerk-baits work incredibly well.

An effective attractant, shallow or deep

Much of the jerk-bait’s movement is created by the angler rather than its inherent design, although those brands possessing good flexibility can impart a very enticing tail waggle when moving, especially if the lead-head’s hook is short-shanked and/or the soft-bait is reasonably long, enabling greater freedom of movement.

It is the jerk-bait’s slim, tapered form that’s key here though, helping them to sink quickly when attached to heavier lead-heads, then dart and weave at the desired depth when manipulated with rod and reel afterwards.

Or, if the lead-head is very light, the jerk-bait can be allowed to waft down, perhaps just the tip of the tail providing slight but tantalising movements as it falls, until brought to momentary but dying life by the angler’s sporadic jiggles and jerks, simulating a baitfish in its last death throes.

As already mentioned, jerk-baits cast well, but some cast better than others. For example, 7” models cast especially well due to their streamlined form being aided by the extra weight. I also like how their larger physical presence makes them more noticeable during the descent, and if they happen to be Z-Mans, which are inherently buoyant, the descent is also slightly slowed, making them even more likely to be spotted before reaching the bottom. However, should that aspect of the technique prove unproductive before touching down, they lift tail-first and ‘wave’, acting like a feeding baitfish, which again makes them more visible to nearby predators.

If you’re looking to get down to the bottom quickly, much denser product, such as Gulp! soft-baits, will descend more quickly with less jig-head weight, which can be useful at times, especially when kahawai, rat kings and barracouta are around. 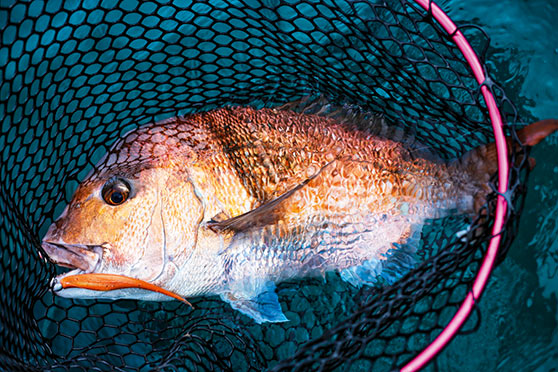 A large jerk-bait placed on a very light- jig-head can be a lethal combination in the right situation.

I also like how larger fish, on average, will be attracted to these bigger offerings, so if you like the idea of tangling with heftier predators, 7” baits will often make this happen. Similarly though, many lure fishers are reluctant to use these big jerk-baits, believing the smaller (but still legal) fish will be intimidated by the lure’s bulk. But think about it in practical terms: typical whole pilchard baits are around a third larger in size, yet they still get eaten by all sizes of fish; juvenile snapper, in particular, are surprisingly savage.

I therefore find 7” jerk-baits generally do the job for me, attracting many of the larger fish in the area – which I enjoy catching and releasing – whilst also accounting for plenty of smaller specimens for the dinner table.

As for the more popular 5” jerk-baits, they still cast pretty well, and their smaller size can appeal to a wider range of fish species and sizes – a big plus when out to catch a tasty feed for family and friends, or you want your rod bending on a more regular basis.

I generally use this size jerk-bait when fishing inshore waters, especially those that are fished hard and unlikely to produce larger-sized fish.

For similar reasons, I enjoy using 4” jerk-baits in such locations, too. However, these jerk-baits have a tendency to helicopter around more than the longer softies when cast. This is a big disadvantage, slowing and shortening your casts and badly twisting the line over time. While this aspect can be reduced by using a heavier jig-head (i.e. 1oz), you will be at a significant disadvantage if the fish are biting on the drop in shallow water. This combination does, however, suit being bounced along behind a drifting boat, especially if added angler movement is kept minimal and subtle, and is accompanied by occasional drop-backs and short, slow retrievals to provide added interest. 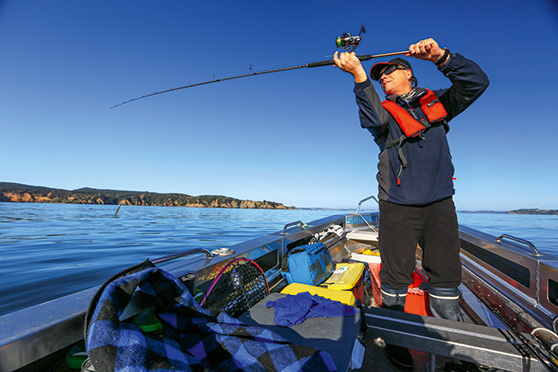 The slim shape of the jerk-bait tends itself well to long casts, but the 4" models can 'helicopter'. 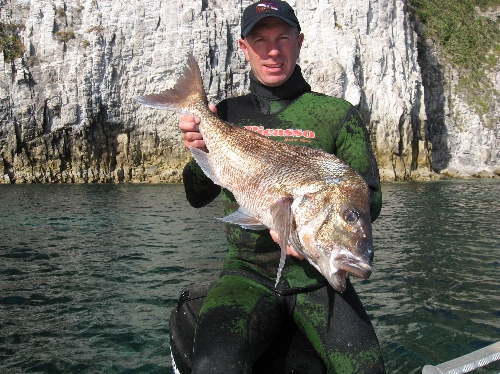