The weather down Greg Morton’s way in Otago has been particularly fickle this past summer. Calm days were few and far between with strong late morning and afternoon winds being the norm. Evening barbeques were rare and boating expeditions often cancelled.

It was hard to get a break, but finally towards summer’s end my mate Geoff rang and said, “I see a one-day fishing window; let’s go up the Manorburn and take my Stabi.” Sounded good to me.

The Upper Manorburn is a popular high altitude irrigation dam inland from Omakau consisting of two basins inhabited by plentiful medium sized rainbow trout. It is also very exposed so boaties like a favourable weather forecast when dragging their boat up the marginal road to fish. It is not uncommon up there to experience extreme sunburn, wind burn and hypothermia all in the same day. It is also not uncommon to experience great fishing.

Longer in the tooth anglers all have fishing spots that they fished with fathers, family and friends over many decades. The Manorburn is one such place for Geoff and me. We know every bay there, know the best spots to target fish, use gear that has previously done the business and have a ton of stories about things that happened up there in the past. We also have memories of late fishing buddies who loved being there. It is a special place, and because access is tricky, it is not uncommon to be the only anglers fishing there on some trips. The fish caught tend to be very uniform in size and condition each season, so visiting anglers hope that on their trip the fish encountered are at the upper limit for Manorburn. The largest I ever saw caught was a 2.25kg spawned out jack. 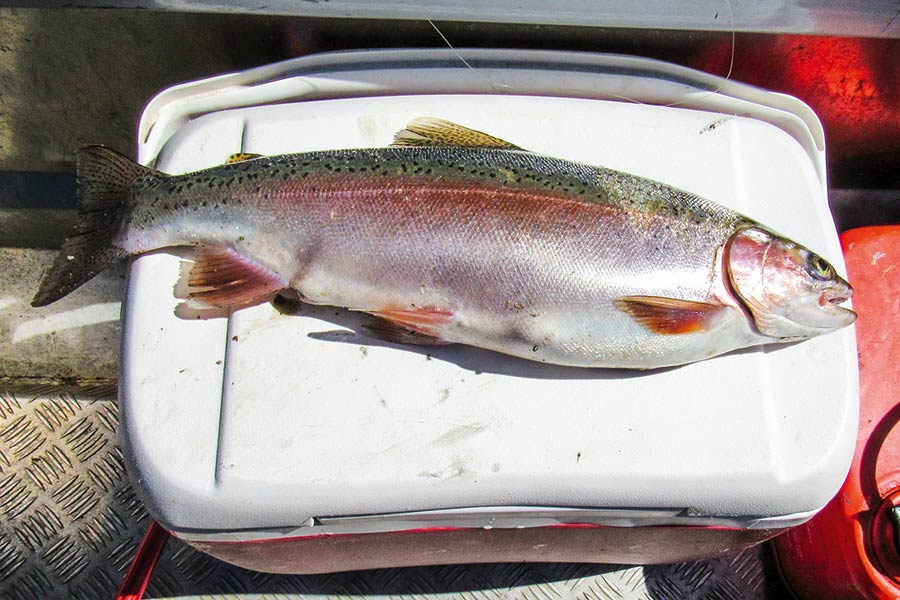 Typical of what you can expect on the Manorburn - a well-conditioned hen.

All fishing methods work up at the Manorburn but some are more physical than others. Worm fishing, trolling and harling is at the passive end of techniques while shoreline fly-fishing and spin fishing are at the more active end of the spectrum.

We tend to fish the top basin most because it is quite shallow, has several in-flowing tributaries and the larger fish also seem to hang out there.

On arrival, we found the weather forecast spot on, so eagerly launched the boat. The boat unfortunately was out of sync with our plans and the battery just wouldn’t oblige. A change of battery made all the difference and we roared off to our fishing spot. An hour later we were finally fishing, and the technique of choice was trolling.

In the early days of our Manorburn fishing, the boat was used just as a transport vehicle, but over the years trolling has saved our bacon on many occasions when traditional shoreline tactics just didn’t fire. Geoff and I have got better at trolling on the Manorburn as well and have a few lures we use now that just consistently fire. We trust them to the point that if they don’t catch fish then we know the fish don’t want to be caught on anything.

The forecast had proved to be almost too correct as the light breeze was almost non-existent, there were no clouds and the sun beamed down out of a blue sky. The odd rise indicated trout but surface action was very sporadic. Whenever we strayed into areas less than two metres, our lures dragged weed so we were very reliant on watching the depth finder as we puttered along. It took time to find clean water. I was using a light weight lead line with 12lb leader while Geoff had a heavier lead line and heavier leader. His rod broke the deadlock first and bent over to a good strike. This event is what trolling anglers wait for keenly – bowed rod, screaming reel and in the case of rainbows, a jumping fish out the back. The successful angler fights the fish while the shotgun partner eases off the throttle, engages neutral, winds in the other rod and waits with the net.

It turned out to be a very good fish for this location and we were both pleased when the net lifted it into the boat. After a quick pic, it was popped into the chilly bin with the frozen water bottles. We sorted ourselves out and resumed our beat down the dam. Ten minutes later my lure was whacked hard and the energetic hen was also a bigger than normal Manorburn rainbow – a bit shorter than Geoff’s but heavier because of its condition. It too joined the frozen water bottles. 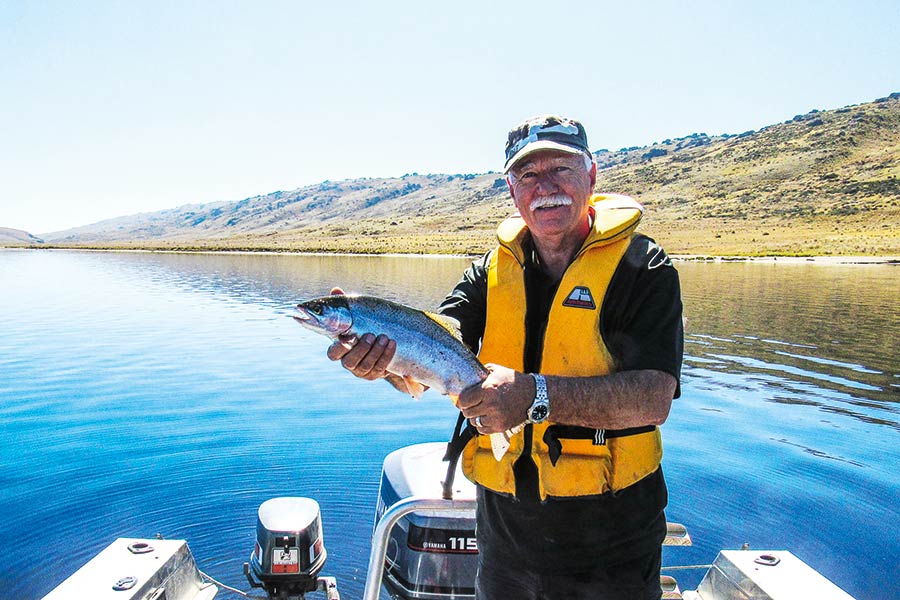 The writer with a prime Manorburn trout, one of two kept on the day.

One hour’s fishing and we had two great fish on ice. It was already a top day but we anticipated it would get better as more similar sized fish came on board. Never assume was the message we learnt for the rest of the day. Geoff lost another big fish, I lost two big ones as well and the next four I did land were small and quickly released. The sun was now vicious so Geoff dragged out a sun umbrella and we huddled under it as we trolled.

In hindsight, we were probably a couple of hours late for the best fishing. The tired battery and weed infestation were the main culprits at the start of the day. We had struck the tail end of the best feeding action and as the day got hotter, only a few small fish were still active. Neither of us were complaining, however, as it had been a great day in magic weather, and the two fish on ice were quality eating trout.

There are no guarantees in these remote places that you will catch fish but all of us who visit Manorburn regularly have experienced stunning fishing when the stars align. 20lber for the fish Babe - BOI

With  what's going on around us no...
Covid 19 - fishing & anything related