Badly tearing your scrotum is not something many people would describe as an epiphany or life-changing moment, but for ITM Hook Me Up’s presenter and producer Matt Watson, it proved to be just that. Grant Dixon tells the story…

To fully appreciate Matt Watson’s story we need to go back several generations, when Matt was not even a twinkle in his father’s eye, to understand the effects genetics had on his development when he finally arrived on the planet.

His daughter Hannah, researching the family’s history for a school project, discovered a headline from a 1880s Edinburgh newspaper: “Scotland Loses Greatest Angler to NZ”. It was referring to Matt’s great, great grandfather who was a triple Scottish fly-fishing champ and emigrated to New Zealand.

“And all along, I thought it was the influence of the commercial fishers on my mother’s, rather than my dad’s side, that gave me my fishing genes,” Matt says.

Over a century later and young Matt Watson was brought up in a commercial fishing environment in South Auckland, his uncles being prominent fishers on the Manukau and the West Coast, which was to become his early stomping ground.

“All I ever wanted to be was a commercial fisherman and spent as much time with my uncles as possible working their nets. And when I wasn’t with them, I was fishing somewhere, somehow by myself,” Matt says.

The die had been cast, so Matt thought, but fate had another twist in store for the budding commercial fisherman.

He had always done well at school, and his mum was hopeful he would break the mould and be the first family member to go to university and obtain a professional qualification.

A family Christmas function put paid to that. Matt had fobbed his mum off by saying he would be taking a ‘gap’ year away from studying and had secretly arranged to work for his uncle.

Family gatherings were always boisterous, competitive affairs and the 1992 Christmas Day celebrations were no different.

The family were divided into ‘lefties and righties’, and after a round of touch rugby and volleyball saw the honours divided, the decider was an innings each of backyard cricket.

It came down to the last ball, the uncle who Matt had agreed to work for on his fishing boats was facing a ‘fiery’ young Matt, needing three runs for victory. Matt knew his uncle was susceptible to a yorker but what resulted was not a tight toe-pincher, but a full-on body-liner that cracked his about-to-be-new-boss on the nut.

The angry batsman stalked his protagonist down the pitch and took a swing at him with the willow. It was all on for a while in a punch-up with the leftie and righty alliances being lost to smaller family clan factions. Once peace was restored, Matt knew his commercial fishing career was in ruins. “Shit, I will have to go to uni after-all” was his immediate thought.

His aunt’s partner came to the rescue and offered Matt a job, which turned out to be laying concrete roof tiles.

He quickly learned the trade and after 18 months branched out on his own, aged 19. Struggling for work at first, he was eventually recognised as a top-rate tradesman and soon had as many as 10 staff working for him, having won contracts with Monier to roof Fletcher and Golden homes throughout southern and eastern Auckland.

By 23, his home was mortgage-free, but he had always hoped to earn enough to buy a game boat and base himself out of the Bay of Islands, taking people marlin fishing. He knew the only way to do this was to work all the hours God gave him, which he did with the support of his then girlfriend and now wife, Kaylene.

While he was atop his lofty perch day in and day out, his thoughts were never very far away from fishing.

Great Barrier had been one of his favourite haunts. On a Friday afternoon, Matt and a mate would drop off the tile elevator and hitch up the boat and head north to either Leigh or Sandspit, stopping to fuel up at the servo and buy all their steak and cheese pies and a loaf of bread, their main sustenance on board, along with Lion Red!

You hear through social media the words ‘doing the hard yards’ in reference to fishing trips. Matt and his mates did just that.

They navigated to Great Barrier in the dark via Little Barrier, guided on the last stretch by the light on Wellington Point.

On arrival, they would sleep in the cockpit under a tarp until first light when they would catch jack mackerel which were kept alive in a fish bin in the outboard well, with a jury-rigged pump circulating the water.

Their playground was anywhere from Miners Head round to Arid Island via the Needles, with snapper and kingfish the main target species.

The occasional highlight was a hot steak or fish meal at the Fitzroy Club which was occasionally open on a Saturday.

One trip, in their haste for a hot meal, they didn’t leave enough rope to account for the ebbing tide and returned to their boat to find it suspended from the Fitzroy Wharf several metres above the water.

Without thinking, his mate cut the stern rope, dropping the motor and the stern into the water, with the bow still held tight and the hull now on a 45-degree angle.

It was a scramble to save all their gear, which was in danger of ending up in the tide before they managed to cut the bow rope to even up the deal. Another lesson learned the hard way!

Another time they headed to Little Barrier in the pouring rain and dark, missing their mark, but thought they we still on track to Great Barrier according to their dead-reckoning.

Suddenly the sounder showed the water shallowing up, along with some great fish marks, so, never ones to let an opportunity pass them by, they decided to anchor up and start fishing.

Matt hooked what was then the kingfish of a lifetime, which took them towards what they could make out was breaking water. After a bit of drama, an hour later they managed to wrestle the fish out of the weeds. It went 36.5kg, a PB.

Deciding to stay put, they woke to calm conditions the next morning and discovered they were at Horn Rock – somewhere they had always wanted to fish but could never find, not having GPS at the time! 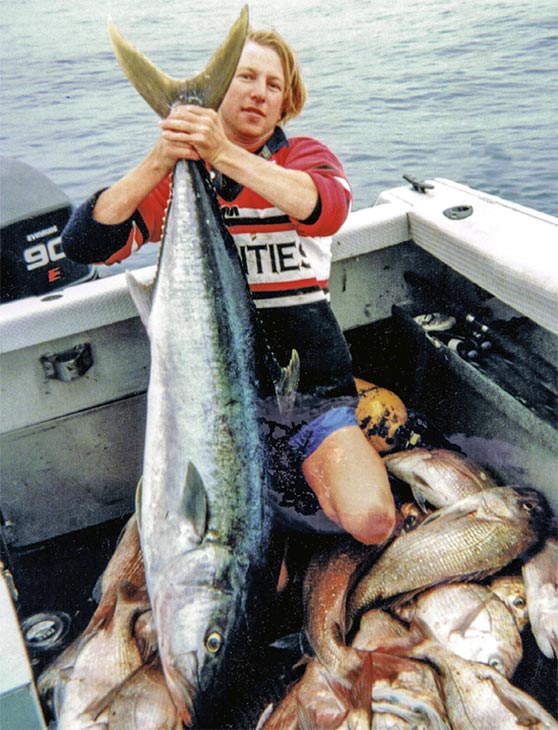 After a rough night out on the boat, the day dawned clear and calm to reveal they'd found Horn Rock.

Getting back to the cut nuts, Matt was working on a Sunday and while high up on a two-storey house was in contact with his mates who were out fishing over the Manukau. They were dealing with a multiple-strike of yellowfin, offering Matt regular progress reports.

With his mind not on the job, he took one backwards step too many and ended up straddling a piece of flashing, which sliced into the region of the family jewels, cutting the scrotum deeply.

It was while he was returning from the A&E feeling a little the worse for wear, he made a life-changing decision. He would have his brother run his business, selling up his home and some investment property and get his skipper’s ticket before moving to Northland.

Bride-to-be Kaylene was fine with this, including his plans to do a short OE to play rugby for an English club, which he did.

“It was at this stage I realised Kaylene was a keeper,” Matt quipped.

He returned home to find the crewman’s job he had arranged before leaving had fallen through. In the end he hooked up with a then-unknown skipper and boat – John Gregory and Primetime – and after a couple of seasons he left to crew on Ultimate Lady, a long-range multi-hull game boat on which he ended up exploring many parts of the Pacific, as well as pioneering the long-range Wanganella Banks fishery. 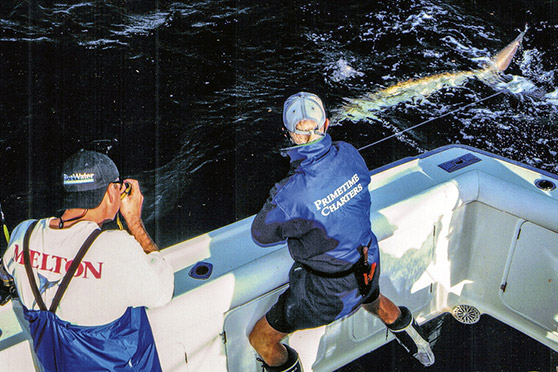 Matt during his days as a crewman on Primetime, dealing with a shark during the pioneering years of the Three Kings broadbill fishery.

On ‘shore leave’ at one point, Matt saw the television show Sports Café on which Marc Ellis challenged viewers to create a fishing video. Shortly afterwards, on two days off between Primetime trips, Matt and a couple of mates, Kerren “Kezza” Packer and Brandan Hull, got together, and with a handy-cam, he had been given as a wedding present, shot what turned out to be the winning video.

During the pre-filming briefing, the boys went over the script until the wee hours of the morning, helped by a few beers, until they realised the opening scene needed all three of them in it. But who would do the camera work?

“We drew straws as to who was going to wake their missus at 4:00am to do the filming and that task fell to Kezza.” The rest is history.

“Many people think I was ‘discovered’ as a result of that video, but my involvement with television shows came some time later,” explained Matt.

With the arrival of daughter Hannah, Matt knew he needed to spend more time with his family…but what to do?

Create a television fishing show was his answer, the Sports Café video having planted the seed, and while the bank wouldn’t fund a production company, there was enough equity in his home for it to offer him an $80,000 loan against it. Once again his nuts were on the line!

The first series of The Fishing Show went to air in 2003 on Sky Sport and Prime.

“TV Three didn’t even reply to our proposal, and the lady I spoke to from TV One said that ‘fishing didn’t belong on television,’ and certainly not a show like our pilot.”

The show was a great success – one that was recognised the following season, with ITM securing the naming rights. This relationship is one that still exists today and is something Matt is particularly proud of. The ITM Fishing Show became an iconic Kiwi show, and Matt became recognised around the world as ‘the extreme fisherman’. But while most only know Matt as a TV personality, he still prefers to think of himself as a fisherman. 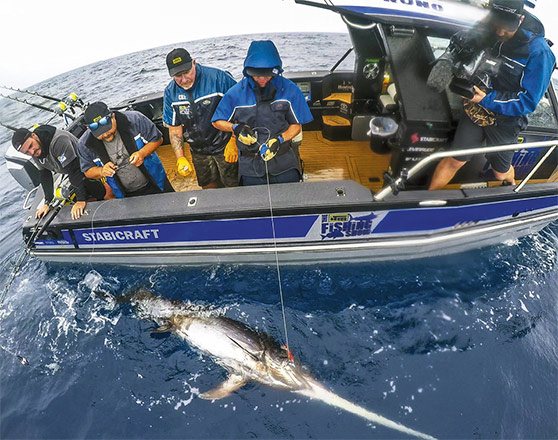 Seventeen years on and Matt is still plying his trade, only now he's got to talk to the camera and direct the crew as well.

The ITM Fishing Show has morphed into ITM Hook Me Up! where Matt puts people onto their own bucket-list fish, but all the key original sponsors are still on board – Hunting and Fishing, Stabicraft, Evinrude, Electronic Navigation Ltd (Furuno), Shimano, Lion Red and NZ Fishing News. In addition, he has since been supported by many others including Toyota.

What started out for Matt as an extremely painful and slightly embarrassing incident has morphed into an iconic part of our recreational fishing heritage, bringing viewing pleasure to many and chronicling our amazing fishery and some of the people who enjoy it.

Kayak fishing in rough weather is a scary proposition for most, but there are ways to mitigate the danger and still catch fish. Rob Fort dis... more >

Hobsonville Marina Ramp is reviewed. With great facilities, easy access and cheap parking, it's a fantastic place to launch the boat.... more > 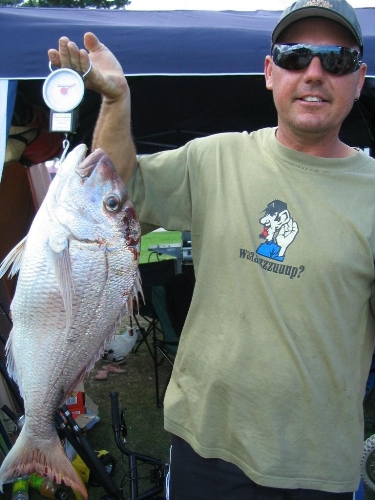