The fishing spot my brother John and I found a couple of weeks ago will forever be called Dead Sheep Bluff because of what we discovered there, writes Greg Morton.

My younger brother had turned up on the doorstep with a new present that he was itching to use in his old haunts of Central Otago. He had bought a 5-weight Sage fly-rod that, in his opinion, cast so easily it was like an extension of his arm.

To test it out properly he wanted to visit somewhere totally new that had a river with steady current as his speciality is nymph fishing. A spot well back in the hills was selected by him and in keeping with the sheep theme, let’s call it Dead Sheep stream. We headed away early the next day under a threatening grey sky.

Exploring new water can be a find or a bust as you can waste a lot of time finding a decent access point and then finding water that suits your chosen method of fishing. A mate John trusted had given him general directions to a fishing spot he had been successful at in the past but like all general directions, it had not included the location where the vehicle should be parked and the best water area.

We eventually found a spot to park but it was ‘in the ballpark’ country, rather than a ‘on the money’ piece of water. Numerous stream crossings later and we had still seen no fish. The current John wanted flowed too fast, and was too deep to be successful. We ploughed on hoping something might change the further upstream we went.

John had his fly-rod while I had brought a spinning rod so that we could access different water as we progressed along. The fast, deep water didn’t really suit either of us so while John put more weight on his double nymph rig, I turned to a weighted 2.5” soft-plastic. Neither produced the goods. 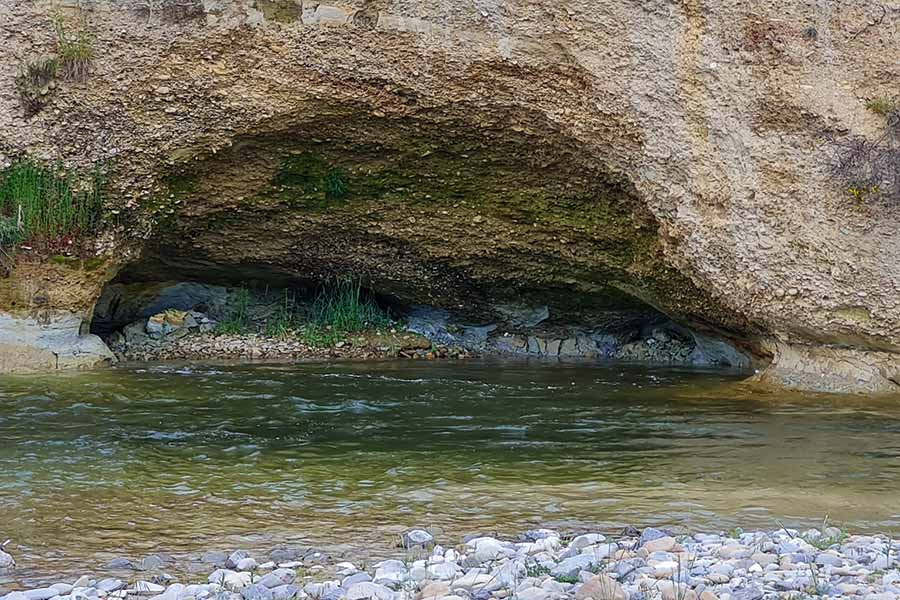 Deep water – a perfect spot for John to give his new rod a good workout.

It’s amazing how far you can walk on a riverbed when you are experiencing no success. You prospect all likely water but those places can be far apart, and we were jumping each other as we travelled along.

Finally, the stream gradient levelled out and for the first time we experienced some fishy looking water. I was fishing at the tail of a pool while John drifted his nymphs through the glide around the corner. I heard the word ‘yep’ called out and saw his flash new rod bent over and him trying to get line back on to the reel. He was hooked up to a big back country brown trout which took him downstream to the head of the pool I was fishing. The fight was dour rather than spirited and I landed it before it got into faster water. He was rapt, and rightly so as it weighed five pound on my old net scales.

Photos were quickly snapped and then John released the jack to grow bigger. It’s amazing how success can raise the spirits, make the feet no longer hurt, and have you eager to walk further. It was the next pool we later named Dead Sheep Bluff. John had waded out a little to get a better angle for his nymphs when some stones from above crashed down into the water in front of him. Looking up he saw some lamb heads gazing down at him from the top of a seventy-metre-high cliff. There was no fence or hot wire keeping stock away from the drop so lambs were playing Russian roulette along the tracks up there. He backed out not wanting to spook them and we headed upstream. Around the corner we found some past casualties and survivors of this death trap. There were two dead sheep, and a couple of sore looking others that had obviously fallen from above. There was nothing we could do but it was upsetting. It seemed a strange place for a farmer to run naive and inquisitive lambs.

We shouldered rods, headed away from the cliffs, and began finding really good water to fish. Even better, we now began seeing the odd big trout gliding away into the depths. I tried a bubble and two nymphs for a while and did have one trout momentarily grab the trailing nymph on a retrieve. The water began to shallow out in the next glide so I returned to a spinner which was suited to this kind of water. Sure enough, there were trout there and I landed three in the next fifteen minutes or so. Sadly, they were all small and feisty rather than denizens of the deep.

It was John who attracted the better fish and soon after I caught up with him, he was hooked up to a strong fighting brown trout hen. It put up a solid fight but the Sage did what it was supposed to do and landed it soon after. It was about three pound on the old scales and in top condition. He had hardly released that one when he was in action again on a slightly smaller one that also put up a good fight. He slid it into the bank and then the hook pulled out. It lay there so John pounced on it but didn’t get a good grip. Like a piece of soap, it slithered through his fingers then rocketed under his body to freedom. He was always going to release it so no harm done. John Morton and his big trout, taken on a 5-weight Sage rod he received as a Christmas present.

In the same pool I saw the fish of the day. It came out of the depths, had a half-hearted swipe at my spinner then disappeared. It was big; well over 3kg and very dark in colour. We headed home after this and made very sure we avoided the cliffs.