It’s generally accepted that fishing in low light yields better results than fishing during the full light of day, and fishing under a blazing sun can be especially challenging. John Eichelsheim looks at the advantages of fishing at dusk.

Low light conditions occur every day at dawn and dusk, regardless of weather conditions. Many fish species feed more readily when light levels are low and some, like snapper, enter very shallow water. That’s why smart anglers target the day’s first or last light to fish harbours, estuaries and beaches. 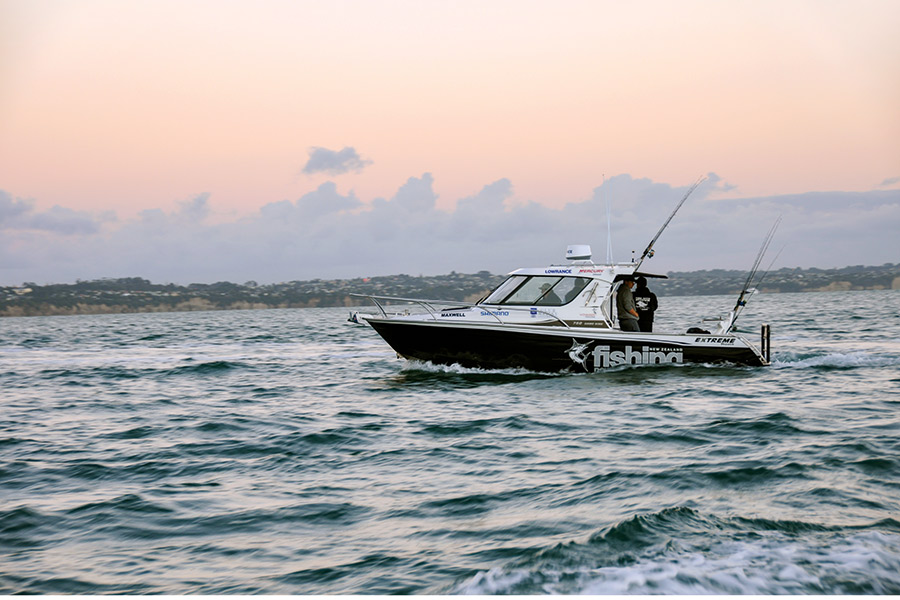 The NZ Fishing News team out of bed early to make the most of the dawn bite.

In periods of low light, predatory fish hunt or ambush prey using the gloom as cover. Many prey species feel less vulnerable to fish-eating birds and terrestrial predators when it’s dark, so they are more active, which attracts bigger fish. In addition, anglers’ terminal tackle is harder to see in low light, so fish are less likely to be suspicious of it.

I’m a regular first light fisher, but my best sessions, certainly when fishing with bait, were always at the other end of the day. In my opinion, fishing at dusk has the advantage over first light because the fishing often gets better as light levels fall, whereas in the early morning the best fishing is often first thing and becomes progressively worse as light levels increase.

Whether you are shore fishing or fishing from a boat, if you are contemplating a dusk adventure, it pays to set up early.

Rock fishers should get themselves positioned and set up in daylight, so they can familiarise themselves with the water they will be fishing, distribute any ground bait and position the berley.

It pays to select a fishing posse in advance and then thoroughly scout the route. You’ll likely be returning in the dark, so for safety’s sake you should be thoroughly familiar with the way back. Carrying a decent light source goes without saying.

Check the tides. Will the possie you’ve chosen be safe during the hours you plan to fish? What about the access route? Getting cut off by a rising tide can easily happen and it’s harder to judge an alternative route in the dark.

It’s a similar story for boat fishers: it’s much easier to navigate to your spot, position the boat, recognise structure and organise tackle, bait and berley when there’s still some light. Determining the direction and strength of the tidal flow is also easier – and you want a bit of light to judge the direction and length of your casts. Estimating distances in the dark is much harder.

Get the boat anchored up early, set up a decent berley trail and make a few practice casts so you know where your baits are going to end up. Once you are satisfied, cast out for real, relax and wait for the first bite. A dusk bite can come on any time after you arrive, but the last hour or so of daylight and the first couple of hours after the sun has set usually bring the best fishing.

Most of my dusk fishing has been in relatively shallow water straylining for snapper from dinghies and other small boats, which requires a fair degree of stealth. An aluminium dinghy is like a giant drum: every time you drop a knife or a sinker on the floor the sound reverberates through the water, scattering wary snapper far and wide. Loud voices have the same effect – and don’t start me on loud music!

We used to go as far as laying old blankets or sacks in the bottom of the boat to deaden the sound of any potential impacts, and also took great care to keep light use to a minimum.

As with rock fishing, a light source on the boat is indispensable, but you need to be careful with it, since bright light can easily spook fish in shallow water. Many larger vessels have deck or cockpit lights, which makes fishing in the dark much easier, but restrict the amount of light used as much as possible – many modern trailer boats feature under-gunwale cockpit lighting, which are great, but leave off the cockpit floodlights.

As a rule of thumb, avoid shining a torch or spotlight directly on the water when fishing at night. 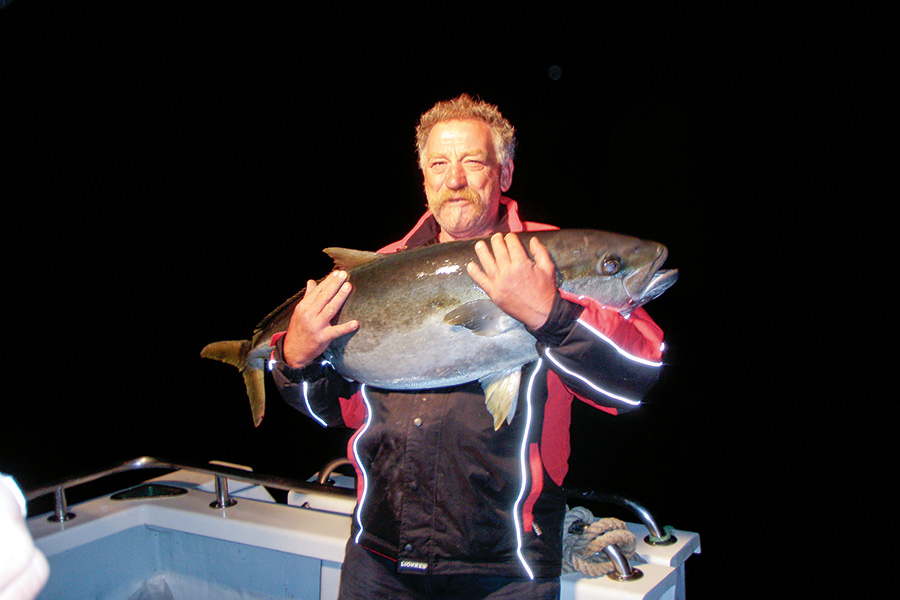 Kingfish are one species that will keep biting right into the night.

It is very important to be visible to other vessels when fishing, especially at night. Obviously, anchoring up and fishing in a navigation channel is not wise, but setting up to fish in any high traffic area can be dangerous, even more so in the dark. When night fishing, it is imperative you keep your wits about you and maintain a good lookout. While other vessels are obliged to keep a proper lookout, there’s no guarantee they will see you, so be prepared to warn them off.

While lights can be an anathema when snapper fishing in the shallows, an all-round anchor light is a requirement for anchored boats at night, even though it could potentially affect your fishing success. That said, the pool of light from a masthead or all-round white light is not such an issue in deeper water.

Even small dinghies and kayaks must carry a white light – often a torch – to warn off other boats if they come too close. Kayaks should always show a light after dark because they are so hard to see, and powered vessels capable of more than seven knots should display navigation lights (sidelights) in addition to an all-round white light when underway. Powered vessels over 12m must show masthead, stern and side lights.

When the bite is on, fishing can be fast and furious, but it can turn off just as quickly as it switched on. Neglecting to tend the berley trail, shining too much light on the water or making too much noise can stop the bite. This is especially true in shallow water locations, particularly estuaries and harbours where the water might be only a few metres deep – if that.

To make the most of the few short hours between dusk and full darkness, it pays to be prepared. You don’t want to be fumbling about in the dark re-tying rigs. Have a few replacement rigs pre-tied in case you break off or suffer tangles. Time spent unravelling a tangled line at night is not time well spent since the window of good fishing may be very brief. You don’t want to miss it.

Some anglers go so far as having baits pre-rigged on traces. This saves time if you need to re-rig. Indeed, rather than re-baiting or fluffing around unhooking a fish, some anglers simply unclip the old trace, toss the fish on ice (if there is a fish on the hook) then clip on a new trace and get straight back to fishing. This is routine for many shore fishers, especially club tournament anglers.

Although we like to remember balmy summer evenings with stunning sunsets and fish-filled twilight hours, the reality is often less idyllic. Even during summer, the bite can be short; in winter, fish might only be active for an hour or two, usually right on dark. Anglers need to be prepared to make the most of the prime time.

Sometimes, though, fishing at dusk is indeed a long, languid pleasure that stretches out for many hours and sometimes deep into the night. If everything comes together – weather and sea conditions, tide state, minimal boat traffic, a good location, proper boat positioning, attractive berley and a crew prepared to put in the casts, the fishing can be brilliant.

If there’s a pattern to fishing at dusk, it’s that smaller fish turn up in the berley first, usually well before dark, with fish numbers and average size improving as light levels drop (at dawn, with light levels increasing, the opposite tends to be true). The best fishing is often just before it turns full dark. Fish tend to bite harder and get bigger the further the sun drops.

Once the sun has set and twilight is over, snapper fishing usually tapers off and it’s time to go home. There are always exceptions but fishing deep into the night is seldom worthwhile – unless there’s a big moon, in which case snapper (and other species) may bite all night long. after a 45 minute battle we tagged it and set it free. - whangamata