Winter and spring storms are great for bringing fish on the bite suggests Craig Worthington, but the timing needs to be right…

Winter is very much a time for the extended week-day weather watch. With barely enough daylight hours available for evening rock hopping sessions during the week, all fishing hopes become dependent on the weekend. Good weather on Saturday or Sunday is helpful in this regard, but so are storms that roll through mid-week and stir up the ocean and the kelp. A winter storm is great for getting fish in a biting mood. 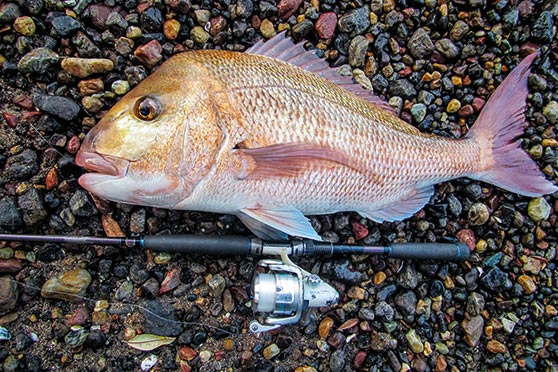 Big snapper move in on the back of winter storms.

A persistent sou’wester or southerly blowing for five days before the weekend, however, is no good at all. The sea might end up nice and flat on the east coast, but it also makes the inshore water cold and clear. It is a big snapper turn-off. On-shore winds and on-shore swells are the best, especially if they occur between Monday and Friday. By the time the weekend comes around you don’t want to be battling tough breezes and dangerous waves when standing on the rocks.

In an ideal world the wild weather should clear by Friday night, leaving a nicely messed up ocean and a remnant easterly swell for the weekend, along with light manageable winds from a westerly quarter. It sounds like a lot to ask for, but you’d be surprised how often it happens.

In winter 2019 we were surprisingly lucky with the way the cold fronts and low pressure systems came in. Many of them chose to land either side of fishable weekends meaning there were plenty of chances to get out.

One day in June 2019 a good-looking storm held back in the Tasman Sea for longer than expected. The wind stayed persistently onshore and was forecast to increase over a series of days. The weekend started looking like a blow-out, but then the onshore winds eased for a short space of time. It gave us a sliver of opportunity. There was one protected corner in a quiet bay where I knew we might be able to squeeze in a quick snapper attack before the weather finally cranked itself up to its full potential. My son Jack and I grabbed our gear and went for it.

On arrival we realised that the conditions were marginal. A full twenty knots of easterly wind was blowing against the coast. A ledge with a high rock wall behind it did, however, provide a ‘dead’ wind zone. The rock face seemed to block the wind and force it up. Most of the bad stuff was going over the top.

Similarly, the swell looked active and grumpy, but an offshore reef system was protecting the ledge we hoped to stand on from the worst of the big weather swells. There appeared to be no real prospect of rogue waves sweeping across the rocks. We figured we could fish safely.

Initially, Jack indulged himself in his new found passion for catching piper while I threw a bit of berley in the water and started looking for a winter trevally on fly. This little bay has a mix of reef and sand with a good patch of snag-free sand directly in front of where we stood. It is perfect trevally country and a good place to stop their head-long dashes for structure. We had caught plenty lately and I was quite hopeful for some more wild action from these crazy tackle busters.

Jack’s piper fishing didn’t go that well. Normally this bay is filled with piper, but the boisterous sea conditions kept pushing his small piper float back inshore. Eventually he gave up, picking up his 6-8 kg spin stick and casting out a snapper bait.

By this stage I’d landed a nice kahawai and had just released a small snapper. The hook-ups had come fast. It looked like there might be some fish on the chew. This was confirmed by Jack’s first bait quickly getting demolished. He reeled in and replaced it with another. This bait barely had time to settle before it was picked up by something fast. Soon a taut line was stretching across the bay and line was absolutely ripping of his reel.

This fish was screaming along. “What the hell have you got there?” I asked. “Don’t know,” replied Jack, “but it’s big!”

The fish responded by taking even more line.

“Wait for the jump,” I said, inferring that it probably was an eagle ray, but no jump happened. “It sure feels like a big snapper,” said Jack.

Sure enough, the rod tip started to do that typical ‘nod, nod, nod’ once the fish slowed down. However, we couldn’t be sure. Only visual confirmation would confirm its identity. In the dirty conditions this wouldn’t happen until the fish was virtually on the beach that lay to our left. We both hoped madly that everything would hold together and we would get this chance. A big set of rocks broke water further along the beach. These were a worry. If this was a kingfish, it could surely find its way in there.

Jack kept the pressure on and fairly soon I caught sight of a big red tail rolling in the surf. Snapper! And a beauty. I ran into the water behind the fish as Jack pulled it into the breaking waves on the beach. I went in for a tail grab, but a larger than normal wave picked up the fish and swept it up on the sand. The wave receded and the snapper was left firmly stuck to the beach. Landed! 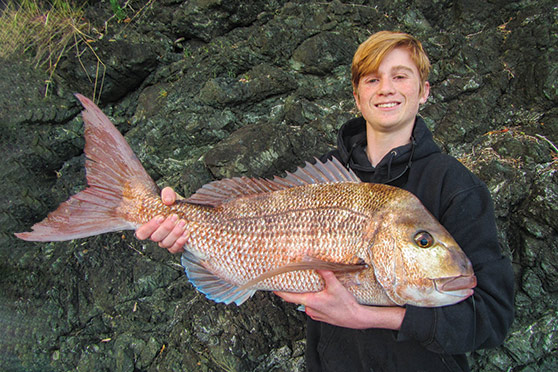 Jack's seven-kilo snapper was a great winter storm capture on his 6-8kg spin stick off the rocky corner of a pebbly beach.

That was a great capture in a spot that normally contains nothing more than parore and leatherjackets. The storm had obviously blown in some quality fish.

We yippied and yahooed like any father and son fishing duo would, took some pictures, and then grabbed our gear and ran. The swell was picking up with the incoming tide and was now sweeping right across the rock ledge on which we had previously been standing. We’d managed to squeeze in a short and productive fishing session at the beginning of a significant storm and had certainly reaped the benefits from it. It was a good winter’s Saturday.

By the next Friday the remnants of the blow were still with us and the swell was still pumping. Crucially though, it was starting to ease in some likely looking spots. We grabbed the opportunity while Jack’s brother Ben surfed at the local beach. Again, we had to find a rock spot where the swell was not so intense, and revelled in the sight of a milky green ocean when we found it. It looked like fishy water.

Sure enough, Jack did it again and quickly pulled out a three- and a four-kilo snapper respectively. This was in the middle of an afternoon in late June. They were rusty coloured kelpies that looked beautiful and were full of fight.

They were captures that really put the icing on the cake. The cool weather season of 2019 was good to the Worthington crew. We certainly got on a roll. You couldn’t argue with the consistent rock fishing success that we had weekend after weekend.

And all thanks to those gnarly mid-winter storms.