How professional fish filleters do it There’s a lot that we, as recreational fishers, can learn from those who get to fish for a living. In the second instalment in a series on commercial fishers – the first was on flounder fisherman ‘Piako Pete’ – Deputy Editor Miah Dixon visited the team at Sanfords in Tauranga to see how they process their catch from offloading to packing, and picked up some great tips on the way...

When we, as a family, go fishing, the deal has always been that the blokes fillet the fish, while I wash down the boat. As a result, my filleting skills are less than abysmal. With that in mind, I took a trip to the Sanford processing facility in Tauranga to see how the pros do it.

My guide for the day was Ken “Keno” O’Sullivan, a 35 year veteran of the filleting game who’d moved up the ranks from unloading boats as a 16-year-old, to establishing and running the on-site seafood store, to filleting the fish himself and managing the filleting team in the factory. If I was going to learn something from someone, this guy was it!

Working as a professional filleter

Despite what you might expect of a professional filleter, it’s not all about going as fast as you can. Instead, it’s about getting the technique down pat, and then getting progressively faster as you’re comfortable doing so.

It takes six months for Ken to train a new team member in the art of working with knives, and two years for someone to become fully competent and filleting at a good pace.

“We start our new team as trimmers, removing bones from the fillets, to help them get a feel for working with the fish, and using knives. It also builds up a bit of strength in the muscles that they’ll be using all day, every day, for filleting. From there, we transition them onto cutting (removing the fillets from the frame of the fish), just for a little bit at a time, until they’re competent enough to spend a full day doing that on all species.”

It’s also a reasonably physical job, standing for an eight-hour shift, and constantly using muscles in your lower and upper arms, something that not everyone can handle.

“It’s not just a job that anyone can jump into. I would guess that about 85% of people see just how physical it is, and opt out. But for those who are committed, it’s a great job, with great people.” says Ken.

So how does it all work?

When the fish come off the boats, they are graded by species and sent to the filleting area where 12-24 team members are waiting. On this particular day, the area was broken down into three areas, all linked by a conveyor belt – one for cutting, one for trimming and one for packing. What amazed me the most was how pristine the facility was. Everything was silver, white and shiny, with no blood or guts anywhere and not a scale in sight – a far cry from most at-home filleting set ups. It really is a testament to the skills of the people on-site.

When it comes to processing the catch, fish are conveyored into the cutting areas, and then scooped into bins in front of each cutter. The cutters remove the fillets from each fish, with the remaining frame and head being collected and sent off to be used in the likes of pet food (so even the dog can get a taste of NZ-caught fish!). 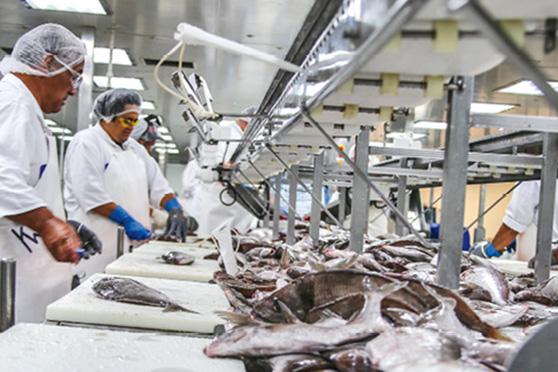 Each 'cutter' has their own station for filleting.

Once the fillets have been removed from the frame, each one is put through an automated skinning machine, which removes the skin and sends the ‘naked’ fillets down to a second table, where a team of trimmers remove the pin bones and any small sections of skin that are left on the fillet.

Once trimmed, the fillets are ready for packing. Depending on the destination, fillets are packed in polystyrene or cardboard boxes with a healthy dose of ice before being sent on their way. Subject to when the trucks arrive to pick up the packaged fillets, a fish could be in and out of the factory in a couple of hours, and on someone’s dinner plate as soon as that evening.

In the week that we visited the factory, the team would process seven tonnes of tarakihi, two tonnes of hoki and three to four tonnes of snapper, as well as some additional baitfish which are processed differently. These fish (excluding the whole-packed baitfish) were destined for various supermarkets around the country, as well as fish markets and restaurants.

But commercial guys are the baddies, right...?

Despite not being crew on a boat himself, Ken is quick to right the misconception that all commercial fishers are cowboys.

“There is definitely a misonception that all commercial fisherman are out there pillaging the ocean, and there definitely used to be a few rough guys back in the day. But nowadays, everyone from the skipper on the boat to the cutters in the factory are focused on sustainability, getting the most from the catch and not wasting anything.”

“Once the quota is caught that’s it. The boats come in and the fish are processed. And these quotas are set out by marine scientists to maintain sustainable levels of fish in the ocean.”

He and Jasin are both eager to point out some innovative new developments that are changing the way that fish “offal” from their factory is being used. Recently, Sanfords and Revolution Fibres have collaborated on a project to extract collagen from hoki skin to use in beauty products, namely face and eye masks. From a sustainability perspective, it’s another exciting way to ensure more of the catch is being used in a meaningful way.

As with any commercial operation, safety is paramount, and even more so when the standard tools of the trade are razor-sharp blades. The teams of ‘cutters’ wear chainmail on their fish-holding hand, with some cutters choosing to wear a rubber glove on the other.

If you’re looking for a buffer to protect you from any accidental knife slips at home, Ken recommends a cotton glove with a rubber glove on top. This gives a few extra millimeters of protection should your knife end up in an unintended position.

At the factory, all filleting knives are put in sheaths when not in use, especially when moving around from place to place.

Ken also points out distraction as being one of the biggest dangers when working with knives.

“Even just talking with others when working with knives can introduce an extra element of risk, as you’re not concentrating on where you’re putting your blade.”

He suggests that when you’re not using your knife, it should be placed in a sheath or somewhere that it won’t slide around or fall off your filleting table.

Ken’s preference when looking for an all-round knife for filleting, boning and skinning fish, is one that is somewhat flexible, but still has enough rigidity to give you proper control over your blade. A knife that is too flexible, according to Ken, can be dangerous, as too much flex can mean you are unable to tell exactly where the tip of your blade is when filleting a bigger fish.

Knives that are priced in the middle of the range are often a good starting point, in Ken’s perspective, as the steel will be a good enough quality to last being sharpened often, while also not breaking the bank.

While the team of filleters will wear down a Victory knife over 10 months of daily use, one of these models will last the recreational fisherman a lifetime if well cared for and not lost in the time being. The filleters use a range of knives for various skills, and different species.

Tips for Sharpening Your Filleting Knife

The first 50mm of your knife is the most important as that is what does the most work, so pay close attention to it when sharpening.

When using a steel, keep your knife-wielding wrist rigid to maintain the same angle as you move the full length of the blade down the steel – this ensures you keep the same angle down the whole knife. At the factory, the team work their knives on wet-stones every day, and use a round steel to keep the edges sharp between batches of fish. When sharpening your knife on either a stone or steel, sharpen each side an equal number of times to keep the angle of your blade even. Never clean your filleting knives in a dishwasher as over time this can damage the blade. When sharpening your knife, hold your steel upside down. This makes it easier to run the full width of your blade down on the same angle.

Filleting: When making any cut on any fish, it’s important to keep it steady. This is easiest achieved by pressing firmly down on the head of the fish to keep it in place. Keep your workspace clear of fish slime, to prevent your fish from sliding around.

When making your second incision along the top of the fish, down the back fin, run your knife right the way up behind the fish’ brain, where you’d usually iki it. There is extra flesh right up behind the head that is often missed when filleting.

Rather than trying to cut over the ribcage, cut as close as you can to the top of it, then continue filleting the remainder of the fish, around the rib cage. There is usually so little flesh on the lower section of the ribcage, that you are able to gently rip it off, once the rest of the fillet is free from the frame.

Skinning: Skinning a fish is a two-way action. Once you’ve made an initial cut to separate the flesh from the skin, using equal pressure, gently angle your knife down, and work it down the fillet, whilst pulling the tag end of the skin towards you.

in The Boat Shed
9 hours ago
fred01

in The Briny Bar
9 hours ago
Pcj

in Freshwater Fission
10 hours ago
smudge

Have a read of this, it may help:  https://fishandgame.org.nz/freshwater-fishing-in-new-zealand/...