As a long-term angler and watersports enthusiast, it’s fair to say that kayaks are definitely my preferred platform to catch fish from. Today’s more modern kayak designs are certainly opening the door for others to also enjoy this style of fishing as much as I do.

Quite often budget constraints influence potential anglers when going down the path of using kayaks. Newcomers to kayak fishing have the perception that they can do so successfully without needing all the bells and whistles.

I started out thinking this way too, mainly because I intended to use my kayak as a spearfishing platform. Once I realised the potential for fishing, things changed, and although I enjoyed plenty of success, it wasn’t always consistent.

At this time my fishing involved the use of natural bait, and armed with plenty of underwater knowledge, it did put food on the table. My personal addiction to kayak fishing escalated with the introduction of soft baits over 12 years ago. Not only did this open my eyes to even greater potential, but also gave me the ability to actively hunt fish from the kayak.

Eventually the addiction for this type of adventure became so great that I started looking for other ways to increase my capability. That was when electronics like a fish-finder came into the equation.

In those early days the kayaks available didn’t accommodate a sounder like they do today. Mounting the transducer would present challenges. Mounting the transducer at the rear as you would with a boat wasn’t viable due to the potential for water disturbance, drag resistance and damage. We overcame these issues by shooting sonar beams directly through the hull. The best way was by immersing it in a liquid placed between the transducer and the plastic. The result was satisfactory yet still had limitations.

This would soon change, though, with the development of a transducer scupper by Ocean Kayak that allowed the transducer to be submerged into the water. Eventually I bought a kayak that catered for a transducer, which allowed down-imaging and side-imaging sonar. It was then the true potential of marine electronics really became apparent.

Back in 2006, technology of this calibre was well ahead of what most anglers were using from their boats. Some of that can perhaps be put down to the then more common use of bait and berley, with the vessel sitting at anchor rather than drifting.

Another issue for boaties can be interference from outboard motors, which can direct air bubbles over the transducer if it is poorly positioned, affecting the signal and return. Kayaks don’t suffer this problem, with transducer positioning usually at the forward area of the cockpit.

Without a motor to cause interference, the resulting sonar returns are some of the clearest available on screen.

It’s no wonder that these images provide a much greater understanding of the underwater world, and when combined with a kayak’s stealth, plus modern fishing techniques, the results can be mind-blowing.

Modern fish-finders used with kayaks are more powerful and sophisticated than ever. As a result they require a better power supply. The sealed lead-acid type of battery (SLA) remains the most commonly used and cost effective, but modern lithium type batteries are becoming popular. They are much lighter that SLAs, although they do have a significantly higher cost. These negatives are offset by lithium batteries offering many more charges than an SLA with a much greater lifespan as a result. Lithium batteries also handle discharge better than lead-acid batteries.

When considering a fish-finder battery, more is always better. A top quality/specification battery is the best option for long term use. Not only does it allow you to run the fish-finder all day, but it also prevents draining the battery to low levels that can shorten its lifespan.

Also consider that some battery chemistries give fewer amp-hours if you discharge them at a fast rate – this is called the Peukart Effect. This plays a major part with lead-acid batteries, but is less of a problem with Lithium Ion and Lithium Polymer batteries.

For lead-acid batteries, the rated capacity (i.e. the number of Ah stamped on the side of the battery) is typically given for a 20-hour discharge rate. If you are discharging at a slow rate you will get the rated number of amp-hours. Doing a search on the internet using the keywords ‘calculate power drain, battery’ will bring up websites with charts that detail this effect for different discharge rates and these can be used to work out which battery is more suitable for your purposes.

As a general guide, for SLA batteries supplying a 12-volt system, the most common set-up for fish-finders, a nine amp-hour capacity will cater to units with a screen up to five inches, but a 12Ah battery is better suited to full day use. Seven-inch screens with GPS, sonar, down-imaging and side-imaging require at least a 12 amp-hour battery with 18Ah a better option.

If you position your kayak’s fish finder close to the water it’s more likely that problems will arise from water contact.

It’s important to protect the connections between the power supply and the unit from water contact. Connections on the power cable and battery can corrode if left unmaintained. Coat the terminals with dielectric grease during initial installation and then repeat this every year or as necessary.

Even though the fish-finder does provide a certain amount of sealing where the cable plugs in, it’s still worth protecting this area and your unit as a whole from excessive water contact. An aftermarket cover provides all over protection.

Learning to read your sounder and then adapting fishing techniques to suit the situation at hand will give you the ability to hunt fish like never before. For example, using micro-jigs is far more effective when you are equipped with a fish finder. By stopping on fish sign and deploying a jig, you can track its progress as it falls to the sea floor. Watching species like snapper engage with the offering, by rising up to the point where a strike is imminent, is even more exciting. 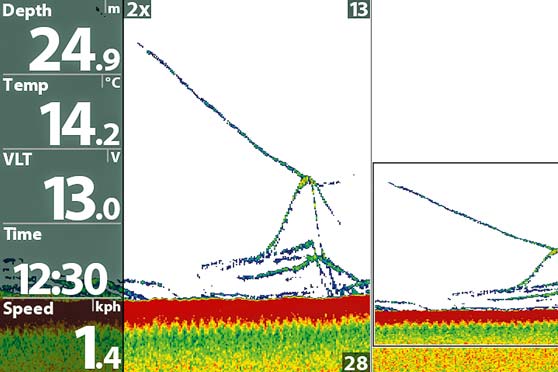 This means it’s also possible to watch the jig being worked, which has provided me with hours of fun. The same can also apply to other lures like soft-baits, skutes and hard-bodied lures, as long as they are sinking.

Pedal-powered kayaks are ideal for these techniques, especially when you can reverse-pedal. Although not quite as efficient as pedalling, paddle power can be adapted to this style of fishing by reacting quickly with a sturdy brace of the paddle and a slight reverse motion to bringing the kayak to a halt. Good lure placement and quick reactions will eventually win over, so it’s crucial to keep a close eye on the sounder to see what’s happening. Another useful trick is to hold the kayak directly over the jig or lure, which ensures you are in visual contact on the sounder.

Fish finder technology becomes more advanced with every passing year and the latest units are better than ever. Units like the Humminbird Helix provide “Mega Chirp” at 1.200MHz, which has taken the ability to see what is happening below the surface in real time to the next level.

Not only have I successfully targeted snapper using a combination of fish-finder, lure and kayak placement, but also with other species in both salt and fresh water. In terms of the sensation this type of fishing provides, I would say it’s a form of hunting. As a solo angler independently operating a vessel and successfully catching fish solely on artificial lures, it is very rewarding to fish this way. 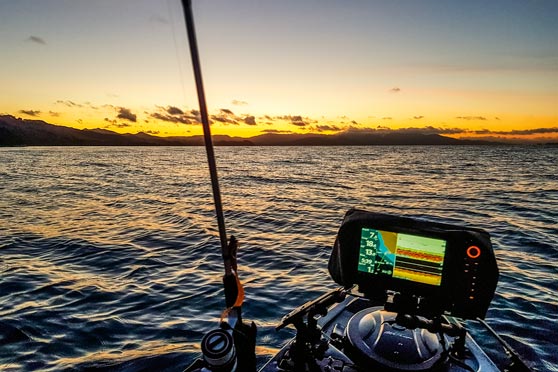 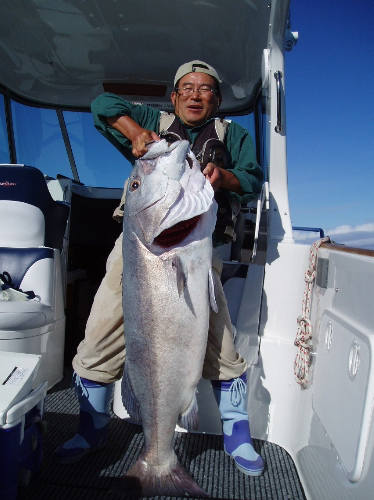 Toshi with a Mega- Puka - Whitianga