Did Lockdown Affect the Fishing?

Is two months of no recreational fishing long enough to improve the fish stocks in some of the hotspots around NZ? This was the question Ethan Neville was musing over during lockdown and quickly started investigating as soon as Level 2 came into effect. He reports…

Judging by how busy the boat ramps were on the first Saturday of Level 2, a fair few of us rec fishers had high expectations for
post-lockdown fishing. My mates and I had spent a considerable amount of time speculating about how easy it’d be to catch the resident Flat Rock (Hauraki Gulf) kings which hadn’t seen a lure for close to two months, and about how many snapper would be schooling around Kawau Island, feeding on the unmolested baitfish and anchovies that were surely boiling up all over the gulf.

When the conversation ended with an intense discussion about which colour floating stickbait would work best on the 20lb+ snapper bustling up in the shallows, we realised we were being a bit optimistic. Regardless, we – and I imagine a few others as well – were excited to see what’d happened to our local patch after seven weeks of no recreational fishing pressure.

Long story short, my speculation was ill-founded. The fishing around Kawau – from the shallows out to 50-odd-metres, as well as around Flat Rock – was exactly the same as every other May: a fair bit of sign hugging the bottom and a few birds hanging round, but the fish were only on the chew for brief periods. The kingfish sign at Flat Rock was scattered, and it didn’t look like there was anything around to ball up the baitfish. We came home with dinner, but certainly nothing to get excited about.

I wasn’t done yet, however. I wanted answers. So, I got in touch with a select group of fishermen throughout the country to see how their post-lockdown fishing experience compared with mine.

Darren Napping knows the Bay of Islands better than most. He’s been fishing those waters since he was a kid and is now the owner and operator of Days Out Charters. When asked whether he has noticed any improvement in the fishing after lockdown, he wasn’t confident there has been a huge change.

“It’s a hard one to judge. The fish have been in close, but that might have been just seasonal,” he tells me.

Most inshore reefs have fish on them, which in his mind could be lockdown related as no one has been around to catch the resident populations, but that’s the only noticeable improvement from this time last year.

Baitfish have been tough to find, as is normal heading into winter. However, Darren also noted that commercial fishermen were still operating in the bay throughout lockdown, which may have been why baitfish stocks didn’t improve.

Overall verdict: little improvement in the Bay of Islands.

A Bay of Islands double!

Moving further south, the sentiment is the same. Nick Jones from Hauraki Express charters tells me the fishing is what he’d expect at this time of year.

For Nick, “The break was too short to assist any species’ breeding season or make fish less wary of people and fishing gear. There might have been a few less fish taken out of the ecosystem by rec fishers, but over two months that’s a drop in the ocean (pun intended!).”

While the kingie fishing has slowed down considerably, Nick says they are still catching plenty of snapper, which is the normal late-autumn trend (something my own experience in this area also attests to). 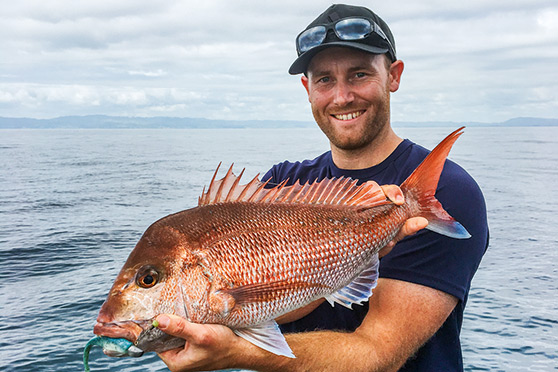 Ben Francis took a break from the West Coast, catching this well-conditioned snapper out of Mangawhai.

Ben Francis has his ear pretty close to the ground when it comes to West Coast fishing, and his answer to my question came as no surprise:

“My thoughts would be that there is no obvious difference for this time of year.”

Over the bar, the inshore bottom-fishing has been varied, which he tells me is normal in this period. The harbour fishing has been equally hit and miss, with some reporting great catches while others head home empty-handed. The broadbill fishery, in his mind, hasn’t been affected at all considering how deep and geographically remote their grounds are, but a handful of swordfish have been caught since lockdown.

Overall verdict: no improvement out west. A respectable chilly bin with some nice snapper taken from the west coast.

“Yes it has!” is what Pete Lamb (Pete Lamb Fishing) resolutely exclaimed when I asked if the fishing had improved.

“There’s been superb fishing off the shore – unparalleled in all my time fishing for this time of the year.”

For Pete, the snapper have come in close as a result of not being bothered over lockdown. Remarkably, three snapper around the 20lb mark have been caught by surfcasters since lockdown Level 3. The story is the same with kingfish. After only a couple weeks of post-lockdown fishing, 12 kingies had been caught not far from Pete’s shop. It usually gets quieter at this time of year as the fish head deeper, Pete tells me, but this was yet to happen at the time of the interview.

Pete did remind me that other factors such as higher water temperatures need to be considered. Beyond this minor reservation, however, his belief in the lockdown’s positive impact on the fisheries remains firm. This 39kg donkey of a kingfish was caught by Kemp Ow in the Wellington region.

Nelson resident and avid fisherman Toby Munro is just as positive as Pete. Snapper and blue cod are still hanging around in the sounds and are regularly being caught in the shallows – something which is apparently rare in these parts. Fish are even being caught in 10m of water from the shore, which Toby says hadn’t been heard of since back in his “dad’s day”.

The same is true in Nelson Bay, with the snapper fishing still hot despite it usually cooling off in mid-April at the latest. The mild autumn may be a contributing factor, but in Toby’s mind, there’s no doubt the lockdown is central to this lingering bite.

D’Urville Island has also been fishing well since lockdown. Toby has heard reports of a 28lb snapper and 35kg kingfish being landed, and there are plenty of snapper to be caught in 10-15m of water.

Another bonus for Toby has been the fantastic flatfish action. He has been catching flounder and sole almost at will since the start of Level 2. For South Island fount of knowledge Peter Van Ekelen, it’s been ‘business as usual’ since lockdown.

In his words, there’s been “less of a take than what we would’ve expected, considering the opportunity that was there.”

There have been reports of groper and a few cod being landed out of Akaroa, but that’s expected at this time of year. Gurnard are still being caught, but again, not to the level where the lockdown can be given credit.

Peter also noted how influential the weather is on South Island fishing at this time of year, and since lockdown – as for most of us further north – it hasn’t been great. He made it very clear how hard it was to watch the dead-flat seas during lockdown, only to see them rough up the moment Level 2 started (a cause of great frustration for all of us!). Groper and a few cod have been landed out of Akaroa.

So what to conclude?

There is no doubt the earth has been given a long-overdue rest over lockdown. Mt Everest is visible from Kathmandu for the first time in decades, there is clear water in the Venice canals and blue skies in some of the most crowded cities on earth. But it’s going to take longer than a month or two off the water to restore our fisheries to abundance – and this break would have to include both commercial and recreational fishermen.

While Nelson and Wellington saw improvements, these in part continue trends which have been evident over the last couple of years – particularly in Wellington – and are closely linked to the higher than usual water temperatures. For the rest of the country, no noticeable change was evident. As LegaSea predicted at the start of lockdown, ”rebuilding depleted fisheries and marine ecosystems requires dedicated policy, a commitment to apply meaningful cuts to catches, and regulating against the use of destructive fishing methods… abundant fisheries and a healthy marine environment will not materialise due to a month long, or short-term, fishing closure.”

Overall verdict: there are no cheap and easy fixes when it comes to fisheries management.

Ethan has covered a small selection of NZ’s fishing hotspots, so if your local patch wasn’t discussed and you have some thoughts to share, get in touch with him at [email protected]! 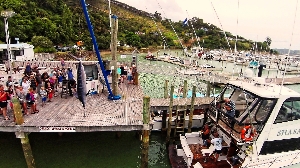 Flying cam at the waystation - whangaroa