Cyril Jordan’s work has been ‘sat on’ by many of the best names in the sportfishing business. Grant Dixon catches up with Cyril, a household name in gamefishing circles and whose business is one of the magazine’s longest-standing advertisers.

To be fair, it was not the man, but his game chairs that have supported the posteriors of thousands of anglers fighting gamefish since 1989!

Cyril, who will be 76 in February, grew up in Whangarei and Hikurangi, before moving to Kaikohe where he undertook an apprenticeship as a fitter and turner at Browns Engineering. He excelled in the trade and it served him well in future years. After a stint at Edwards Engineering, Cyril and wife Thelma went out on their own in 1972, setting up a vehicle wrecking yard and machine shop.

One of the things he was asked to manufacture was a fighting chair for a game boat, and thus Cyril’s Gamechairs, manufactured by Cyril Jordan Engineering, was born. These names are still associated with the gamefishing scene today, both here and overseas.

Cyril does things old school – there are no CAD drawings and computers, just the ‘eyeometer’ and a natural craftsman’s skill. All Cyril’s ‘design work’ is done in a large journal which features numerous notations and hand-drawn plans. He still has his first notebook which contains all the names of the first 50 boats and skippers/owners he built chairs for. It is a who’s who of New Zealand gamefishing – Gavin Cross and Erelyn; Bruce Smith and both Strikers; John Going and Delray; Dave Arrell and Double Strike; Alan Stark and Crows Nest; Bruce Martin and Predator; Brian Worthington and MG Sportfisher; Sapphire, Manaia – the list goes on and even includes a bunch of chairs exported across the Tasman for marine chandlers Austral. 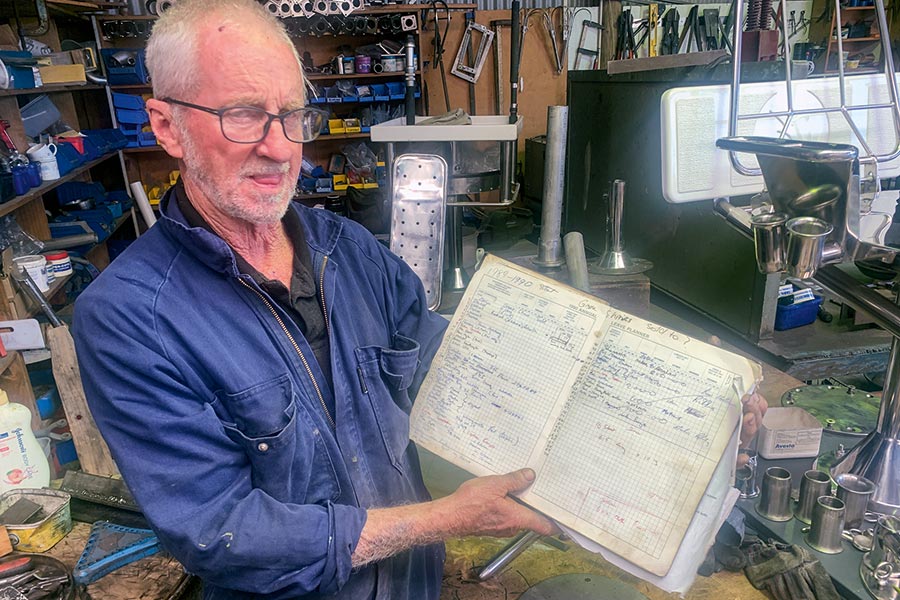 The first order book, with a list of the first 50 chairs made by Cyril Jordan Engineering.

A chair from start to finish takes Cyril around two weeks to complete. He leaves early in the morning from his home in Paihia to the Kerikeri workshop, knocking off at around 2:00pm, setting a pace many younger tradespeople would struggle to keep up with.

And it was not just game chairs that Cyril built for the fishing fraternity. He built two tuna towers, the first of which went on the Bruce Smith skippered Striker, a well-known Russell based charter vessel. The other was for another Bay of Islands boat Xtesea. These were manufactured at the workshop, then at Pakaraka, before being lifted by helicopter and attached to the boats. Once again, the eyeometer and the philosophy of ‘measure twice and cut once’ had proven their worth, the towers slotting into their bases like a glove. It's not just game chair manufactured in Cyril's workshop. This part is for a new commercial vessel built in Opua.

“I was pretty pleased with that. I remember we built Striker’s for $15,000, which was a fair price at the time, but not even close to what a similar tower would cost today.

When it comes to building the chairs, Cyril says “The only thing we didn’t do on-site was the vinyl upholstery and the wooden footrest. We had our own electro-polishing plant and would also do work for other engineering outfits in the area.”

You look around the somewhat cluttered – Cyril would probably call it ‘busy’ – workshop and there are various chairs and projects either completed or still in progress.

A barbecue spit, berley muncher, gaffs, rod holders, outrigger bases and even a duck plucker are all products of Cyril’s metalworking skills, along with various one-off parts for boats and machinery. 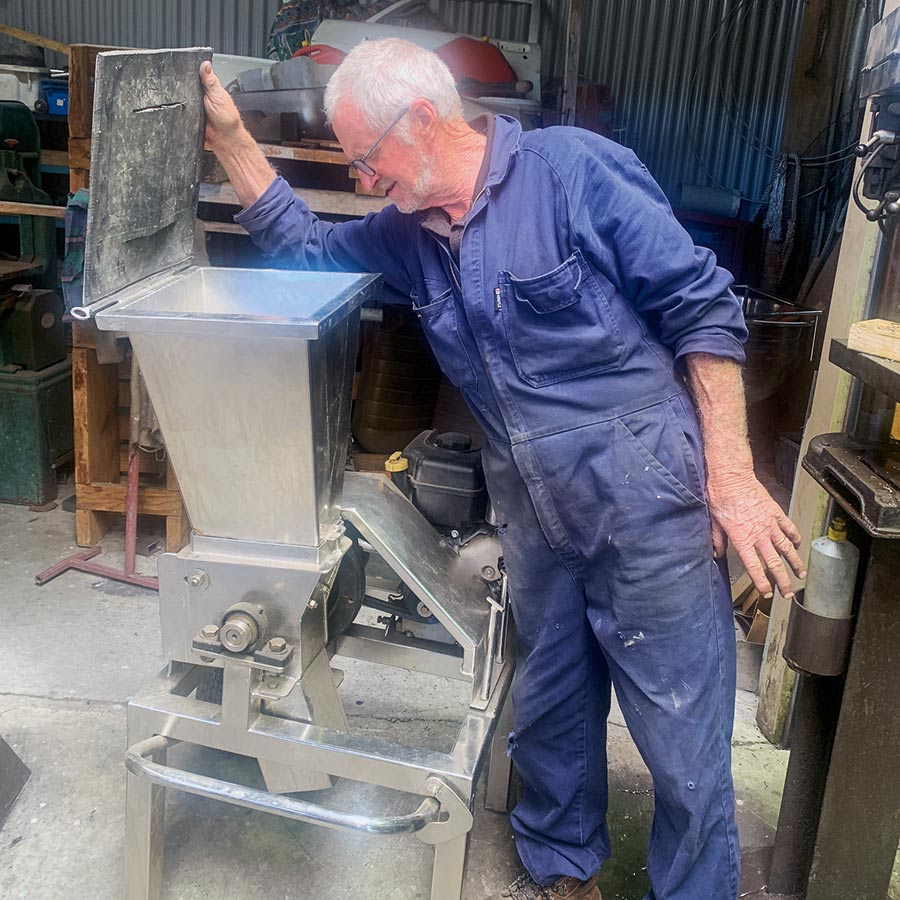 This berley maker is one Cyril's creations.

If we need further testament to Cyril’s metalworking skills, you only have to look in his Paihia garage where there are two beautifully restored vehicles – a Massey Fergusson 135 ‘boat tractor’, and a Holden EH ute, one of two Holden utility vehicles he has.

While the ute has been immaculately restored and customised, it is the tractor that will be of special interest to readers. 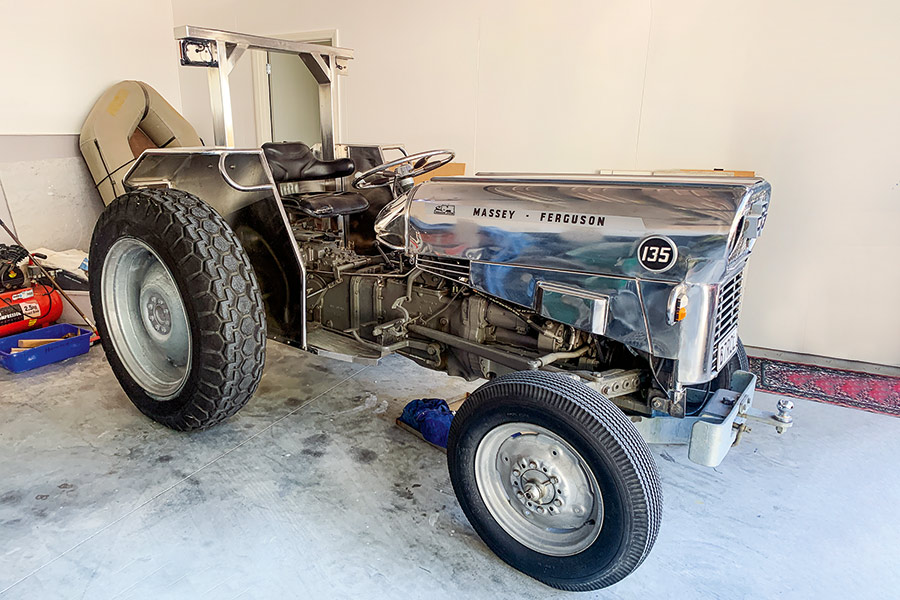 This refurbished Massey Fergusson 135 tractor is a head-turner when Cyril uses it to launch his boat at the nearby Waitangi Ramp.

“When I bought it, it was a complete rust bucket and people asked, ‘what the hell did you buy that for?’ I removed every panel and replaced them with stainless steel ones. It certainly is an eyecatcher when I tow the boat to the ramp where the tourists particularly are drawn to it.”

Boats, especially building and refurbishing them, have been a big part of Cyril and Thelma’s lives. Thelma is passionate about her gamefishing and has over 100 billfish to her credit, caught over 40 years of targeting them both at home and overseas. Thelma has not been adverse to pulling on the overalls and helping in the workshop, but not so much today. Her main involvement in the business is doing the accounting, not to mention the all-important task of making Cyril’s lunch every work day!

Over the years the Jordans have had various boats, several of which Cyril built himself. Yukari was one such vessel. A 14 metre (46ft) sportfisher built along the lines of the popular Formula hull, the boat ended up in the Cabo San Lucas, Mexico charter fleet.

“I was dealing with an American who wanted to buy a game chair – I ended up selling him the boat.”

While berthed at Westhaven awaiting shipment overseas the vessel was completely stripped out by thieves and had to be refurbished before the new owner could take her over.

Cobra was another vessel to be given the Jordan treatment. An 11-metre (36ft) Bertram, the vessel was given a complete refit and provided the family with many hours of boating and fishing pleasure.

When asked about retirement, Cyril says he still loves his work.

“People are always coming to me with ideas and wanting this and that done for their boats – it makes life interesting.” 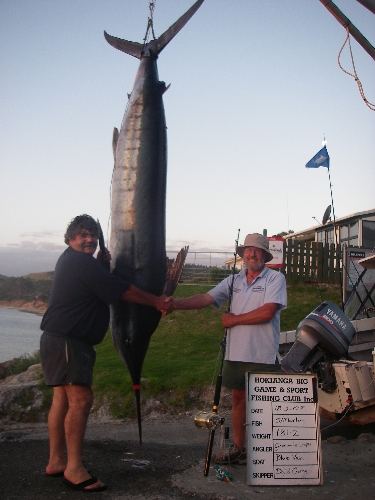 What a great way to start a weeks gamefishing - Hokianga