Anglers who visit tropical areas will probably know all about ciguatera poisoning, but if the hoo-ha we are occasionally treated to about it in the mainstream media is anything to go by, plenty of Kiwis don’t. Sam Mossman investigates.

A number of years ago I was staying in a newly built, fishing-oriented resort in Fiji, doing a bit of research into the fishing in the area and trying out some different fishing techniques. Downrigging was a new technique then and we had a lot of success trolling scad baits rigged with chin weights, deeply and slowly along the outside of the coral reef. I doubt if that zone had seen much fishing pressure before as the fish we caught were XOS predators, including some seriously lumpy barracuda and spanish mackerel, as well as some of the biggest coral trout I have seen.

That evening our skipper, Max, selected the largest of the coral trout, about 75cm long, for his family’s dinner. He should have known better, being a third generation kaivalagi (white) Fijian, but by the wee hours of the morning the whole family was down with ciguatera poisoning and fighting for access to the bathroom.

Ciguatera poisoning comes from eating fish contaminated with ciguatoxins, which, in turn, come from a tropical dinoflagellate (tiny single-cell organism) that lives on microalgae growing on coral and tropical seaweed. Small reef fish eat the algae and then bigger fish eat the smaller ones. At each level, the ciguatoxin bio-accumulates to greater levels and the big reef-dwelling predators (such as the monster coral trout Max and his family dined on) cannot be eaten without a pretty good chance of poisoning.

Symptoms include moderate to severe diarrhoea, nausea, abdominal pain and vomiting. Ciguatoxin messes with your brain, too. Neurological symptoms commonly include cold/hot sensitivity reversal, numbness around the lips and tongue and tingling in the limbs. In addition, muscle weakness, extreme fatigue, headaches and dizziness are also reported. These can start between two and 48 hours after eating contaminated fish. Severe cases of ciguatera poisoning may result in shortness of breath, salivation, tearing, chills, rashes, itching and paralysis.

There are about 50,000 reported poisonings worldwide per year, but they rarely cause death (less than 0.5%). After exposure to ciguatera toxin, certain things may trigger recurrent symptoms, such as eating any type of fish, alcohol, nuts, caffeine, chicken or pork. Even physical exertion can mean a relapse. The symptoms can persist in varying severity for weeks to months after the acute illness. Certainly not my idea of a good time!

Do we have it in NZ?

Ciguatera was first described by a surgeon’s mate on Captain James Cook’s ship, HMS Resolution, in 1774 and is the most frequently encountered form of seafood poisoning. It occurs most commonly in the Pacific Ocean, Indian Ocean and Caribbean Sea between the latitudes of 35°N and 35°S. The southern-most latitude mentioned is about that of Kaitaia, but I suggest that 35°S is just a nice round number chosen because it matches its northern counterpart. As far as I know, there has never been a case of home-grown ciguatera in New Zealand.

Although on average there are about eight cases a year that end up in our hospitals (others are not severe enough to warrant hospitalisation and many are not reported), they can mostly be traced down to people visiting the Pacific Islands and eating fish there, or buying fish up in the island markets and bringing it back to New Zealand. One cluster of four cases that ended up in Wellington Hospital several years ago had all eaten the same moray eel, which was cooked in NZ but purchased at a market in Samoa.

What is safe to eat?

Obviously, not all tropical fish species will give you ciguatera. Pelagic species – including yellowfin, mahimahi and wahoo – are usually fine to eat, and these are the species mostly served in tropical restaurants.

In the tropical Pacific, reef predators, including large trevally, red bass, barracuda, tropical groupers, amberjack and coral trout, spanish mackerel (particularly larger specimens in north Australia), along with species such as parrotfish and moray eels, are prime candidates to give ciguatera poisoning if eaten, with larger specimens being a greater risk as they have had more time to build up higher levels of toxins. 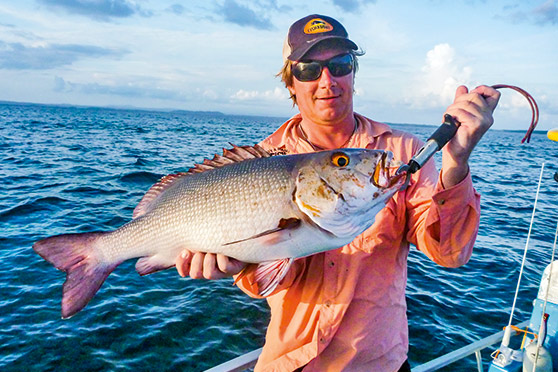 Red bass are a common source of ciguatera poisoning and should not be eaten.

However, dedicated deep-water tropical species (which stay below 200-plus metres) such as kusakars (saddle back) snapper, ruby and flame (longtailed) snapper do not seem implicated in ciguatera poisoning, presumably because they are below the photosynthetic zone. A good thing, as they are among the most delicious fish in our watery world. However, it pays to seek the advice of locals in any given area, especially any knowledgeable ex-pats, before eating fish. 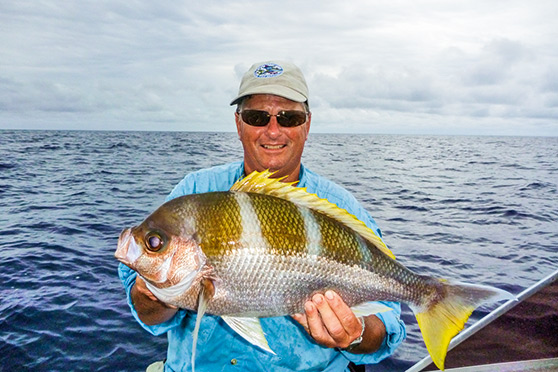 Deep-water tropical species (living in 200m-plus below the photosynthetic zone) such as this kusakars snapper, caught in 300m, are not implicated in ciguatera poisoning.

Why are some areas worse?

It seems impossible to give definite advice about which species of fish to avoid eating, as this seems to vary in different regions and different times of year, according to various local people I have asked. You get stories like “we don’t eat this fish after November” or “we don’t eat these fish from the weather side of the island, but it is OK from the sheltered side”.

This advice sounds a bit untrustworthy by its nature, but considered in context, it may be partly right, due to a factor that effects the danger of ciguatera which has only been discovered recently.

This is an important bit: It appears that the type of algae that hosts the dinoflagellate that causes all the trouble prefers, and is an early colonist on, dead coral. More plainly: dead reefs breed infected fish food, and humans get sick when they eat the fish that eat it, or the predators further up the food chain that accumulate the toxins.

Reef disturbance such as that caused by cyclones, or construction work like blasting channels in coral reefs and the construction of piers or wharves, can result in dead coral. This explains some of the erratic nature of ciguatera poisoning and makes some of the local advice mentioned above seem more credible. For example, the exposed ‘weather’ side of an island is more likely to have smashed up (dead) coral reef; and November is the beginning of cyclone season in the Pacific, during which you can expect a lot more dead coral as big storm strikes can damage the reef. Take the dead coral factor into account and the distribution of ciguatera-bearing fish starts to make more sense.

Other causal factors include increases in water temperature; sediment runoff from land activities; increased nutrients in the water (e.g. from treated or untreated sewage, and fertilisers); rubbish dumping and other activities that damage the reef. Because fish are mobile, ciguatera poisoning is not confined to the immediate area that may have triggered an outbreak.

In some cases, a ciguatera outbreak can have benefits for fish populations and sportfishermen. An example in recent times is the trevally fishery in Rarotonga and Aitutaki, in the Cook Islands. Trevally fishing in this region is best in the summer months when greater numbers of them tend to move onto the reef edges and into the lagoons and channels. Being very effective reef predators, trevally, especially larger giant trevally (GTs), are species that are likely to accumulate ciguatera toxins.

Ciguatera poisoning really ramped up in the region about two decades ago. In 1996 this figure peaked at about 300 reported cases of poisoning for the year and it took a while for the local people to get their heads around the fact that fish they had eaten for many years were no longer safe to consume. Larger trevally, especially, were a problem and the local fishing clubs stopped accepting them for weighing in contests as they could not be eaten afterward.

For this reason, trevally are much less molested in Rarotonga and Aitutaki these days, leaving a prime catch-and-release tourist fishery to develop. These days, destroyer-class GTs are often seen at the charter wharf in Avatiu Harbour, especially when the boats are cleaning their catches. On a recent visit I watched one such behemoth cruise past almost within touching distance, glaring balefully at me – I swear I have never seen a bigger GT! It must have weighed in excess of 50kg.

By general agreement, these beasts are seldom fished for by locals but these monsters, and many other trevally species, cruise right around the island fringes, offering a considerable challenge for anglers, especially those who fish for them from the shore. Cook Islands tropical trevally are one group of fish where numbers seem to be improving, a rare bright spot in a world of decreasing fishing opportunities. 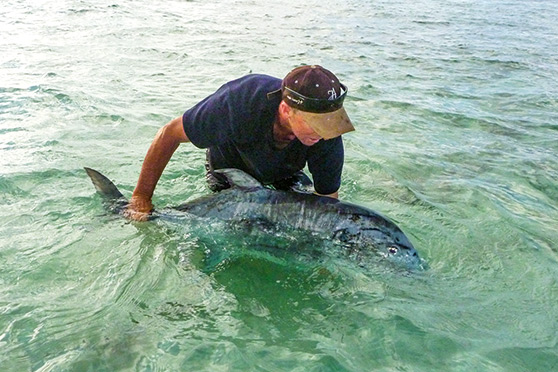 Toxic trevally; ciguatera in the Cook Islands has made GT fishing catch and release only.

How to avoid ciguatera

*Species to avoid vary from region to region.

*The larger the fish is, the higher the risk of ciguatera.

*Some local people suggest offering a sample of suspect fish to the family cat. If the cat refuses it, or gets sick from it, don’t eat it yourself! This is a bit tough on Fluffy of course, and not a proven method. In other regions, some locals suggest flies or ants should be used to indicate suspect fish. But again, this is not a scientifically tested method.

*Avoid cooking and eating the head, roe, liver or other viscera of warm water fish as Ciguatera toxin is more concentrated in these body parts and they may increase exposure.

*Avoid eating reef fish from regions with dead coral or that have within recent years suffered coral damage from cyclones or construction, ‘bleaching’ or polluted runoff.

*Although scientists are working on it, there is still no quick, cheap and accurate way of testing for ciguatera contamination in fish.

*Cooking does not destroy these toxins and they are resistant to gastric acid. A succesfull girl's day out on the Mahimahi, Yum - Fiji