Chasing Snapper with a Handline

Jason Neute put the rods away on a recent Far North adventure, but still had no problem pulling in big snapper from the shallow water…

I purchased a couple of Pro Hunter handlines a year ago, planning to fish them in the Far North when the shallows held a good number of fish in one of our spots. I stowed them up front in the storage compartment in the little FC, but unfortunately, my plan did not come to fruition. They lay in the boat unused and forgotten about.

The following season saw perfect conditions and Stevo was keen for a catch-up fish in the little FC430. Stevo was holding the boat after we launched it and soon realised there were no rods or reels on board. It was a prime day to get out the once-forgotten hand lines, and the look on Stevo’s face when I told him we would be handlining for big snaps and gurnard was priceless! Over the years, I have caught some solid snapper without the rod and reassured Stevo he would have a lot of fun hooking into big fish on the handline.

MetService and SwellMap had forecasted a good day for a fish, and we headed off to our spot in mirror-like conditions. The first spot was 4-5m deep, and the ideal place to start our handlining adventure. We set the lines up exactly how we would when straylining with a rod and reel – a little half-ounce ball sinker running straight to the hook.

The tide was already well on its way in, but there was not as much current as I had hoped for. We still used a berley despite the lack of tidal flow. I gave it a good crack and threw out my first bait. We were using half pillies and were also hoping for a fresh kahawai.

The fish normally come on the bite once the berley kicks in, so I tucked my hand caster in the corner and gave the berley a couple of big cranks to help the trail. There was zero wind. We sat in utter quietness but somehow it still felt fishy. Stevo doing the mahi - you have to earn your fish with a handline!

Suddenly, my line started to move sideways. I grabbed it as it went tight and I struck. There was that heavy pull you get when handlining and I was hooked up to a solid fish. With the lack of current, I gently fought the fish, pulling line in and then letting it back out when it wanted to run.

Stevo didn’t believe me when I told him I had a solid fish on as there was no buckled rod or screaming reel to be seen or heard. Because I was fighting it gently, the fish didn’t put up much of a fight. Every now and then it would pull some line, and I would let the line flick through my fingers so it didn’t go nuts.

The great thing about fishing with a handline is you never know what’s on the end of the line. I did think at first it could be a big kahawai until I got a quick glimpse of a big pink and white tale.

“It’s a big fish Stevo, a big fish. Grab the net!” I yelled at Stevo, who still didn’t believe it was net worthy. As soon as Stevo saw the size of the fish, he quickly grabbed the net and became excited. Man, what a fish to land on our first bait and even better on the handline – it was 70cm easy.

Stevo netted it and he still couldn’t believe his eyes. It was such an awesome fish and in such impressive condition. We took a couple of quick pics and then watched it disappear after I dropped it back into the gloomy green water – that’s what I’m talking about! What a great start to our little Reel Kiwi Fishing handline adventure.

Stevo was next to hook up, and this time it was a kahawai. Although he was hoping for a snapper, it would give us some fresh bait.

Nothing was too interested in my offering but Stevo had instant success again, hooking up straight away on his next bait. This could have been his first snapper, but we will never know as he dropped it mid fight. Stevo was now getting excited and was stoked to be experiencing a different way of fishing.

My line went tight again next and I was hooked up to another fish. It was a nice little snap around 50cm, which made its way to the bin this time. It then went a little quiet and with the tide still rising, I told Stevo we were going to shift to one of my favourite incoming tide spots.

Stevo pulled anchor and we headed off. Our second spot usually holds some good fish, including some nice big gurnard. This spot is around 8m deep with a little more current flow, which is more favourable. We sat through the tide with very little action, only picking up the odd fish – but they were nice eaters to 45cm.

We sat tight until the tide turned, hoping the fish would come on the bite on the outgoing. It didn’t kick off like we’d hoped, but we still managed a couple of nice fish. Every time we talked about moving we would get a good hit or catch a nice fish, so we decided to persevere. Eventually, with 3-4 nice snaps in the bin, it was time to shift to our outgoing spot where we could target gurnard.

We decided to put in an extra berley at our third spot, so we dropped it to the bottom and flicked out our baits on the handlines. I had hope for this spot, even though it had been a slow (but fun) morning. Stevo was heading back to Tauranga the next day and was keen to take a bit of fish home – particularly a few carrots.

On the outgoing the current picked up, so we cranked up the berley once more and it didn’t take long for the bites to come on. Although the first few bites felt small, they also felt very carrot-like. Sure enough, my first fish up was a nice fat gurnard. The excitement kicked in again and I was stoked to have caught it on the handline.

Stevo was getting lots of nibbles, and I threw out a fresh bait and got nibbles straight away too. Another fat carrot was soon on board, but this time it was Stevo who pulled it in. I hooked up as well but it did not feel like a carrot as the line went tight and flicked through my fingers. Looks like I was back on the snaps. The great thing about this time of year is that all the smaller models thin out and you mostly land snaps from 45-70cm. The snapper I pulled up was solid and Stevo had also hooked up and landed another nice carrot. Stevo and Jason had no shortage of double hookups.

As the day moved on, the snapper started turning up in numbers and invaded the carrot patch. The snapper where brutal and our fingers were taking a thrashing, but we were so excited to be pulling up snapper after snapper that the pain did not deter us from continuing on fishing.

Solid snapper (up to 70cm) were smashing our fresh kahawai baits. Stevo was having a blast and I was loving it – our handline adventure was on fire. I was cranking the berley and every now and then my yellow handline would skip across the boat as another solid snapper grabbed my bait – it was just going off!

It got to a stage where it was getting a little ridiculous, with 50-60cm fish constantly hitting the deck of the little FC. We released what we could and binned 11-12 nice fish so that Stevo had a few to take back to Tauranga with him.

Our handline adventure had come to an end and it had been better than I‘d hoped. I was stoked Stevo was there to share it with me and had enjoyed it just as much as I had. It’s not a bad day when you head out in your little four-metre tinnie with one bag of pillies, a couple of berleys, two $10 handlines and smash some nice fish on half a tank of gas... that’s what we call an epic day out on the water! 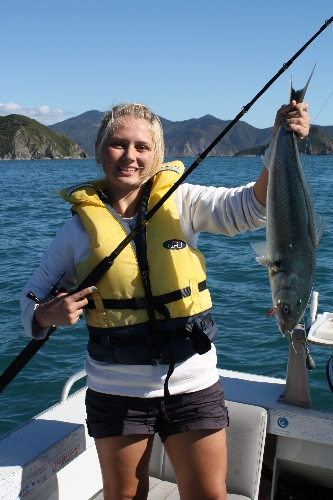