Targeting Atlantic bluefin tuna is an addiction, writes Tony Orton. With fish getting over the 500kg mark, they are one of the most exciting and testing species to fight on the planet. Tony Orton shares a few of his favourite bluefin stories, as well as a few tips on how to target them.

The Atlantic bluefin tuna’s current All Tackle World Record is a massive 678.58kg, making this the world’s largest tuna species. I have talked with captains and crews in this area first-hand about captures that would have easily eclipsed this record but could not be landed due to the regulations placed on fishermen in Canadian waters.

On a daily basis, you get to see multiple fish feeding boat side in excess of 300kg. It’s a sight you never tire of and to see a giant tuna come out of the water and explode on a livebait hung from a kite is something that will never leave your memory bank. Most of the fishing is done with livebaits or dead herring by either chumming and dropping baits down the chum trail or suspending livebaits that look very much like our slimy mackerel on the kite. We have also caught them trolling large squid bars with a stinger hook on the rear of a spreader bar.

I have been going to Canada to chase these monsters since 2012, and I have lost count of how many of these XXL tuna I have personally caught. During this time, 100’s of these incredible fish have been caught on trips I’ve guided. I have seen grown men cry and even vomit from pain, scream like children at the sight of a monster tuna feeding boat side and break down with watery eyes and emotion after landing what could possibly be the holy grail of the tuna species. After one trip to PEI in which I would have leadered over 25 giants, my hands were that beat up and crushed, it took over a month before I got the feeling back in the tops of my hands.

The giant Atlantic bluefin tuna is a fish that will test your rod, reel, terminal tackle, technique, stamina and your mental strength to the max. When you’re fighting one of these tuna, there are no places to hide, no short cuts and it will hurt. PEI is a graveyard for tackle and anglers’ egos, without a doubt! The Hoare family celebrating and getting ready to release another nice Prince Edward Island bluefin.

What has made this fishing experience even more special is we have fished with the same father and son team for the last eight years. Greg Norton and his son Spencer both run tuna boats out of PEI. They are regarded as the best on the island and usually tag the most fish each season. Both father and son have a whacky sense of humour, tell you how it is, are highly competitive and true masters at their game. These guys know how to target and catch giant tuna, averaging 2-3 each day. The youngest Norton boy, Koen, caught the Small Fry World Record at age ten with a stunning 384.50kg bluefin tuna, and this record still stands today. A fish of this size would be an incredible capture for a super fit adult, let alone a ten-year-old boy.

Over the years, there has been one thing that has really stood out for me as a fisherman: the family approach the Nortons have taken. It’s a special fishery, and to be able to go out on the water with your children and get them involved in such an incredibly visual fishing experience makes it even more special. The Shaw boys watching the old man put some heat on a giant.

My boy Sami has joined me for many days on the water in PEI. He has stood beside both Bea and me at our weakest moments when we have been fighting giants, he has watched his old man panting and groaning when wiring a cow sized tuna and has joined in on the celebrations and failures. Sami has even witnessed first-hand the commercial process of a giant tuna being caught, killed, bled, pulled over the side and then processed to the highest standard, before finally being packaged up ready for export. These are life lessons that will follow him through life.

I remember one day after we caught our limit of three tuna very early in the day, Captain Greg took us back to the feed and chummed up so Sami could experience for himself what the anglers had been through. That afternoon we had 350-400kg fish feeding right along the boat. At age three, Sami was way too small to fight a tuna of this size, but he wanted to be part of the team, so he armed himself with his little kids bait rod and we started tying mackerel onto the 4kg line and pitching them to the feeding tuna. He was getting bites and first runs out of these monsters, and it was all happening right in front of his eyes. I still remember Capt. Greg turning to me after a 400kg bluefin piled onto Sami’s bait and started ripping out line. He looked me in the eye and said, “Well Tony, we have just ruined your son. He is going to be hooked now for life and nothing else will matter.” That afternoon, you could not wipe the smile off Sami’s face and that three-year-old walked around for days like he was part of the team. It’s a memory that will last forever and it showed the true mentality of a man like Greg who kept going instead of finishing the day early – a true family man. Being part of a Canadian bluefin commercial kill provided a rare and valuable father and son moment for the writer.

Every year, these massive tuna come into areas like the Gulf of St Lawrence in Canada and other areas like Cape Cod and Massachusetts Bay in the USA to gorge themselves on the massive schools of herring and mackerel which spawn in late summer/autumn (July to November). The bluefin pack on so much condition during this period, they look like round barrels by the time they’re ready for their long swim to spawning areas like the Gulf of Mexico, some 1600 nautical miles away.

The feeding and migration patterns of the Atlantic bluefin have been well documented and researched over the years, making it very easy to predict where they will be feeding. With modern commercial and even recreational fishing methods, tight areas like the Gulf of St Lawrence and the Mediterranean could easily be fished to a point where we could see a collapse in bluefin numbers. Canada has witnessed major collapses in their fish stocks before (cod and herring) and now has a world-leading and aggressive management plan in place to monitor and protect fish in their waters. If you have a commercial tuna license (only so many in circulation), then you can fish for Atlantic bluefin but only under some very strict rules. Depending on what fish stocks are like, you may get 1-2 kill tags per season. The captain with the license has to be on the boat and it’s monitored the day you go to kill a fish.

If you have a tuna license, your vessel is surveyed for passengers and you do a tuna release best practice course, you can then run a charter. Depending on the year, you may be able to catch and release 2-3 per day. You must only use 60kg plus line and barbless circle hooks, and fights cannot go for more than two hours. Once caught, fish must be towed and fully revived before they are released.

While fishing with the Nortons over the years, we have released hundreds of bluefin tuna. All fish have had tags put in them and we have also been part of satellite tagging programs to prove the released bluefin are surviving. This system also tracks vital data, helping us understand where and how deep they go, and at what water temps etc. More recently, we have been putting acoustic tags in some of the tuna we have caught. The research boat follows us when we are reviving the fish, then once we release it, the research boat follows the tuna as they can get a signal off the tag. Over the next few months, the researchers can get data off the buoys and markers that have acoustic receivers on them, and they can track where the fish has gone and when it leaves the gulf (some have even come back in to feed again). This data has been vital and it also proves that with careful release technique, these fish will survive. Every fish we have deployed an acoustic tag on has survived. Two seasons ago we caught a fish that had a conventional tag in it. Once the data came back, it showed we caught the same fish in the same area the year before.

We have taken many anglers to PEI to fulfil their dream of catching a giant tuna. The Norton family have been a huge part of this, and in the process, we have also gathered new data which will help protect these truly amazing fish. 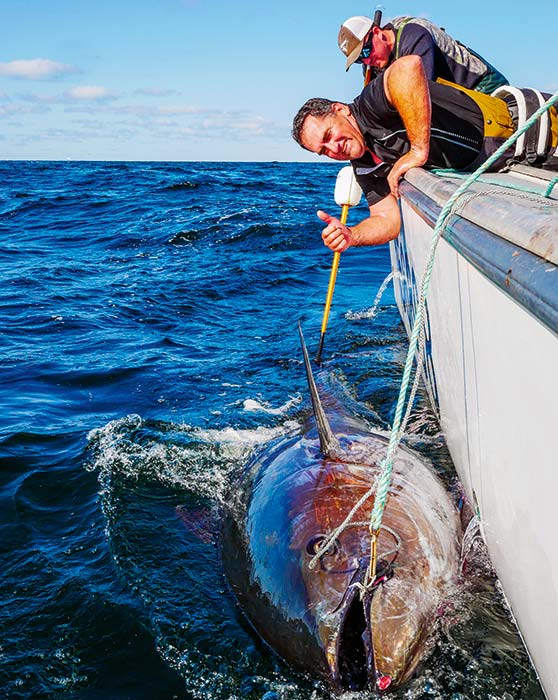 Glenn Shaw with his trophy tuna.

It excites me that my boy has seen this fishery at its best and nothing makes me happier than watching other parents doing the same adventure with their children (most are too old to be called children). These are memories that will last forever and with the work the Canadians are doing, hopefully the fishery will last just as long.

Due to COVID-19, we will sadly not be able to make the journey this year, so instead, we’ve taken the time to reflect on this magnificent fishery. 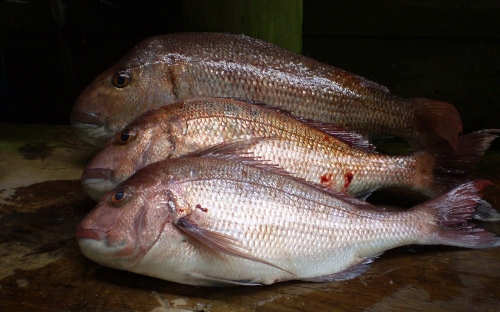 rough day out in the local pub comp - maori rock