I have written about surf casting, and the way it has evolved over the years, before.

Even in my lifetime, we have gone through several materials for making rods and reels. My first surf rod was a hand-medown one-piece cane rod with a permanent fish-catching bend from the middle to the tip. If I wound it up too much during a cast it was quite capable of throwing me onto my back on the ground. It was matched up with a wooden-spooled Alvey reel and together we caught a few fish and had some of the biggest tangles in the history of fishing. It was a start though.

I guess I came into surfcasting at just the right time, when fixedspool reels were starting to take over the role previously held by overhead boat reels that were generally poor casters.

I started out with a Roddy reel (Roddy eventually became Daiwa). With that, I was able to cast 50 metres and actually get amongst the fish at the Ngaruroro River mouth where kahawai were thick all summer, as well as fish the beaches where the snapper were – Awatoto and Westshore.

It was a magical time when I could get up early in the morning, get on the beach at daylight, and be pretty sure that I would catch a snapper or two. They weren’t all 20-pounders in those days, but rather similar fish to those we catch these days in the one-to-threekilo size.

I could never understand why most surfcasters used such heavy line. I guessed that it was because they expected to catch very heavy fish, but very heavy fish were few and far between. I didn’t catch one over 20 pounds for several years and then didn’t catch another that size for another 20 years.

I soon realised that putting a lighter line on my reel meant I was able to cast further due to the lack of friction as the line came off the spool. It was also obvious, to me anyway, that heavy line wasn’t required to land big fish in shallow water. The light line with it’s finer diameter, allowed for more capacity on the spool. I wasn’t scared of any fish that picked up my bait on my local beaches.

Fibreglass rods came on the scene. These were solid glass beasts that weighed a ton, had really slow actions and were difficult to cast. Some national casting champ tried one, though, and cast a good distance, so everyone had to have one. I did, for a year or two, and never got to like it, although it did catch some good fish in that time.

The arrival of hollow glass rods on the scene in the late 1960s and the early 1970s was the greatest thing that happened to New Zealand surfcasting. It made casting decent distances easy and the lightweight rod meant you could fish all day.

Development after this introduction was slow, but the wheels of progress ground on inexorably. Rod builders realised that hollow glass incorporated with the new carbon fibre materials had to be the future of fishing. It didn’t happen quickly, and some terrible rods went on the market as the rod builders experimented with different compositions. Given time, however, and we were slowly introduced to composite rods of graphite and glass that were world-class. In fact, New Zealand rod builders were selling their products on the world market.

At fishing grassroots level, anglers were thrilled with new technology that allowed them longer casts using lighter rods. Over the next 30 years, there would be a refining of rod shapes and actions, but it seemed that research into rod materials was at a standstill. That didn’t much worry anglers who were still coming to grips with some dynamic rod shapes that blasted sinkers out to distances they had never been able to achieve before.

Then came the introduction of ‘nano-fibres’ to fishing rod manufacturing. Overseas trends were heading in that direction and it became the next step here too.

Nano rods took over the top end of the surf casting and lighter boat fishing rod market. The introduction of nano technology meant that rods had greater integrity and were less vulnerable to crushing. They were also even lighter.

So where to from here? Every step seems like it could be the last, as we master the manufacturing process using new materials and work out how to extract the best from the products available.

Other rod building materials like boron have come and gone for various reasons, with expense being a major factor. What else is out there, ready to move from the aerospace industry to the recreational fishing market? Think back, if you can, to cane, greenheart, and split-cane rods and you will appreciate the developments of the last 60 years.

Reels seemed to be heading in the same way. New body materials, like carbon fibre, made reels lighter, but often at the expense of strength and the reel’s ability to withstand the struggles of a big fish. Reel manufacturing has evolved from machined metal to lighter, cheaper cast alloys, then various grades of plastics and in recent years to precision all-metal bodies. Weight, while not as critical in reels, still deserves some consideration when choosing the one for your style of fishing. Alloy-bodied reels are great for most fishing, but the lighter ones may have torque problems if used with heavier lines or to fish for bigger fish. On the other hand, they are the ideal companion for a light (up to 8kg) stray-lining set or soft-baiting combo where you’d expect to make a lot of casts during a day of fishing. Some of the better-quality alloy-bodied reels make the best surfcasting reels. The message: no one reel will do all the jobs a fisher may ask of it during a day out.

Body shapes and features have been a great selling point for reels over the years, but basically, they remain the same. Highspeed reels for pelagic spinning and others with slower retrieves and low-down grunt for fishing down deep or in heavy currents are worlds apart, but at a glance, you may not pick the difference. Spool shapes, braid ability, line laying characteristics and capacity are always worth considering and should depend on the types of fishing you do.

I wonder what new materials will be introduced for rods and reels in years to come. If I had written this 30 years ago, I guess my story would have ended the same way. 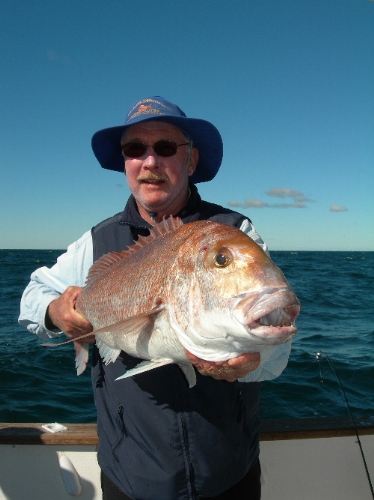 Razzor and a SP snapper from DIVERSITY - middle gulf