Trout will strike a fishing lure for several reasons: they think it is food; they bite due to aggression; they attack in self-defence; mouth it through curiosity; chase due to territorial behaviour; or sometimes get hooked by plain mistake. And, of course, they will also strike as an immediate reaction to something landing near them – what I call the ‘reaction strike’.

Over the years I have become more aware that trout quite often ‘reaction strike’ spinners which suddenly drop on them from above. These savage hits are immediate: a direct response to a food item suddenly appearing in close proximity to them. It is an inherited hunting reaction rather than a measured strategy, and such whacks really raise the blood pressure of the angler on the other end.

This method of fishing is quite different to my normal style. Usually, when fishing rivers and lakes I will cast beyond where I think a trout will be and work the spinner back past his nose. Usually the trout is unsighted so casts vary from short to long, from parallel to the shore to straight out, and at different speeds and depths.

Trying to incite a reaction strike requires a different approach. It means imitating a bug slapping down on the water extremely close to a feeding fish. When using this method, I target splashy rises, swirls or sighted surface feeding fish. I deliberately try to drop the spinner right alongside the bullseye of the eating action, and will only ever use spinners.

The best locations to use this technique are slow-flowing rivers or streams where the water is of moderate clarity. The fish spotted is already feeding, so when my mana from heaven splashes down beside it, it will react immediately. This method works best on big fish which are not spooked by a splash near them since they are apex predators. 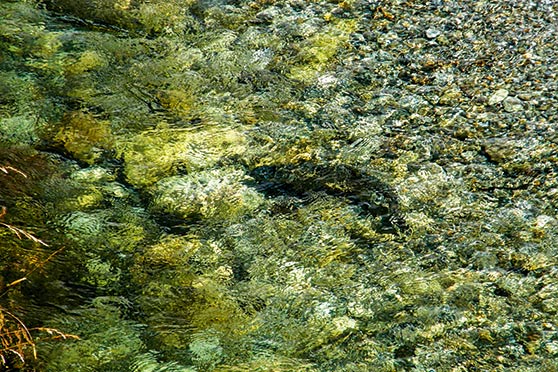 A good trout spotted and ready to be cast at.

I first tried this technique many years back when fishing a tributary of the Tekapo River in the Mackenzie Country. I was having a tough day on the water. My usual casting method was not producing the goods, as the fish I observed were rising, rather than eating sub-surface. It was frustrating because the fly rod was back at home. I persevered and when I saw a good rise right against the far bank, I cast upstream to swing my spinner past him. Well, I at least tried to cast upstream but I got things wrong and it landed right on top of his dissipating rise. One turn of the handle and bang, I was hooked up to a good brown. He was my only trout of the day: one I put down to a fluke incident. I then went back to my original fishing habits.

Soon after, I found myself in a similar fishless situation at Mathias Dam in the Maniototo. Same problem: rising fish, no fly rod and cast and retrieve was not working. Then a long cast saw my spinner land exactly on the water where a trout rose. I did not even get to turn the handle before the startled trout grabbed the sinking spinner and went ballistic. He, too, was my only trout of the day. Another fluke I thought, but over the years more fish followed in similar circumstances, and it quickly became a tactic I kept up my sleeve for the hard days.

The best fish I have hooked as the result of a reaction strike was just this year. I was working my way upstream on the Taieri River when I came across a big backwater located on a bend. The river level was down a bit so the fields behind the pool were just oozing water into it. Right where most of the water entered, a big nose was regularly sipping bugs off the surface. The pool was about thirty metres across.

I was spin fishing so options were limited. I thought an accurate cast past him might interest him on the retrieve. Nothing ventured, nothing gained. I whistled out my spinner but slightly skewed it. It landed smack alongside the rising trout. I began to retrieve when suddenly a huge bow wave erupted from weeds behind the spinner and the rod tip yanked down. He must have thought a fat, green bug had splashed down just for him.

The reel screamed as he rocketed across the pool heading for trees on my side. I tried desperately to turn him but all this did was make him jump in protest. It was a very big trout, well over three kilos, and I can still picture his size today. Sadly, there was no happy ending as my line was dragged into the trees and snapped. It is definitely ‘the one that got away’ for 2020.

A few weeks after that big-trout episode, I was back on the same river. Rounding a corner, I saw a trout rise at the tail of a pool. A flick of the spinner saw it land near him and he smashed it. He was well-hooked and looked about 1.5kg, but when he jumped, the line snapped at the spinner – a weak knot probably. Trout that reaction strike do go ballistic, so losing some is inevitable. Maybe the surprise of finding themselves hooked instead of happily munching a wayward insect is transmitted into raw energy. Big, feeding trout also tend to be strong and well-conditioned. Real fighters. 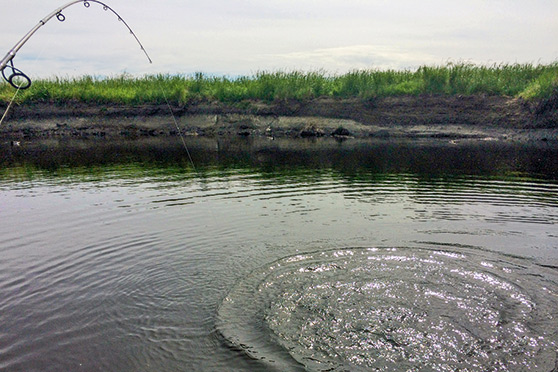 Hooked up to a solid trout - fish that have "reaction struck" always fight hard!

In the next pool, I spotted another rise near a weed line. I had now retied with a red/gold Panther Martin and cast it slightly in front of the rise. Two winds of the handle and, bang! My spinner was nailed. It was a solid trout and rather than jump he swirled on the surface and hugged the bottom. With the lost fish on my mind, I expected disaster, but this time I was the winner and brought him to the net. The blood leaking from his gills sealed his fate – the 2.5kg trout would be coming home with me as fillets. The 2.5kg brown trout that couldn't resist striking the spinner which landed right next to him.

Over the years, this method has proven a reliable one on the hard days. A close-cast lure will annoy, surprise, or maybe even scare a trout, but in all cases you will get a reaction – and isn’t that what you want? 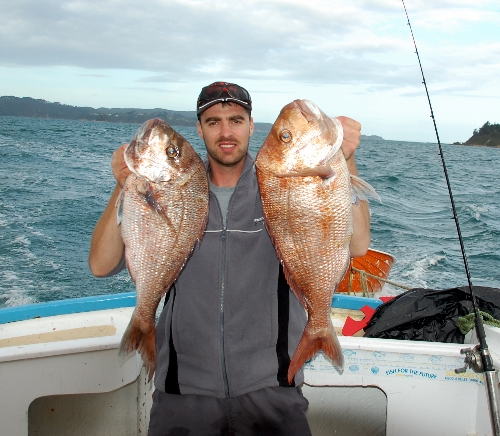 a great day with the softies - hauraki gulf