The scientists must have run out of inspiration when it came to naming the species featured in this issue. The ‘bluefish’ is indeed a blue coloured fish, and is one of the three species of nibblers found in New Zealand waters, including the more commonly encountered parore (Girella tricuspidata). This distinctive bright blue species can be encountered all year round in New Zealand in small schools or as solitary fish in shallow water.

Bluefish are distributed throughout the sub-tropical Pacific and Tasman from Brisbane to Wellington. Within New Zealand bluefish are most common on the eastern coasts between North Cape and the Bay of Plenty, as well as around offshore islands; however, sporadic sightings also occur along north-western New Zealand and one individual was even found as far south as Wellington. Outside of New Zealand they are common around Middleton Reef, Lord Howe and Norfolk Islands, and are also found at the Rangitahua/Kermadec Islands. Within their native range, bluefish generally inhabit shallow rocky reefs down to about 10m depth and in New Zealand are more common at offshore islands. Bluefish are omnivorous; they will often be seen grazing algae or invertebrates off the rocks but will also eat salps in the water column when they are plentiful. Research suggests that bluefish were traditionally herbivores but have started eating higher energy animal material to supplement their low nutrient algal diet. You are most likely to see them feeding at dawn and dusk when they are most active.

So, you caught a blue fish when chasing snapper in the shallows or noticed a blue fish during a free dive – how do you know if this blue fish is indeed a ‘bluefish’? Firstly, bluefish are large; they can grow to 76cm in length and have bright golden spots on their flanks. Smaller fish are a greeny-grey colour with paler yellow spots. They have a small beak-like mouth and large scales and are typically not scared of divers; however, juveniles can be a bit shyer. Bluefish of every life stage have been recorded in New Zealand, but it is still not known if this species breeds in New Zealand waters or if larvae are arriving from offshore populations. 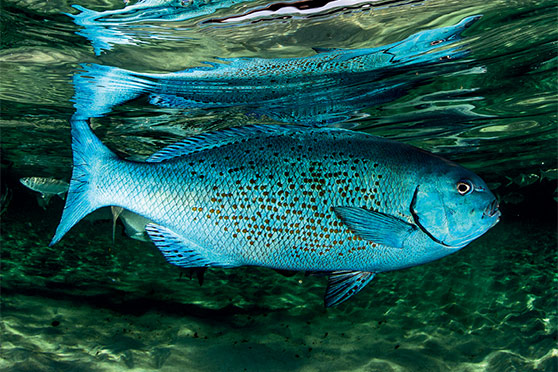 Scientists believe that the recruitment of bluefish in New Zealand may be very sporadic and numbers will fluctuate year-to-year; however, overall it seems bluefish numbers have decreased in New Zealand recently. Historic anecdotal reports describe large schools of 50-100 bluefish, similar to the schools of parore that are still encountered nowadays. Bluefish in these numbers are no longer seen in New Zealand, or Australia for that matter. In parts of Australia bluefish numbers have dropped so much they are now fully protected in some states.

To help us track changes to bluefish populations in New Zealand we are interested to hear about sightings of bluefish in nearshore coastal areas, the west coast of New Zealand and south of East Cape. Bluefish are likely long-lived species and sightings in known locations (i.e. offshore islands like the Poor Knights) may just be a case of the same fish being re-sighted multiple times. However, sightings outside of the known range may suggest bluefish populations are recovering or spreading to new areas. So if you think you have spotted or caught bluefish in any of the areas listed above, send a photograph to WhatsThatFishNZ. We are also particularly interested in photos of small juveniles! 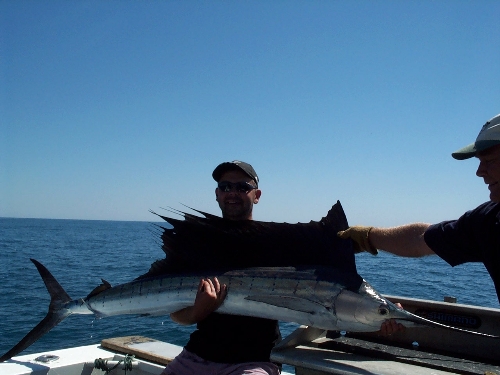