Trends in fishing are always interesting and keeping up to date with what is going on with tackle and techniques is a great way to open up new angling opportunities. Adam Clancey suggests being able to pick up on a trend and develop it for your fishing scenarios is a skill in itself.

Recently, I have noticed that NZ anglers are adapting styles of fishing which are popular overseas to suit our fish species. One of these techniques is basically a version of ultralight fishing, which had a strong following here in the 80s and 90s. Anglers would put their skills to the test by using very light line, such as 1-2kg breaking strain, for smaller species, and slightly heavier for larger fish (right up to marlin). While ultralight fishing had its fans, some anglers thought that playing fish for extended periods and regularly busting off was unsporting. The new trend of ultralight fishing, however, differs from the old school ‘ultra-light’ approach for several reasons.

One of the techniques is known as ‘ajing’ which has its origins in Japan where aji is the name for horse mackerel or what we commonly call yellowtail – a fish prized for its eating qualities there. Ajing-style fishing is practiced with very light, high-quality graphite rods, size 1000-2000 fishing reels and super fine braid or polyester lines. Using this tackle, anglers deploy ultralight jigheads from 0.5 up to 8g and micro soft-baits in pink, white, yellow clear and lumo colours. Sometimes, micro jigs and slow jigs in very light weights are used as well. Leaders are fluorocarbon from 6-12lb. Quality guides and rods are a must. Make sure they are suitable for casting very light jigs.

So why would you want to use a technique like this when a set of bait flies will usually do the trick when it comes to catching yellowtail? There are times when baitfish become very picky and using this style of tackle will produce when other techniques fail. It is quite common to fish with micro jigs for koheru when looking for livebait for gamefish. Having tackle that suits this style of lure is a big plus. Other target species in the mix include koheru, slimey mackerel and other baitfish, which are all great sport on this tackle. 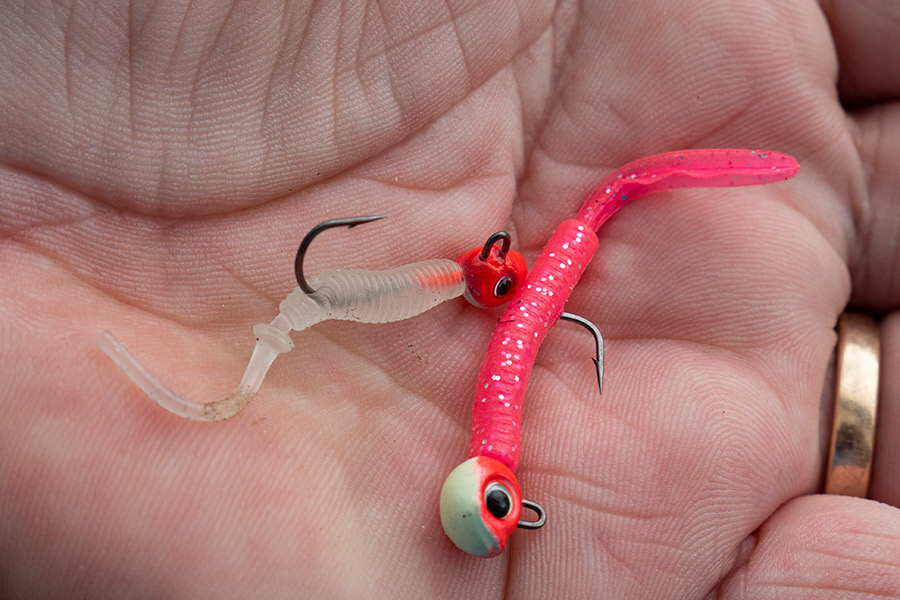 These micro soft-baits may be small, but they will still get monstered by big fish.

The key to success is keeping the whole rig as fine as possible. Thin braid and leader allow the small lures to cut through the water very easily, even in relatively deep water or strong current. Keeping the rig light also helps with your presentation. If you beef up your braid or leader too much, the lure will not work in an enticing manner because the stiffness of the trace will control the action of the lure or the braid will lift the lure and stop it from sinking naturally. 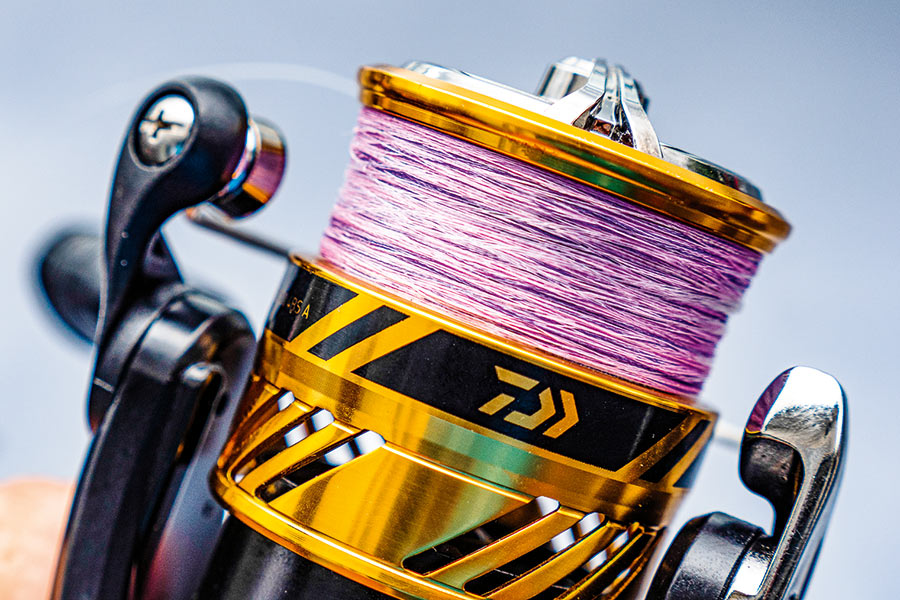 Keep your braid as fine as possible - PE 0.5 is great.

This trend has already been picked up and adapted by trout anglers who are more commonly fishing with light spin gear and soft-baits – and they’ve been catching some amazing fish. The guys who have this system worked out are using 2.5 to 3m plus light rods which can flick a light jig head a long way with ease and accuracy. In the South Island canals famous for their monster trout, casting soft-baits and drifting flies and egg patterns are the most popular techniques. While the trout anglers keep most of their gear ultralight, the weight of braid seems to not be as important as its thickness and smoothness for casting. 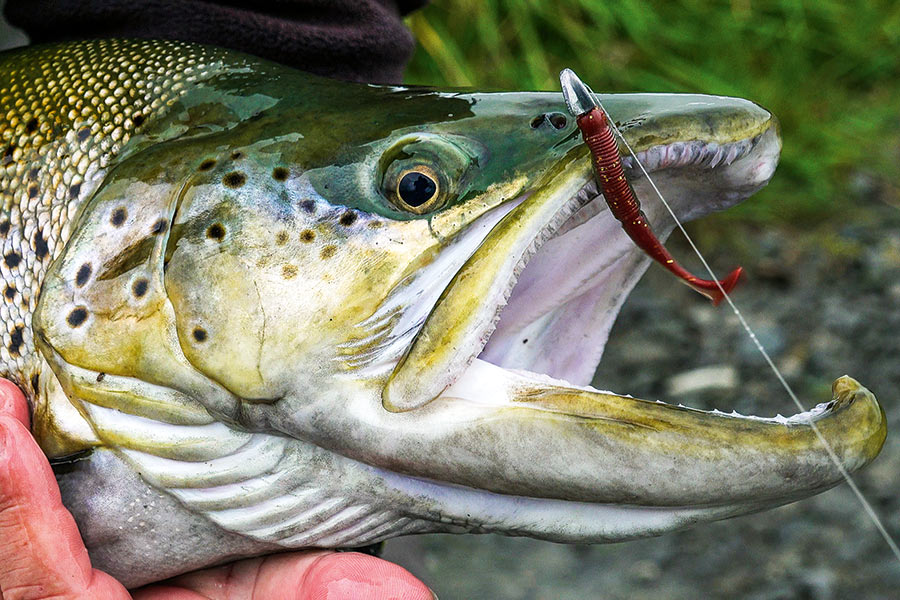 Big trout are a prime candidate for scaled down soft-bait gear.

Ultralight trout fishing is also practiced a lot in rivers. An upstream casting technique is used, along with a retrieve designed to bring the lure past a trout’s feeding lane. Many spin fishers tend to fish across and down a river in a more traditional way. In lakes where there’s a drop-off or a stream enters the lake, fishing small soft-baits with a slow to medium retrieve is the go-to technique.

Lure colour seems quite important. Ultralight trout fishing with light and dark natural colours like green and brown are the go, especially for brown trout. Jighead weight is super critical as the lure must not sink too quickly but also have strong enough hooks to hold large trout. Many light jigheads bend even under the stress of ultralight gear, so be discerning with your choices. 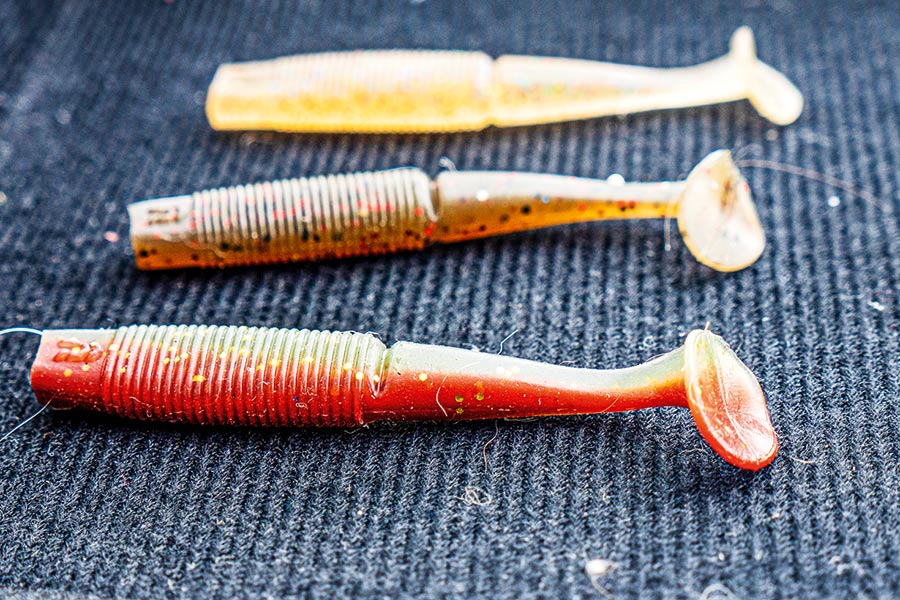 In Australia, this trend has already taken hold with popular inshore species like bream, whiting and flathead, to the extent that they have a tournament circuit based around the bream fishery. This fishery has developed to encompass specialist lures, terminal tackle and even boats and marine electronics. In the United Kingdom, similar techniques are being used under the term LRF or ‘light rock fishing’ to target a whole variety of species. Similar things have happened in Singapore, where they target everything from reef fish to highly prized trevally species, with a lot of anglers fishing landbased from rocks and jetties.

Other species can be targeted using an ultralight technique with modern tackle and one thing that will undoubtedly happen is that fish larger than expected will be hooked. The standard target species are schooling snapper, trevally, gurnard, kahawai and the likes. It is also likely that less common captures will increase like tasty red mullet or flounder because of the smaller lures and more subtle approach.

The larger fish you will hook, such as big trevally, snapper and kingfish, will still be able to be handled due to the strength of fine braid and the quality of your hooks, fluorocarbon leader and reels. The only real limitation is line capacity on the small reels. That is all part of the challenge, I suppose.

The fishing technique for sea fishing depends on the species. Anything from a slow twitch through to a jigging style action for more active sub surface feeders will get results. There will be those anglers who investigate the finesse side of ultralight fishing and appreciate it as an opportunity to enhance the fishing experience. Others may just think, “Why does anyone bother?” The answer to this question is simple: if a technique gets a fish to bite in a tough situation, it must be a plus. Think back to the days when using a lump of lead and a piece of bait while anchored was the go-to technique. Now think about how you fish today. Is it a thing? I think you will see a trend towards this style of fishing. It won’t replace existing techniques, but it will add another arrow in your fishing quiver which can be pulled out in the right situation.

It will be developed by innovative Kiwi anglers to suit the needs of their fishing, adding a new dimension to one of New Zealand’s most popular pastimes. 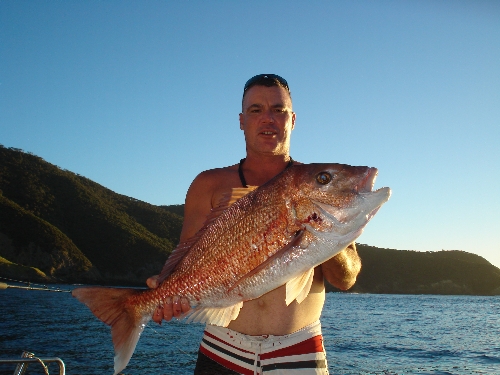