A Year to Remember

Young Auckland angler Jackson Baker (16) has been fishing since he was able to walk, but nothing could have prepared him for the blast that was his 2019 fishing year. He ticked off species and locations many anglers can only dream about and will never experience in a lifetime…

On January 5 we set off on Dad’s 2500 Rayglass Bite Time in search of an early season marlin out of Tutukaka. Mid-morning, we saw saury jumping and we got a double strike from the marlin that had been feeding on them. One feisty little stripey stuck to an original Kilwell Pacific Baitfish Fruit Salad run off the short corner. After a short fight I tagged and released a striped marlin of about 80kg! 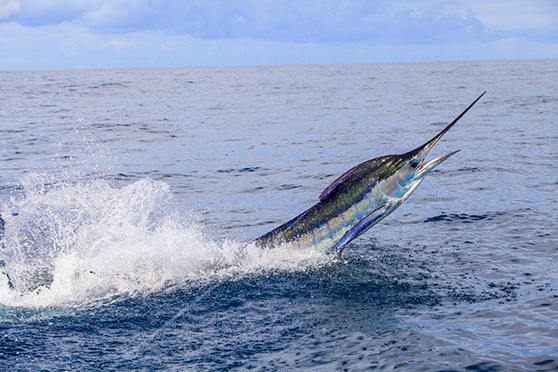 The writer started 2019 the right way, catching his first stripy on January 5.

Later in the afternoon, about a mile away from where we got the stripey, a good blue marlin came out of nowhere and smashed the Redgill RG8 Nathan’s Special on the long rigger. Later at the weigh station it went 177.4kg, and is now the Whangarei Deep Sea Anglers Club record for a junior on 24kg line. Wow, a dream start to the 2018-19 season.

A couple of days after this, Richard Harvey and Anthony Schomaker kindly took me out to North Reef for an evening fish on Richard’s boat. We had a crazy topwater session with packs of big kingfish chasing flying fish. Whole schools of flying fish were showering out of the water and the bow waves of big green backs were close behind. It was absolute carnage, and there I was armed only with a light setup! We didn’t land many. That night I did six casts, lost five lures and caught one fish. Finally! At 20kg, it was my first decent-sized kingfish capture after trying to catch one on topwater for a very long time.

I also topped my summer holiday off with a once in a lifetime opportunity to cast a stickbait at a broadbill swordfish tailing on the surface out the back of the Knights. Unfortunately, it wasn’t interested – maybe for the best, as I only had a 6000-size reel with 30lb braid!

In May, we did a trip to the legendary Wanganella Bank on November Rain, a 56ft Malcolm Tennant sportfishing catamaran owned by Garry Somers. At 10:30am on our third day of travelling, we were greeted at the Wanganella Banks by flat calm seas, flocks of birds leading us to packs of big hungry striped marlin and dolphins chasing bait balls of redbait swimming unsuccessfully for their lives.

What followed was a day of mayhem: triple and quadruple hook-ups, giant meatballs and packs of hungry marlin, clearly marked by the big groups of shearwaters and albatrosses. We ended up on 22 marlin for the day, with five for myself and one on a stickbait for Mike Greaves, and that was only a half day!

The next morning, we realised the fish were feeding differently; they were swiping at the lures with their bills rather than eating them properly. This is where I feel we may have done better if we’d had some pitch baits. We had strike after strike after strike, but only managed to get 11 for the day.

The next day brought more insane meatball action, and we spent a lot of time trying to get some on topwater, but they were focused on the balls of red bait so we went back to trolling and had another action-packed day, finishing with 17 fish.

On our last day at the banks everything quietened down a bit (I say “quiet”, but we got 11 marlin – still an awesome day!). I sat up in the tuna tower, and got to see some of the most awesome sights I’ve ever witnessed – meatballs right next to the boat and the lit up blue pectoral fins of marlin, as well as the white bellies of the dolphins herding them.

We ended up on 61 marlin for the trip, with 60 of those being released. We estimate our average size for the trip to be around 120-130kg and some of the biggest could have gone 180kg+. A big thank you to Garry Somers for taking us on such a cool trip. In July I went down to Waihau Bay with Dad and his mate Jarrad, and I was deckie for the capture of Jarrad’s 96kg southern bluefin tuna that came out of a double strike.

A week later, I headed back down with friends Toni and Robbie on Robbie’s boat Blazer. We had a double strike from southern bluefin, landing both. I was lucky to be an angler and after a hard fought 40-minute fight on 24kg line, landed my first bluefin at 67kg gutted and gilled.

Once spring came around, the pilchard workups in the Hauraki Gulf went mental. Hundreds of gannets bombed into the water, dolphins, whales, kingfish and kahawai rounded up the bait schools and hungry snapper fed on the scraps beneath.

Typically, I like to use Sliders and other kabura-style lures, but this year I really got into micro jigging. Using kabura-style lures is really easy and effective, but I enjoyed the extra challenge of catching fish on a micro jig. Armed with my Ocean Angler 60g bruised banana knife jig, I caught many kingfish up to around 12kg, and more importantly, some good-sized snapper, with quite a few over 15lb, the biggest just shy of the 20lb mark. In October we had a family trip to Vanuatu, but of course I had to take a rod or two (or maybe seven) and get a few fish. Before we flew to our main destination for the trip (Aore Island), we did a day’s fishing on Nevagivup, a boat run by Charles Wheeler from Crusoe Fishing Charters. We were targeting yellowfin by trolling poppers but missed a couple before switching methods and catching half a dozen mahimahi to about 12kg, including some on ultralight squid fishing gear – great fun! I also got bitten off by a few wahoo.

We then decided to head inshore to try our luck with dogtooth tuna. The mack tuna were proving elusive and it took half an hour for us to get one for a livebait. The moment the livebait was deployed on the downrigger, it was smashed by a big doggie. I had it on for about 20 seconds and it was just smoking line. I couldn’t stop it getting to the reef and the dog cut me off on the sharp coral. Total time on the video from dropping the bait to commiserations – 42 seconds. Sad!

The next day we flew to Santo, and then had a short ride via boat across to Aore Island. We stayed at a mate’s place where the jetty dropped pretty much straight off into 30m of clear blue water. Fishing was relatively slow here (apparently, we missed the GT run by a month) but over the six days casting from the jetty, I managed to catch coronation trout, coral trout, long tom, scad mackerel and mack tuna. Dad got smoked by what may have been another dogtooth on the heavy casting gear, and I lost a huge bluefin trevally on my light soft-bait rod. Lesson learnt in Vanuatu: everything either has teeth or knows its way to the reef, or both. 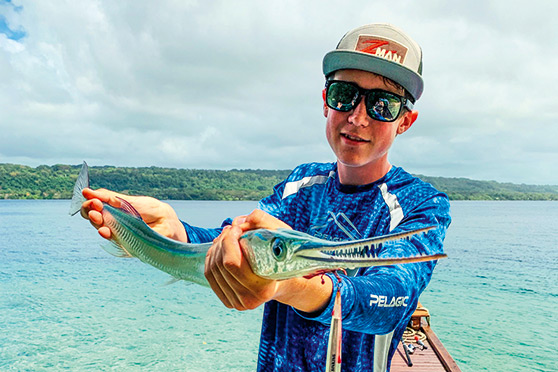 The craziest looking fish the writer has ever caught - a long tom landed in Vanuatu.

Looking back… Damn I’ve been lucky! 2019 was an amazing year, with awesome new fishing friendships made and some good fish caught along the way, as well as the acquisition of the nickname “Chicken Legs”. I could not have done all of this though without the huge amount of support from my friends and family; especially my dad, Richard Baker, and more recently, Ocean Angler, who have sponsored me with some fantastic gear. 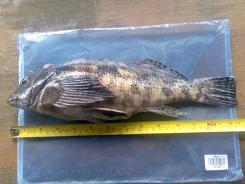