Trevally, in the opinion of Hayden Speed, are one of the hardest fighting fish pound for pound in the ocean. Hayden loves to target trevally and as a bonus, they are an amazing table fish that can be found throughout most of the country.

From sand banks in harbours and estuaries, through to reefs and along beaches, trevally habitat varies widely. These locations will typically hold fish up to 4kg, with a few exceptions here and there. Places like the harbours in the Far North and offshore islands such as the Three Kings and White Island hold some massive trevally, in some cases exceeding 8kg.

Trevally will often be found schooling on the surface. These fish can be very challenging to get a bite from as they are typically zoned in on the tiny krill that they’re feeding on. It can be an incredible sight to see them with their shoulders out of the water as they sip krill off the surface. To entice a bite, try using a very small soft-bait or saltwater fly in black and white.

If you want a challenge and a bit of fun, you can cast this fly into the school using a fly rod or troll it through the school. To improve your chances, try dropping your leader down to 10lb fluorocarbon and test your angling and knot tying skills! If you aren’t successful, don’t be afraid to change lures and leader weights to try entice a bite.

When anchored, berley will dramatically increase your chances of drawing fish into the area. Trevally will often be seen right up your berley trail, which can lead to some epic sight fishing. When the fish are this close to the boat, laying a trail of cubes will often lull them into a false sense of security so they eventually eat a baited hook.

Trevally have relatively small mouths, so smaller hooks around 4/0 or 5/0 are ideal. We will often use a strayline rig with just a single recurve hook tied onto 20-30lb fluorocarbon depending on how much structure is around. We will then add a small ball sinker above the hook as required. Remember, don’t strike with a recurve hook!

Most baits will work for trevally; however, I’ve found squid, skipjack tuna and blue mackerel to be the most effective. Small strip and cube baits are particularly effective. Trevally are also partial to a soft-bait and will often be caught as by-catch when targeting snapper.

Once hooked up, go reasonably easy on them and take your time as they have soft mouths. Too much drag will tear a hole in their mouth, which not only damages them (if you were considering catch and release) but also increases the chance of you pulling the hook. It’s also crucial to lift the fish into the boat with a net, otherwise you risk losing the fish boat side.

Your snapper strayline setup will work just fine when targeting trevally; however, it is loads more fun dropping down to a soft-bait or a light baitcaster setup. Once hooked, trevally have a very distinctive fight, similar to that of a kingfish. They will head straight for the reef before starting to circle side on with rhythmic tail beats which are transmitted through the rod tip as a bouncing motion. 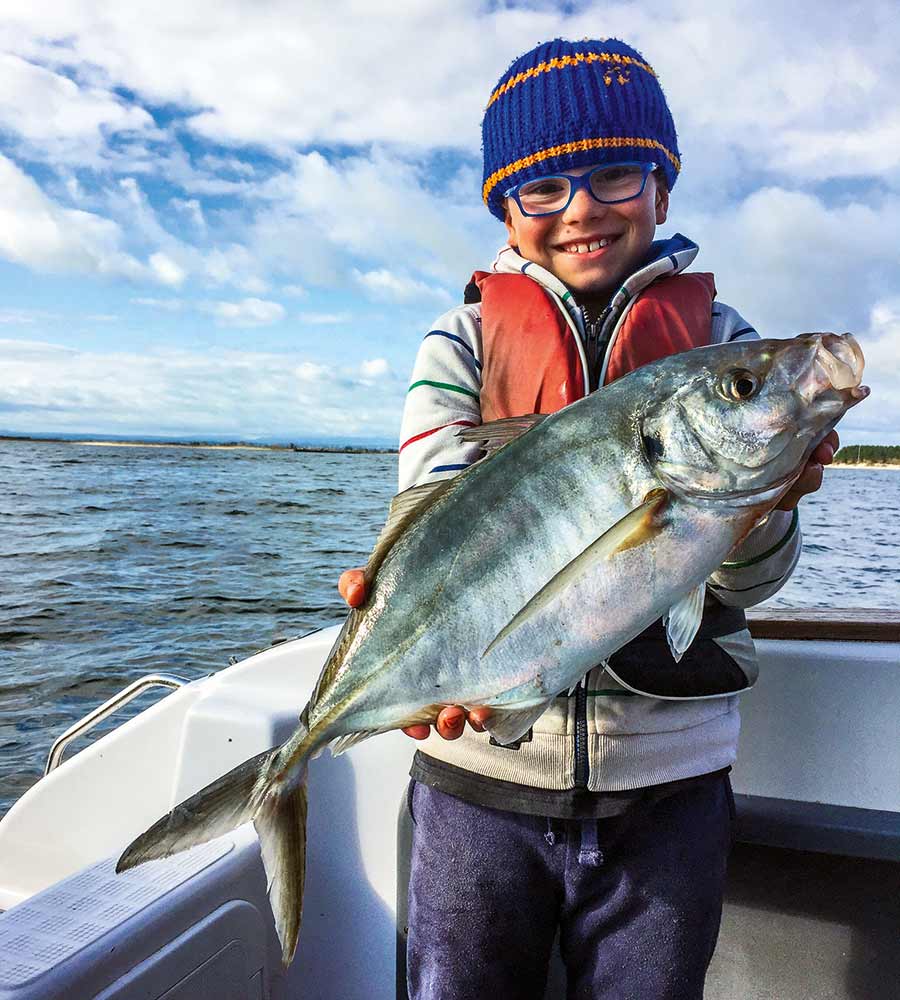 Dropping down and targeting trevally on ultralight line is awesome fun. Tyler with his tasty trevally caught on 3kg line along Papamoa beach.

Trevally are my favourite fish to fillet due to their small scales and firm flesh (after being iced down). The skin can be peeled off by starting at the shoulder of the fillet where there will be a loose flap of skin. This can then be peeled down the fillet, taking the scales off but leaving all of the meat behind. Scan the QR code on the left to see a video of this. 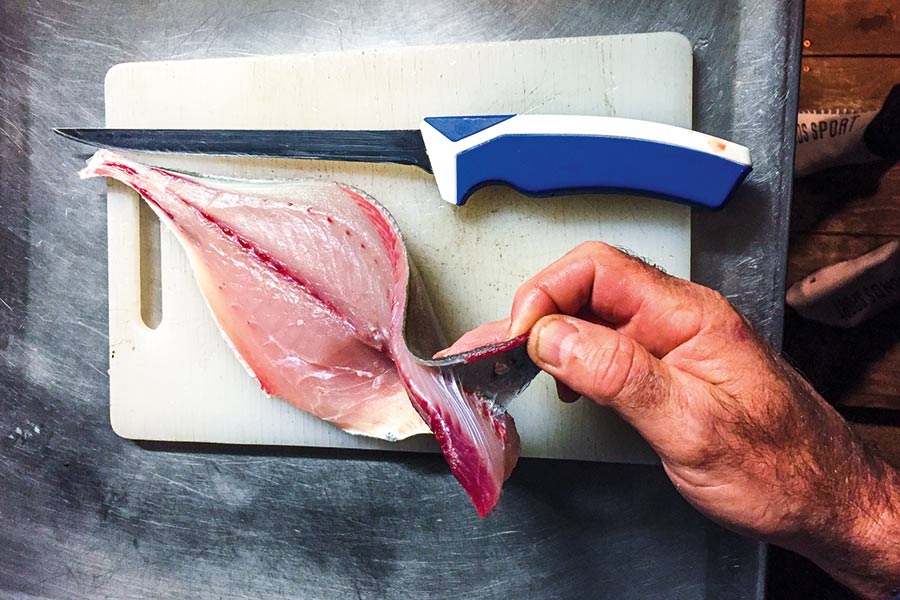 Start by peeling the skin off at the shoulder. 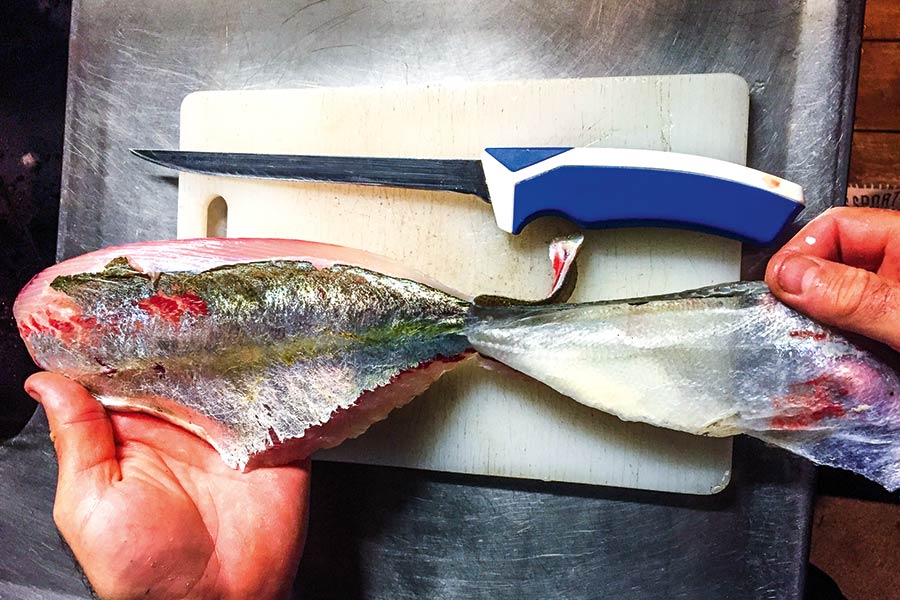 Proceed to peel the skin down the fillet.

Trevally are a very versatile table fish that can be served raw, smoked, fried, crumbed or battered. Bleeding the fish immediately after capture will dramatically improve the eating quality, particularly for sashimi. One last tip: if you are going to eat any fish raw, it pays to trim off red meat (bloodlines) and any silvery fragments of skin. For a dipping sauce, try mixing half a teaspoon of crushed ginger into two tablespoons of high-quality soy sauce – so good! 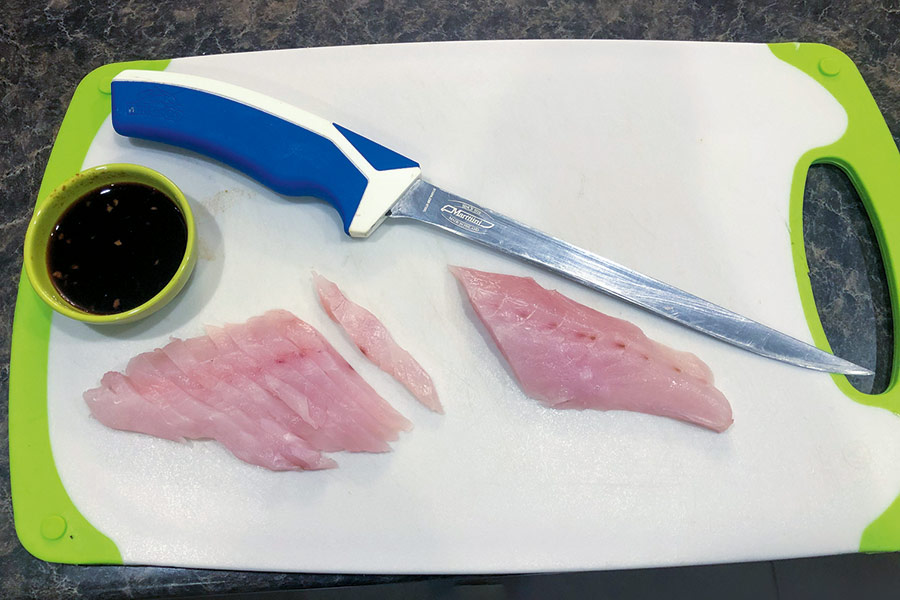 in The Briny Bar
16 minutes ago
shaneg

Read your post Pcj. Some salient points, especially around donâ€™t refund always go out and not coming in.Guess that will get sorted as part of the... in Buy Sell Trade or Exchange
4 hours ago
Apex Predator

I have a part drum of Mercury Premium 2 stroke approx 5-6 litres left.Also a battery that is fine - just needed more CCA for the...

in Fishing Reports
9 hours ago
mackjack

Has anyone been out wide to Mayor recently?Or does anyone know when the bait schools and kings will start coming to the surface out there?Cheers...

in The Briny Bar
13 hours ago
Marligator

in Hints,Tips and How To's
26 hours ago
Reel Deal

minn Kota ulterra 80. Now you mention it I will check speed on gps as not 100% confident. I plan to slow troll livies in a...