Hayden Speed was not particularly looking forward to a South Island family holiday road trip, especially as yellowfin tuna had shown up in his Bay of Plenty home patch, but he was in for a pleasant surprise.

I had little choice but to go along with my family on our Christmas South Island road trip. While I was leaving the yellowfin behind, my plan was still to try and sneak in as much fishing as I could. The travel itinerary was certainly suited to freshwater fishing – although to be fair our freshwater experience firmly put us in the ‘amateur’ category! With a couple of soft-bait rods and one fly rod packed, as well as some lures and ideas borrowed from our northern fishing contacts, we headed off.

Our first stop was Oamaru where we quickly tracked down a local tackle store to get some gear and much-needed advice. We only had half a morning to try to find a fish before we moved on. We selected the Waitaki River as our ‘Spot X’, hoping to track down a trout or a salmon. The river mouth itself was flowing way too fast for us, so we found a little bay just upstream where we could flick some lures and soft-baits around more comfortably. Tyler, my little brother, was first to hook up – a little brown trout which he was excited about. I was next with a small rainbow and a yellow eyed mullet, both caught using a red and silver Veltic spinner. There were signs of bigger fish in the area as well – Tyler and I spotted a large salmon. This created some immediate excitement and panic as we cast lures in its direction. Sadly, though, it was not meant to be – much like the bigger brown trout that spat the hook just as Dad was about to slip it into the net later in the day. That was our time up in Oamaru, but it got our trip off to a great start and it’s definitely somewhere I’d return to. 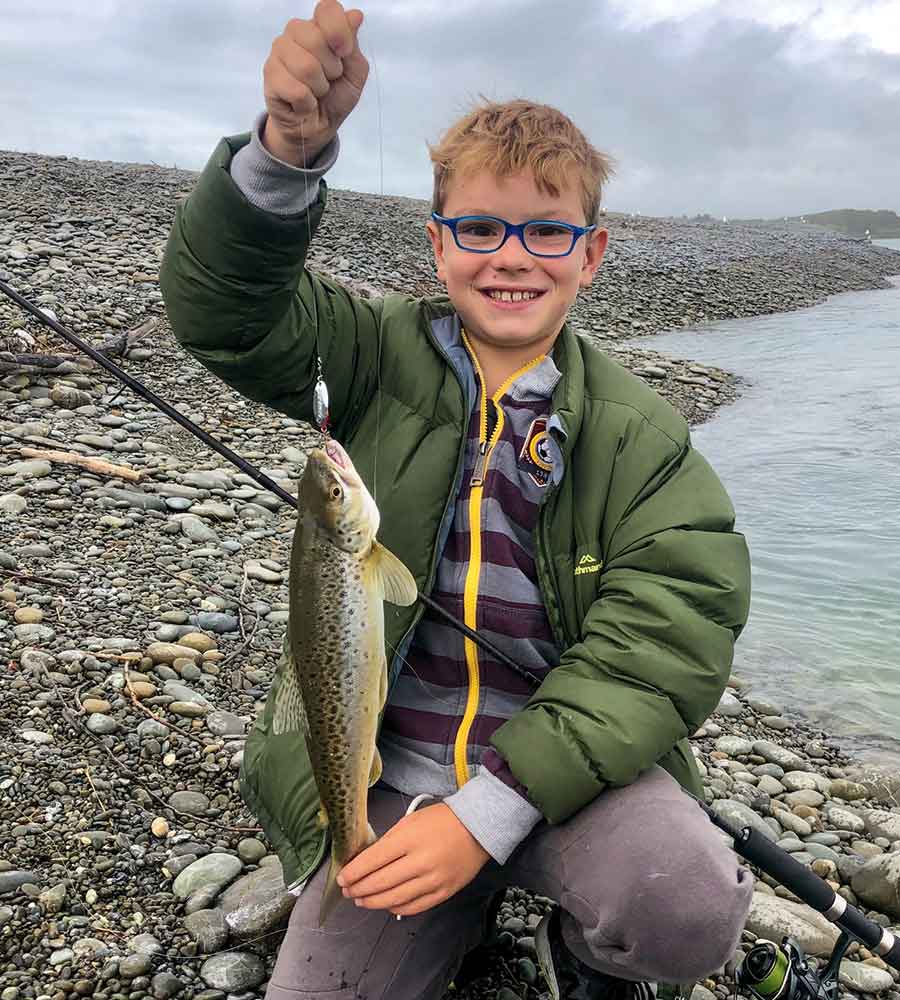 Tyler's brown trout out of the Waitaki River mouth.

The next stop was with one of Dad’s mates in Tapanui. Reed lives near the Pomahaka River where I went for a brief look (but with no success), before going on a quick deer hunt mission. The weather was freezing and foggy, making it almost impossible to stalk a deer. We did spook a few and with a bit of luck we thought we might find them again at first light. The weather the following morning was better, although still bitterly cold and wet – I thought this was meant to be a summer holiday!

Finally, after about three hours of walking the bush line and through scrub we spotted a small group of fallow deer. We edged closer to the brow of a hill where we tried to set up for a shot, but our luck disappeared just about as quick as the fallow did after they too got spooked. I was gutted to have to move on, but it was Christmas Eve and we had to get to Invercargill for a few nights with family.

A little stroke of luck came our way on the morning we were set to depart Invercargill. A weather window opened, allowing a short but productive blue cod expedition out of Bluff with my uncles. The fishing technique was simple, involving only a ledger rig made of heavy trace, 7/0 recurve hooks and eight ounces of lead. It certainly seemed like once you were over some foul ground you could guarantee there would be blue cod nearby, but as soon as you drifted onto the sand there was nothing. The fruits of the trip were a bin full of tasty blue cod in the small to medium size category, and a happy Mum who was stoked when we returned home with lunch. 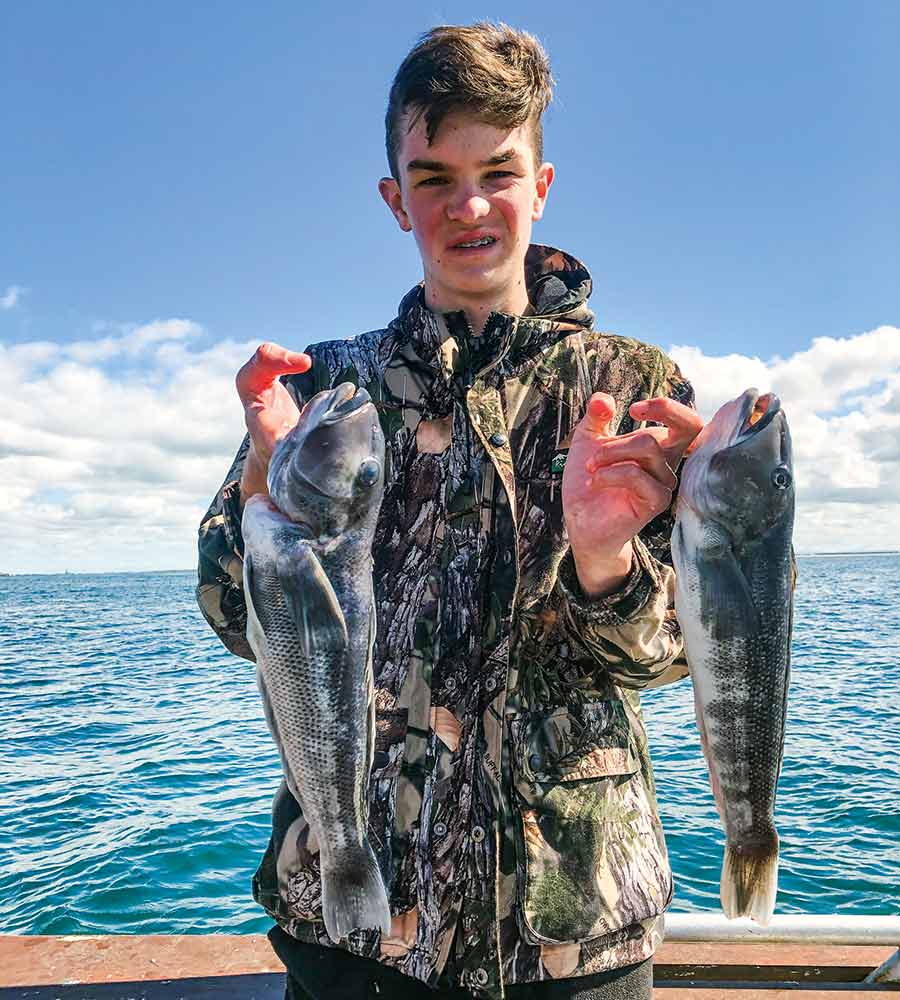 A couple of tasty blue cod caught out from Bluff.

Our next stop was in Te Anau for three nights. In between, there was a lot of sightseeing and we managed to investigate the Waiau River (up near the control gate). This was the first time we saw literally dozens of fish rising late in the evening and early in the morning. But do you think we could hook one?

Again, we leant on the advice of a local tackle store (Frontier Supplies) who pointed out that these fish have lures cast at them day after day after day and very rarely take them. A local angler helped us set up a bubble float rig which provided weight for casting as well as flotation to help present a dry fly fished on our spin sets. Although I spent ages trying to fool big browns with a more traditional fly rod technique, it was eventually Dad on the bubble float rig who got the bite. It certainly wasn’t the biggest fish in the river but for us it was a step in the right direction. Once again though our time was up and we had to hit the road again. A stop in Wanaka proved unsuccessful mostly due to the poor weather.

Twizel was next, and this was the location that I was looking forward to the most. Stories of monster trout and a chance of a salmon really had us amped up. We spent the first afternoon rolling eggs down the Ohau C Canal with no luck. After dinner we went back again and fished through until 11pm, and while we were unsuccessful, there were trout rising constantly all around us and one lucky angler landed a beautiful 20lb rainbow on a soft-bait. Surely it would be our turn soon, although the doubt was starting to creep in and our patience was wearing thin.

The following day we bribed Mum to let us mix our visit to Tekapo with more canal fishing. The scenery around Tekapo was incredible, but the wind was so strong at times on the exposed canal we could barely stand up, let alone fish! Fortunately, by the time we got back to Twizel and had dinner, the wind had eased and our spot on the Ohau C Canal had a lovely little flow on it – one thing that everyone told us was crucial to success. We fished that evening using every technique we had learnt on our trip so far. We rolled eggs, floated flies, cast spinners and even tried shrimp for bait. Just as the light faded, I changed to a Pink Savage Gear Pro Grubb in one last ditch effort to get a bite. I had read about these being particularly effective on salmon through winter and hoped that it could do the damage on a fish for us now.

On literally my last cast after two days of effort with not even a bump, a fish hit my lure! I recall being so excited, but so nervous about losing it, that I played it on a very light drag and took my time to subdue the feisty little fish. I eventually landed my first salmon and I was absolutely rapt! Had it been a trout we would’ve released it, but if we told Mum we had released a salmon I think she would have doubted whether we’d even caught one. So, the salmon got packed on ice and came home to Tauranga as carry-on luggage!

Although we may have missed a window out of Whakatane for a yellowfin, in hindsight the trip south was pretty damn wicked, and was an absolutely huge learning experience for me. Now I can’t wait to go back! 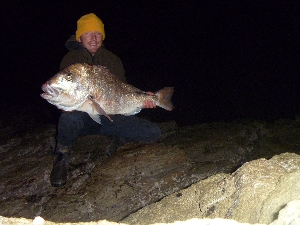