While a full day out on the water may have optimum appeal, sometimes time and circumstance do not allow such freedoms. Josh Coombridge often finds himself in this situation, whether it be due to work or family, and has to squeeze in a fishing opportunity when it presents itself…

Shift work is a blessing for keen fishers. It means on any given day I’ve got a few hours up my sleeve to do things – like go to the dentist, get the car serviced, or ideally, take the boat out for a quick fish. However, the question I find my myself asking myself is, “Will it be worth it?”

Is it possible to head out after work or for a couple of hours in the morning while the rest of the family are busy? Trips out wide are always fantastic. Even if the fishing isn’t always great, there are guaranteed amazing sights and sounds to behold. But this isn’t a story of a multiday trip to hit the tuna run, or a dawn till dusk kingie mission in the Far North. This is the story of making the most of what little time we have – short and sharp, in and out.

Monday November 22 dawned warm and windless. I had spent the night before at a Sunday BBQ for my Mum’s birthday, and somewhere between blowing out the candles and watching an episode of Midsomer Murders, Dad and I had sorted a pre-work fishing trip. I spent the remainder of the evening tying FG knots and checking tides and wind. My family are used to this.

We lost a little time fuelling up, but we still had about two hours up our sleeves. We made good time heading to our fishing grounds, and then disaster struck on arrival. As Dad pulled back on the throttle we heard a click, and then the boat wouldn’t go out of gear. The throttle cable had broken. The last time this happened to me I was idling my two-wheeler motorbike to the neighbour’s house to do some work for him. I pushed my bike back home, told the neighbour I wasn’t making it to work, and sold the motorbike still broken. Despite disaster striking on an early morning mission, Josh and his dad still managed to land a feed and fix the motor.

It was at this point I realised that could’ve been a great chance to learn how to get myself out of my current predicament! I was completely useless in this situation, but Dad (to the rescue!) got busy leaning off the stern. After a few minutes he had the problem under control and we were into some fishing. Once the drama of the broken throttle had died down, and heart rates had returned to a normal BPM, Dad dropped a knife jig. Lifting it off the bottom, he was into a fish right away. 32cm and it was staying – we had less than two hours now, and we were fishing for dinner. I cast a slow pitch lure out behind the boat and also hooked into another pannie.

To say it was every drop would be lying – as the tide rise to full, the fishing slowed right down, but we were still picking up a few fish. Dad caught one or two more on some old bait that he’d brought out and with that, we had a feed. Two hours flies by when you are on the water. It was still morning and we’d caught five fish, fixed the motor, and made some great memories. Now all we had to do was go to work!

While we didn’t get any trophy fish on this trip, we got a solid feed for our families, and I got to make some awesome memories with my Dad. When I think back, most of my trips before or after work have not resulted in XXL fish, so if that’s what you’re after, then maybe it is best to leave the fishing for when you’ve got all day to commit. But, if getting out on the moana, using your boat, honing your skills, or just hanging out with your whanau catching some food are things you enjoy, then the short and sharp trips are totally worth it!

I went after work towards the end of last year with a good friend. We both knocked off around four and had to be back for dinner by 7:30pm. It was going to be tight. We lost more time at the ramp – there was too much swell, so we shot over the hill to the next ramp, and went with plan B. A quick 10-minute trip later and I just happened to slow down as we started to come through some current at the edge of Tiritiri Matangi Island. The sounder lit up, indicating some good fish right through the water column. I dropped a knife jig and I could feel it getting bashed from side to side, even on the way down. My mate George dropped his Slider while I was already bringing up a nice sized pannie, and then his little soft-bait reel start to whiz, resulting in a nice 10lb fish. We even got home for dinner that evening, even if I was still wearing jandals at the restaurant. Lucky we live in NZ. George and Josh had to be back for dinner at 7:30pm, but only launched the boat after work. Despite the time restraints, George still landed this solid snap.

When it comes to these shorter trips, I never look at bite times. The bite times inevitably suggest fishing at a different time than what your schedule allows. This is depressing at best and at worst, an excuse to sleep in or stay at home and watch Netflix. This is certainly not the first time this line has been written in NZ Fishing News, but you can still catch fish outside of bite times. Wow. Game changing.

I’m not a superstitious man but I have also decided to stop promising my wife fish for dinner. If you say to the flatmates, “Yeah we’re having fish tonight for sure!” you best believe you’ll be buying that fish from Countdown on the sad drive home.

Another “don’t” when it comes to a short and sharp fishing trip is overcomplicating things. This is not the trip to take out eight rods, your diving gear, and the dog. Commit to one pursuit. I’d suggest using lures or soft-baits so you can get completely rigged up the night before, and it means your hands wont stink of bait when you eventually rock up at work or get along to that dinner you’d committed to attending.

You want to maximise the time you have a line in the water, so when I head out, I make sure I have everything ready the night before – rods in the car, full petrol tanks and I even put water in the jug the night before so I don’t waste 10 seconds when making my essential instant Nescafe to kickstart my trip. Tie your knots, lay out your clothes and finally, don’t spend too long on the bog. 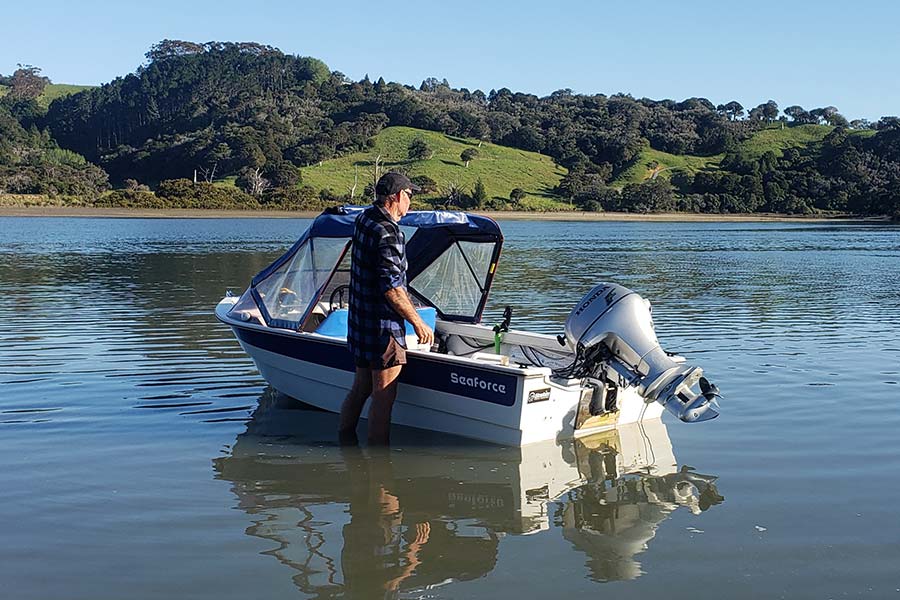 Small boats come into their own when time is of the essence.

After you’re home, depending on the remaining time before your next appointment, I have a few time saving hacks as well, although some people may disagree with me here.

The first is that clean up can wait a day. Controversial, I know, but I figure a thorough clean the day after when I have time is better than a rushed one straight away. I usually just quickly do the motor on the day. My trailer and boat are often left and are classified “future Josh’s problem”.

Getting the guts out of the fish is a must. If you have a good chilly bin, gut your fish on the way home, and then leave them in the bin – they will be fine on ice without guts for a day. Personally, I like to go a step further and fillet them but leave the skinning and boning for another time. My dog Scout is extremely disappointed when I do this – he loves eating snapper skins!

I realise that the idea of rushing out to the boat ramp before or after work, catching a few just legal pannies, boosting home and then rushing to the next thing may not be you cup of tea. I have been very stressed a few times that I would be late for a meeting and more than a few times showed up to work smelling somewhat dubious.

However, if you wake up in the morning, look out at the dead still trees and you’ve got a few hours up your sleeve, why not take the chance? There are adventures to be had, and if my experience is anything to go by, waiting for the weekend will only result in crap weather, a queue at the boat ramp, or both. My advice is to go for it and see how you get on! You won’t catch anything just sitting at home.

in The Briny Bar
57 minutes ago

Hozza about the trailer, shouldn't that be included somewhere or other in the equation ?Is important to get it right as any warrantee can be ruled...

How tp choose the best sunglasses for fishing

Old school ppl just poured these chemicals on without any concern for over spray and concentration and amount ingredient per area.. as I mentioned above... and...

An old bone ivory flip on the back,as display, anyone who is in the 'know' will appreciate it. The come out to cave for a special...

When I go snapper fishing off West Coast, I use a Snapper Catcha Gamakatsu flasher rig, 8/0. I have a rod holder that holds the rod...